“If Mr. Gambard [sic. Gambart] comes to the gallery, will you have the goodness to give him the accompanying drawing and the note directed to him. I had nothing to send but the above drawing which belongs to Mr. Gambard & I should not like it to be exhibited unless Mr. Gambard wishes it… Fith [?] of drawing The Pastoral Valley Samuel Palmer 6 Donro Place, Victoria Road, Kensington”

A self-taught artist, Palmer was greatly influenced by the works of William Blake, after being introduced to the artist in 1824. Together with artists George Richmond and Edward Calvert, dubbed “The Ancients,” Palmer lived in a cottage in the Kent village of Shoreham nicknamed “Rat Abbey” and met regularly with Blake, at what his acolytes called the “House of the Interpreter.” The Ancients were the first artistic brotherhood in England, a forerunner of such examples as the Pre-Raphaelite Brotherhood. Many of Palmer’s works from this period were inspired by his nighttime strolls with fellow “Ancients” through the Darent Valley which he referred to as the “Valley of Vision.” By the mid-1830s, Palmer had moved to London, eschewing his mystical and idealistic portrayals of the English countryside for more conventional and commercially viable scenes. He found critical success with such watercolors as The Lonely Tower (1879) and A Dream in the Apennine (c.1864), for his watercolor illustrations published with John Milton’s poems L’Allegro and Il Penseroso and for his published etchings. 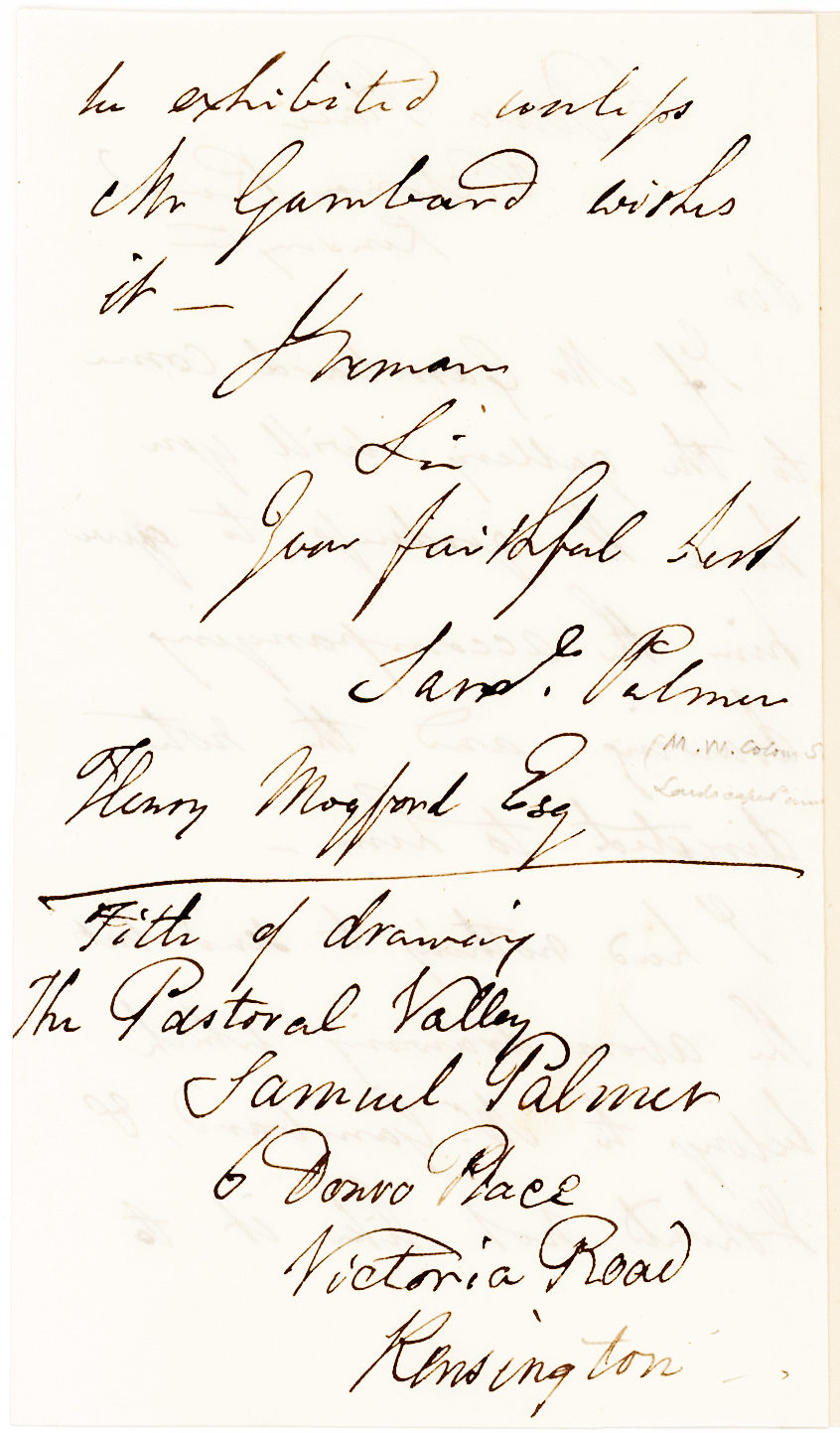 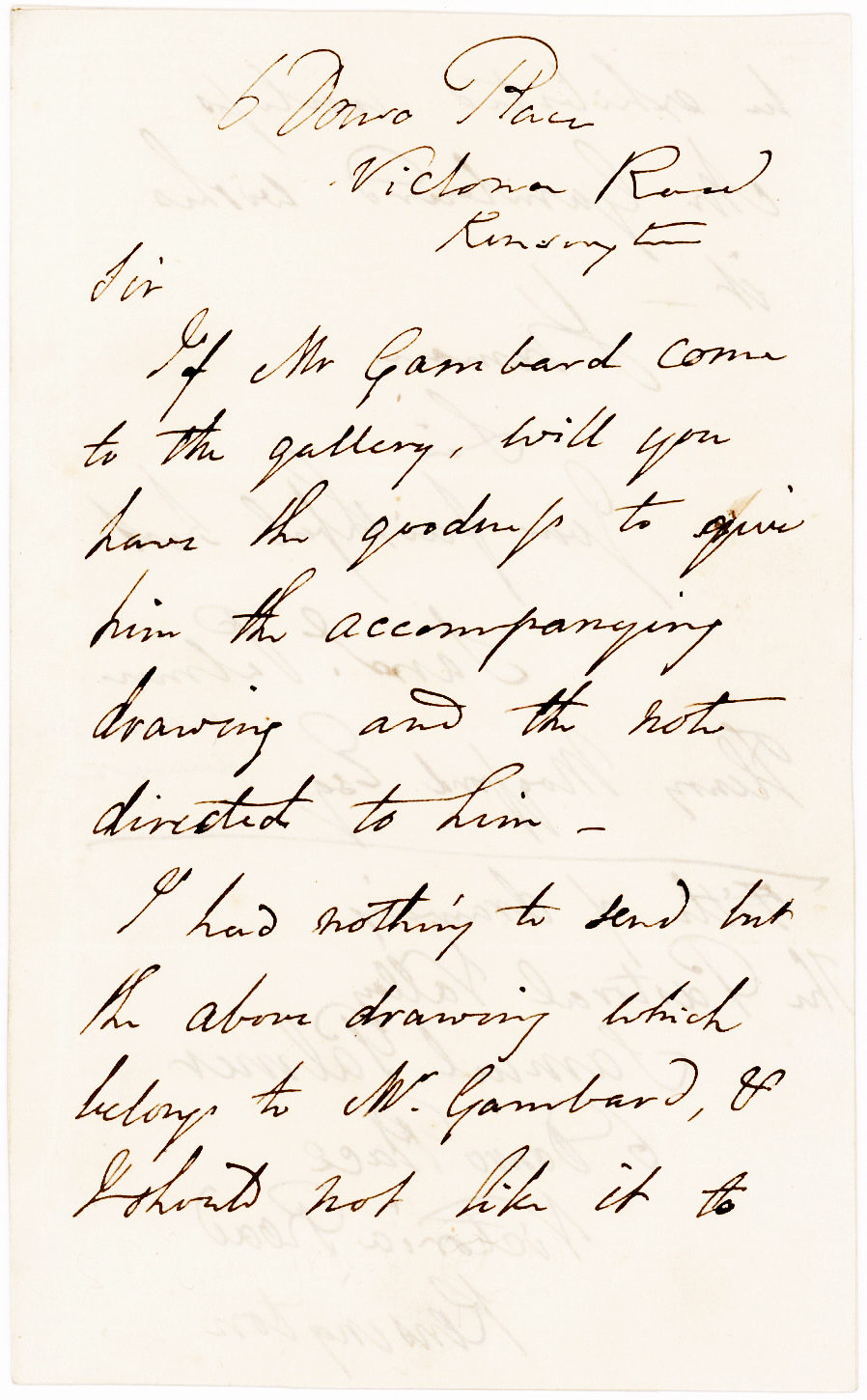 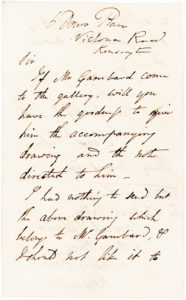 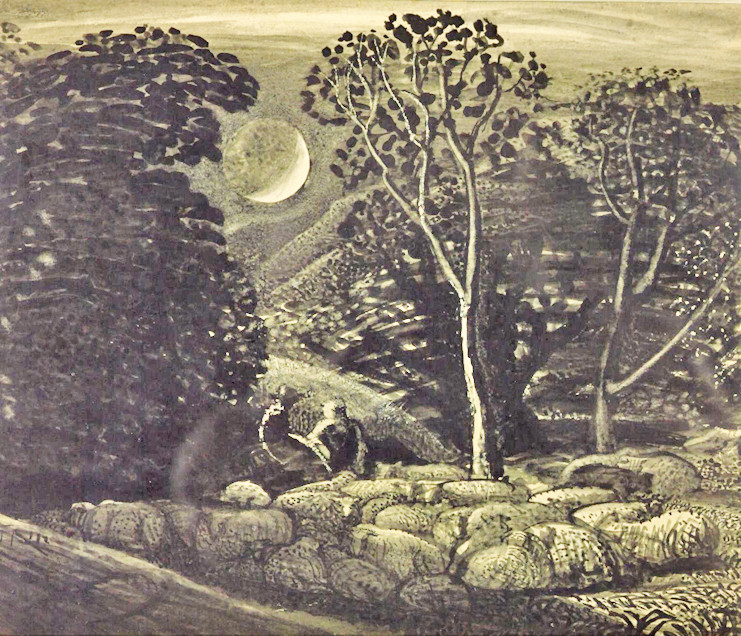 Mogford, our letter’s recipient, exhibited his watercolors at the Royal Academy and at the Society of Artists and his drawings appeared in the 1848 volume Baronial Halls & Picturesque Edifices of England. He was an authority on picture restoration, authoring the popular Hand-book for the Preservation of Pictures containing practical instructions for cleaning, lining, repairing, restoring, and preserving Oil Paintings in 1845, and also helped campaign against the sale of fictitious old masters and expose London art forgers. Mogford exhibited his own work in Brussels and wrote about Belgian art for Art Journal. By 1845, he was secretary to the Belgian expatriate art publisher and dealer, Ernest Gambart (1814-1902), mentioned in our letter. Gambart published fine art prints of all the major artists of his day including Dante Gabriel Rossetti, J.M.W. Turner, John Everett Millais, Edwin Landseer, William Holman Hunt, and Lawrence Alma-Tadema, the Dutch painter whose career Gambart is credited with launching with an 1865 London exhibit. In 1849, Gambart began dealing in original art and was one of the leading dealers in Victorian London.

Written on the recto and verso of a sheet that has been tipped onto a stiff sheet of paper along the left edge with a resulting crease and nominal wear. In very fine condition and rare. 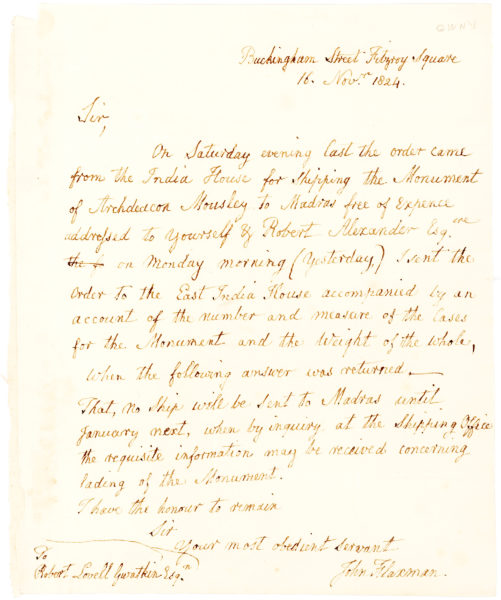