“Sixteen years have passed since the death of your dear husband, Dr. Chaim Arlozorov, of blessed memory. Now, with the establishment of the State, his absence is that much harder for us, particularly as we have been robbed of his advice, his wisdom and the enlightening inspiration of one of the most brilliant and intelligent of our young leaders. The best way to honor his memory is to continue and to complete the Zionist enterprise to which your husband dedicated his life. Sincerely and with admiration … cc: Speaker of the Knesset Mr. Yosef Sprinzak” 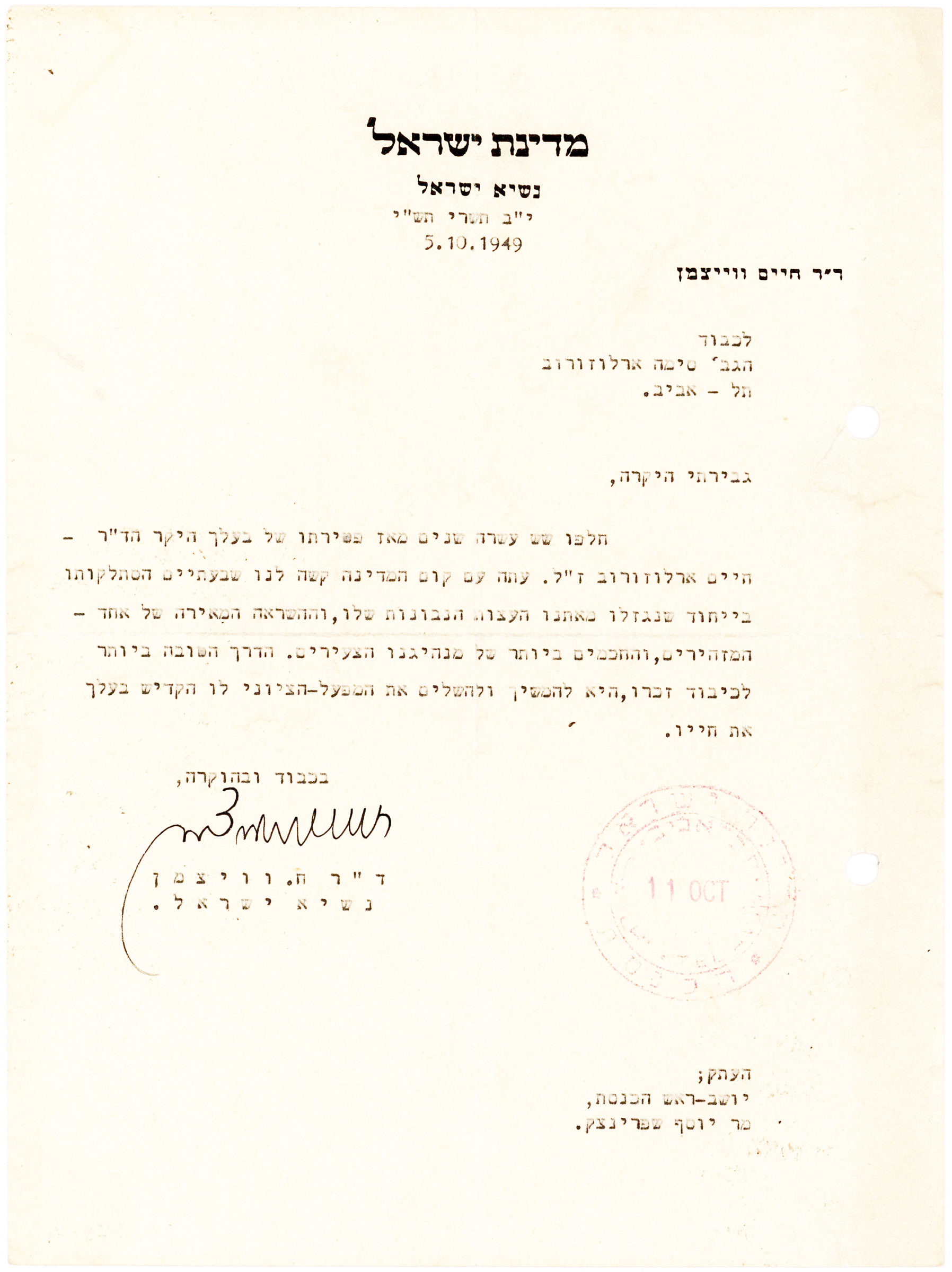 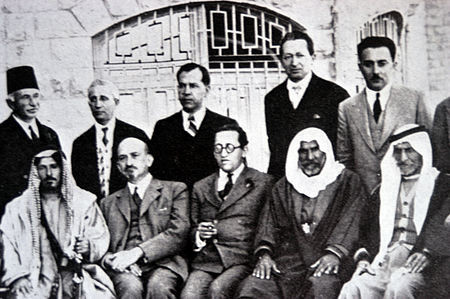 Haim Arlozorov (center with glasses) seated next to Chaim Weizmann, 1933

After teaching chemistry at the University of Geneva, Weizmann immigrated to England where he accepted a position at Manchester University. While there, he gathered together a group of Zionists that came to be known as the Manchester School and whose main purpose was to disseminate information about Zionism through the publication of pamphlets, books and newspaper articles. Weizmann was instrumental in convincing the British cabinet to support a Jewish settlement in Palestine.

Palestine had been part of the Ottoman Empire since the 15th century but, in December 1917, the British captured Jerusalem during their Sinai and Palestine Campaign, gaining northern Palestine the following year. After the war and a period of military occupation, the League of Nations established the British Mandate for Palestine lasting from 1923 to 1948, when the modern state of Israel was born. Weizmann became Israel’s first president on February 16, 1949, a position he held until his death three years later.

When a violent pogrom forced the Arlozorov family from their home in Ukraine, they settled in Germany where Haim became a prominent Zionist and penned an influential 1919 treatise entitled, “Jewish People’s Socialism.” He immigrated to the British Mandate of Palestine in 1924 and represented the fledgling state at the League of Nations beginning in 1926. Arlozorov was a political moderate who believed in reducing tensions with the Arabs and working with the British government to make a Jewish state a reality. In 1930, he led the unification of two political parties, the Poale Zion and the Hapoel Hatzair, to form the Mapai Labor Party, of which his friend Weizmann was a member. He also headed the Jewish Agency for Palestine.

In June 1933, Arlozorov helped conclude an extraordinary transfer agreement (heskem haavara) with Nazi officials to release the property of German Jews who were immigrating to Palestine, a measure strongly opposed by the rightwing Brit HaBirionim faction of the Revisionist Zionist Movement. Two days after his return to Palestine, Arlozorov and his wife, Sima, were walking on a Tel Aviv beach when they were confronted by two men, one of whom drew a gun and shot Haim. He died the following morning on June 17, 1933. His funeral, the largest in the history of the British Mandate of Palestine, was attended by an estimated 100,000 mourners. Sima’s description of the suspects led to the arrest and trial of Ze’evi Rosenblatt and Abraham Stavsky, members of Brit HaBirionim. Brit HaBirionim countered that the attack was perpetrated by Arabs and that the police investigation into Brit HaBirionim members was political in nature. The accusations on both sides greatly enflamed tensions within the Zionist movement. All suspects were ultimately acquitted for a lack of evidence and the murderers true identity has never been ascertained. Nevertheless, the assassination was notable for highlighting political divisions in pre-state Israel which reverberated even after its 1948 founding.

Incidentally, Stavsky later rose within the ranks of the paramilitary Irgun (IZL) and was one of the organizers of the shipment of arms smuggled from France to Israel aboard the cargo ship Altalena. During the resulting Altalena Affair, the violent confrontation in June 1948 between the newly established Israel Defense Forces and the Irgun, Stavsky was killed.

Folded into quarters with a purple ink date stamp in the lower right quadrant. Two file holes, not affecting the writing are in the right margin. In very good condition and an historic document from the early days of the nation of Israel. Weizmann letters from this period, particularly during his first year as Israel’s first president and with this association, are scarce.