In 1897, Theodor Herzl organized the first of five annual Zionist Congresses to bring together Jewish leaders from around the world determined to establish a Jewish homeland. From 1903-1913 and 1921-1939, meetings were convened every other year. The Twelfth Zionist Congress was the first following the 1917 Balfour Declaration that declared British support for a Jewish state, and after the conclusion of World War I. In April of 1920, the League of Nations granted a British mandate over Palestine and Transjordan, making it the subject of much discussion during the Zionist Congress, which passed resolutions of support and urged ratification by the League of Nations. The 1920-1921 Arab unrest in Jerusalem and Jaffa prompted the congress to declare that Zionism sought to respect and live in harmony with the Arab people.

This unique memento from the Twelfth Zionist Congress is signed in Hebrew and English by 11 prominent participants, including: 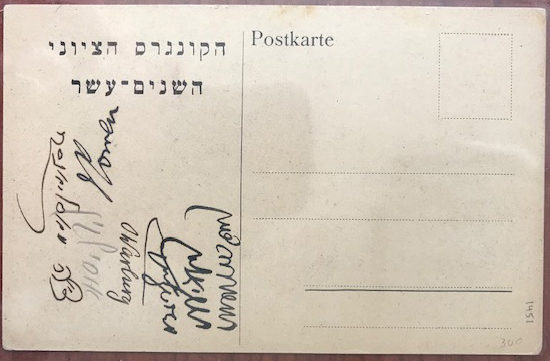 LEON (ARYE LEIB) MOTZKIN (1867-1933). Born in the Ukraine, Motzkin studied in Berlin but “was diverted from what might have been a brilliant academic career by becoming immersed in Zionist affairs as a student. One of the outstanding Russian delegates to the First Zionist Congress in 1897, he was sent by Herzl on a mission to Palestine to report on the condition of the Jewish agricultural settlements,” (Who’s Who in Jewish History, ed. Comay). Motzkin acted as Weizmann’s mentor and after World War I was a member of the Zionist delegation to the Paris Peace Conference, where he exerted considerable influence. He was elected to the Zionist Executive in 1921, leading the body during the Twelfth Zionist Congress serving as president of several subsequent congresses. Throughout his career, Motzkin advocated for the Hebrew language and culture as well as a championing “Jewish minority rights in Europe. From 1905 onwards, he carried out intensive research on the history of Jewish pogroms in Russia, and in 1910 published a two-volume work on the subject,” (ibid.). He also sought to win American support for Russian Jews and for the Zionist cause.

DAVID YELLIN (1864-1941), a vice-chairman of the Twelfth Congress, Yellin, born in Jerusalem, was a language teacher and founder of the Assembly of the Land of Israel, the first Hebrew College for Teachers, Israel Teachers Union and Jerusalem’s Zikhron Moshe neighborhood. Yellin had been at the center of the 1913 controversy regarding the official language of Jews living in Ottoman Palestine. Exiled during World War I, he returned to Mandatory Palestine and later elected to the Assembly of Representatives. Yellin became an instructor at Hebrew University and authored numerous books on the Hebrew language.

NACHUM SOKOLOW (1859-1936). A Polish-born Zionist, Sokolow became a prominent Warsaw journalist before his election as secretary general of the Zionist Organization and moving to London to assist Weizmann in 1914. An outspoken proponent of the Balfour Declaration, Sokolow served as the WZO’s president from 1931-1935 and president of the Jewish Agency for Palestine. Sokolow was also a well-regarded linguist who translated works by Theodor Herzl and Baruch Spinoza.

JOSEPH BUDKO (1888-1940). A Polish artist who studied under Hermann Struck in Germany, Budko developed a unique style of engraving drawn from Jewish culture that influenced the work of Marc Chagall. His woodcuts illustrated the works of Heinrich Heine, Sholem Asch, Arno Nadel, and others. Our postcard, printed to commemorate the congress, reproduces Budko’s illustration entitled Leid und Hoffnung (Suffering and Hope), and bears a Hebrew inscription that reads: “Not by might, nor by power, but by my Spirit, says the Lord of hosts,” a passage from the book of Zechariah 4:6. “The 12th Zionist Congress” appears in Hebrew on the verso.

JOSEPH COWEN (1868-1932, “J Cowen”). A founder of the British Zionist Federation who accompanied Herzl to meet with the Ottoman sultan in Constantinople in 1902, Cowen led the Jewish Chronicle, giving it a Zionist slant. He served on the 1918 Zionist Commission to Palestine and, beginning in 1921, was a member of the Zionist Executive.

ZVI HIRSH MASLIANSKY (1856-1943). Masliansky counted Weizmann among his pupils while teaching at a yeshiva in Belarus, and became an active Zionist following the pogroms of 1881. He used his impressive oratorical skills to obtain support for the Zionist cause throughout Europe, and in 1895, he emigrated to the United States where, during his weekly sermons, he popularized Zionism among New York City’s Yiddish-speaking population. Renowned as an eloquent Yiddish “maggid,” Masliansky published sermons and articles in the Yiddish press.

MENACHIM USSISHKIN. (1863-1941). Born in the Russian Empire, Ussishkin, prompted by the waves of anti-Semitic pogroms that swept through Russia in the 1880s, was one of the founders of Bilu, whose goal was the agricultural settlement of Palestine. After serving as secretary of the First Zionist Congress, he vigorously opposed Herzl’s plan to establish a Jewish homeland in Uganda. Ussishkin fled the 1917 Russian Revolution for London and became a delegate to the Paris Peace Conference. He made his Aliyah to Palestine in 1919, where he quickly became head of the Zionist Commission in Palestine. From 1923 until his death, Ussishkin led the Jewish National Fund during which time he acquired major tracts of land for Eretz Yisrael.

WARBURG, OTTO. (1883-1970, “O. Warburg”). German botanist, pioneer and president of the Zionist Organization from 1911 to 1921. “A member of the wealthy and assimilated Hamburg banking family, Warburg became a distinguished professor of botany and an advisor on German colonial settlement. In the Zionist Organization his interests lay in practical Jewish settlement rather than in political activity,” (ibid.). Warburg was cofounder of the Palestine Land Development Corporation, Tel Aviv’s Agricultural Experimental Station (later the Institute of Agriculture and Natural History) and the National Botanic Garden of Israel at Hebrew University. He served as president of the Twelfth Zionist Congress.

MOSHE (SHERTOK) SHARETT (1894-1965). Sharett’s family emigrated from Russia to Palestine when he was a boy and where they were among the earliest settlers of Tel Aviv. He met Yitzhak Ben-Zvi and David Ben Gurion while attending Istanbul University. After serving in World War I, Sharett studied at London’s School of Economics and met Weizmann, becoming active in politics, and assuming the leadership of the political department of the Jewish Agency for Israel after Haim Arlosoroff’s assassination in 1933. He was one of the signatories of Israel’s Declaration of Independence and served as minister of foreign affairs from 1948-1956 as well as the young nation’s second prime minister from 1954-1955.

CHAIM NACHMAN BIALIK (1873-1934). A famed Russian-Jewish poet, Bialik wrote the poem “Michrae Zion” (“The Convocation of Zion”) which opened the First Zionist Congress. Over the course of his distinguished career, he established the secret Zionist society Nezach Israel, founded a several Hebrew publishing houses, chronicled the Russian pogroms in his poem “Be-Ir ha Haregah” (“In the City of Slaughter”), and headed the Hebrew Language Association and the Hebrew Writers Association. In 1921, Bialik, with several other Hebrew writers, left Russia, founding the Dvir Publishing House in Germany, which he moved to Palestine in 1924. During the 1920s and 1930s, he traveled extensively, lecturing about Zionism and Hebrew literature. As a poet, publisher and lecturer, Bialik “succeeded in freeing the Hebrew language from its ornate and rigid biblical and classical forms. He made it a pliable and modern language without breaking its ties with the past,” (ibid).

CHAIM WEIZMANN (1874-1952). Russian born chemist, Zionist leader and first President of Israel. After lecturing on chemistry at the University of Geneva, Weizmann immigrated to England where he accepted a position at Manchester University. While there, he gathered a group of Zionists that came to be known as the Manchester School and whose main purpose was to disseminate information about Zionism through the publication of pamphlets, books and newspaper articles. At the 1927 Congress, Weizmann was reelected head of the World Zionist Organization. He was instrumental in convincing the British cabinet to support a Jewish settlement in Palestine and became Israel’s first president on February 16, 1949, a position he held until his death three years later. In addition to his life-long work on behalf of the creation of the Israeli state, Weizmann made several important contributions to science, including the invention of the acetone-butanol-ethanol fermentation process which produces acetone through fermentation. In 1934, he founded the Weizmann Institute of Science, near his home in Rehovot.

Light browning, but otherwise very fine and most uncommon. 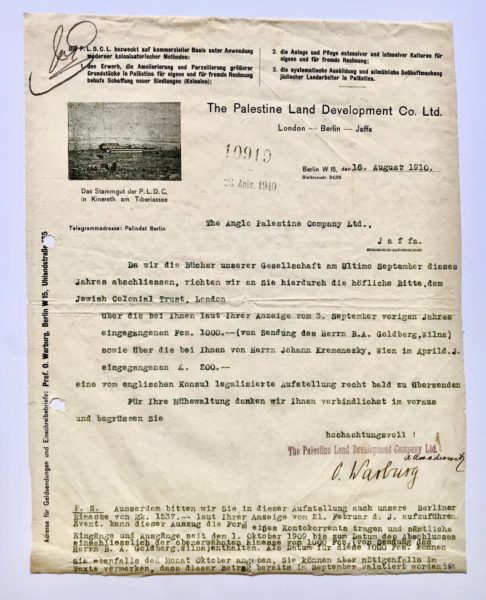