“Your welcome and interesting letter is just received and were it not that I have so much business correspondence to attend to just now (owing to having been so long absent from here) I would write you a letter of a respectable length, but as it is I know you will excuse me. Won’t you?

I presume Helen writes you everything concerning her movements. She will probably return from Harvard about Monday next and remain here a week or two.

I expect to go east again about the 20th inst but am not yet entirely certain that I can spend Christmas at Fulton but hope to be able to do so. Will select your jackey [?] and dress next week and send them by Express to Fulton. I have sent the money to Miss White for your tuition &c. Also sent a check of $20 for you. 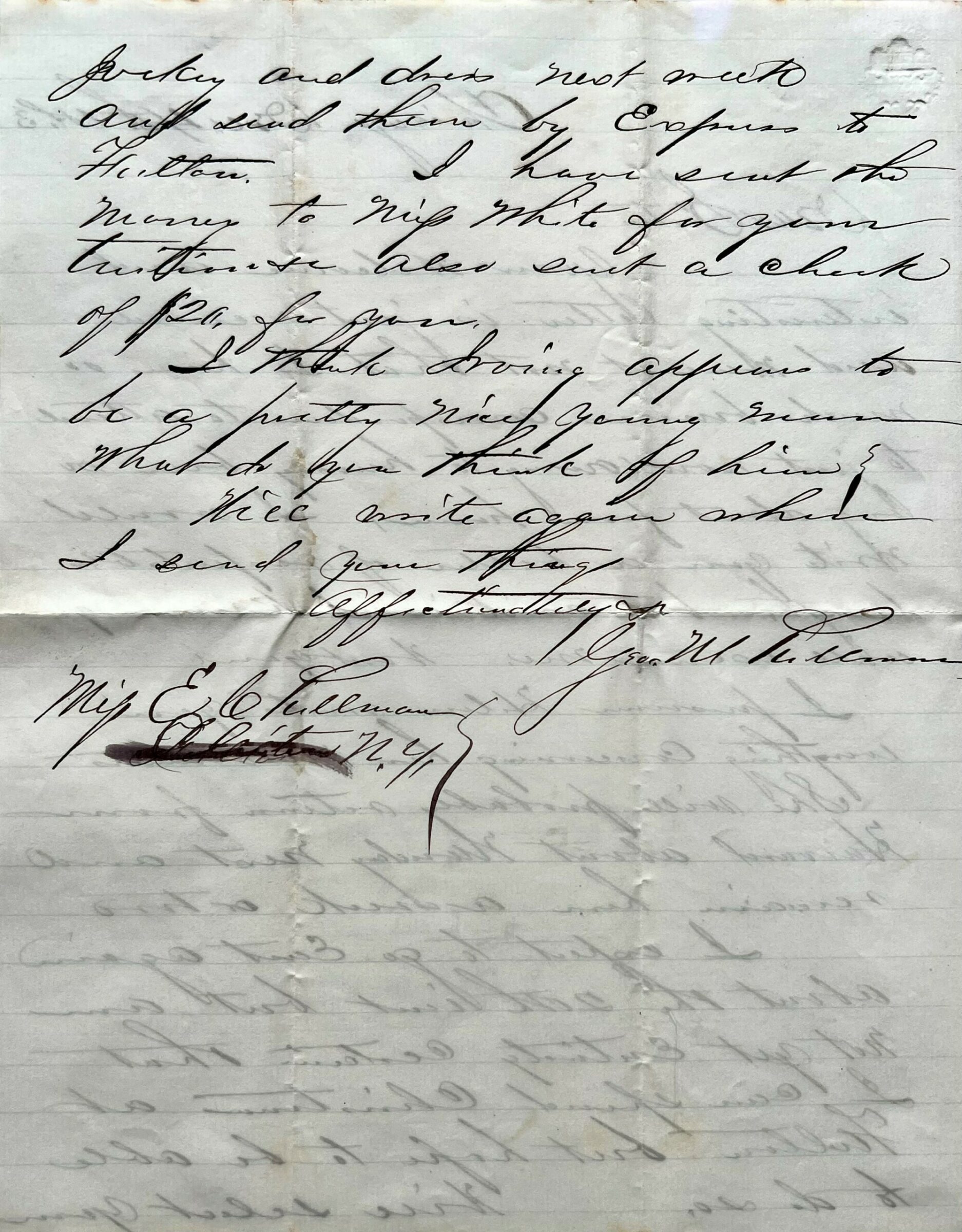 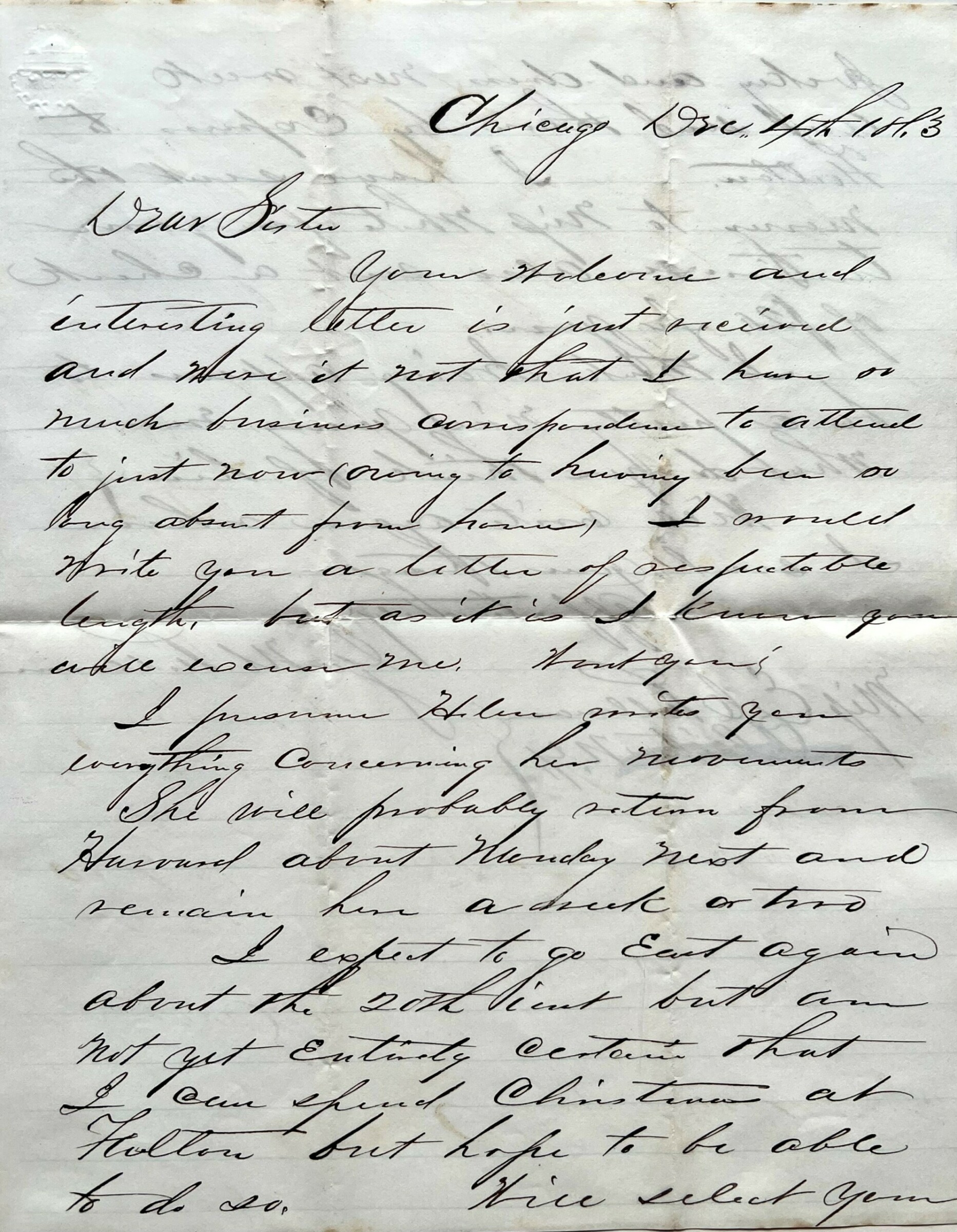 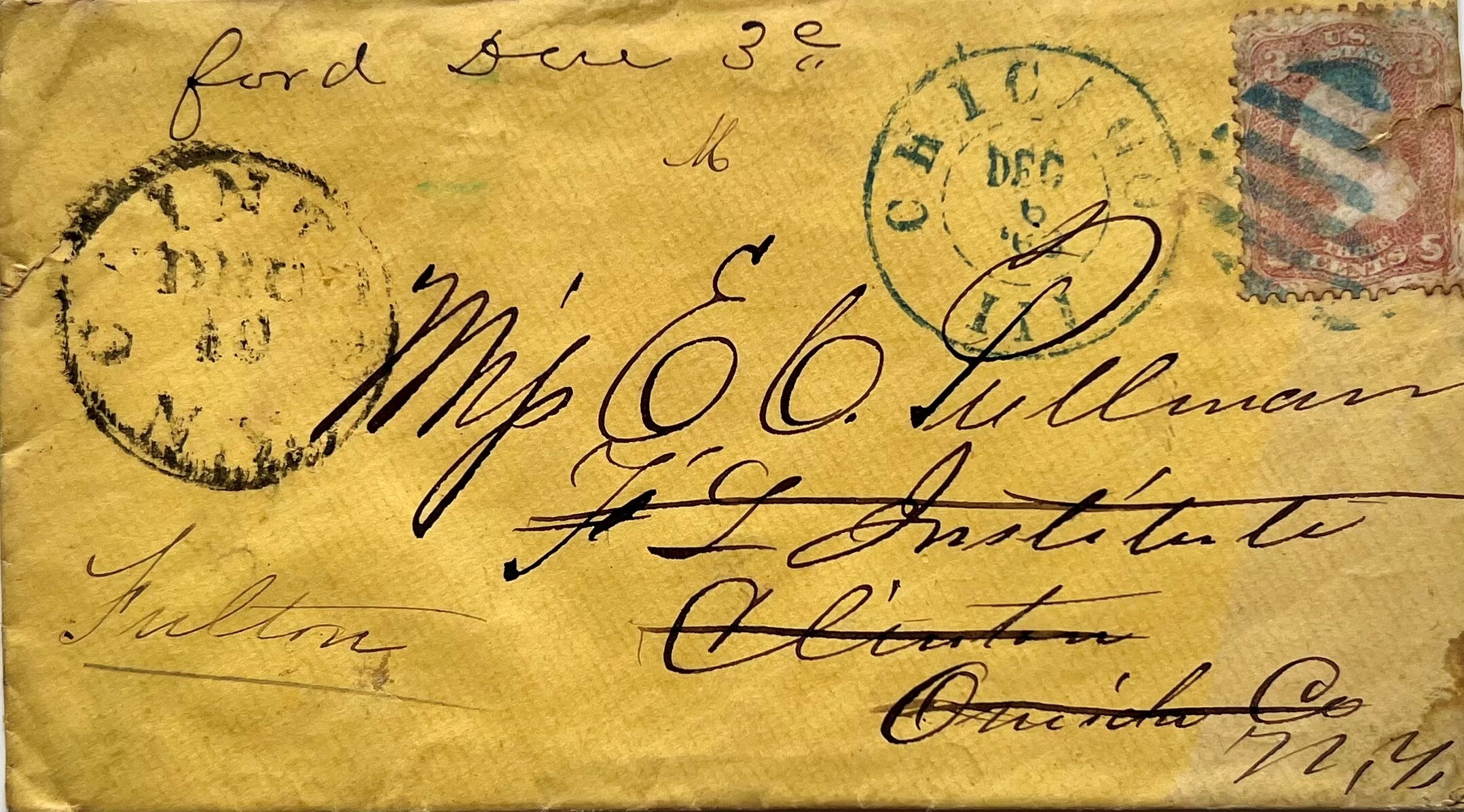 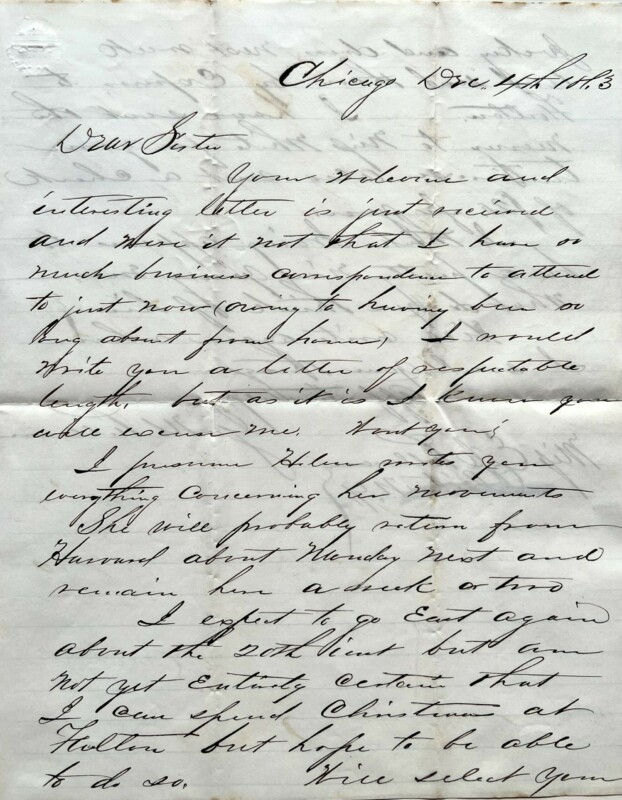 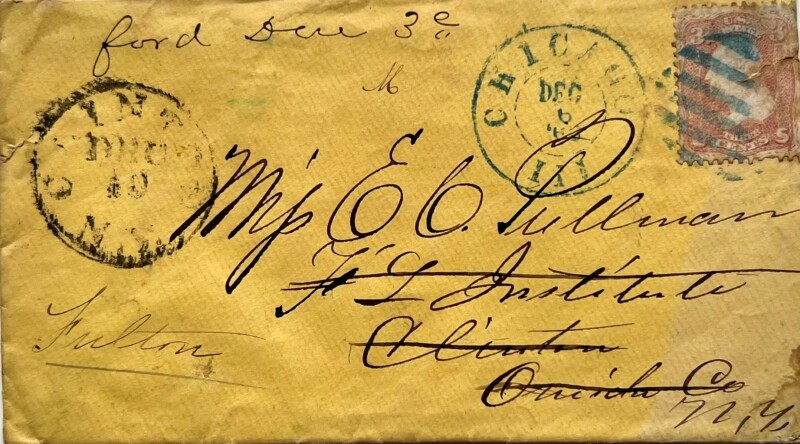 I think Irving appears to be a pretty nice young man. What do you think of him?

Will write again when I send your things. Affectionately…” 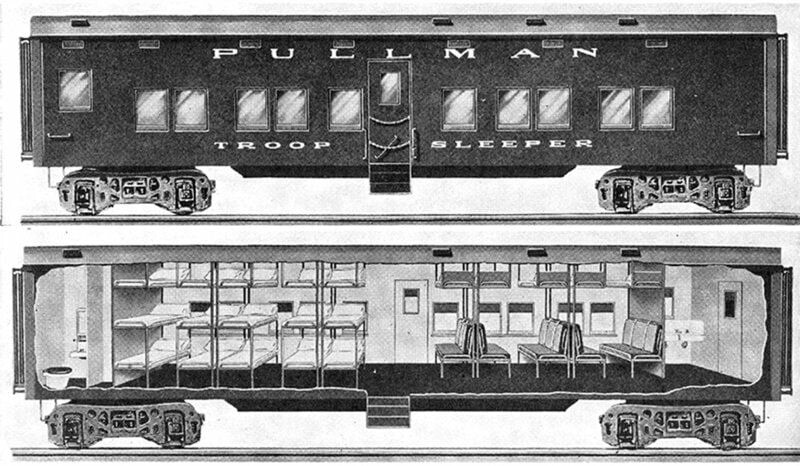 Pullman was the son of a carpenter who had invented a machine to help move buildings out of the way of the widening Erie Canal. After taking over the family business in 1857, Pullman secured a contract with the city of Chicago to raise several multi-story buildings four to six feet to allow the installation of a municipal sewer system.

It is for his development of the Pullman sleeping car, a luxury railway carriage billed as a “hotel on wheels,” that he is best known. The first Pullman car, the President, modeled after the packet boats of the Erie Canal, was unveiled in 1867 and, the following year, he introduced the Delmonico, focused on fine dining, with food prepared by the chefs of New York’s famous Delmonico’s restaurant. Renowned for their first-class service, Pullman cars were staffed by freed African Americans known as Pullman Porters who contributed to the growth of the Black middle class. By acquiring his competitors’ patents and partnering with Andrew Carnegie and others to join the board of the Union Pacific Railroad, Pullman became a dominant force in the railway sector. 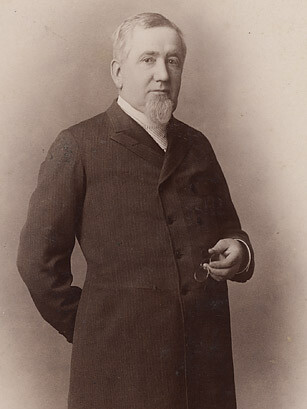 In 1880, he established the company town of Pullman, Chicago, to house the workforce of his adjacent factory, an undertaking which was widely lauded at the time, even though he came to rule the town with an iron fist. On May 12, 1894, his employees, led by Eugene Debs, went on strike after Pullman cut their wages during the Panic of 1893, increased their working hours and refused to reduce rents at his company-owned housing. Pullman paid a typical worker $9.07 a week and charged $9.00 a week for rent. Pullman refused to recognize the unionization of his employees, which, when accompanied by a large boycott, led to massive disruptions in the country’s rail service. President Cleveland dispatched federal troops to suppress the strike leading to the deaths of 30 people, 57 wounded and millions of dollars of property loss. Less than a week after the strike ended, President Cleveland and Congress established Labor Day as a Federal holiday, meant to pacify the labor movement which had been fighting for such recognition for more than a decade. Pullman’s reputation was forever tainted during the ensuing investigation of the strike’s causes and, in 1898, the court ordered the Pullman Company to divest its ownership of the town of Pullman, which became a part of Chicago. The Pullman Company continued to manufacture railway cars until 1982.

Our letter, which also mentions his sister Helen Augusta Pullman (later West, 1843-1911), was written to the youngest of Pullman’s nine siblings, Emma, 15 years his junior, while she attended boarding school in Clinton, New York, likely the Finger Lakes Institute. “During the 19th century, Clinton was widely known for its many private secondary schools, a distinction that earned it the sobriquet, ‘Schooltown.’ For nearly one hundred years, these academies and seminaries met the educational needs of hundreds of students throughout the Northeast,” (“A Brief History of Clinton, Clinton Chamber of Commerce website, https://clintonnychamber.org/our-history/, Munson).

Written on a folded sheet accompanied by the original envelope. In fine condition and rare, particularly in ALSs. 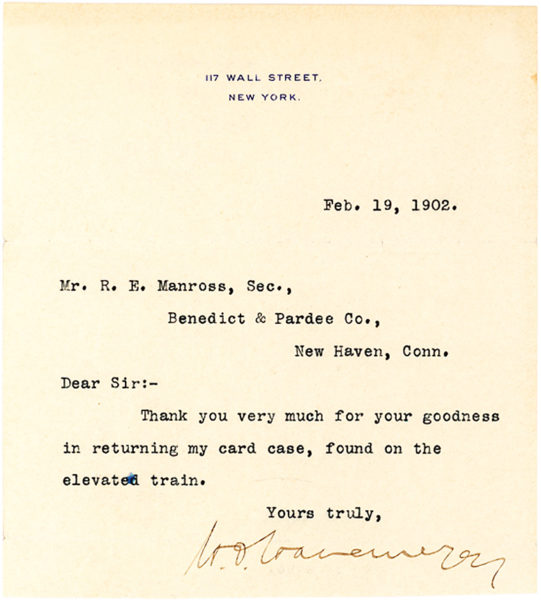 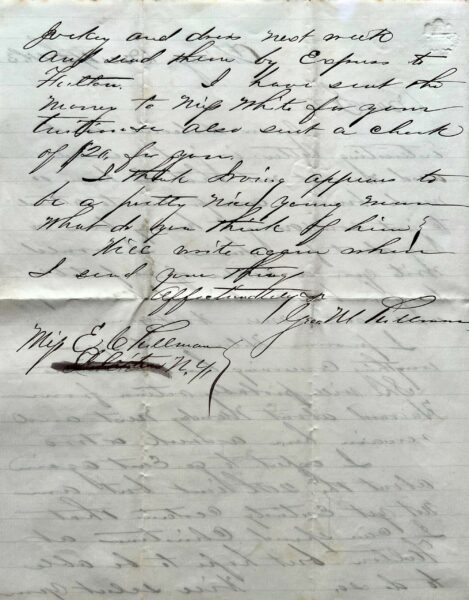 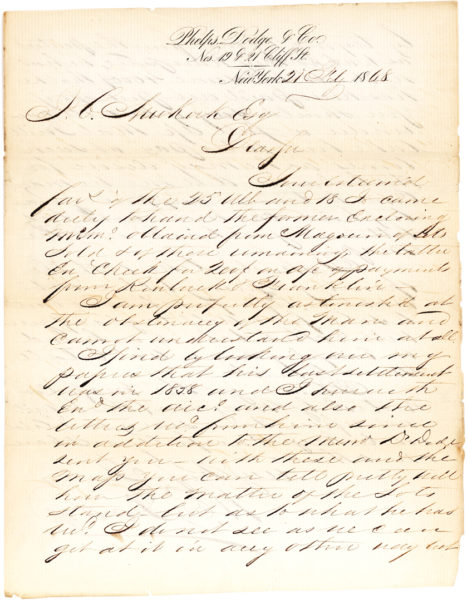