“My main interest in the Civil War period is the Confederacy, its generals and its strategy. Particularly, as a hangover from spending part of my youth in Virginia, the Virginia campaigns, and Generals Lee and Jackson. This is not an exclusive interest, however, for I am not a ‘specialist’ and any phase of the period interests me. My interest began in childhood but only within the past year and a half has it really become my hobby. I have done no writing on the subject. Am particularly interested in collecting books on the field and in visiting the various battlefields and making as intensive a study of each as I can. I had ancestors on both sides. My great grandfather on my father’s side fought with the 11th Michigan through Tennessee. My mother’s father had a brother in each army, one being captured at Vicksburg. The family lived in East Tennessee and evidently was as divided in its loyalties as that section was generally. I would like to obtain photographs of the battlefields in their present state, hoping to make a collection of them eventually.” May 18, 1952 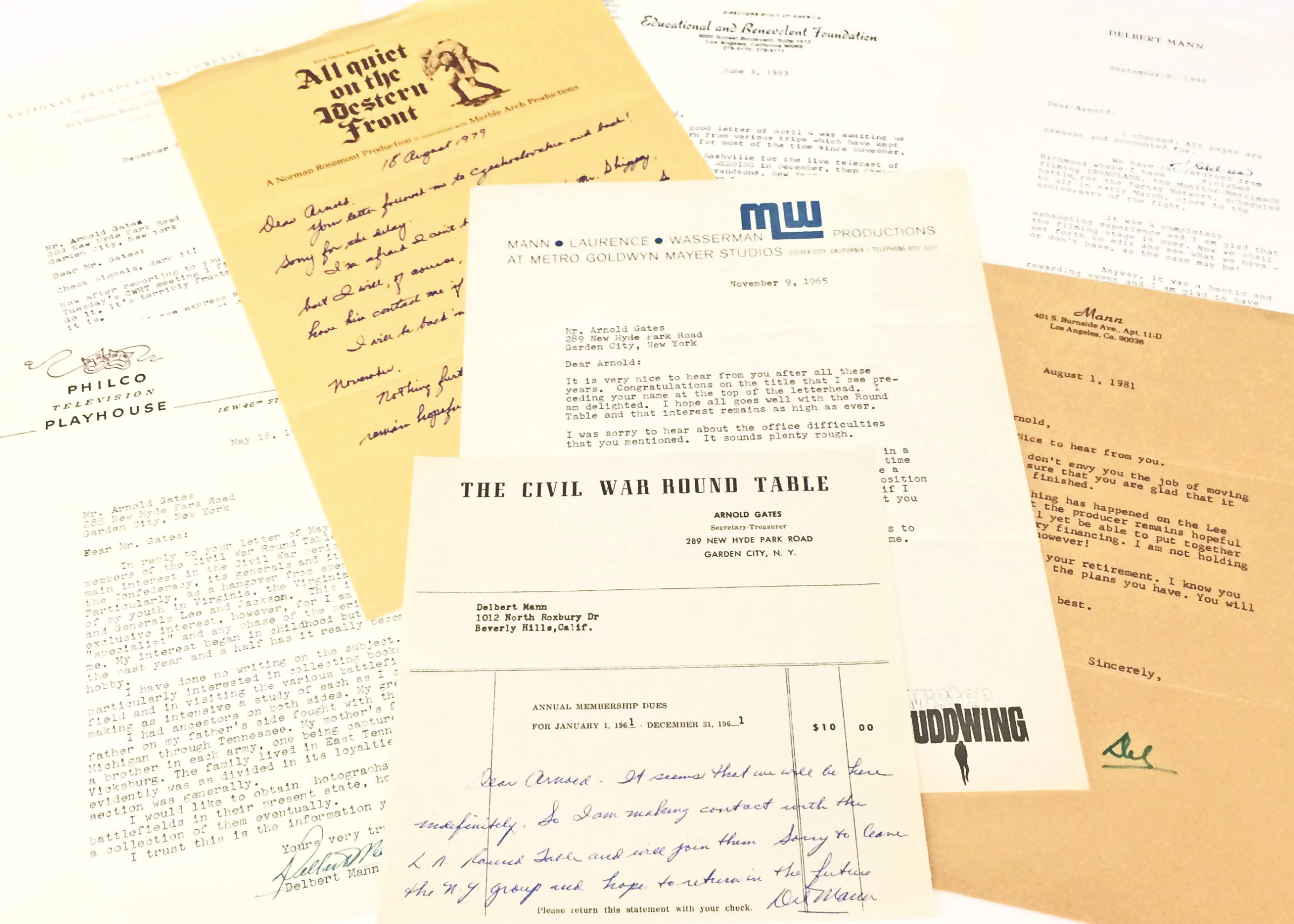 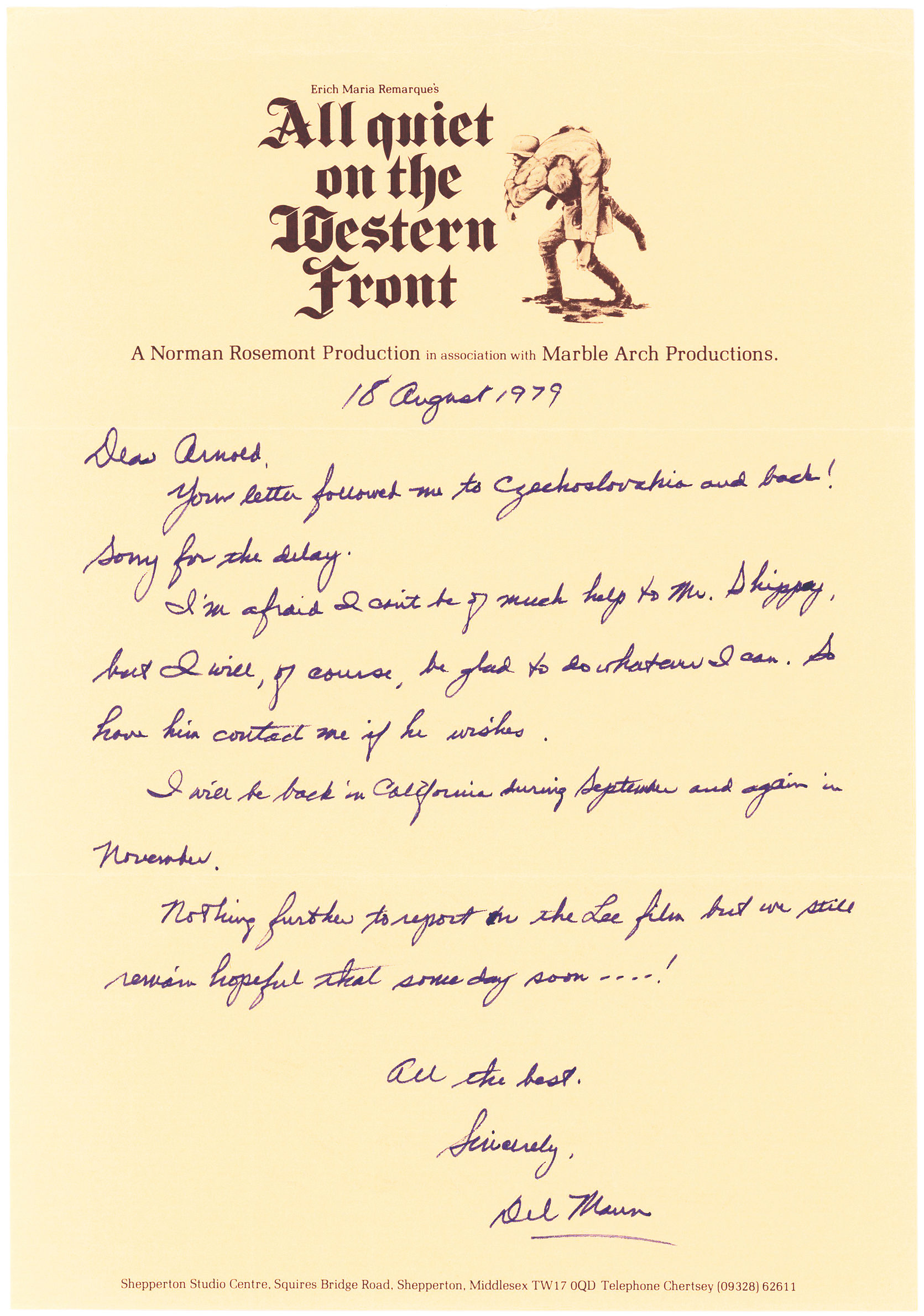 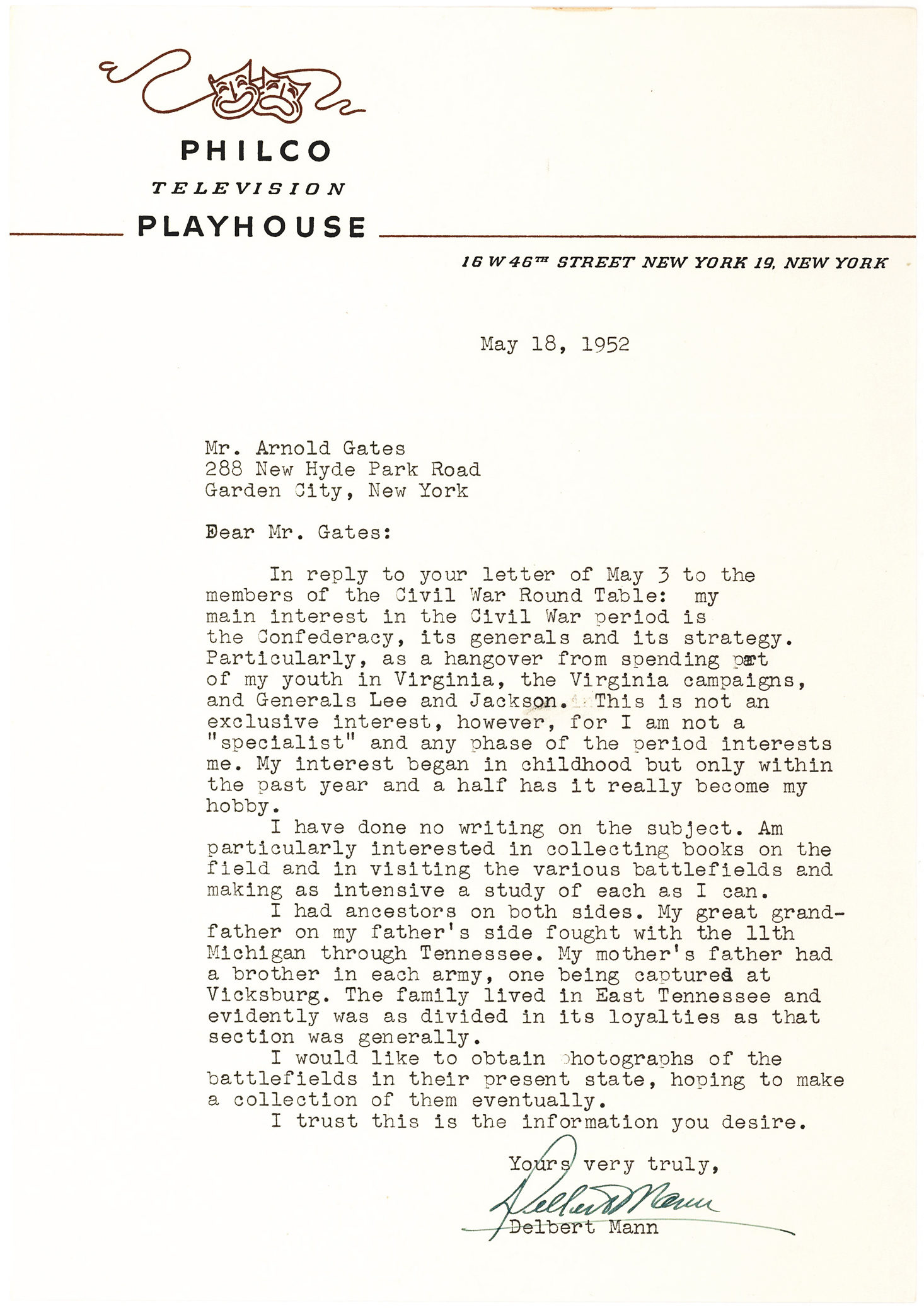 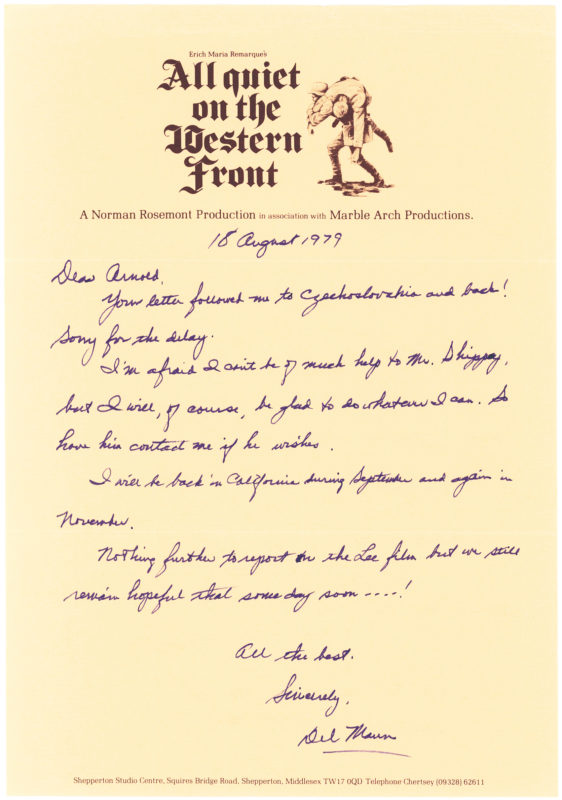 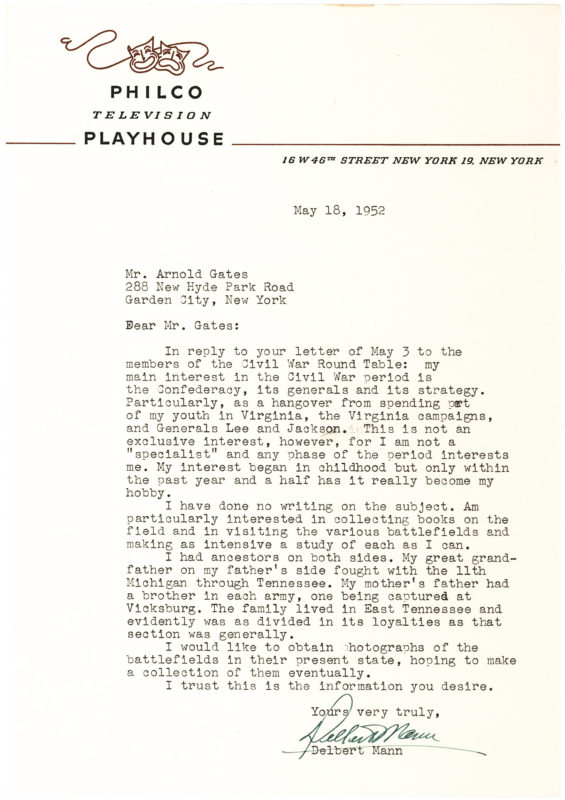 “As to the script that you referred to: I am not in a position to do anything about it at the present time nor can I think of someone who might either have a specific interest in this material or be in a position to use it. However, let me think further, and if I can make some few inquiries, I will do so and let you know.” November 9, 1965

[On illustrated All Quiet on the Western Front illustrated letterhead:] “Your letter followed me to Czechoslovakia and back!… Nothing further to report on the Lee film but we still remain hopeful that someday soon….!”  August 18, 1979

“Nothing has happened on the Lee project but the producer remains hopeful that he will yet be able to put together the necessary financing. I am not holding my breath, however!” August 1, 1981

“Were [sic.] in Nashville for the live telecast of THE MEMBER OF THE WEDDING in December, then Christmas in Hartford with grandsons, New Years in San Jose with other grandson, then to Monte Carlo where I was on the jury of the Television Festival which led to several days travel on the Riviera and southern France, home for three days then to Vermont where I did a CBS Christmas special and finally home about two weeks ago… Out of the blue I heard from North Callahan whom I have not heard from in years. He has a book coming out on Peggy Shippen Arnold. Sounds most interesting. Still trying to put together a production of Fast’s APRIL MORNING and something on Robert E. Lee but both are proving most difficult in today’s market…” June 3, 1983

“We have jst (Rebel-ese) returned from filming IRONCLADS, the Monitor-Merrimack battle, for the Turner Network, scheduled to air in early March, close to the anniversary of the fight. It was a completely exhausting experience and I am glad that the filming stage is over. Now we shall set forth to edit and see what we have – or don’t have, as the case may be!” September 8, 1990 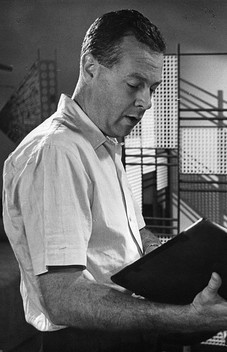 After serving in World War II, attending Yale School of Drama and Columbia, South Carolina’s Town Theatre, Mann moved to New York to work in television at the urging of his high school friend and mentor Fred Coe, producer of NBC’s esteemed Philco Television Playhouse. During the series’ heyday, Mann directed more than 100 television dramas before moving into film. Among the films he directed for television and the big screen are Marty [for which he won an Oscar as Best Director], The Bachelor Party, A Gathering of Eagles, Fitzwilly, Mister Buddwing, All Quiet on the Western Front, Night Crossing, The Gift of Love: A Christmas Story (referred to in our correspondence), The Last Days of Patton, The Member of the Wedding (a 1982 television adaptation of Carson McCullers’ book) and Ironclads (also discussed in our correspondence).

American author Howard Fast (1914-2003) was a prolific writer, penning such works as Citizen Tom Paine, Freedom Road, Spartacus, and April Morning, about the Battle of Lexington. The 1961 novel was adapted for television in 1988 under the direction of Mann.

Gates, a well-respected amateur historian of the Civil War and Abraham Lincoln, devoted 50 years to researching those subjects, reviewing books for the Lincoln Herald and contributing to such works as the anthology Lincoln for the Ages. He was an avid letter writer and “friend and unofficial agent of many a noted author,” (“Autographica Curiosa: How Not to Impress Emily Post,” Autograph Magazine, Butts). His own books include Amberglow of Abraham Lincoln and Ann Rutledge, Amberglow of Abraham Lincoln and Joshua Speed, Song of the Leaves: Quest of Johnny Appleseed and The Weaver. All letters bear normal wear and are in excellent condition.

Watch “What do ya feel like doing tonight,” from “Marty” 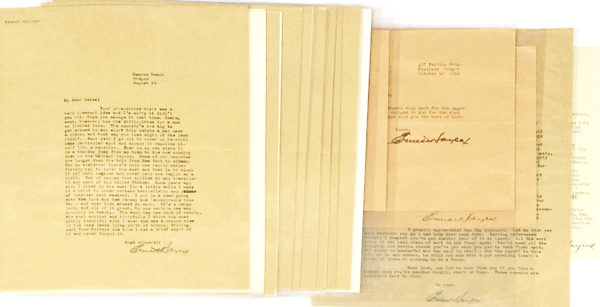