SCHOFIELD, JOHN M. (1831-1906). Union General in the Civil War, and secretary of war under presidents Grant and Johnson; commanding general of the Army. ALS. (“J.M. Schofield”). 2pp. 8vo. Washington, D.C., July 23, 1890. On Washington, D.C. stationery to a General. An unidentified hand notes, in pencil, that the recipient is FITZ-JOHN PORTER, (1822-1901), Union major general who was court-martialed for his actions at the Second Battle of Bull Run.

“I am much obliged for your letter of the 21st – That schorched [sic.] parchment will be a genuine historical curiosity, and I shall watch for its appearance in the Department. I doubt whether it ought to be sent to the original owner. Perhaps it should be filed for reference in history. They tell me the L.G. bill will pass without opposition, whenever they can get it up. But I don’t know when that may be…” 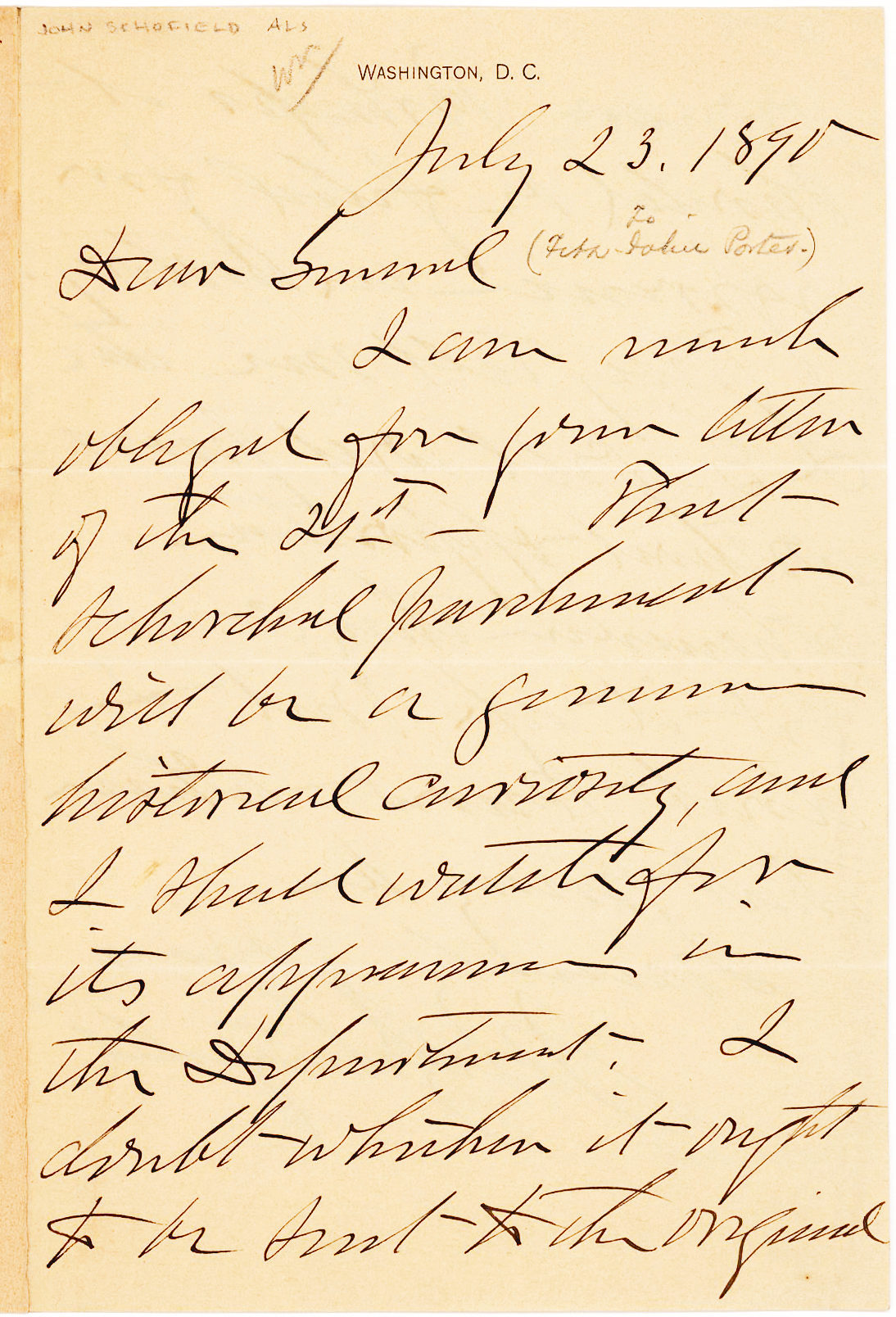 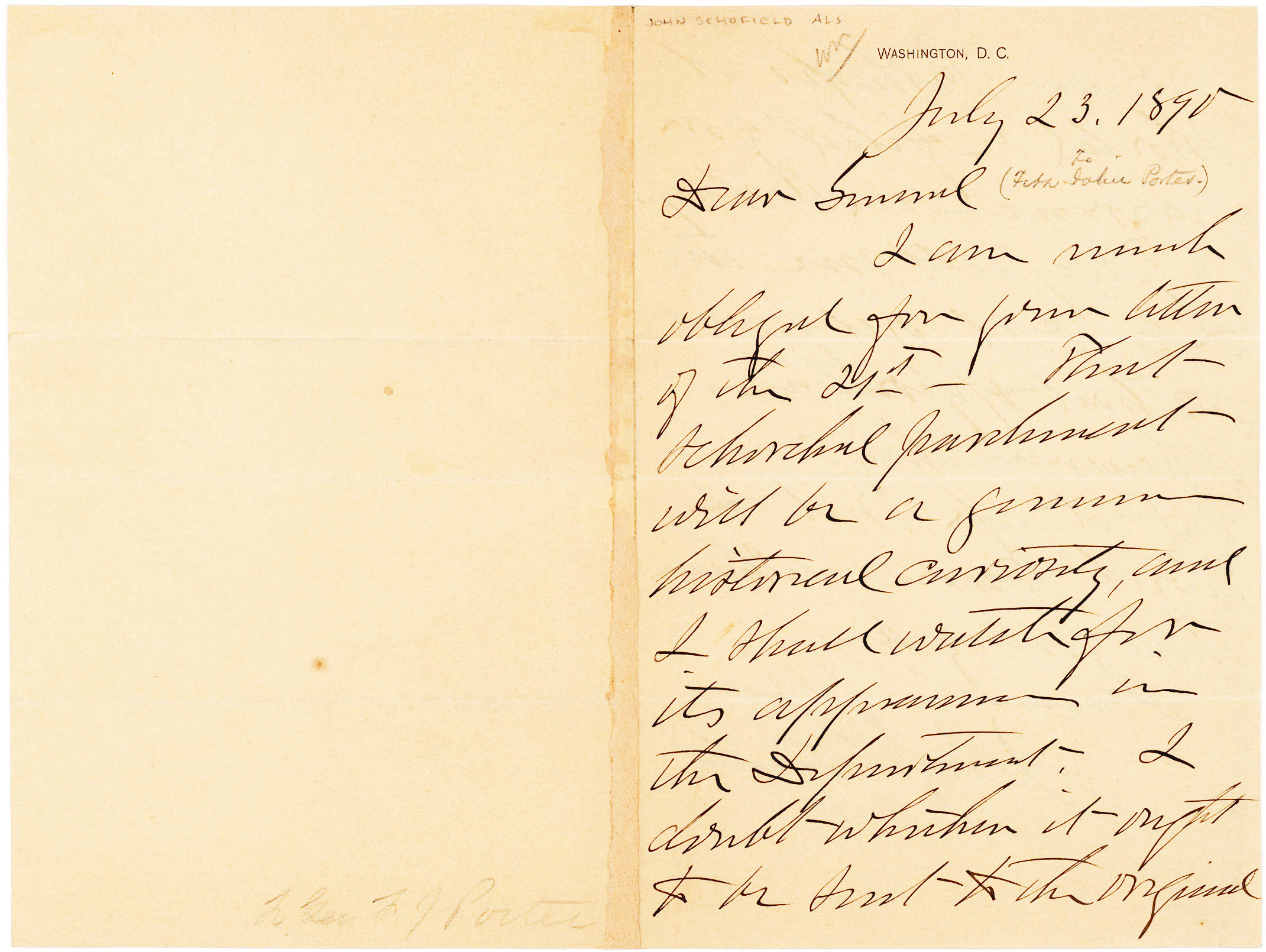 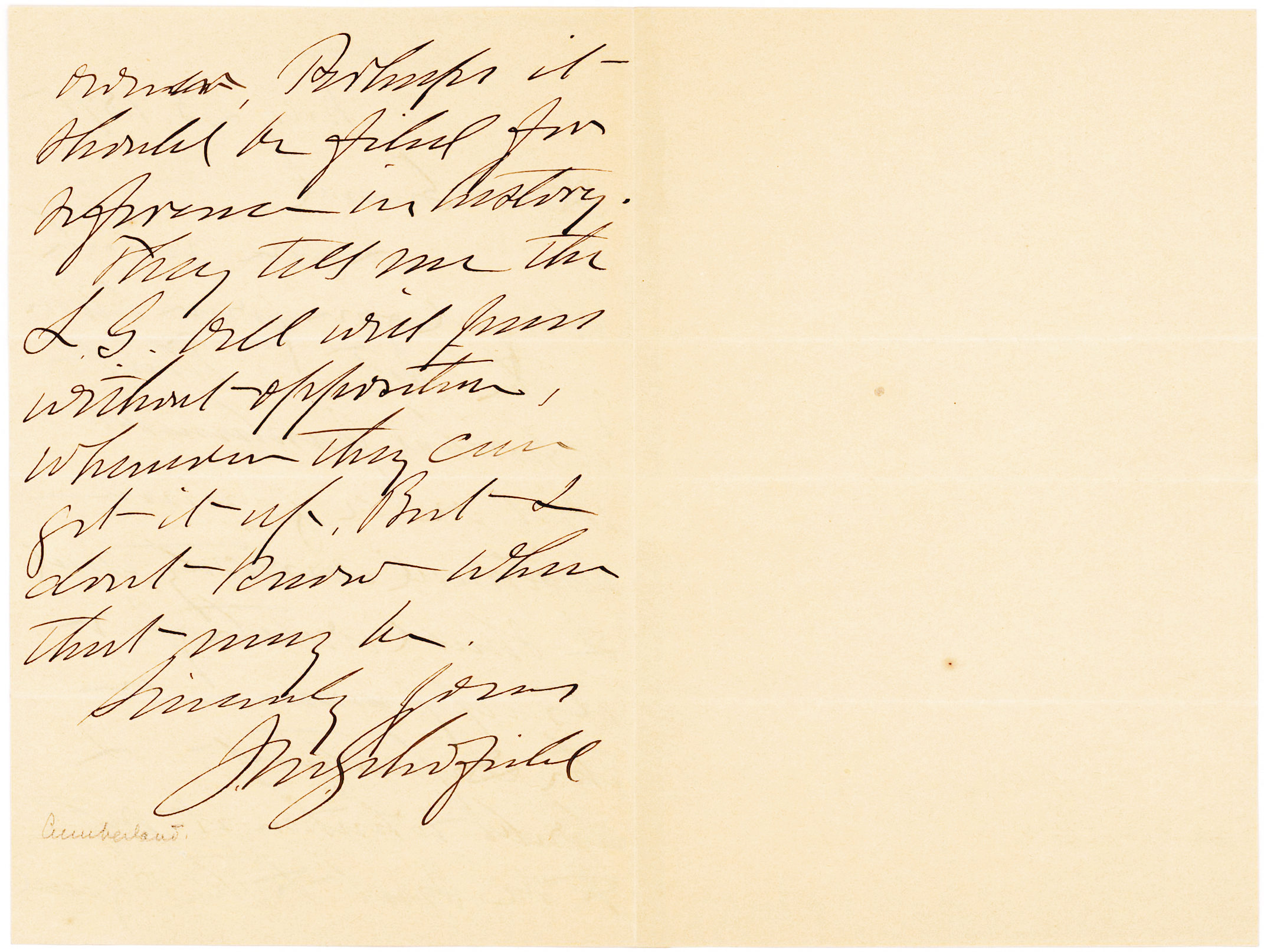 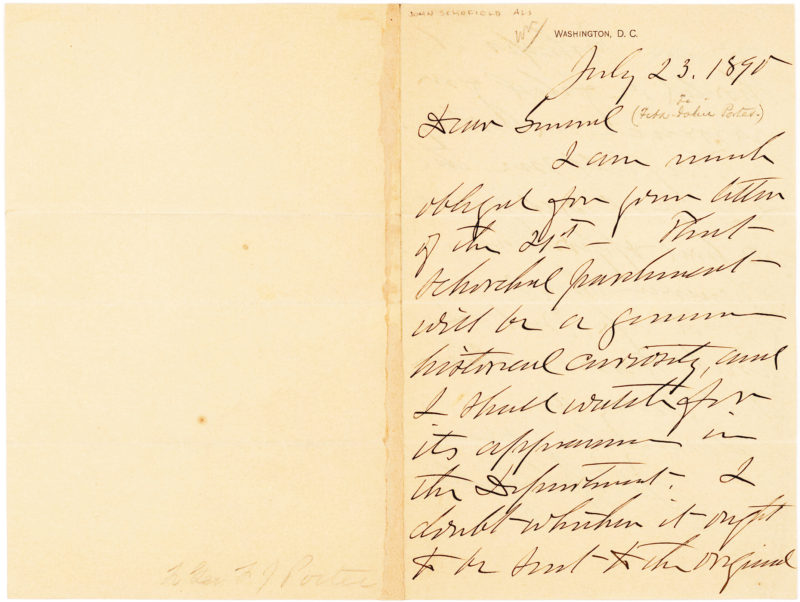 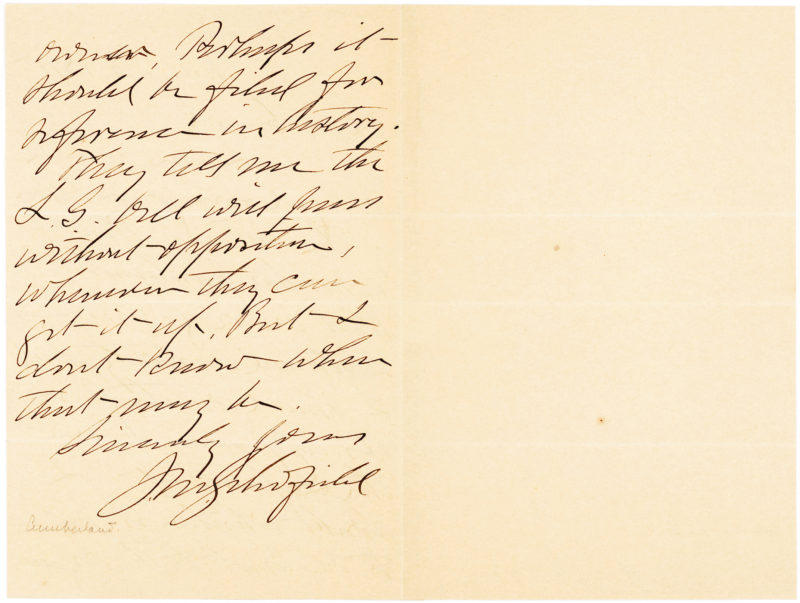 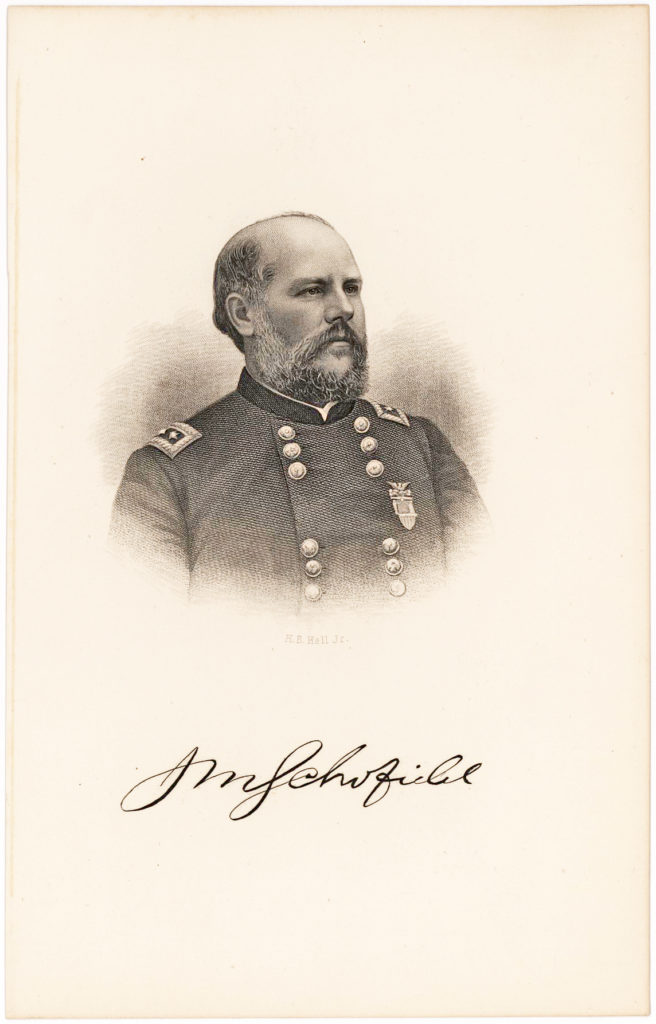 Educated at West Point, Schofield served two years in the artillery in South Carolina and Florida and taught at West Point before leaving the military to accept an academic post in St. Louis. At the outbreak of the Civil War, Schofield opposed Missouri joining the Confederacy and became an officer in the 1st Missouri Infantry Regiment. His meritorious actions at the 1861 Battle of Wilson’s Creek earned him the Medal of Honor and assured his eventual promotion to the rank of major general. He commanded the Army of the Ohio during Sherman’s Atlanta Campaign and helped defeat Confederate forces at the important Battle of Nashville in 1864. After the war, President Johnson appointed Schofield to the delicate position of military governor of Virginia, and, upon Stanton’s resignation, Johnson appointed Schofield secretary of war. He continued to hold various important military positions including superintendent of West Point. With the 1888 death of General Philip Sheridan, Schofield succeeded him as commanding general of the United States Army, a position he would hold until 1895.

In 1861, “General George B. McClellan ordered Porter to Washington to assist him in transforming raw recruits into the fighting force which would become the Army of the Potomac. At this time began the never-waning loyalty of Porter to McClellan,” (Generals in Blue: Lives of the Union Commanders, Warner). Porter’s participation in the Siege of Yorktown, the Battle of Gaines’ Mill and the Battle of Malvern Hill, earned him the rank of major general in 1862. However, during the Second Battle of Bull Run, Porter received orders from Major General John Pope to mount an attack that Porter deemed impossible. After holding back the advance, Pope charged him with insubordination. Porter was court-martialed, found guilty and dismissed from the army at the beginning of 1863 in a campaign manufactured by McClellan’s enemies. Porter never gave up his fight to clear his name, and a special commission headed by Schofield exonerated him in 1878. In 1886, Congress restored his commission and Porter retired from the U.S. Army vindicated. In the post-war years 1865-1871 Porter worked in mining and construction and held civic positions in New York City that included police commissioner and commissioner of public works.

Folded and in very fine condition; accompanied by an engraving of Scofield. 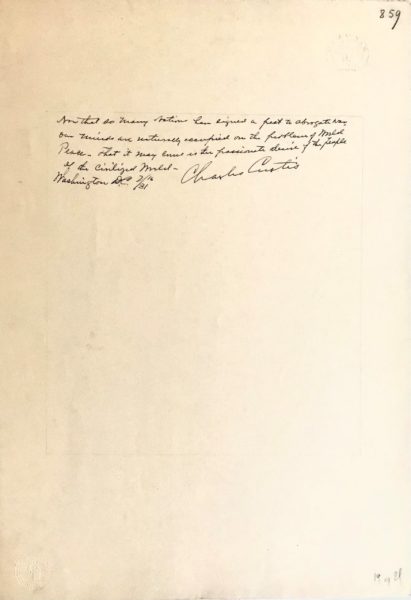 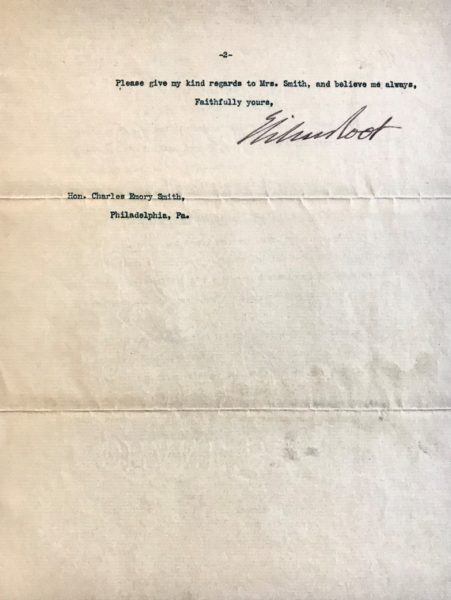 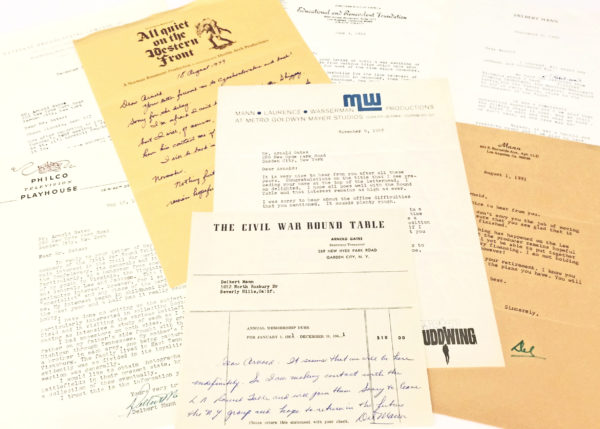