TLS as Defense Minister to the IDF’s Chief Rabbi: “…In religious matters, related to the IDF, you are the religious authority – the equivalent of the chief of staff’s authority”

BEN-GURION, DAVID. (1886-1973). Polish-born, Israeli statesman who became Israel’s first prime minister after proclaiming its independence in 1948. TLS. (“D. Ben-Gurion”). 1p. 4to. Hakirya, March 8, 1955. Written as minister of defense on his official stationery headed with the seal of the State of Israel. To SHLOMO GOREN (1917-1994), chief military rabbi of the IDF. In Hebrew with translation. 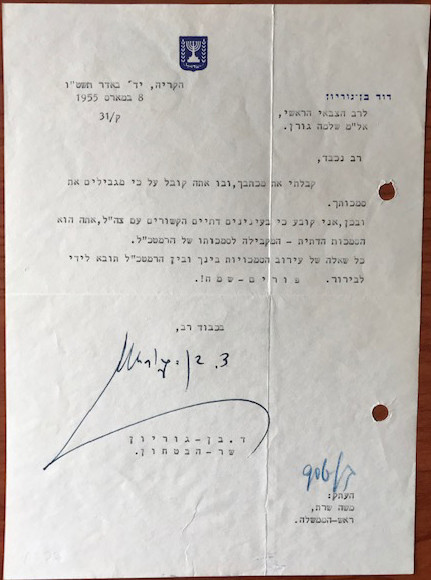 I have received your letter in which you complain that your authority is being restricted.

Well, I state that in religious matters, related to the IDF, you are the religious authority – the equivalent of the chief of staff’s authority.

Any question of mixing the powers between you and the Chief of Staff will be brought to me for an inquiry.

An early Zionist, Ben-Gurion moved to Palestine in 1906 to take up farming. Following his expulsion by Turkey at the outbreak of World War I, he rallied British and American support to promote increased Jewish immigration to Palestine, and after spending decades strengthening Palestine’s Jewish community, Ben-Gurion proclaimed the birth of Israel on May 14, 1948. He assisted in creating the Israeli army, often using military force to thwart Arab violence. After announcing his intention to leave public life, Ben-Gurion moved to the newly founded Negev Kibbutz Sde-Boker in early 1954. He never completely abdicated his leadership role, however, and in 1955 Ben-Gurion returned to public life, first as minister of defense, in which capacity he penned our letter. Following his tenure as defense minister, he was reelected prime minister in November 1955. 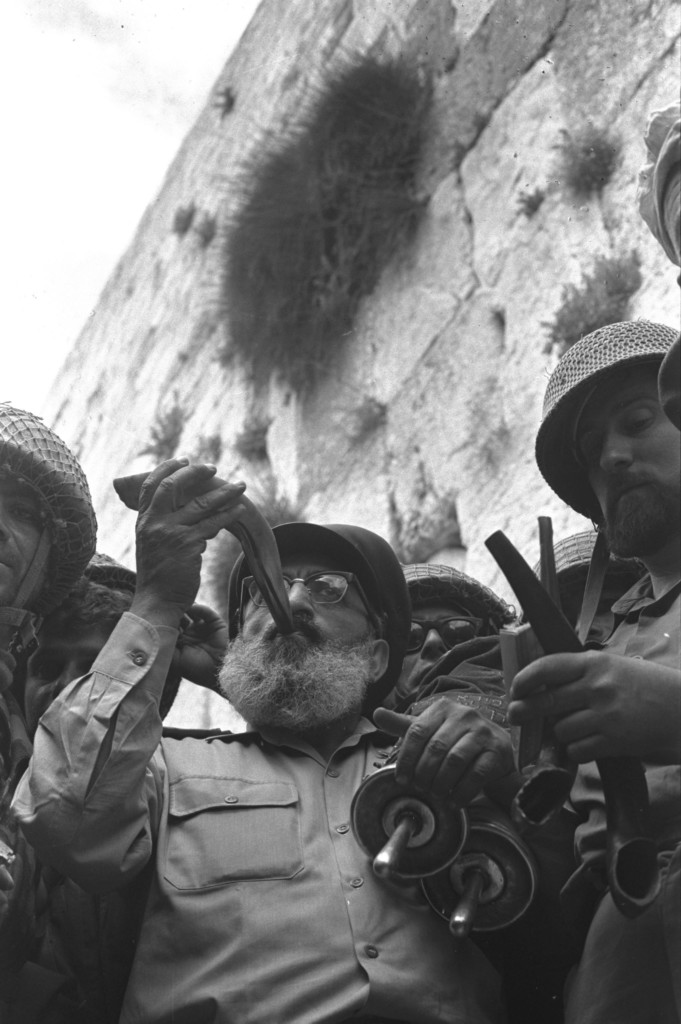 The year 1955 was a particularly volatile one in the Middle East. It had begun violently with Israel’s bombing of a nearby Egyptian military base as retaliation against Palestinian and Egyptian aggression, leading to renewed attacks against Jewish settlements. “Attempts at amelioration of the Arab-Israeli conflict were often made, and sometimes bore fruit. In April 1955 an agreement came into force in Jerusalem, whereby the District Commanders on both sides of the barbed wire and concrete divide could make contact with each other through a direct telephone line. The agreement, reached between the governments of Jordan and Israel, authorized the respective commanders to ‘discuss and settle questions regarding the maintenance of peace in Jerusalem’. The commanders also met face to face,” (Israel, Gilbert). Nonetheless, the violence continued, prompting the United Nations to intervene in September 1955.

Our letter relates to the Israeli Defense Forces (IDF), the military institution which Ben Gurion officially organized in 1948 by consolidating the paramilitary groups Haganah, Irgun and Lehi.

The Polish-born Goren came to the British Mandate of Palestine as a child and during his religious studies was recognized as a prodigy, becoming an ordained rabbi at 17. His scholarship combined religious devotion with a devoted commitment to Zionism. Goren volunteered for the Haganah and, later, became a paratrooper and chaplain in the IDF, eventually attaining the rank of major general and chief rabbi of the IDF’s Military Rabbinate. In that capacity he opposed separate units for religious and secular soldiers and authored a prayer book to accommodate the different ethnic groups within the IDF. He is remembered for his sometime controversial commitment to religious Zionism and for blowing a shofar upon Israel’s capture of the Western Wall during the Six-Day War in 1967.

Folded and lightly creased with two file holes in the right margin.

TLS as Defense Minister to the IDF’s Chief Rabbi: “…In religious matters, related to the IDF, you are the religious authority – the equivalent of the chief of staff’s authority”