“Thank you for your letter regarding the Social Security Domestic Employment Reform Act of 1994. This Act, as you point out, brought about a much needed reform to a provision of the tax code, which a great many people were inadvertently violating.  This was a reform long overdue and I very much appreciate your pivotal role in accomplishing it.

I think that the most serious issue your letter raises is the declining confidence of many of our citizens in the Social Security system. I hope that we will be able to reverse this decline in confidence now that the Social Security Administration is an independent agency – a goal you have long worked toward. I expect to work along with Shirley Chater, following Senate confirmation of her nomination, to increase the public’s knowledge of the system.

The goals of the newly- independent SSA will be to: 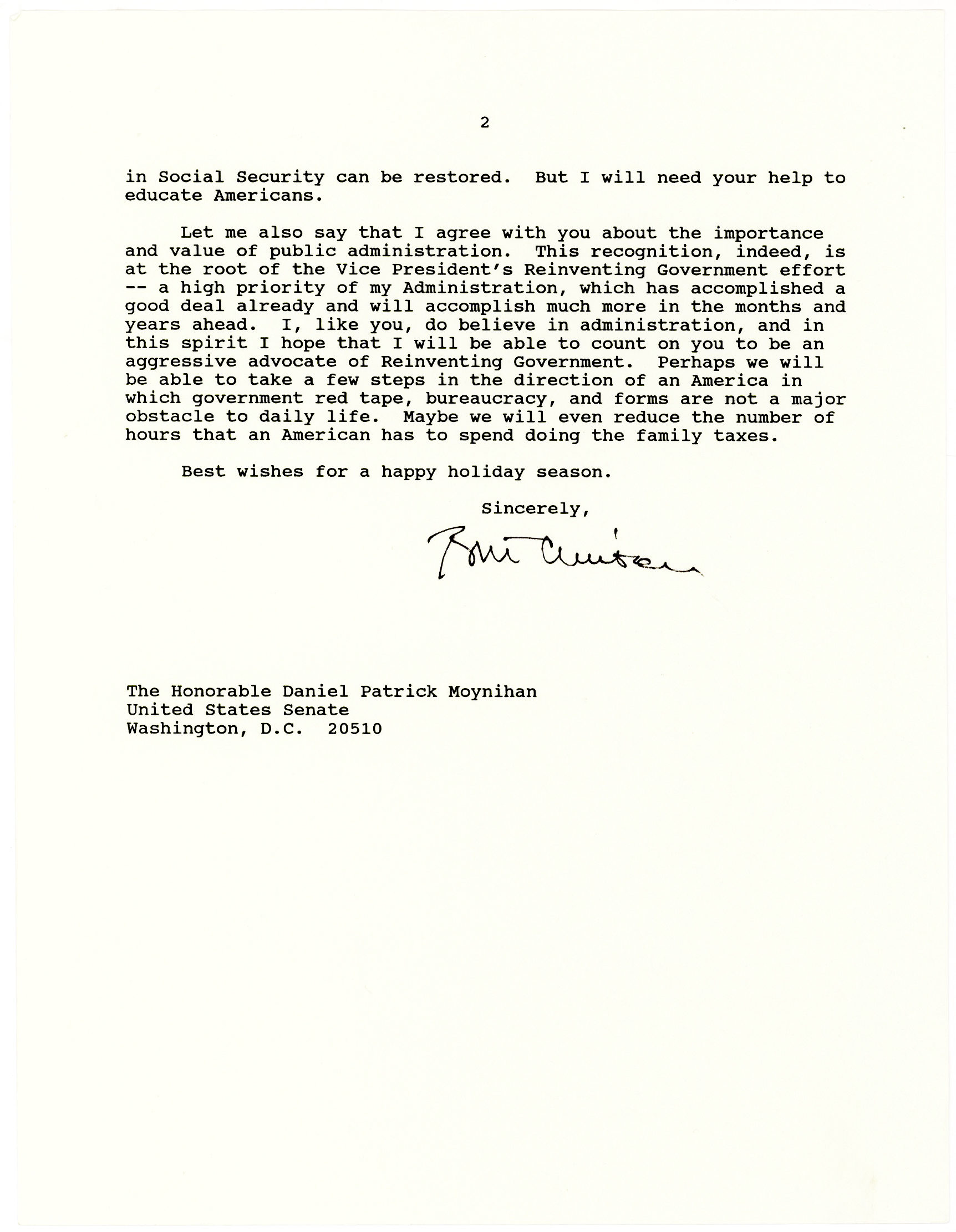 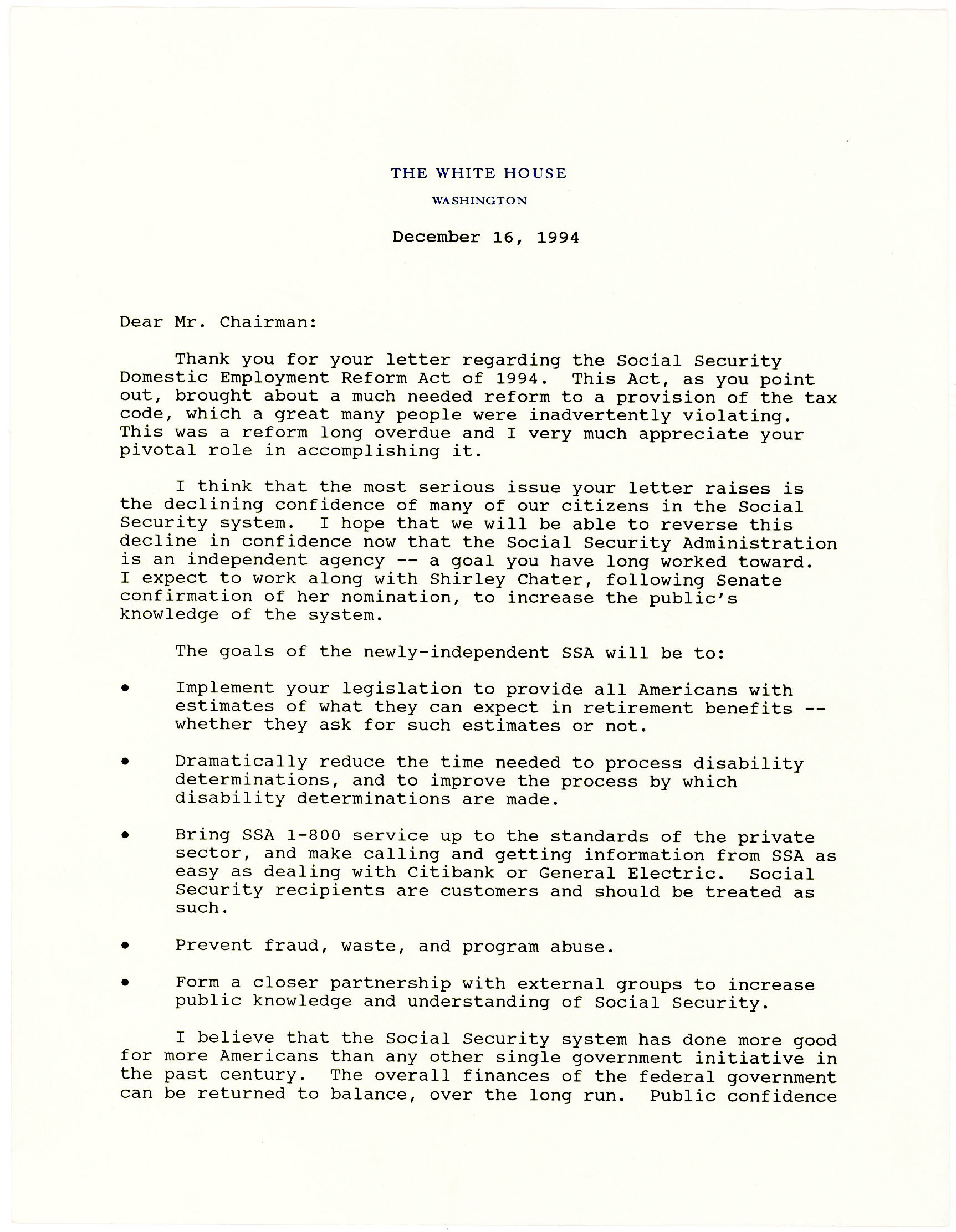 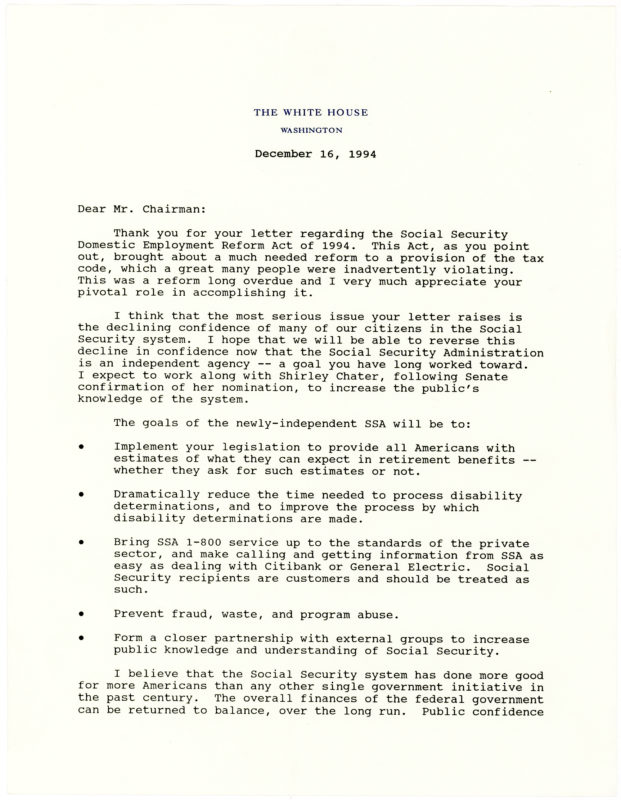 Implement your legislation to provide all Americans with estimates of what they can expect in retirement benefits –whether they ask for such estimates or not.

Bring SSA 1-800 service up to the standards of the private sector, and make calling and getting information from SSA as easy as dealing with Citibank or General Electric. Social Security recipients are customers and should be treated as such.

Form a closer partnership with external groups to increase public knowledge and understanding of Social Security.

I believe that the Social Security system has done more good for more Americans than any other single government initiative in the past century. The overall finances of the federal government can be returned to balance, over the long run. Public confidence in Social Security can be restored. But I will need your help to educate Americans.

Let me also say that I agree with you about the importance and value of public administration. This recognition, indeed, is at the root of the Vice President’s Reinventing Government effort – a high priority of my Administration, which has accomplished a good deal already and will accomplish much more in the months and years ahead. I, like you, do believe in administration, and in this spirit I hope that I will be able to count on you to be an aggressive advocate of Reinventing Government. Perhaps we will be able to take a few steps in the direction of an America in which government red tape, bureaucracy, and forms are not a major obstacle to daily life. Maybe we will even reduce the number of hours that an American has to spend doing the family taxes.

Clinton, a former Arkansas governor, became the youngest president since Kennedy upon his election in 1993. His re-election made him the first Democrat since FDR to serve a full second term, and he left office with the highest approval rating of any president in the second half of the 20th century. Unfortunately, a series of sex scandals overshadowed his accomplishments. His 1998 impeachment by the House was only the second time in American history that a president had been impeached (the first being Andrew Johnson in 1868).  Both presidents were acquitted in the Senate. 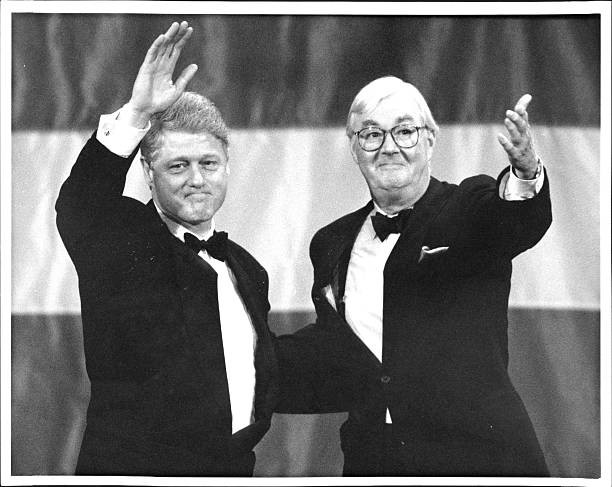 Clinton signed the Family and Medical Leave Act into law with Moynihan’s approval and they also tackled the thorny issue of welfare reform, a matter of special interest to Moynihan on which he and Clinton came to disagree. Our letter regards the Social Security Domestic Employment Reform Act of 1994, which Moynihan sponsored and the stated purpose of which was “to provide for simplified collection of employment taxes on domestic services, and for other purposes.”

Shirley Chater (b.1932) was a trained nurse and experienced administrator who Clinton nominated as Social Security Commissioner in October 1993. In 1994, as part of Clinton’s reforms, the Social Security Administration was separated from the Department of Health and Human Services. With the change, Chater’s term was to be extended to six years but the Senate Finance Committee, of which Moynihan was chair, chose not to reconfirm her and she resigned in 1997.

Prior to his Congressional career, Moynihan served President Nixon as his counselor on urban affairs. A former assistant secretary of labor under Kennedy and Johnson and director of the Harvard–MIT Joint Center for Urban Studies, Moynihan was chosen, in part, because of his academic background in social policy. His subsequent diplomatic career included ambassadorships to India and the United Nations. In 1977, he was elected to the Senate, representing New York from 1977 to 2001. A hallmark of his long and impressive senatorial career was his ongoing interest in American poverty and the problem of welfare dependency. Moynihan, a trained sociologist, penned several substantial works on the subject including The Negro Family: The Case for National Action (also known as the Moynihan Report), Maximum Feasible Misunderstanding: Community Action in the War on Poverty, The Politics of a Guaranteed Income: The Nixon Administration and the Family Assistance Plan, and Future of the Family. Despite their differences, Clinton bestowed the Presidential Medal of Freedom on the senator in 2000. Although Moynihan and the Clinton White House did not always see eye-to-eye, upon leaving his seat in the Senate in 2001, Moynihan endorsed former First Lady Hillary Clinton who was elected to fill it.

Vice President Al Gore (b.1948), served alongside Clinton for both of his two terms during which he headed the National Partnership for Reinventing Government (NPR), established in 1993 to make the federal government more efficient. Gore’s own presidential bid in 2000 ended with a popular victory but loss in the Electoral College. For his efforts to identify and address climate change he was a joint recipient of the Nobel Peace Prize.