“Many times the past six months since leaving America I wished that I might visit your home again and tell you of my new location and work. My brother was in Syria a fortnight ahead of me, and I only reached here just the day before Christmas which we all spent together. The Mission annual meeting in the early part of January located me at J[o]unieh to open the hitherto unoccupied district of Keserwan, comprising 235 towns and villages. I went down to Sidon packed up my hospital furniture, beds, instrument cases, tents, tent equipment and chairs, tables, etc. These were shipped to J[o]unieh in a vessel, which after a voyage of eight days was wrecked in a severe gale. This was at first a staggering blow. I could not believe nor realize the loss. The hospital tent alone cost 27 English pounds, and my magic lantern was to be my mainstay in teaching Bible stories and impressing Gospel truths on the hearts of the people in their new location. However, I went at once to work and with the help of the native carpenters we have now both our home and dispensary in running order. The house we occupy is a temporary one, but the larger hospital building is rapidly approaching completion. It would be such a pleasure if you and Mr. Campbell could see what a beautiful situation the hospital has, and how well fitted it will be to attract the patients, as it is situated on the highway to Tripoli and at the junction of three carriage roads. 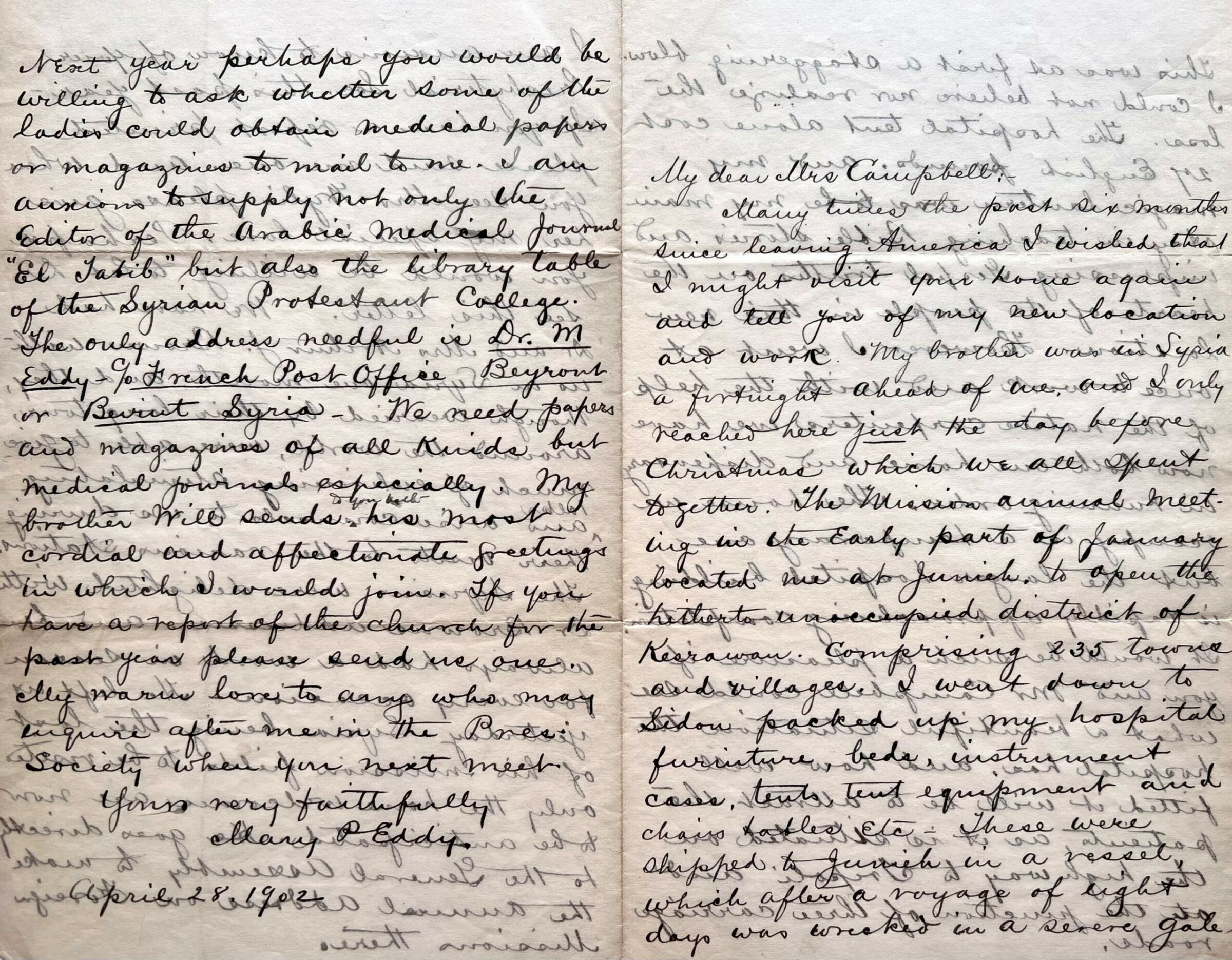 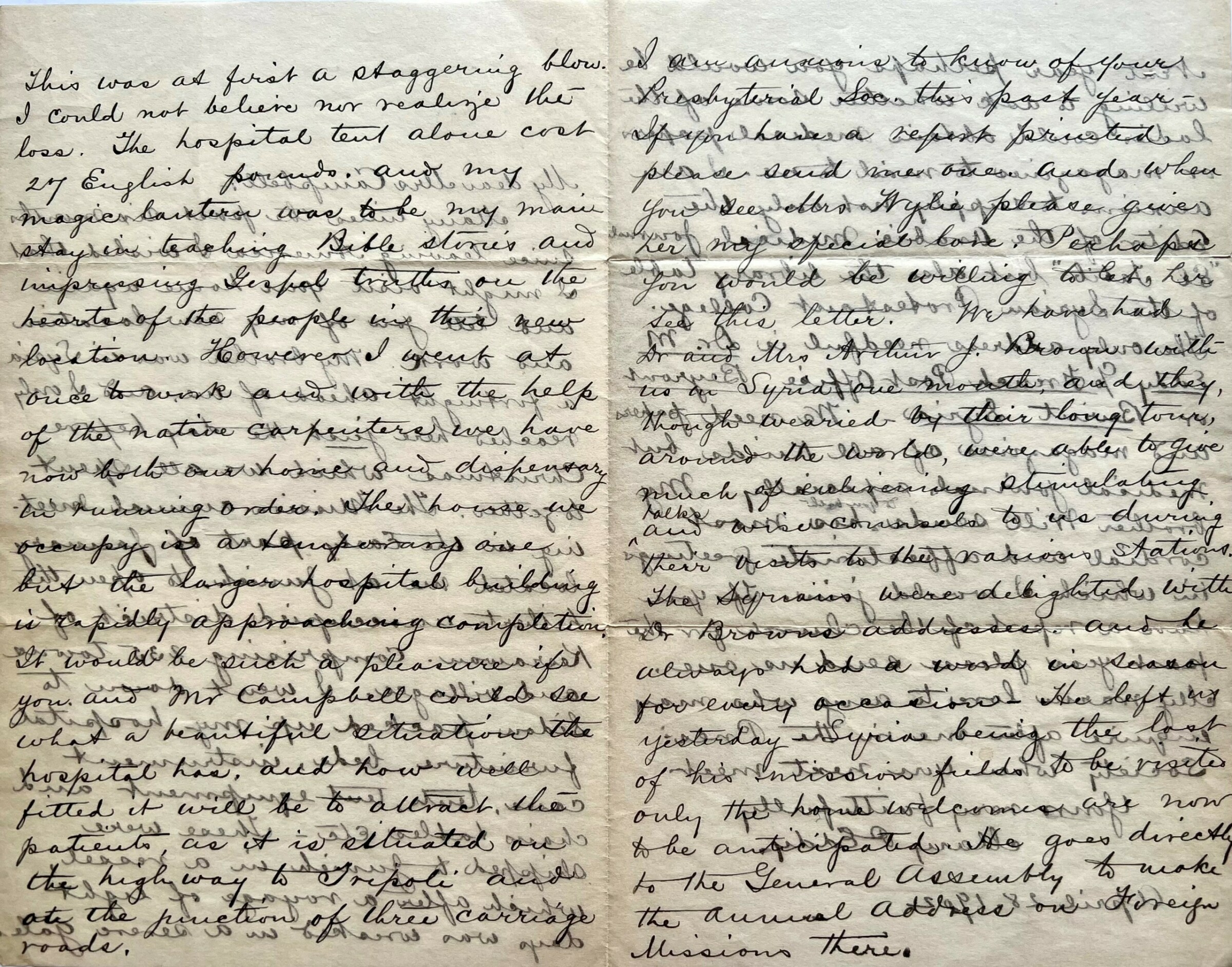 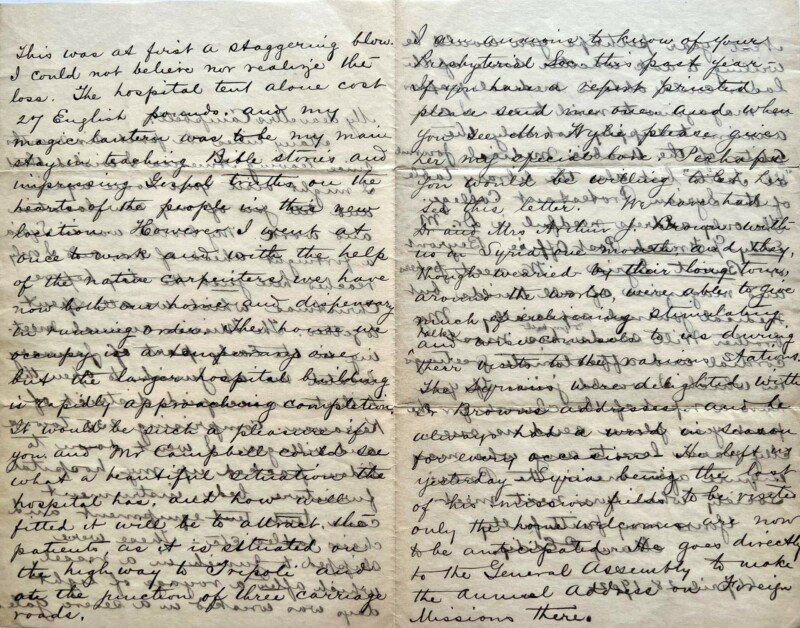 I am curious to know of your Presbyterial Soc. this past year. If you have a report printed, please send me one, and when you see Mrs. Wylie, please give her my special love. Perhaps you would be willing to let her see this letter. We have had Dr. and Mrs. Arthur J. Brown with us in Syria one month, and they, though wearied by their long tour, around the world, were able to give much of enlivening, stimulating talks and wise counsels to us during their visits to the various stations. The Syrians were delighted with Dr. Brown’s addresses, and he always had a word in season for every occasion – He left us yesterday – Syria being the last of his mission fields to be visited only the home welcomes are now to be anticipated. He goes directly to the General Assembly to make the annual address on Foreign Missions there.

Next year perhaps you would be willing to ask whether some of the ladies could obtain medical papers or magazines to mail to me. I am anxious to supply not only the Editor of the Arabic Medical Journal ‘El Jahib’ but also the library table of the Syrian Protestant College. The only address needful is Dr. M. Eddy – c/o French Post Office, Beyrout or Beirut Syria – We need papers and magazines of all kinds but medical journals especially. My brother Will sends to you both his most cordial and affectionate greetings in which I would join. If you have a report of the church for the past year please send us one. My warm love to any who may enquire after me in the Pres. Society when you next meet…” 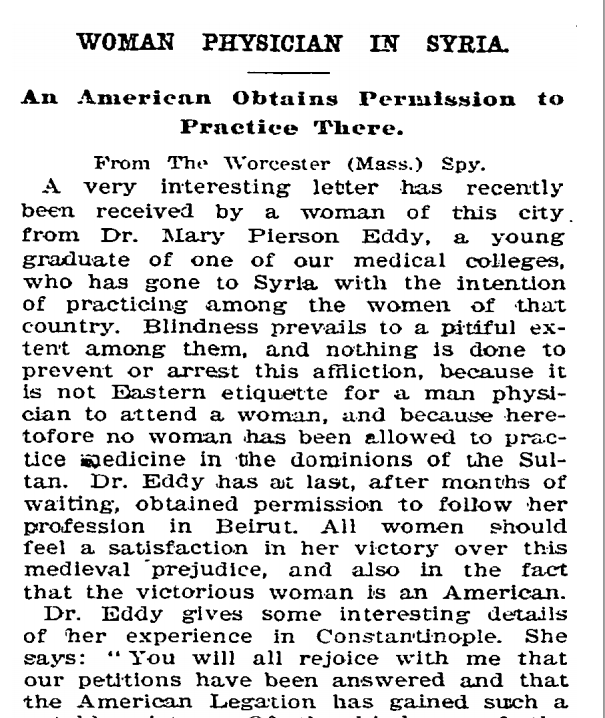 Eddy was born and raised in Syria, then part of the Ottoman Empire, to missionary parents from New York state. Only returning to the United States for her education, she earned a medical degree from Woman’s Medical College of Pennsylvania in Philadelphia in 1892, after which the Presbyterian Board of Foreign Missions sent her back to Syria, where she provided itinerant medical care in Lebanon’s Keserwan district, traversing the countryside on horseback, performing surgeries in tents and staying in crowded mud huts. The following year, she traveled to Istanbul to obtain a medical license from Ottoman officials, impressing them by speaking flawless Arabic and stating, “I am of you and from among you,” before undergoing six hours of questioning of her medical knowledge. An 1894 report in The New York Times discussed Eddy’s motivation: “Blindness prevails to a pitiful extent among [Syrian women], and nothing is done to prevent or arrest this affliction, because it is not Eastern etiquette for a man physician to attend a woman, and because heretofore no woman has been allowed to practice medicine in the dominions of the Sultan,” (“Woman Physician in Syria,” New York Times, 1894). Returning to Syria, she established hospitals and clinics including “a dispensary for women in the area of Junieh [sic], 15 miles north of Beirut, where the Maronite Christians had prevented any Protestants from living. By her service, Eddy soon made friends and opposition faded,” (Biographical Dictionary of Christian Missions, ed. Anderson). In 1903, Eddy founded a tuberculosis sanatorium that in the summer brought patients from Jounieh to the cool mountains near Hamana, and then back to the seaside during winter.

Our letter discusses missionary business, asks for medical journals to be sent to her, and mentions prominent American Presbyterian missionary Arthur Judson Brown (1856-1963) and his 1901-1902 world trip to Asian missions. A proponent of ecumenicalism, Brown wrote a seventeen-volume diary recording his time in Asia. 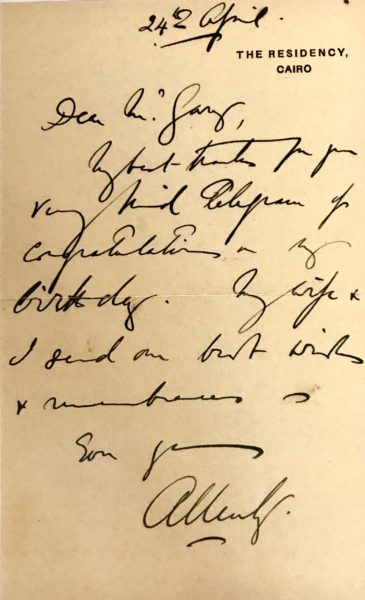 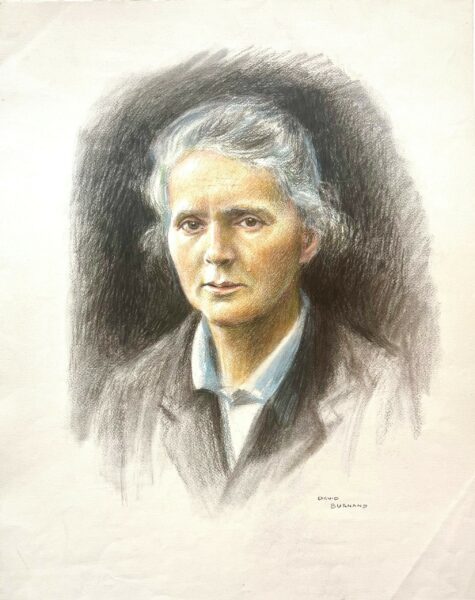 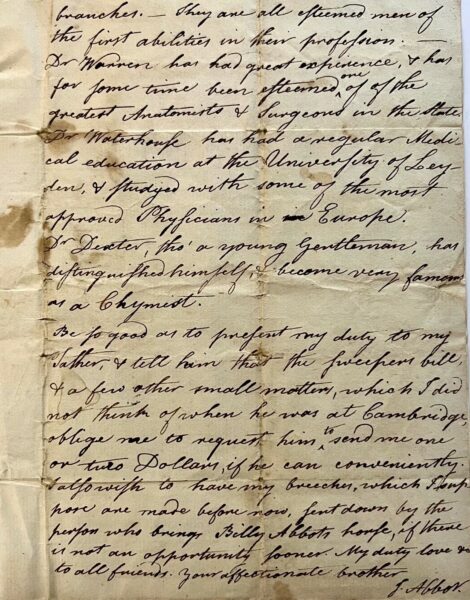