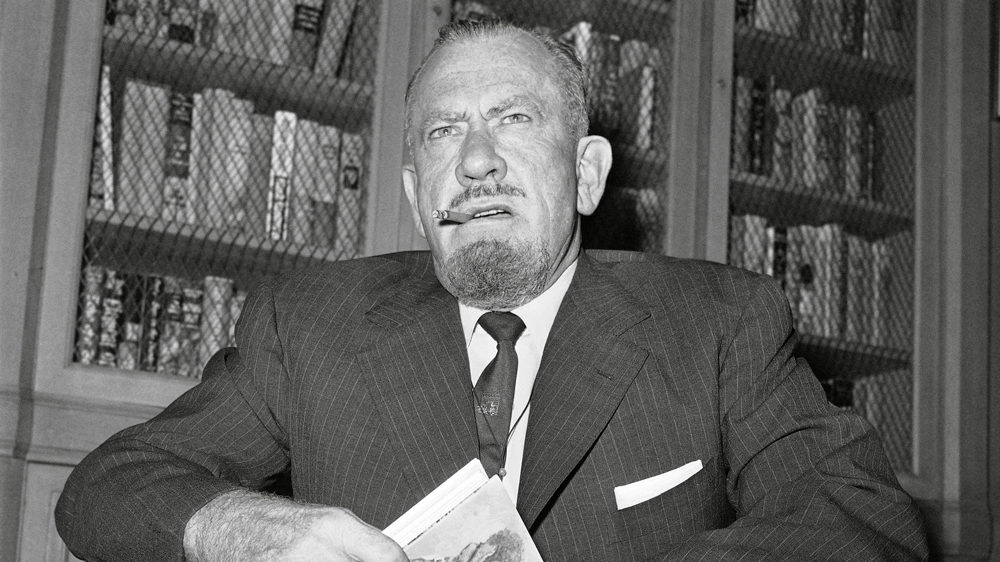 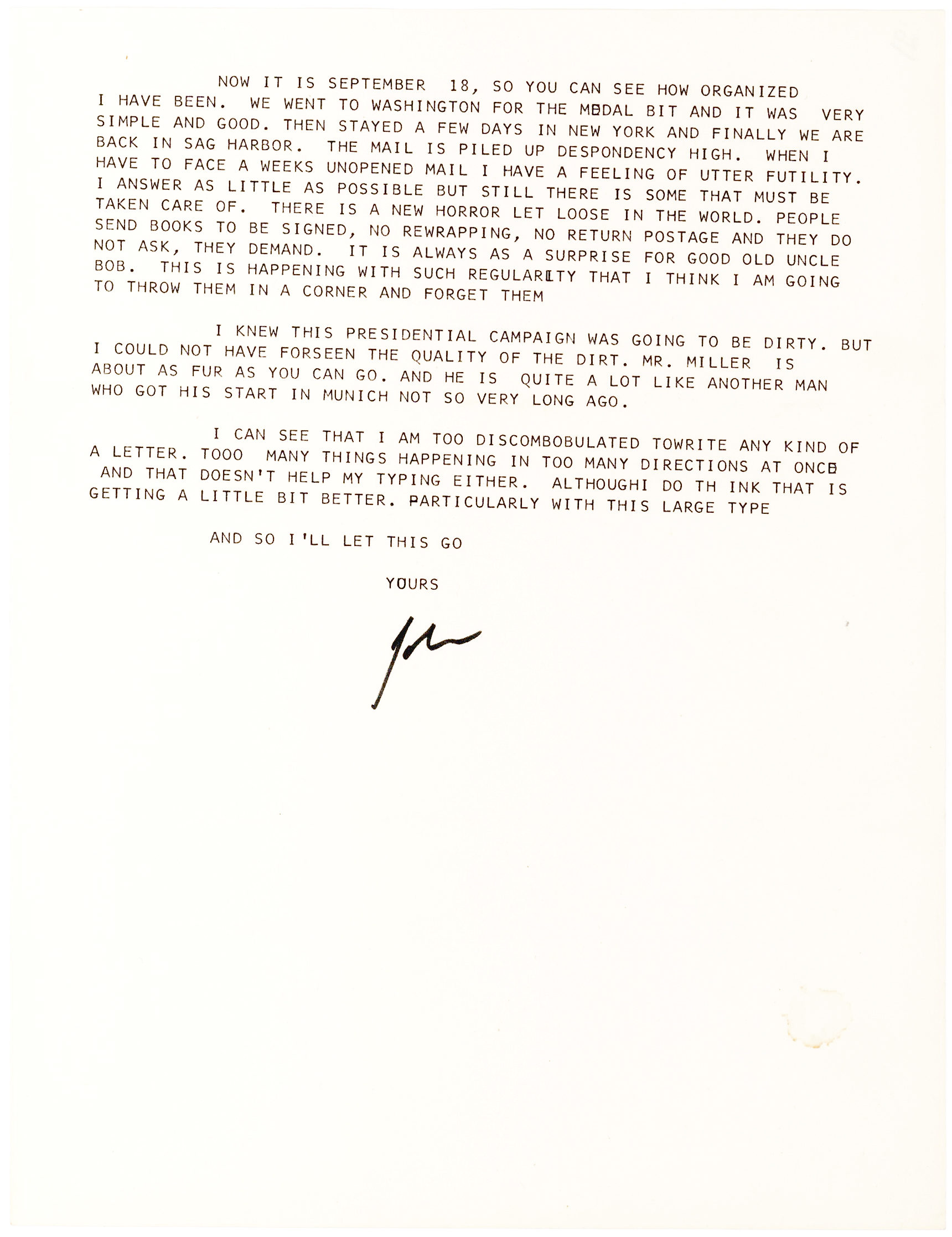 “Now it is September 18, so you can see how organized I have been. We went to Washington for the medal bit and it was very simple and good. Then stayed a few days in New York and finally we are back in Sag Harbor. The mail is piled up despondency [sic] high. When I have to face a weeks [sic] unopened mail I have a feeling of utter futility. I answer as little as possible but still there is some that must be taken care of. There is a new horror let loose in the world. People send books to be signed, no rewrapping, no return postage and they do not ask, they demand. It is always as a surprise for good old Uncle Bob. This is happening with such regularity that I think I am going to throw them in a corner and forget them. I knew this presidential campaign was going to be dirty. But I could not have foreseen the quality of the dirt. Mr. Miller is about as fur [far] as you can go. And he is quite a lot like another man who got his start in Munich not so very long ago. I can see that I am too discombobulated to write any kind of a letter. Too many things happening in too many directions at once and that doesn’t help my typing either. Although I do think that is getting a little bit better. Particularly with this large type. And so I’ll let this go…”

Steinbeck’s wife, Elaine, had attended the University of Texas where one of her classmates was future First Lady “Lady Bird” Johnson. In late 1963, the two women met again and their husbands met for the first time when “the Steinbecks attended a private dinner at the White House. At that time, the couple had just returned from a trip to Eastern Europe and the then Soviet Union, as part of the U.S. Information Agency’s (USIA) cultural exchange program. The Steinbecks were in Washington, D.C., for three days of debriefing by the State Department. The dinner at the White House was their opportunity to report directly to the president on their travels behind the Iron Curtain. Following the dinner, the two couples developed a warm relationship. In the summer of 1964, Steinbeck helped Johnson write his acceptance speech for the democratic nomination,” (“Letter from President Lyndon B. Johnson to John Steinbeck,” Teaching with Documents, National Archives, Potter). The following fall, on September 14, President Johnson awarded Steinbeck the Presidential Medal of Freedom (referred to in our letter), the nation’s highest civilian award for which he had been selected by President John F. Kennedy prior to the latter’s assassination. 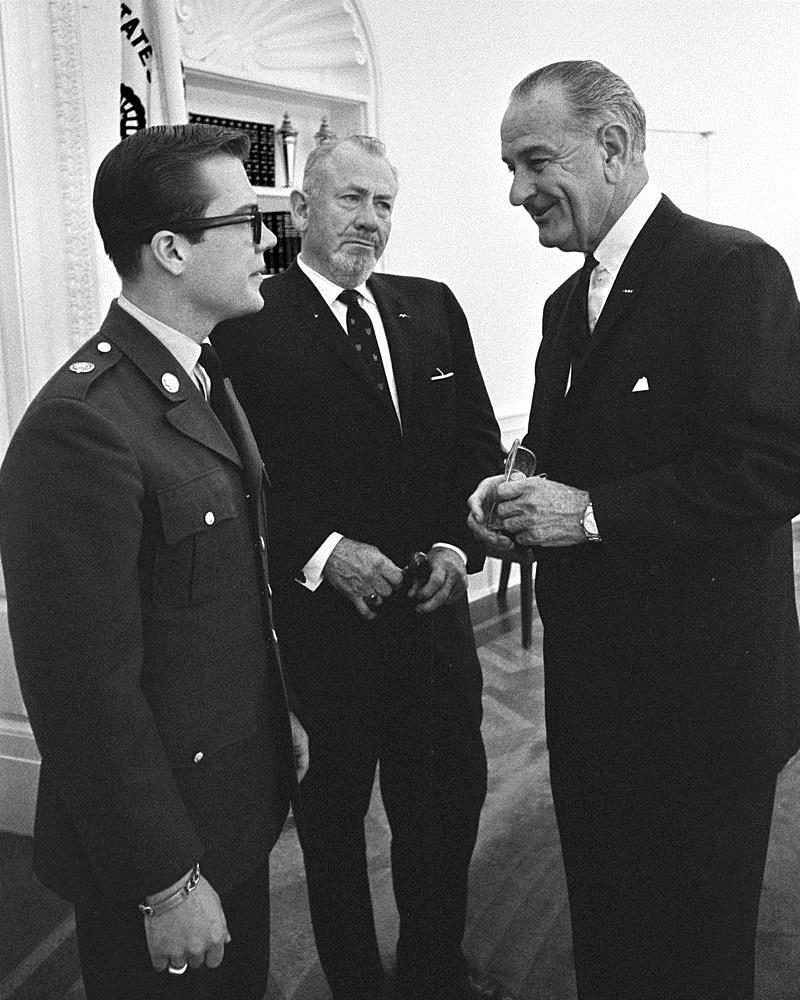 John Steinbeck’s son at 19 (left) with father, novelist John, (center) visiting President Lyndon B. Johnson in the Oval Office, May 16, 1966

The Steinbecks were frequent overnight guests at the Johnson White House and in the spring of 1966 Steinbeck even requested the president’s assistance in assuring his son be stationed in Vietnam (at his son’s request). The president complied and met with Steinbeck and his son, John Steinbeck IV.

In our letter Steinbeck discusses the upcoming presidential election in which the incumbent Johnson with vice presidential candidate Hubert Humphrey ran against Barry Goldwater and his vice presidential candidate William Miller (1914-1983), a Congressman who was best known for his digs at President Kennedy. His obscurity gave birth to the doggerel “Here’s a riddle, it’s a killer / Who the hell is William Miller?” (Before the Storm: Barry Goldwater and the Unmaking of the American Consensus, Perlstein).

Gossage was a groundbreaking advertising executive who co-founded the Freeman, Mander and Gossage agency that counted among its clients Petrofina Oil Co., the Sierra Club, Qantas Airways, and Rover. The agency’s home, a firehouse, was a hub of intellectualism frequented by futurist Buckminster Fuller and authors Tom Wolfe and John Steinbeck. For several years, Gossage had been corresponding with Steinbeck, soliciting feedback about his Land Rover advertising campaign. Typed in all caps on a sheet of plain white paper. Folded into thirds and in very fine condition.