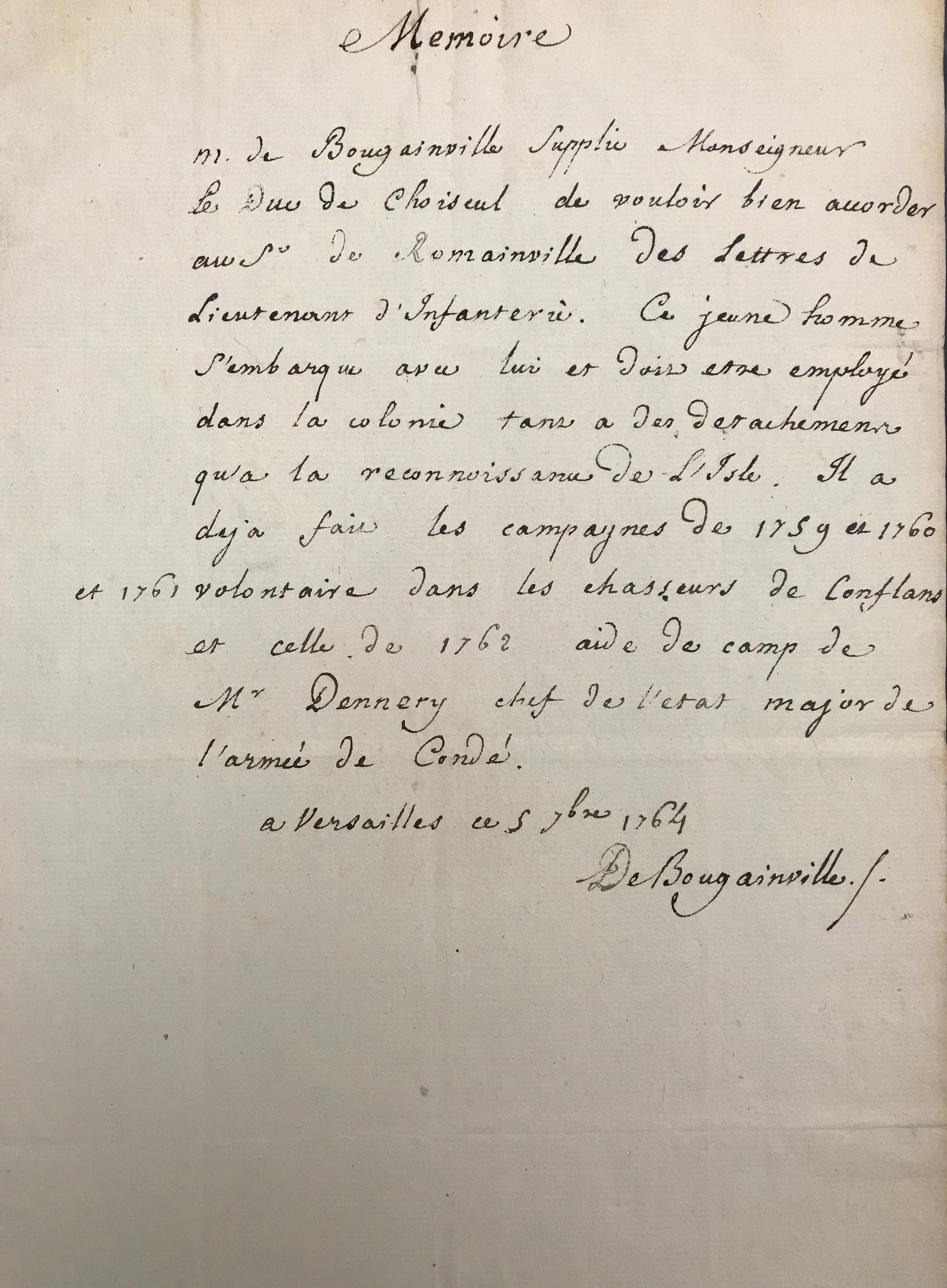 Mr de Bougainville begs Monseigneur the Duke de Choiseul to be good enough to grant Sir de Romainville an appointment of infantry lieutenant. This young man embarks with him and must be employed in the colony both for detachments and for the reconnaissance of the island. He’s already participated to the campaigns of 1759 and 1760 and 1761 as volunteer in the chasseurs of Conflans and that of 1762 as aide-de-camp of Mr. Dennery chief of the Condé army general staff…” 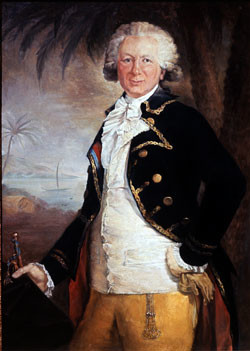 A French army officer who worked in London’s French embassy, Bougainville served as General Montcalm’s aide in Canada during the French and Indian War – the American theater of the Seven Years War that pitted Britain, Prussia, Portugal, against France, Spain, Russia, and the Holy Roman Empire. Unable to prevent the British from capturing Quebec and Montreal, Bougainville lost his military commission upon the French surrender. For the remainder of the war, from 1761-1763, he was instrumental in negotiating the Treaty of Paris, by France and Spain ceded vast amounts of overseas holdings to Great Britain, including much of their North American territories.

Beginning in 1755, and with renewed vigor in 1758, the British expelled or deported Acadians, French settlers of New Brunswick, Nova Scotia, the Magdalen Islands, Prince Edward Island, and parts of modern Maine. Following the Treaty of Paris, many Acadians relocated to Louisiana, which had been transferred from France to Spain at the end of the war. However, Bougainville initiated and personally funded a plan to settle the displaced Acadians on the Isles Malouines or Falkland Islands.

Located off the coast of Chile, the Falkland Islands, first appeared on the maps of European explorers in the 16th century but remained uninhabited despite territorial claims of both Britain and Spain. With two ships, Bougainville departed from France in September 1763 and arrived in the Falkland Islands in January 1764, establishing a naval base at Port Louis. Upon their return to France, King Louis XV ratified French possession of the islands on September 12, 1764, seven days after our letter.

However, French claim to the island was contested and, in 1766, Bougainville’s colony was transferred to the Spanish, who agreed to compensation. Thereafter, Britain and Spain clashed over their claims to the Falkland Islands. Currently a British overseas territory, the islands are still the object of contention, having been fought over between Great Britain and Argentina in 1982.

After officially releasing the Falkland Islands to the Spanish, in December 1766, Bougainville embarked upon a round-the-world voyage, continuing to Buenos Aires, the Tuamotu Archipelago, and Tahiti, before venturing across the Pacific. By the following September, his ship La Boudeuse had reached Batavia (now Jakarta) and on February 16, 1769, after nearly two-and-a-half years on the high seas, she returned, with the loss of only seven crew members, to the northwestern French port of St.-Malo. Bougainville’s lively account of his travels appeared in 1771. A participant in the American Revolution, Bougainville was also a notable mathematician and the first to calculate longitude by means of astronomical observations. The flowering vine Bougainvillea is named in his honor.

A French noble and army officer, Choiseul earned the patronage of Madame de Pompadour after he obtained for her letters written by King Louis XV to another mistress. She helped establish Choiseul’s diplomatic career, during which he helped author the Second Treaty of Versailles. He was French minister of foreign affairs during the Seven Years War after which he dedicated himself to rebuilding the military and French power abroad. He served as foreign minister from 1766-1770.

Our letter asks for the promotion to lieutenant of Charles Routier de Romainville (1739-1808) and mentions his recent military service under Louis Joseph, Prince de Condé (1736-1818) in the 1762 Battle of Nauheim during which Condé’s French troops defeated Hanoverian and British troops. Romainville received his appointment to the rank of lieutenant in November 1764 and joined Bougainville on his expedition to the Falklands, remaining there to implement their plans for the new colony until he joined Bougainville on his round-the-world voyage and, in so doing, made his name as an engineer and cartographer. He later went on to help establish a French colony on the Seychelles. 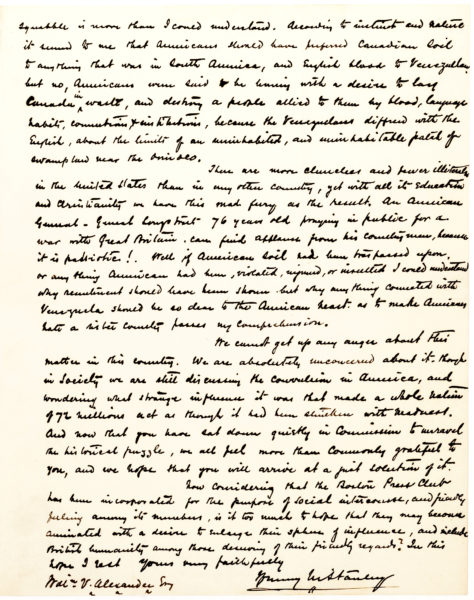