ORFILA, MATHIEU. (1787-1853). Spanish chemist who served as royal physician to Louis XVIII and pioneered the science of toxicology. ALS. (“Orfila”). 1p. 8vo. Paris, June 7, 1851. On the letterhead of the Ministry of Public Instruction and Ecclesiastical Affairs. To the president of the Court of Assizes of the Lower Loire. In French with translation.

“Having been assigned to come to Nantes on the 11th of this month, I would like to know if I will be testifying on that day or the following day. If you could provide me with that information, I will be infinitely grateful. Having been retained by the Superior Council for its session, I must try to keep my absence as short as possible. On the evening before the date you gave me I will leave for Antwerp so that I can get to Nantes sometime in the morning of the day when I will be deposed…” 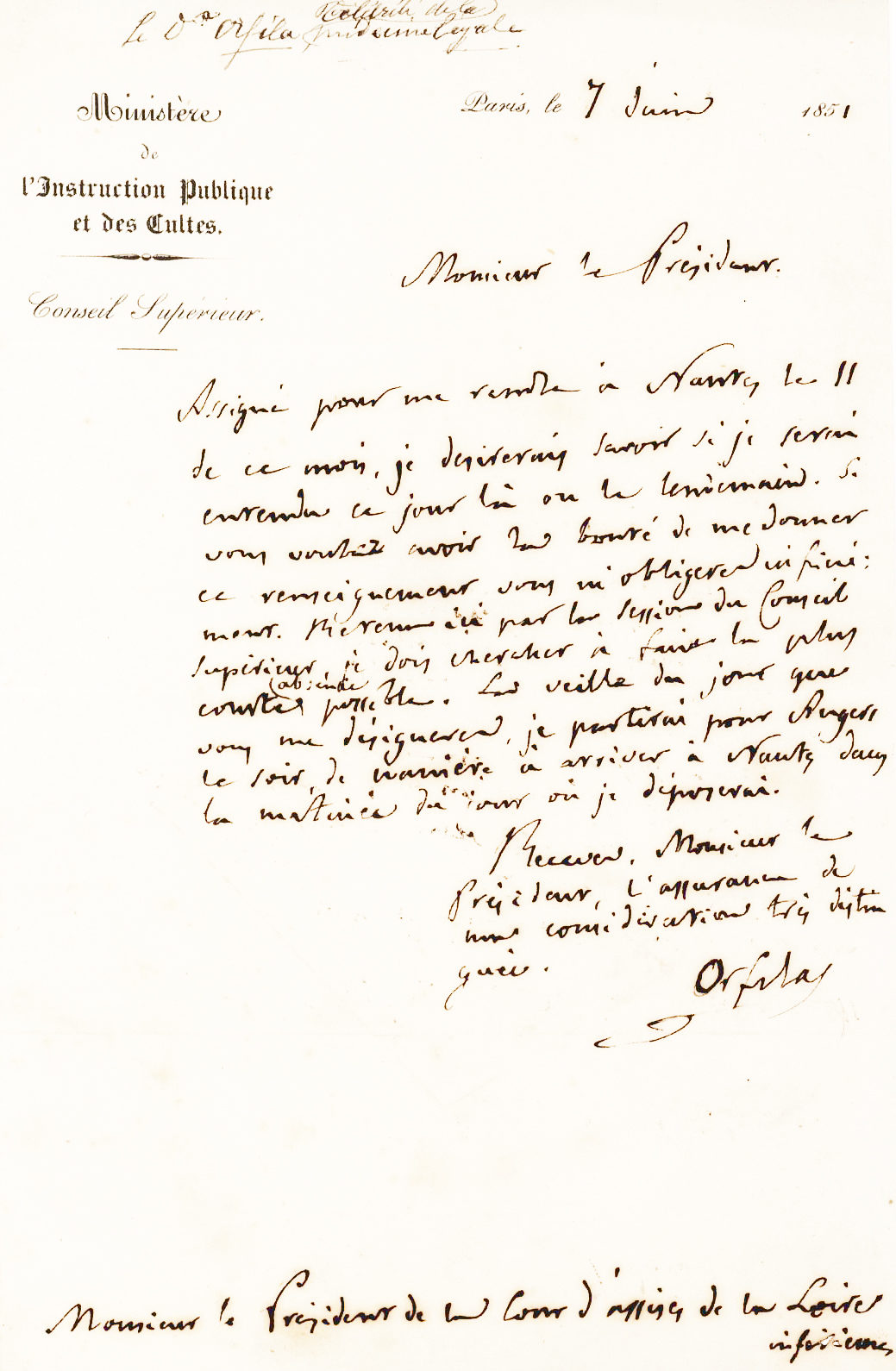 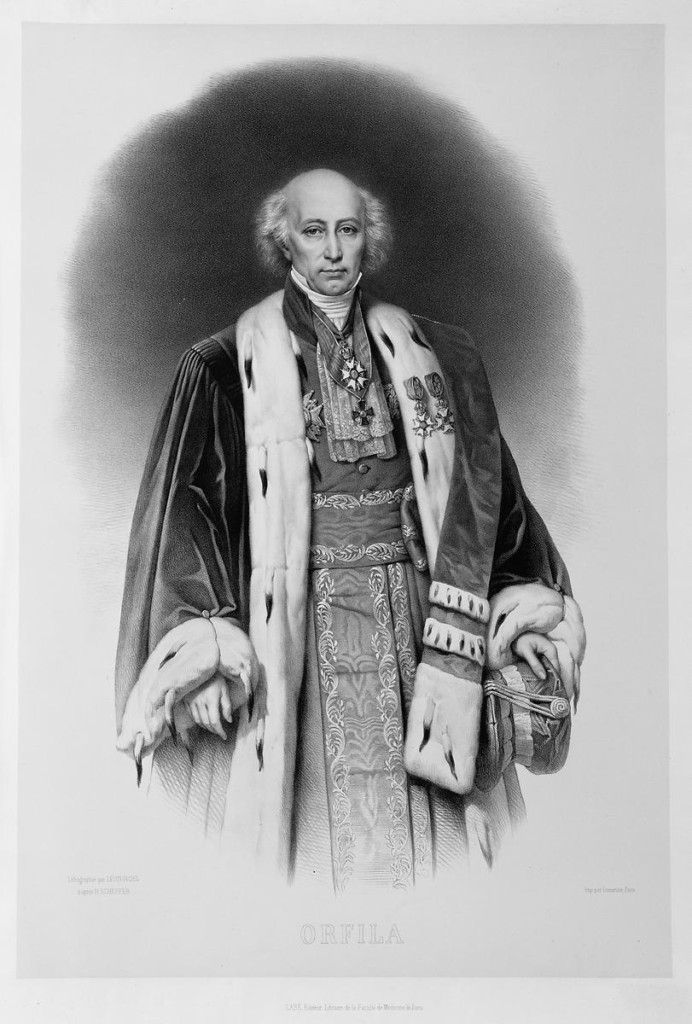 Beginning in 1830, as dean of the Faculty of Medicine, he reorganized the medical school including instituting more rigorous testing. He also established a dissection center, botanical gardens, hospitals, museums and a medical school in Tours. Through the use of analytical chemistry and his own clinical trials, Orfila made significant advances in forensic science and, just as importantly, published his findings making them widely available to “his colleagues in the provinces, doctors, officiers de santé and chemists, who could help spread his ideas on poison among the general population,” (“Mateu Orfila i Rotger (1787-1853): Science, medicine and crime in the nineteenth century,” Contributions to Science, Bertomeu Sanchez).

However, it was as an expert in criminal cases that he became best known, frequently traveling to testify in court. As a result, his name was frequently in the press and “the views he maintained in these trials were passionately discussed for a considerable time, provoking a long debate in and outside academic circles that lasted until after his death,” (ibid.). His monarchist opinions as well as the polarizing nature of some of his experiments and hypotheses led to his removal from his post as dean after the 1848 revolution, but he was reinstated in 1851 and elected president of the Academy of Medicine.

In 1843, Orfila served as an expert before the Court of Assizes of the Loire and subsequently published his “Case of poisoning by a compound of lead, brought before the assize court of Haute-Loire, August 22, 1843, then before the assize court of Puy-de-Dôme, November 29, 1843.” The court case that is the subject of our letter was another case of poisoning, this time by iron sulfate, in which he testified on June 13, 1851 and which he cited in his work on the subject published in the Annales d’hygiène et de mèdicine légale. 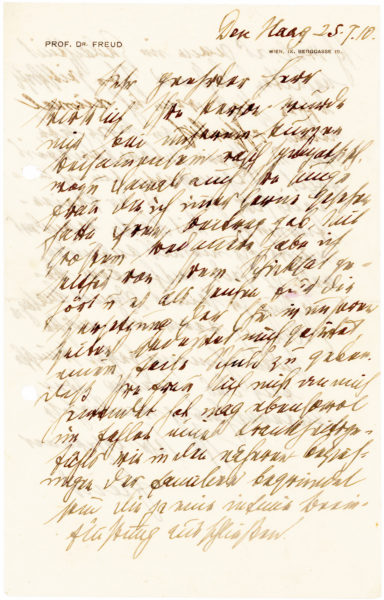 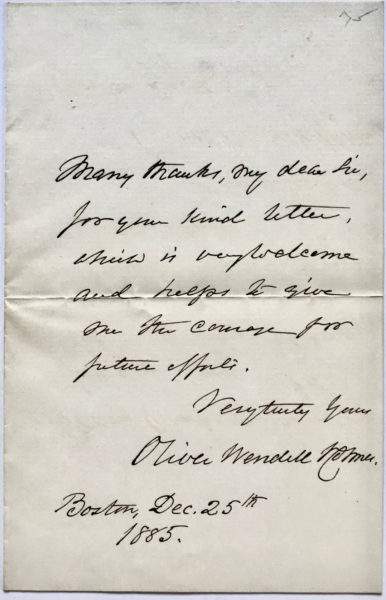 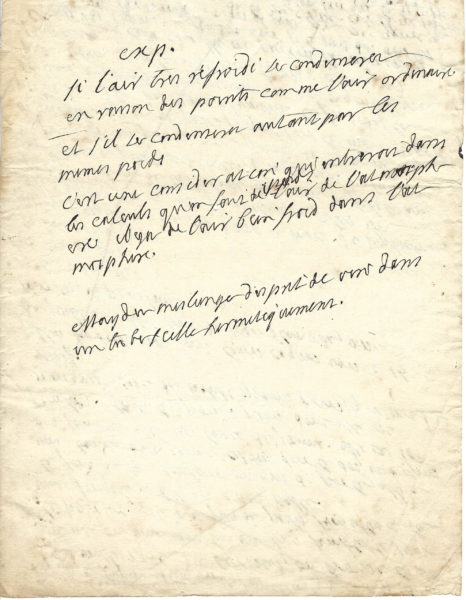