SZOLD, HENRIETTA. (1860-1945). American Zionist and founder of the women’s organization Hadassah. ALS. (“Henrietta Szold”). 2pp. 8vo. Written on a single sheet of her personal stationery on board the S.S. Belkas, April 28, 1924. To English-Jewish activist and author HANNAH BARNETT-TRAGER (1870-1943), whose father Zerah Barnett was one of the founders of Petah Tikvah and Neve Shalom.

“Only the leisure of a sea-voyage gives me the opportunity of replying to your letter of November 12 and acknowledging the receipt of your book, Pioneers in Palestine.

Your letter reached me a day or two before I left America for Palestine, on December 1 of last year. The book had to be forwarded to me in Jerusalem. I confess, however, that to read it I also had to await the leisure of this return trip to the United States. I have just finished it. With my recent experiences in Palestine, among the men and women who constitute the third pioneer movement, fresh in mind, I was particularly well-attuned to your reminiscences. I read the book through at one sitting. I agree with Mr. Zangwill that we need more such books. We need the human documents that will teach us confidence in our ultimate success and so patience to endure and await its coming. 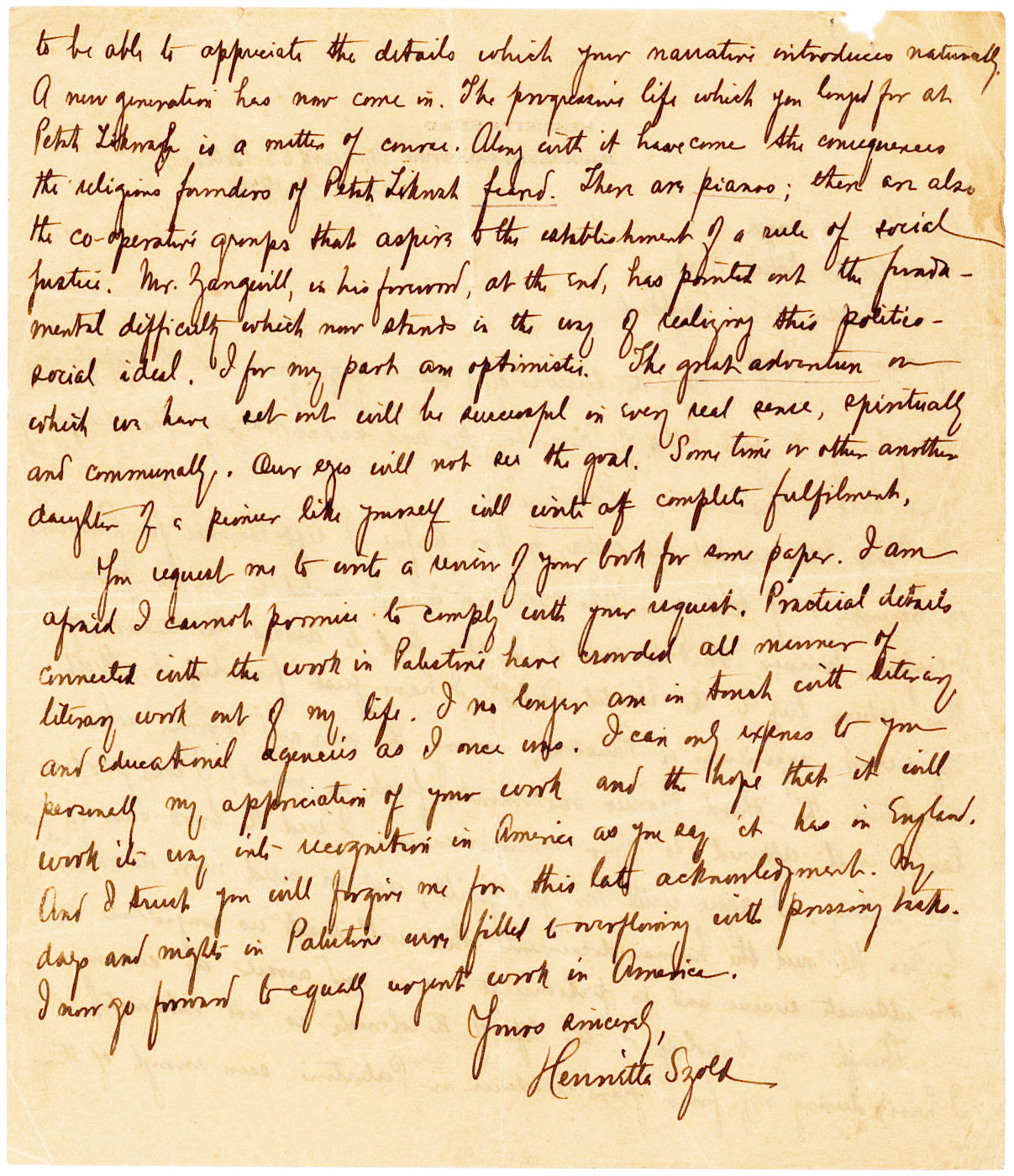 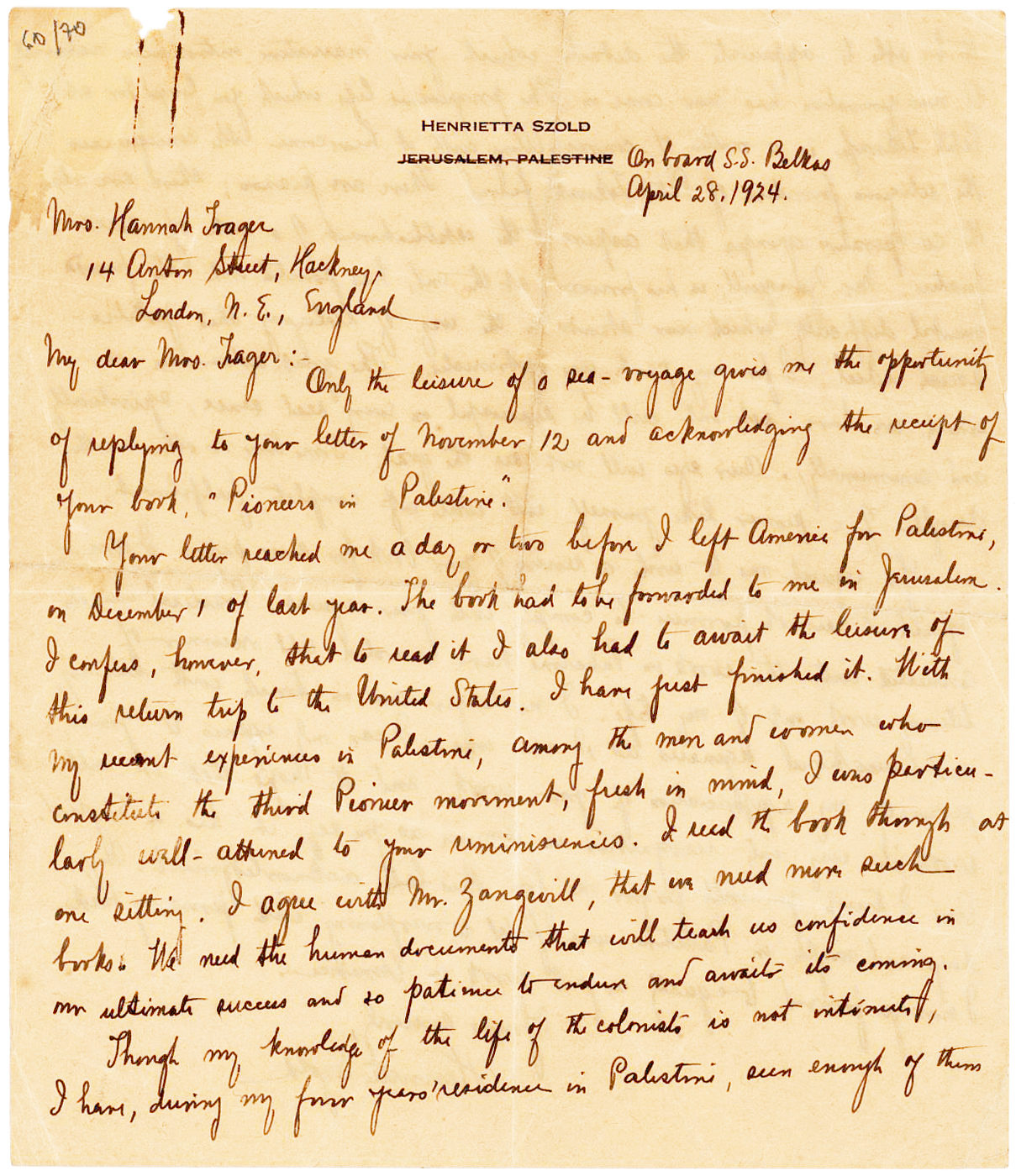 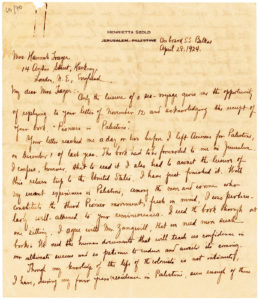 Though my knowledge of the life of the colonists is not intimate, I have, during my four years’ residence in Palestine, seen enough of them to be able to appreciate the details which your narrative introduces naturally. A new generation has now come in. The progressive life which you longed for at Petah Tikvah is a matter of course. Along with it have come the consequences the religious founders of Petah Tikvah feared. There are pianos; there are also the co-operative groups that aspire to the establishment of a rule of social justice. Mr. Zangwill, in his forward, at the end, has pointed out the fundamental difficulty which now stands in the way of realizing this politico-social ideal. I for my part am optimistic. The great adventure on which we have set out will be successful in every real sense, spiritually and communally. Our eyes will not see the goal. Sometime or other another daughter of a pioneer like yourself will write of complete fulfilment.

You request me to write a review of your book for some paper. I am afraid I cannot promise to comply with your request. Practical details connected with the work in Palestine have crowded all manner of literary work out of my life. I no longer am in touch with literary and educational agencies as I once was. I can only express to you personally my appreciation of your work and the hope that it will work its way into recognition in America as you say it has in England. And I trust you will forgive me for this late acknowledgement. My days and nights in Palestine were filled to overflowing with pressing tasks. I now go forward to equally urgent work in America. Yours sincerely…” 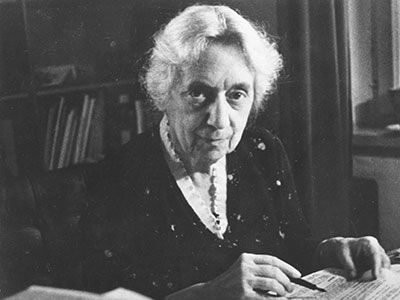 Szold was the eldest daughter of a Baltimore rabbi and active in community service from an early age. She taught Bible courses for adults, established the country’s first school for Russian-Jewish immigrants and, for more than 20 years, worked for the Jewish Publication Society, which published books for the children of Jewish immigrants to teach them about their heritage. In 1909, Szold visited Palestine and, as a result of that experience, founded Hadassah, the Women’s Zionist Organization of America. Hadassah soon had chapters across the U.S., which funded Palestinian educational institutions, hospitals, health clinics, and an anti-malarial and milk distribution program.

In 1920, she moved to Palestine to lead the Hadassah Medical Organization (HMO) for several busy and productive years, alluded to in our letter. After returning to America in 1923, she returned to Palestine two years later to take up the work of HMO once again and, in the decades that followed, Szold made notable contributions to social work as well as heading the Youth Aliyah which rescued thousands of Jewish children from the Nazis. For the latter work, Szold, who had no children of her own, is remembered as the “mother of the Yishuv” and Israel’s mother’s day is celebrated on the day of her death.

“The great adventure on which we have set out will be successful… spiritually and communally. Our eyes will not see the goal. Sometime or other another daughter of a pioneer like yourself will write of complete fulfilment.”

Petah Tikvah was founded in 1878 by religious Orthodox Jews including Zerah Barnett, the father of our letter’s recipient. Abandoned after outbreaks of malaria in 1880, it was settled a second time in 1883 by Bilu pioneers and with financial assistance which Barnett secured from Baron Edmond de Rothschild who provided funds to drain the swampy land among other projects. The first modern Jewish agricultural settlement in the Yishuv, it earned the moniker “Mother of the Moshavot.” By the 1920s, Petah Tikvah became the site of industrial development and it has since become one of Israel’s most populous cities.

Trager moved with her family numerous times between Israel and London, residing in Petah Tikvah during its early decades, detailed in her 1923 memoir Pioneers in Palestine: Stories of one of the first settlers in Petah Tikvah. Widowed in 1888, Trager married a chemist (later disabled by tuberculosis), and worked as a midwife to support her family. During World War I, she aided seriously ill Jewish refugees and founded the Jewish Free Reading Room. The year of our letter, Trager’s adult daughter committed suicide for which Trager was charged with murder, but was cleared of the charges two months later.

British author and Zionist Israel Zangwill (1864-1926) was the son of Jewish emigres from the Russian Empire known for his influential and popular fiction as well as his activism surrounding Jewish emancipation, assimilation, Zionism, pacifism, feminism, and suffrage. After becoming disillusioned by Theodor Herzl’s vision of Zionism, he founded the Jewish Territorial Organization which sought to establish a Jewish homeland in any available locale, entertaining plans for Canada, Australia, Uganda, and Libya. He remained skeptical that a Jewish state could be established in an Arab region. His popular works, for which he is dubbed “the Dickens of the Ghetto,” include Children of the Ghetto: A Study of a Peculiar People and its four sequels, The Big Bow Mystery, Chosen Peoples, The Melting Pot, and The Bachelors’ Club.

Szold has crossed out “Jerusalem, Palestine” on her printed stationery and added “On board S.S. Belkas,” which operated between Cyprus and Egypt. Written in her minute hand, but legible hand. Folded with a paperclip mark and small tear in the upper left margin. Lightly creased and folded. In very good condition. Very rare in ALS. 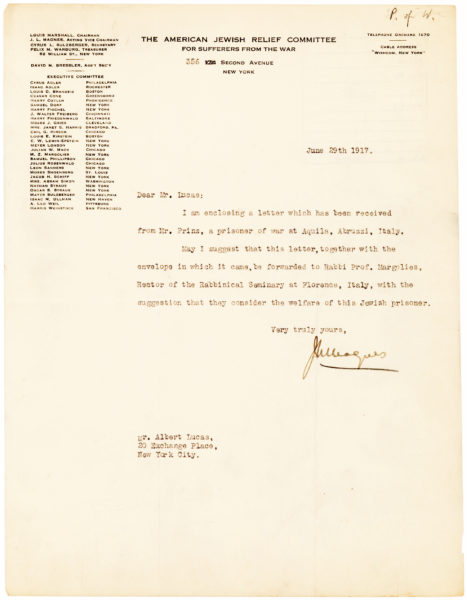