“I gave the directions asked for by your letter of June 29th for the preparation of a statement regarding Mr. Weightman’s service while he was on the rolls of the War Department, but no record has been found except as follows: He was appointed by General Alger May 26, 1899, as Assistant to the Commissioners of the Vicksburg National Military Park, at a compensation of $200 per month. The oath of office was taken on the first of June 1899. He resigned September 17, 1900. There is nothing to show how much or what kind of assistance he rendered to the Commission. He had previously been Secretary of the Commission to investigate the conduct of the war with Spain, but I cannot find that there is any record in the War Department relating to that. I hope you are not allowing yourself to be too much disturbed about the matters in the Post Office Department which hark back to your time as Postmaster-General. So far as I can see, every thinking person realizes that in time of war, and under an extension of the postal service to new countries and new conditions, the President must necessarily strain and in many instances depart from the rules which he has made for the ordinary conditions of peace, and of course what the Postmaster-General did the President did. Moreover, so far as I can see, nobody cares a baubee whether the Civil Service rules were strained or not under the circumstances which existed while you were Postmaster-General. Please give my kind regards to Mrs. Smith, and believe me always, Faithfully yours…” 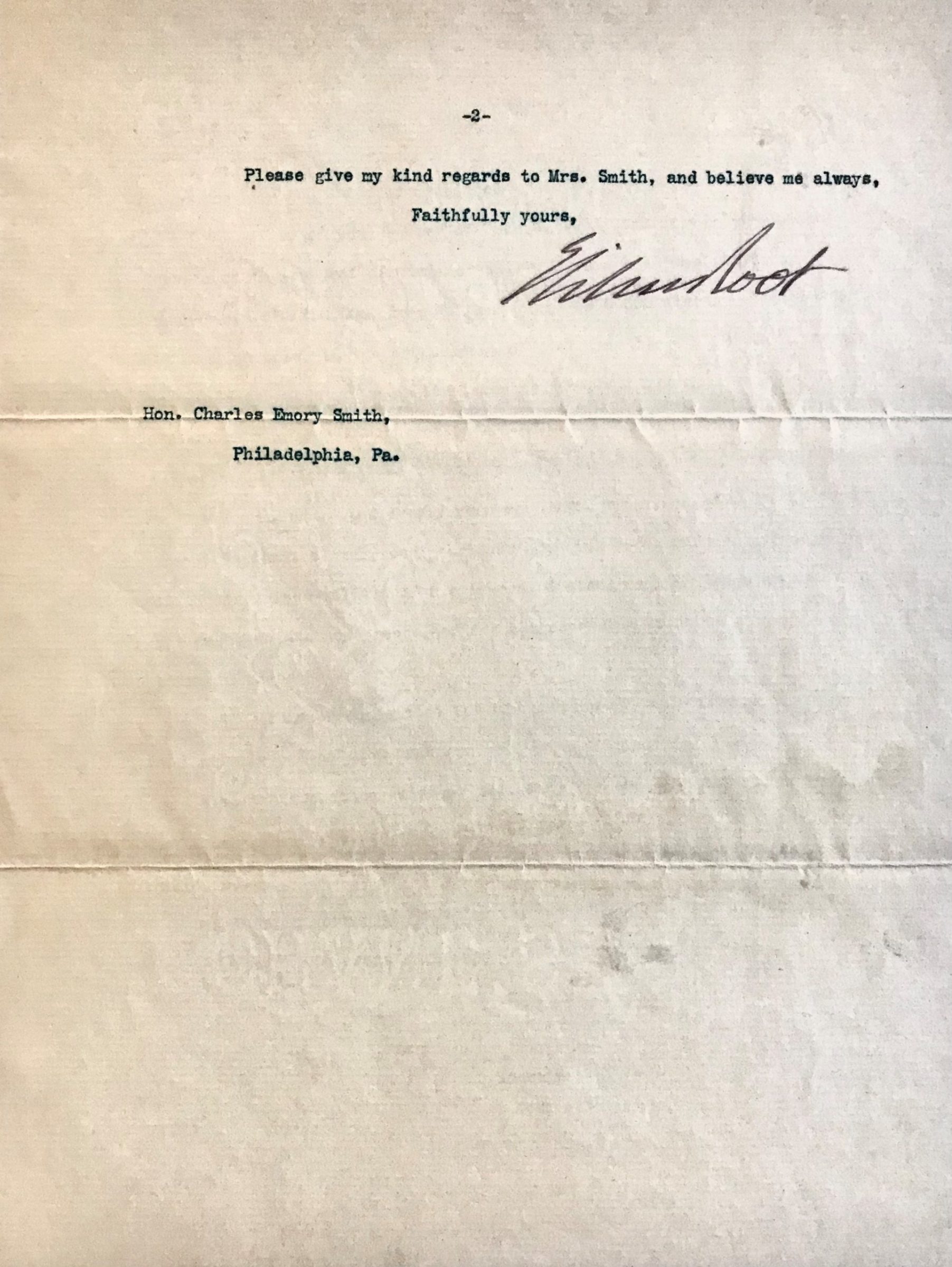 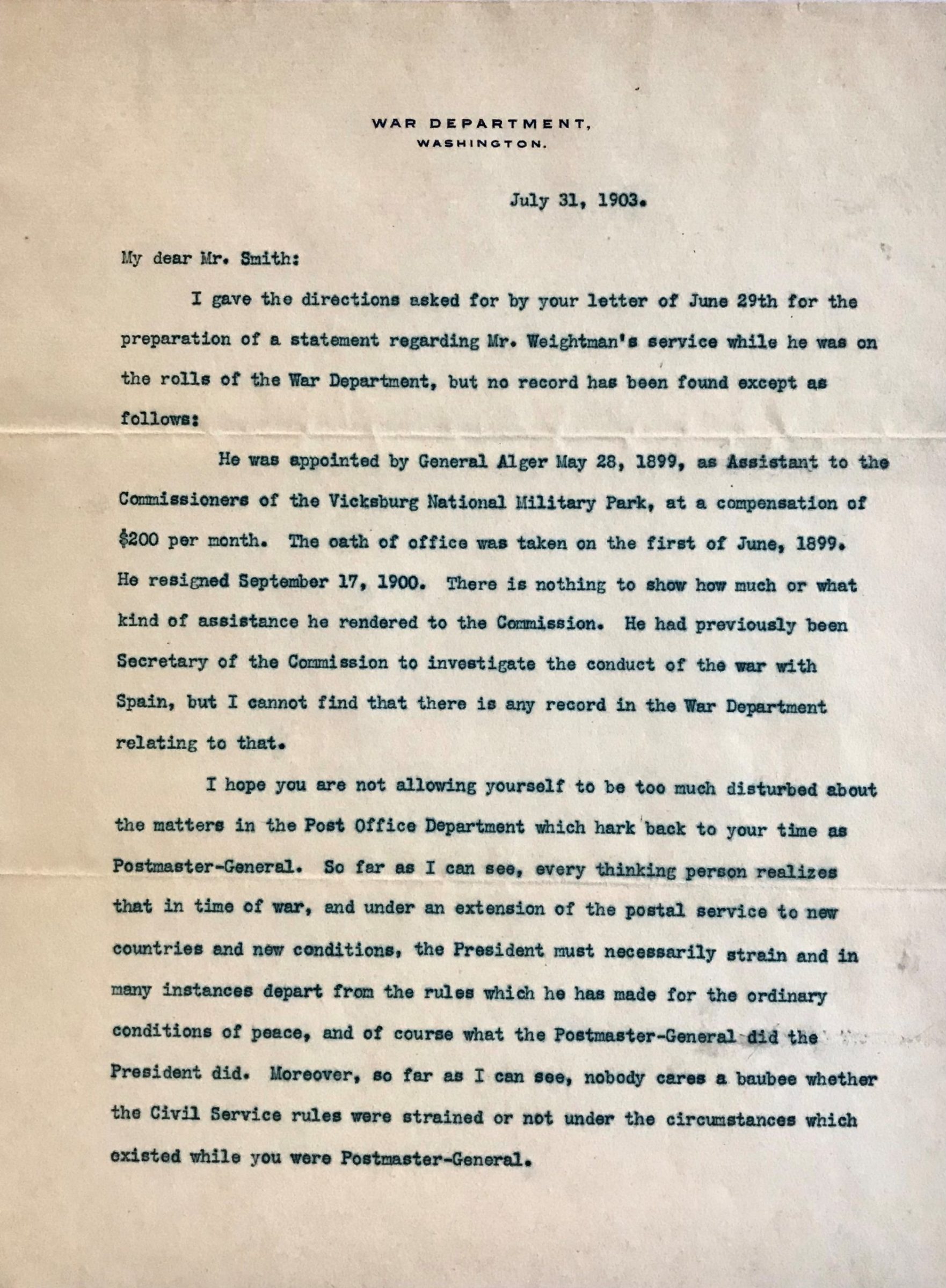 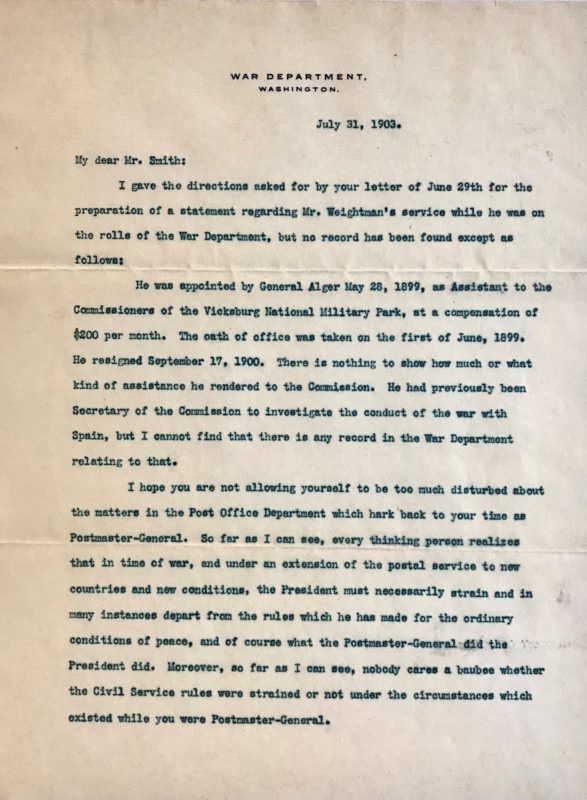 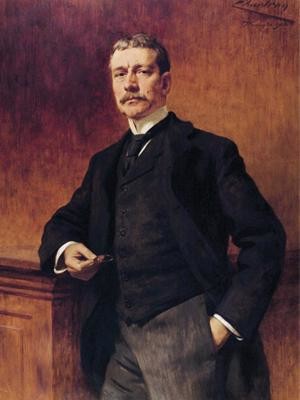 Elihu Root was appointed Secretary of War by President McKinley to replace McKinley’s friend, General Russell A. Alger (1836-1907). A self-made man, Alger rose to the position of general during the Civil War to become a logging magnate with successful companies in Michigan and Washington. Alger is considered to have been the most incompetent secretary of war in the history of the position due to his conduct during the Spanish-American War. Although he had achieved great military success during the Civil War, he was slow to allocate funds to Cuba and made unwise decisions, including the appointment of the infamous William Shafter to lead the Cuban expedition. For decades afterward, “Algerism” was a synonym for venality and incompetence in government bureaucracy. After the battles of San-Juan Hill and El Caney, the American military advance in Cuba stalled and frontline journalists blamed General Alger. The New York Herald and other newspapers spent the better part of the summer campaigning for Alger’s removal and Root was appointed to replace him after his resignation in 1899.

Alger then became one of five commissioners of the new Vicksburg National Military Park which was established by the War Department on February 21, 1899. The park was part of the new spirit of cooperation between Union and Confederate officers during the 1880s, and founding members of the park sought to provide a Union and Confederate perspective of the famous battle. After Michigan Senator James McMillan’ 1902 death while still in office, Alger was appointed to fill his seat. He was elected Senator the following year but, like McMillan, died in office in 1907.

Root’s appointment as secretary of war was met with confusion from the public. Although he was a renowned New York lawyer, he was virtually unknown throughout the rest of the country, and he had very little military experience. However, McKinley insisted that he needed a lawyer in the post instead of a military man. As part of Root’s public effort to distance himself from the decisions of his predecessor, Root reorganized the War Department. He was responsible for enlarging West Point and establishing the U.S. Army War College as well as the General Staff. He changed the procedures for promotions and organized schools for the special branches of the service. He also devised the principle of rotating officers from staff to line. Root served as secretary of war under McKinley and Theodore Roosevelt until his resignation in 1904, upon which he returned to private practice. When Roosevelt offered him the position of secretary of state in 1905, Root returned to the cabinet and instituted another campaign of reorganization including bringing the consular service under the Civil Service’s direction and removing it from the corrupt “spoils system.” Root was later elected to the Senate where he represented New York from 1909 to 1915. Despite his ascendancy in politics, Root refused to run for reelection and turned down the Republican presidential nomination; having reached the age of 70, Root claimed he was too old to be president.

Smith was an eminent journalist and supporter of the Republican Party, of which Root was a member. Following a diplomatic posting in Russia, he was appointed postmaster general by President McKinley in 1898. During his four-year tenure he greatly expanding the rural delivery system. Nevertheless, Smith was an ineffective administrator under whom corruption flourished, and it is to this situation to which Root is likely referring when he notes that Civil Service rules were “strained.” After leaving office Smith published The Philadelphia Press from 1880 until his death, during which time the paper published Stephen Crane’s novel The Red Badge of Courage in serialized form.

Folded and in fine condition, with the original envelope. 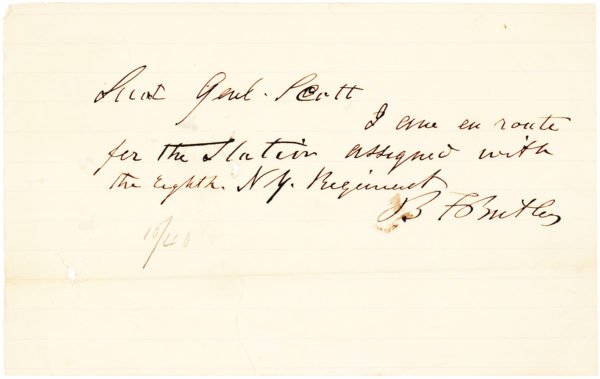 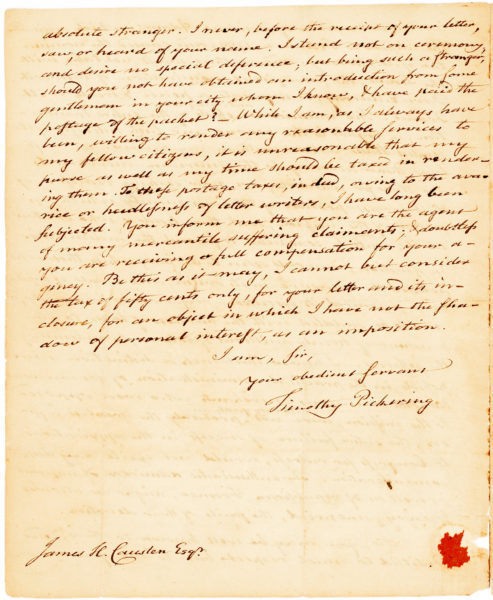