EBAN, ABBA. (1915-2002). Israeli politician, diplomat and academic. TLS. (“Abba Eban”). 1p. 4to. Rehovot, July 5, 1960. On the illustrated letterhead of the International Conference on Science for the Advancement of New States at the Weizmann Institute of Science. To Yosef Shapira of the Israel Electric Company in Tel Aviv. In Hebrew with translation.

“As part of the preparations for the International Conference on Science for the Advancement of New States, we would like to establish a committee that will review and prepare proposals for follow-up actions to be submitted to the conference participants for discussion.

Representatives of the University, the Technion, the Weizmann Institute of Science, the Ministry of Foreign Affairs, ORT and the National Council for Research and Development will participate in this committee. 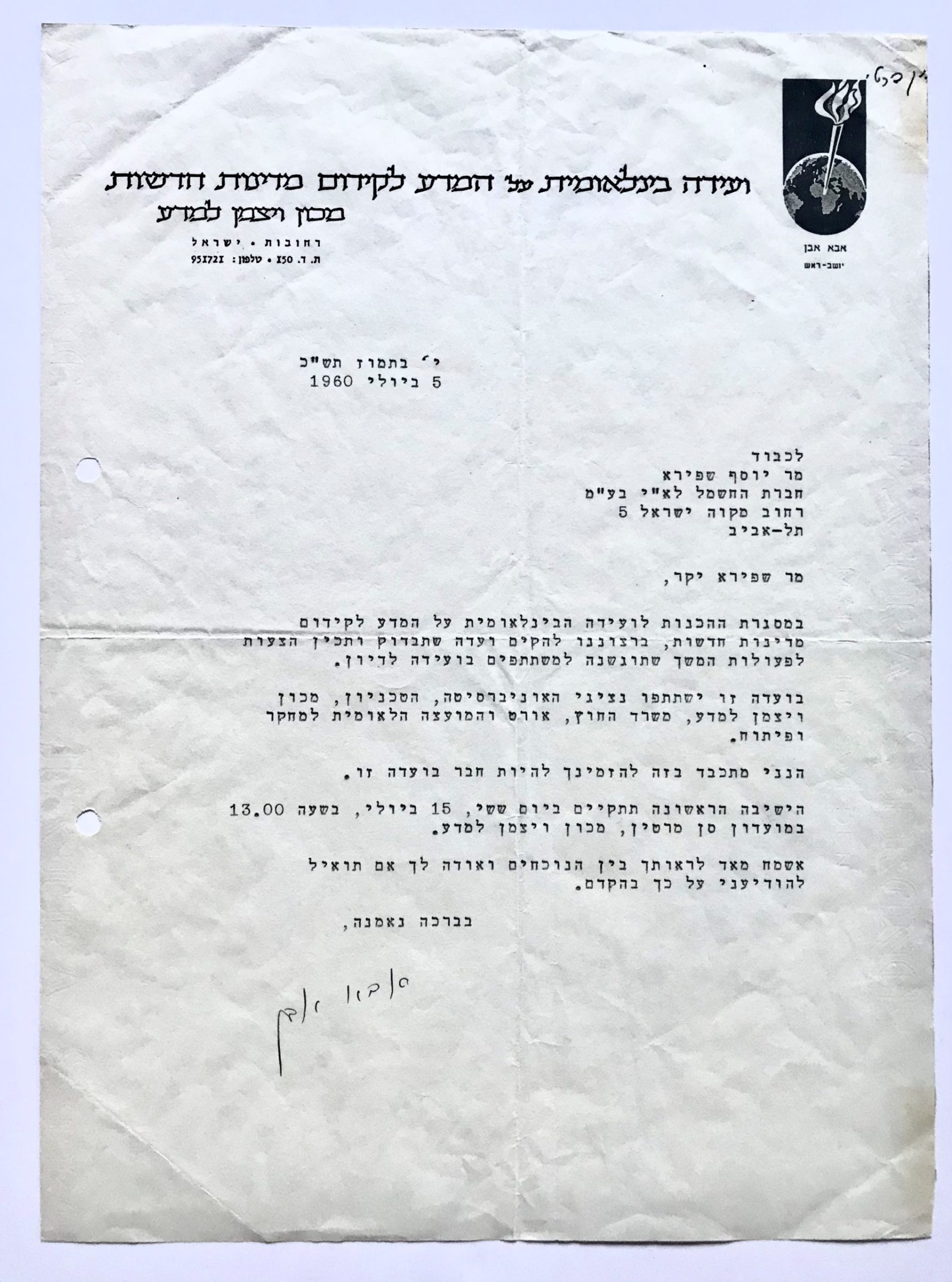 I have the honor to invite you to become a member of this committee.

The first meeting will be held on Friday, July 15, at 1 p.m., at the San Martin Club, Weizmann Institute of Science.

I would be very happy to see you among those present and I would appreciate it if you would let me know about it soon….”

Although Eban’s parents were Lithuanian Jews, he was born in South Africa and raised in the United Kingdom where he enjoyed both a religious and classical education, the latter at Cambridge. As a youth, Eban was a member of the Federation of Zionist Youth and edited the organization’s journal The Young Zionist. He was a research fellow at Cambridge’s Pembroke College from 1938-1939 and worked at the World Zionist Organization before serving in the British Army during World War II. Stationed in Egypt and the British Mandate of Palestine, Eban, who was fluent in 10 languages, joined British intelligence in Jerusalem where he helped train the Mandate’s Jewish residents to resist a possible German invasion. After the war, Eban set up the Middle East Centre for Arab Studies on behalf of the Foreign Office. 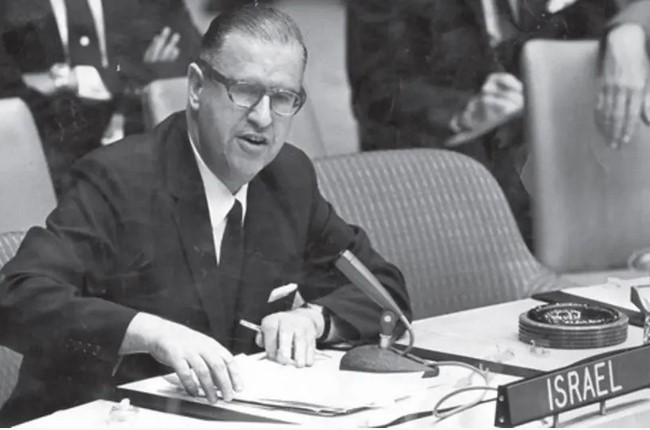 In 1959, Eban, who had changed his first name from Aubrey to Abba, the Hebrew word for “Father,” was elected to the Knesset. He went on to hold several cabinet posts, as David Ben-Gurion’s Minister of Education and Culture and, later, Minister of Foreign Affairs. He served as Deputy Prime Minister under Levi Eshkol. After party differences ended his political career, he held several academic positions at Princeton, Columbia and George Washington universities. His books include Heritage: Civilization and the Jews, Promised Land, My Country: The Story of Modern Israel, Abba Eban, Voice of Israel, The Tide of Nationalism, My People, the New Diplomacy, Maze of Justice, Personal Witness, and Diplomacy for the Next Century. Eban wrote our letter in his capacity as chair of the International Conference on Science for the Advancement of New States.

The recipient of our letter may be influential Israeli businessman and politician Avraham Yosef Shapira (1921-2000), chair of the Tel Aviv branch of the Ultra-Orthodox Agudat Yisrael political who led the party in the Knesset from 1981-1988 and again from 1992-1996. The Israel Electric Corporation is the government-owned electric utility for the state.

Folded and creased with file holes in the left margin and a pencil note in the lower margin. In fine condition.