“Ever so many thanks for your most kind letter. The lady who owns me has developed such a hearty cold that her departure for town must be put off for a week. I hope you will not withdraw the light of your countenance from a long-suffering man and that you’ll let me come to Burys Court this next Thursday week. I hope that my ‘able and respected’ collaborator is leading an orderly and domestic life. Pray give him my love and be good enough to remember me affectionately to Miss Pinker when you write. My wife (in a very hoarse voice) sends you her love and her thanks for your letter. Believe me dear Mrs. Pinker your very faithful and affectionate friend and servant…” 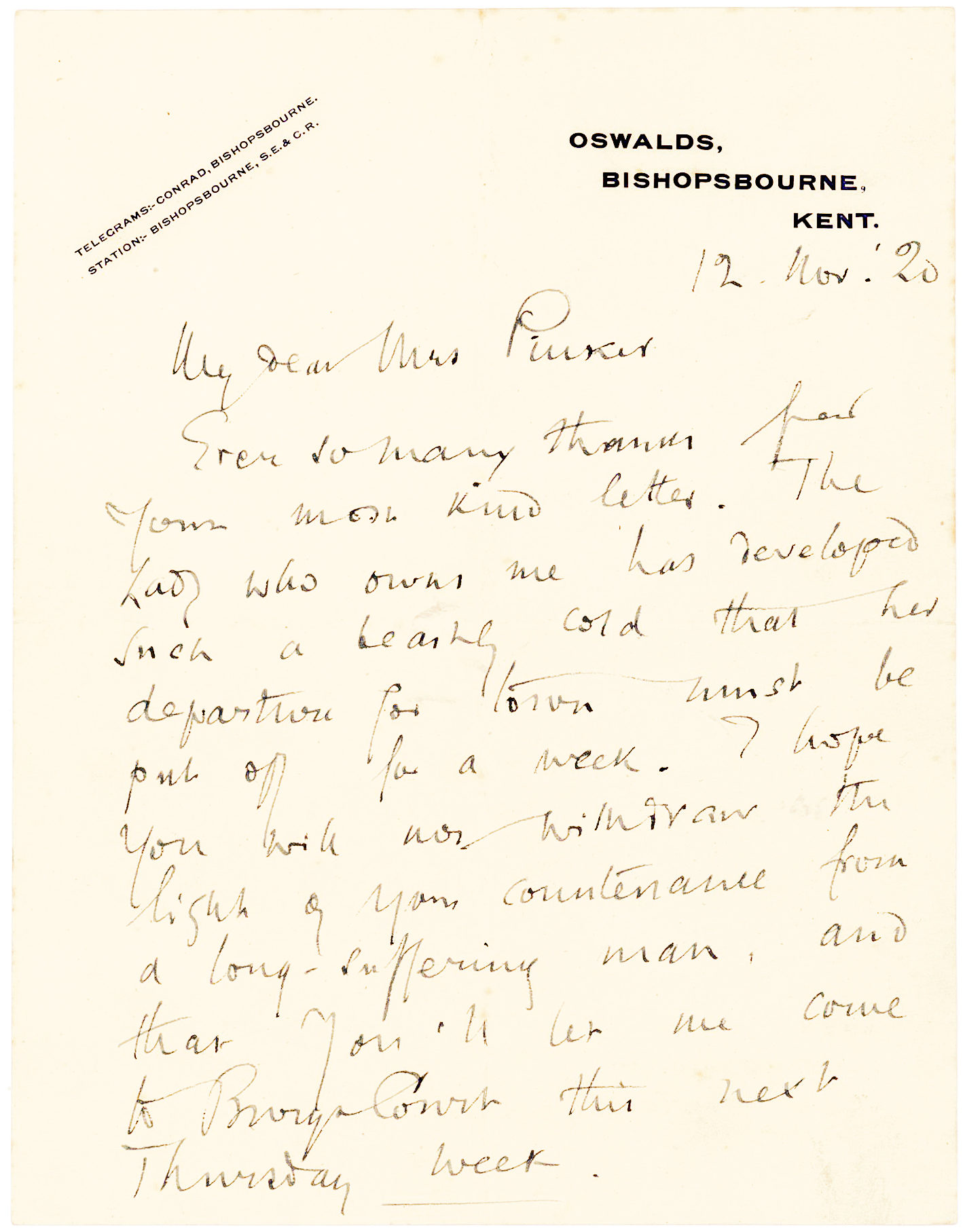 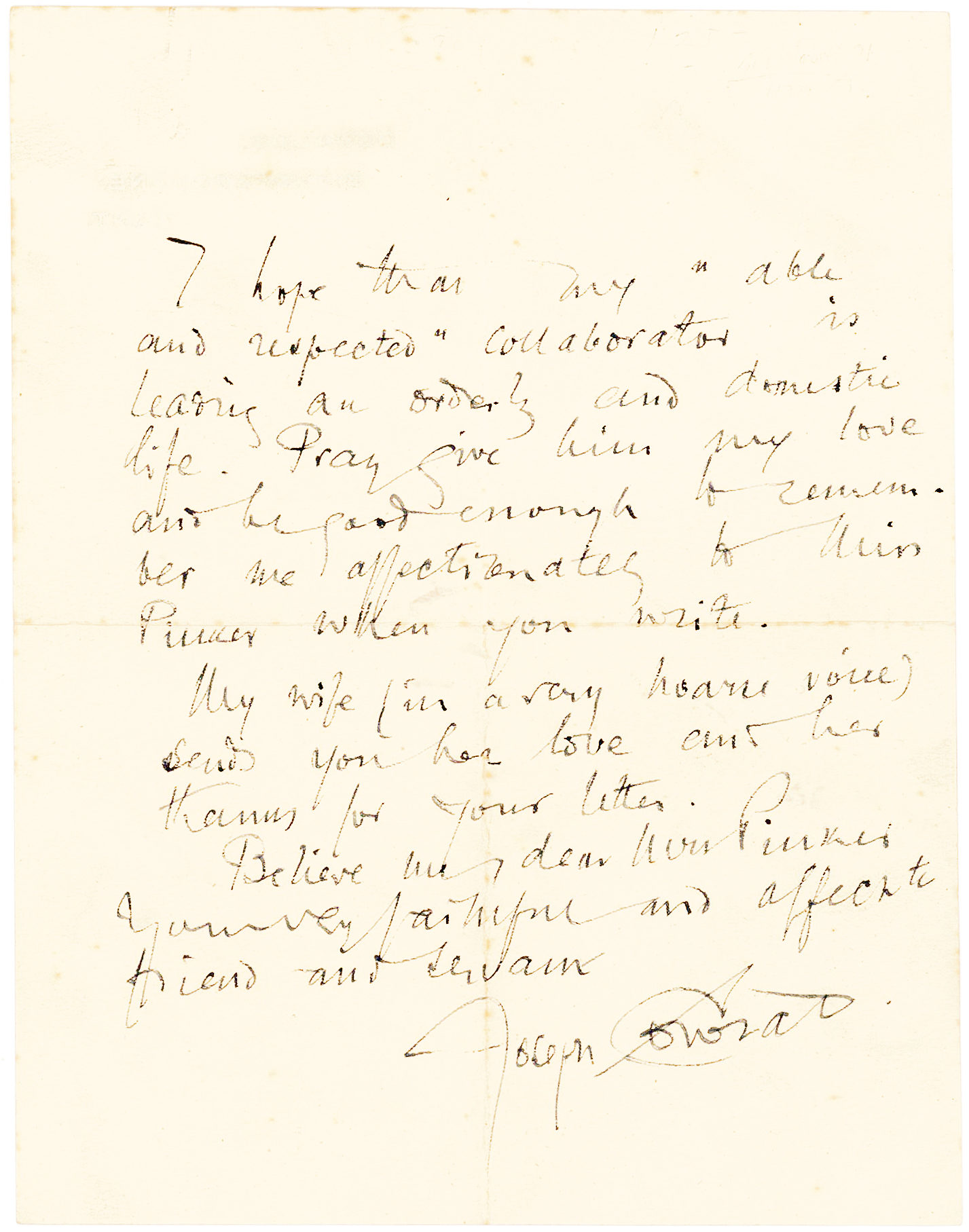 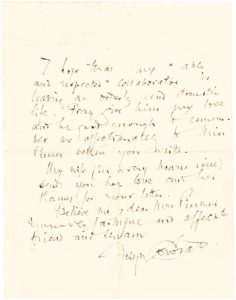 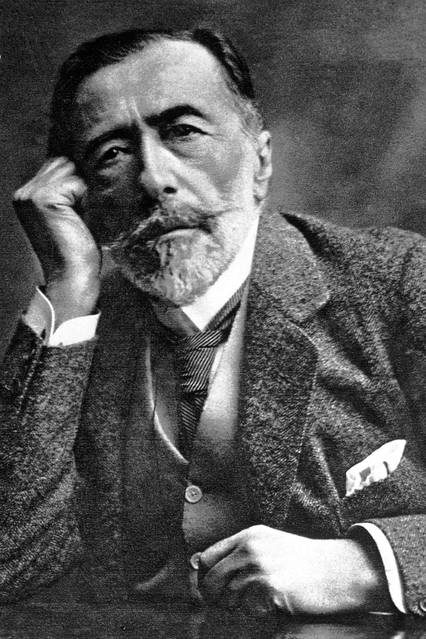 Joseph Conrad left his native Poland at 17 to spend the next twenty years as a seaman on French and British ships where he learned French and English. During this time, he began to write, and his adventures became the inspiration for his novels Almayer’s Folly (1895), Lord Jim (1900) and Typhoon (1903), as well as numerous short stories and memoirs. In 1889, he temporarily retired from his seafaring life because of poor health, and it was then that he started writing novels. Conrad gave up his adventurous life entirely after 1894 and continued to write exclusively in English, becoming one of the greatest prose stylists in the language. A careful and subtle author, Conrad brought a new sensibility to modern English literature, one in which the perfection of language – its meaning and form – remained the author’s highest goal.

Conrad married Jessie George (1873-1936), a typist, in 1896. His decision to wed a working girl 16 years his junior, astonished his friends but the union was a success despite each partner suffering poor health, which he notes in our letter. Following his death she penned Joseph Conrad as I knew Him and Joseph Conrad and His Circle.

James Pinker was one of the most influential literary agents of his day. From his offices in London’s Strand he published the work of H.G. Wells, Arnold Bennett, Oscar Wilde, Somerset Maugham, and Conrad, whose career he helped cultivate. Between 1899 and 1922, Conrad is known to have written Pinker more than 1200 letters, (“Conrad and Pinker: Some Aspects of the Correspondence,” Journal of Modern Literature, Karl). In 1920, Conrad published The Rescue, which he had begun decades later and which Pinker helped him bring to fruition.

Our letter to Mrs. Pinker regards a visit to the couple’s country house at Bury’s Court in Surrey, which belonged to his Mrs. Pinkers’ family and is now a school. Miss Pinker is Mary Oenone Pinker (1903-?), the youngest of their three children.

Written on the recto and verso of a single sheet. Folded into quarters and in fine condition.