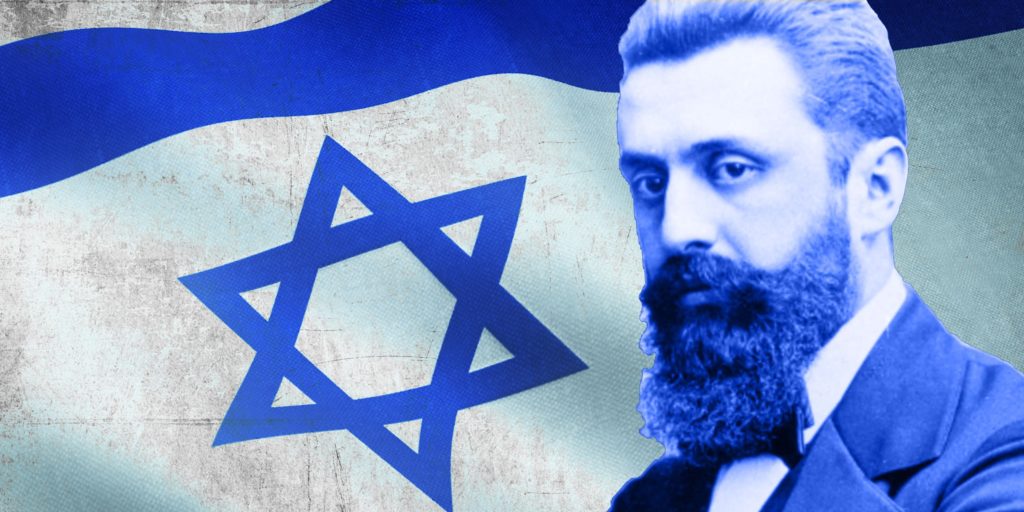 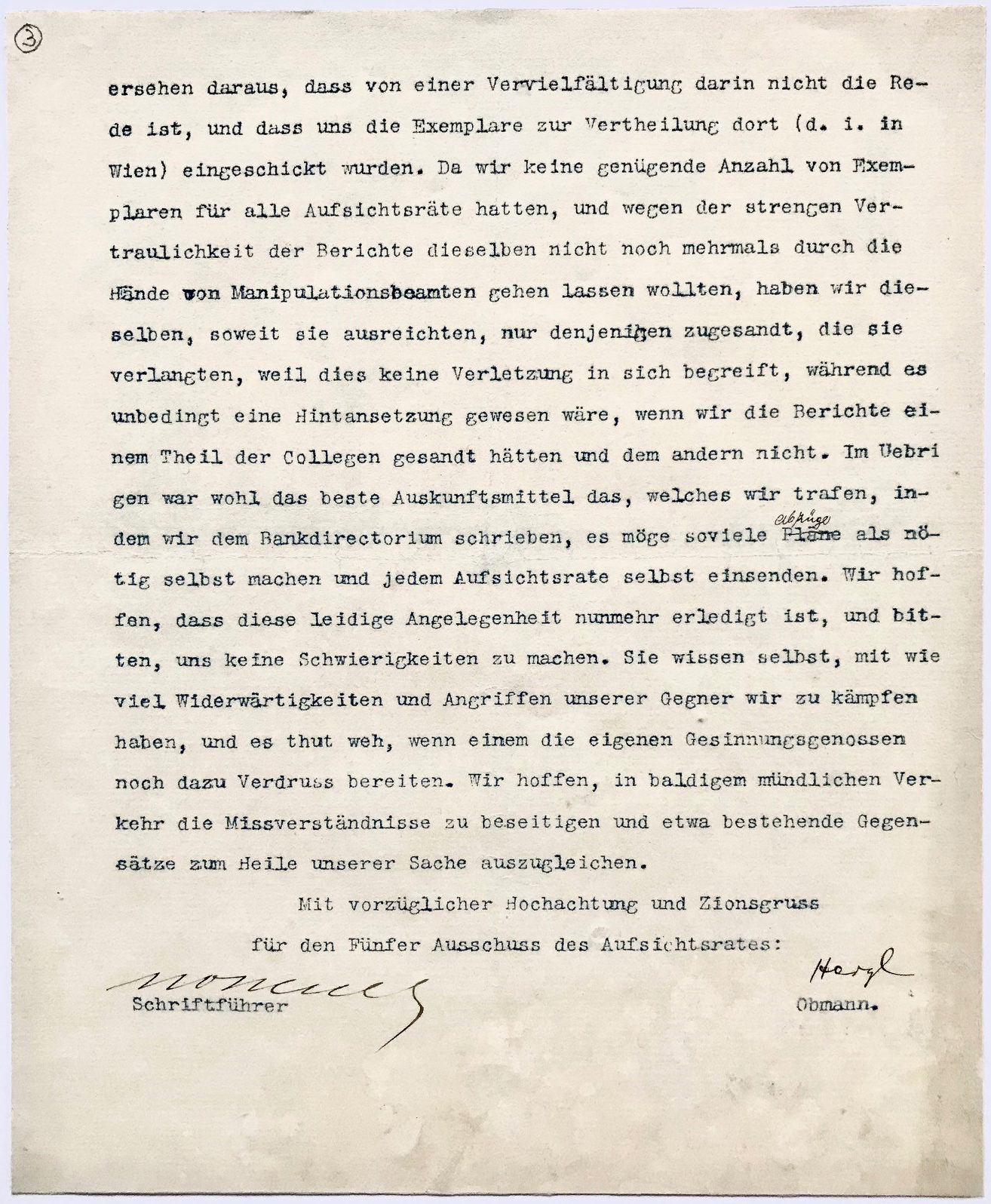 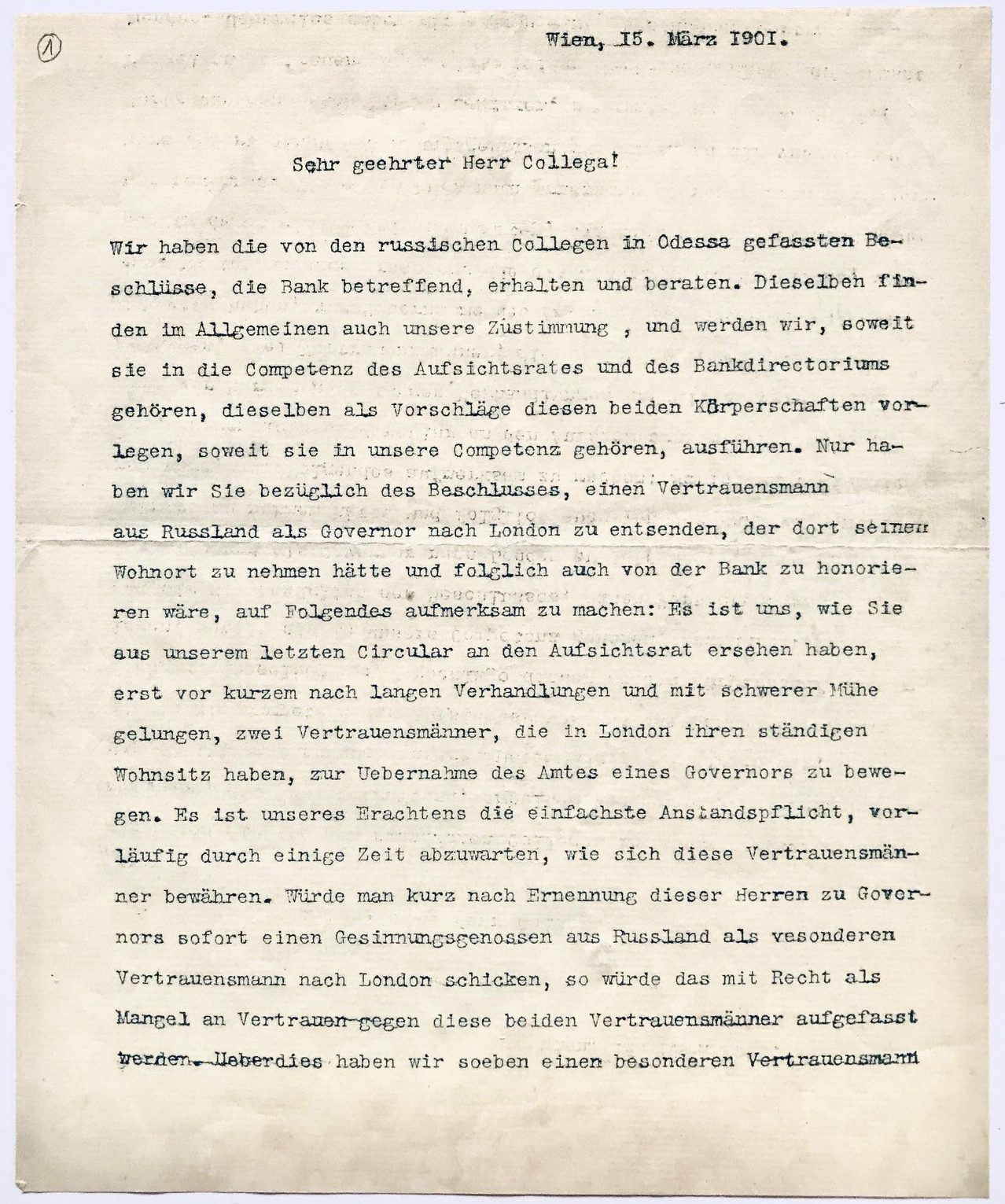 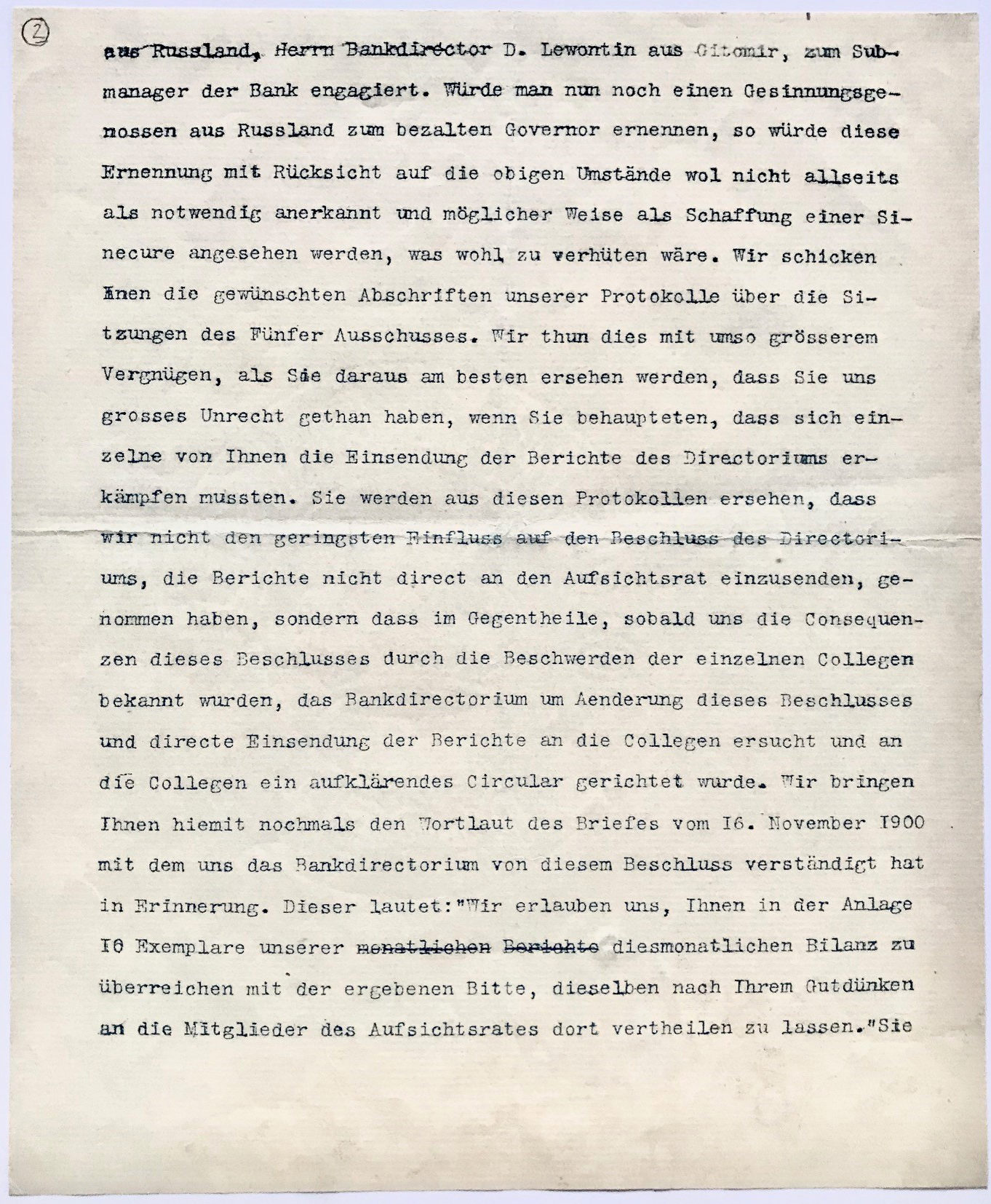 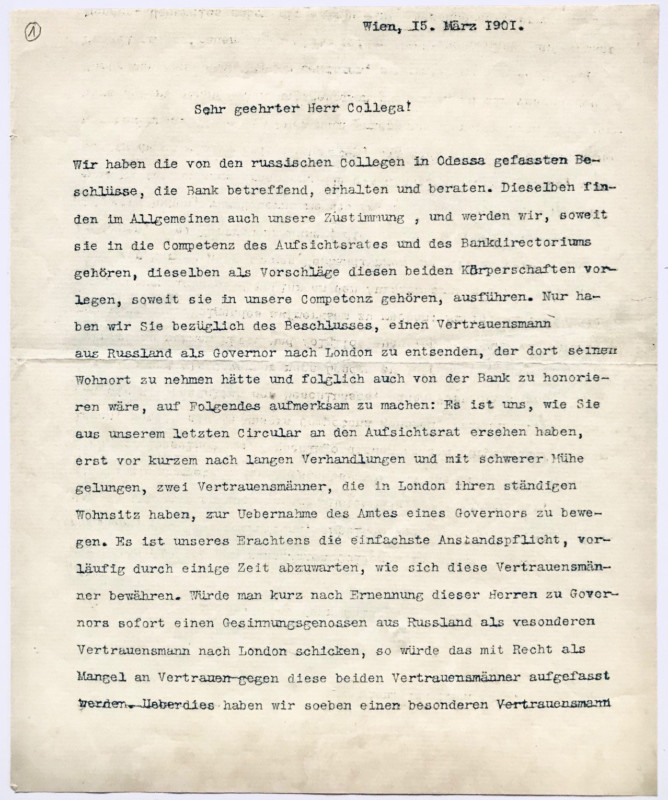 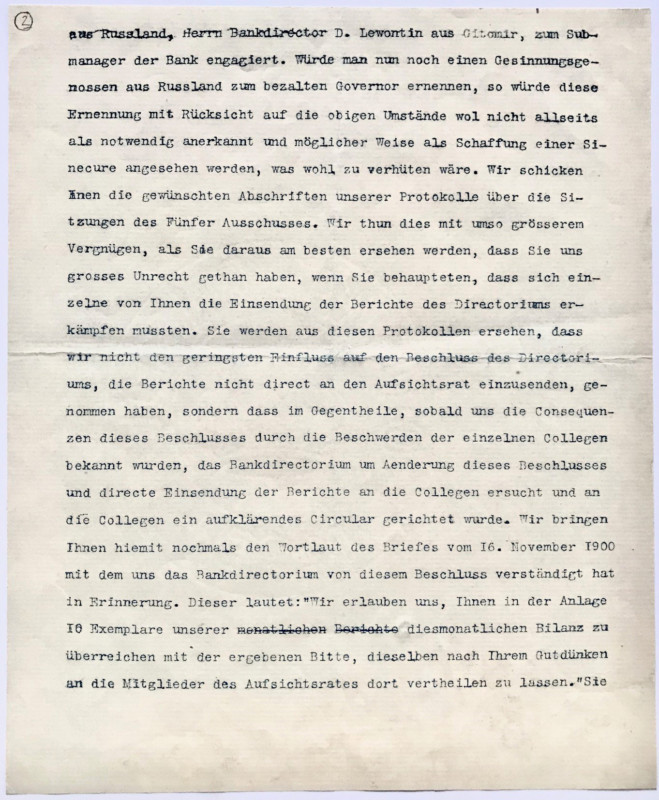 “We have received and discussed the decisions made by the Russians colleagues in Odessa, regarding the bank. In general, they meet with our approval, and we will, if they follow the competence of the supervisory board and the bank management, present the same proposals to these two bodies, insofar as they fall under our jurisdiction. As regards the decision to send a representative from Russia to London as governor who would have to reside there and would therefore also be compensated by the bank, we would like to draw your attention to the following: We have, as you have seen from our previous circular to the supervisory board, only recently, after long negotiations and with great difficulty, succeeded in persuading two representatives, who have their permanent residence in London, to take over the office of governor. In our opinion it is the elementary duty of decency to wait for some time to see how these representatives prove themselves. If one were to send a like-minded comrade from Russia to London as a special representative shortly after these gentlemen were appointed governors, this would rightly be viewed as a lack of trust in these two representatives. In addition, we have just hired a like-minded comrade from Russia, a bank director, Mr. D. Lewontin from Gitomir, as the bank’s sub-manager. If one were to appoint a like-minded fellow governor from Russia, this appointment would not be recognized by all as necessary in view of the above circumstances and would possibly be seen as the creation of a sinecure, which should be avoided. We will send you the requested copies of protocols from the meetings of the ‘Funfer-Ausschuss’ [“Committee of Five”]. We do this with great pleasure, as you will clearly see from it that you have done us a great injustice when you asserted that some of you had to fight for the submission of the reports of the directory. You will see from these protocols that we did not take the slightest cash flow on the decision of the directorate, not to send the reports directly to the supervisory board, but rather that we did not take the same part as soon as we became aware of the consequences of this decision through the complaints of the individual colleagues, the bank directors asked to change this decision and to send the reports directly to the colleagues, and an informative circular was sent to the colleagues. We would like to remind you, once again, of the wording of the letter dated November 16, 1900, with which the bank management notified us of this resolution. It reads: “We allow ourselves to submit 10 copies of our monthly balance sheet to you with the submitted request that the members of the supervisory board receive them there at your discretion.” You can see from this that there is no mention of a reproduction in it, and that the copies were sent to us for distribution there [i.e., in Vienna]. Since we did not have enough copies for all the supervisory boards, and because of the strict confidentiality of the reports, we did not want them to go through the hands of manipulative officers more than once. We only sent them, as far as they sufficed, to those who requested them, because this in and of itself does not cause any harm, but we would have been negligent if we had sent the reports to one group of colleagues and not to the other. By the way, the best means of information was probably the one we chose, in which we wrote to the bank directors that they could make as many plans as necessary themselves and send them to each supervisory board. We hope that this unfortunate matter is now resolved and ask (you) not to cause us any difficulties. You know for yourself how many adversities and attacks from our opponents we must fight, and it hurts when one gets annoyed with one’s like-minded people. We hope to clear up the misunderstandings during an early verbal discussion and settle any existing conflicts for the sake of our cause.

As the Paris correspondent for the Neue Freie Presse, Herzl was deeply affected by the infamous Dreyfus Affair, the 1894 conviction and exile of an innocent French-Jewish army officer, whose trial Herzl covered in his paper. As a firsthand witness to the rise of anti-Semitism in France, Herzl wrote The Ghetto, a drama focused on Jewish-Christian relations. It was during this same period that he committed his life to the formation of a Jewish state. Herzl’s most influential work, Der Judenstaat, a practical outline for the creation of a Jewish homeland, appeared in early 1896. His ideas were eagerly embraced, and the First Zionist Congress met in Basel in 1897, where it established the World Zionist Congress under Herzl’s direction.

The congress also created the Jewish Colonial Bank, incorporated in London the following year, to amass the necessary capital for founding a Jewish homeland through the National Fund. “It was to take more than three years before the share capital was sufficiently subscribed by Jews from all over the world for the bank to begin operation. To ensure maintenance of political control, founder shares were held by the World Zionist Organization. Herzl headed the list of the bank’s council members,” and served as chairman and head of the “Funfer-Ausschuss” (“Committee of Five”), (Israel: A History, Gilbert).

Our letter, regarding the bank matters, mentions Belorussian Zionist Zalman David Levontin (1856-1940), who had established a short-lived settlement in Palestine in 1882. After joining the Jewish Colonial Trust in 1901, he opened a branch of the Anglo-Palestine Company bank in Jaffa in 1903 and helped purchase land and establish numerous settlements in Erez Israel. Our letter was written the same year as the Fifth Zionist Congress, which organized the Jewish National Fund to purchase land in Palestine. It was during the 1901 Basel Congress that the famous photograph of Herzl overlooking the Rhine from the balcony of his room at the Three Kings Hotel was taken.