HERZL, THEODOR. (1860-1904). Hungarian-born, Austrian Jewish writer; founder and leader of the organized Zionist movement. ALS. (“Th. Herzl”). 1p. 8vo. Bad Ischl, August 1, 1897. On letterhead of the Neue Freie Presse. To an unidentified doctor, but likely a member of the editorial board of Herzl’s recently founded Jewish newspaper, Die Welt. In German with translation.

“It is a calamity that I cannot get away from Ischl and that I have no news. If it is not better by tomorrow, then you will have to conduct an editorial meeting with Schalit & Rosenberger and proceed according to your best judgement under my precise guidelines, which you should be familiar with by now – namely that Die Woche, with great moderation, [reports] everything of importance in the Congress.

The contents should be organized as follows:

(‘Spectator’ is a great acquisition)

Illustration of Sir John Simon with your appropriately adopted caption.

In haste with kindest Zion greetings…” 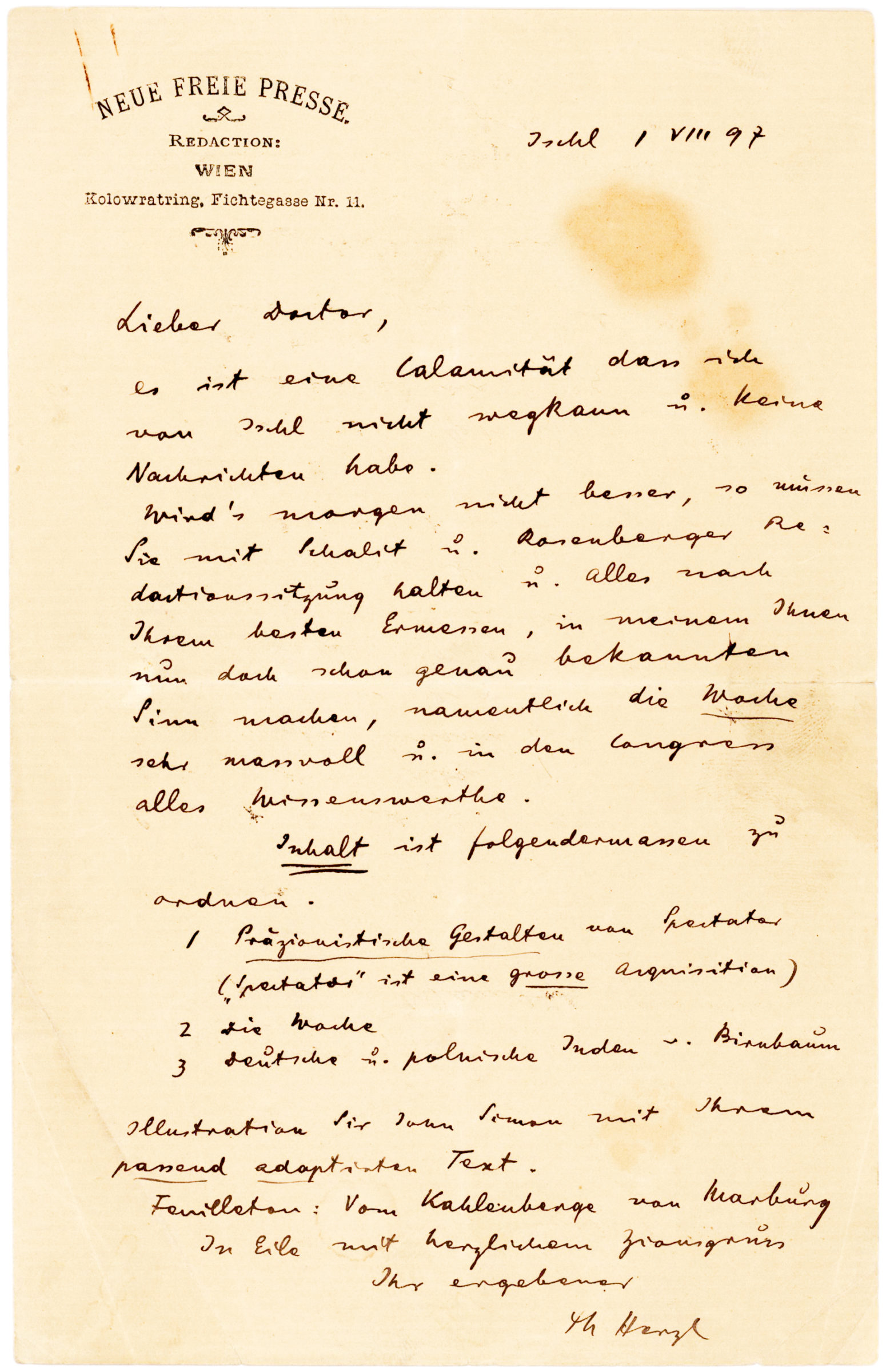 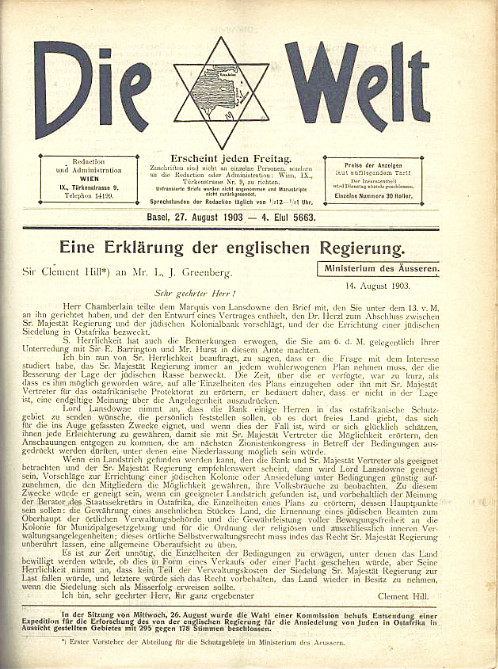 Herzl, whose journalistic career began as the Paris correspondent for Vienna’s Neue Freie Presse newspaper, observed French anti-Semitism close at hand, especially during the infamous Dreyfus Affair – the 1894 arrest, conviction and exile of an innocent French-Jewish army officer, whose trial Herzl covered for the newspaper. During this period Herzl wrote a drama about Jewish-Christian relations called The Ghetto and became convinced of the need to establish a Jewish homeland. His most influential work was The Jewish State, published in early 1896, which advanced a practical argument and outline for the realization of such a nation. The success and approbation awarded Herzl’s pamphlet vaulted him into the leadership of the Zionist movement.

In 1897, at his own expense and while serving as editor of the feuilleton or literary section of the Neue Freie Presse, Herzl founded the Zionist weekly Die Welt, which became the voice of Zionism with Herzl acting as the paper’s de facto editor and publisher. Our letter mentions Isidor Schalit (1871-1954), a Viennese dentist, prominent Zionist and contributor to Die Welt, and Erwin Rosenberger (?-?), editor of the Die Welt from 1897-1900, Herzl’s literary executor and author of the 1959 Herzl as I Remember Him in which he dubs Herzl, “Father of the modern Zionist movement.” Die Woche [The Week] and Feuilleton were sections within Die Welt. The first issue of Die Welt had just appeared, on June 4, 1897, and on June 24, Herzl left for his summer vacation to Bad Ischl, devoting his time there and back in Vienna tirelessly preparing for the upcoming first Zionist congress which convened in Basel three weeks from the date of our letter, August 29-31, 1897, and established the World Zionist Congress under Herzl’s direction.

Nathan Birnbaum (1864-1937) was the founder of Kadimah, the first Jewish student association in Vienna in 1883 as well as the originator of the term “Zionism.” As the Vienna delegate to the congress, he gave a speech on the opening day and was elected secretary general of the World Zionist Organization. Interestingly, he later denounced political Zionism. His numerous publications include the 1896 Die Jüdische Moderne.

Sir John Simon (1818-1897) was a Jewish solicitor and British Liberal politician who held a seat in Parliament for 20 years. It is likely that for his efforts on behalf of Russian Jews the recently deceased MP, who died in June 1897, was being recognized in Die Welt.

“Kahlenberge von Marburg,” refers to an article written by Emil Marburg about the church located in the 19th district of Vienna that was published on August 6 in Die Welt.

On the way to Basel, Herzl confided in his diary, barely three weeks after writing our letter, “The fact – and one I keep from everybody – is that all I have is an army of shnorrers. I am the leader of a bunch of boys, beggars and shmucks. Some exploit me. Others are already envious or disloyal… And yet this army would be quite adequate if only we had some success… We’ll see what the immediate future has in store.”

Folded with some creasing and slight soiling. Paperclip impression in the upper left corner, otherwise in fine condition. Only the second letter by Herzl mentioning the first Zionist Congress that we have ever seen for sale. 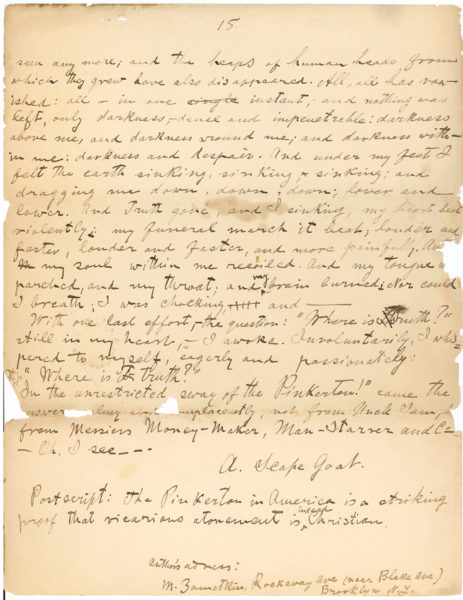 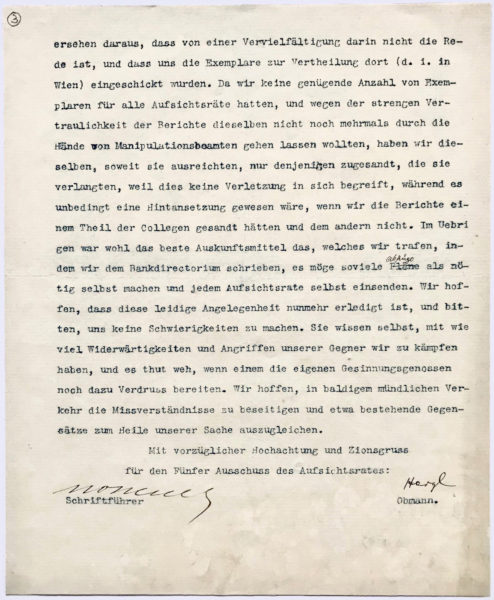