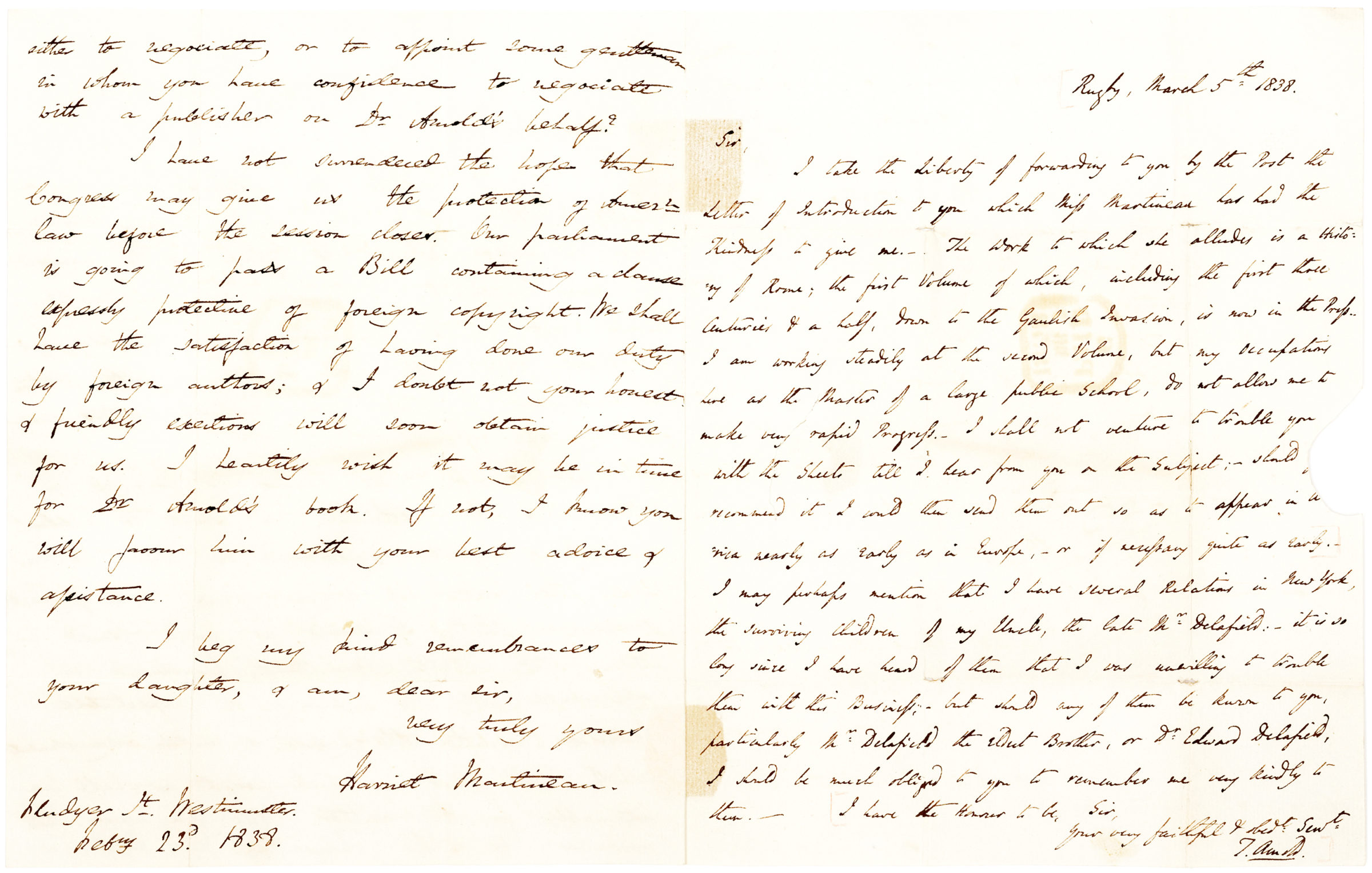 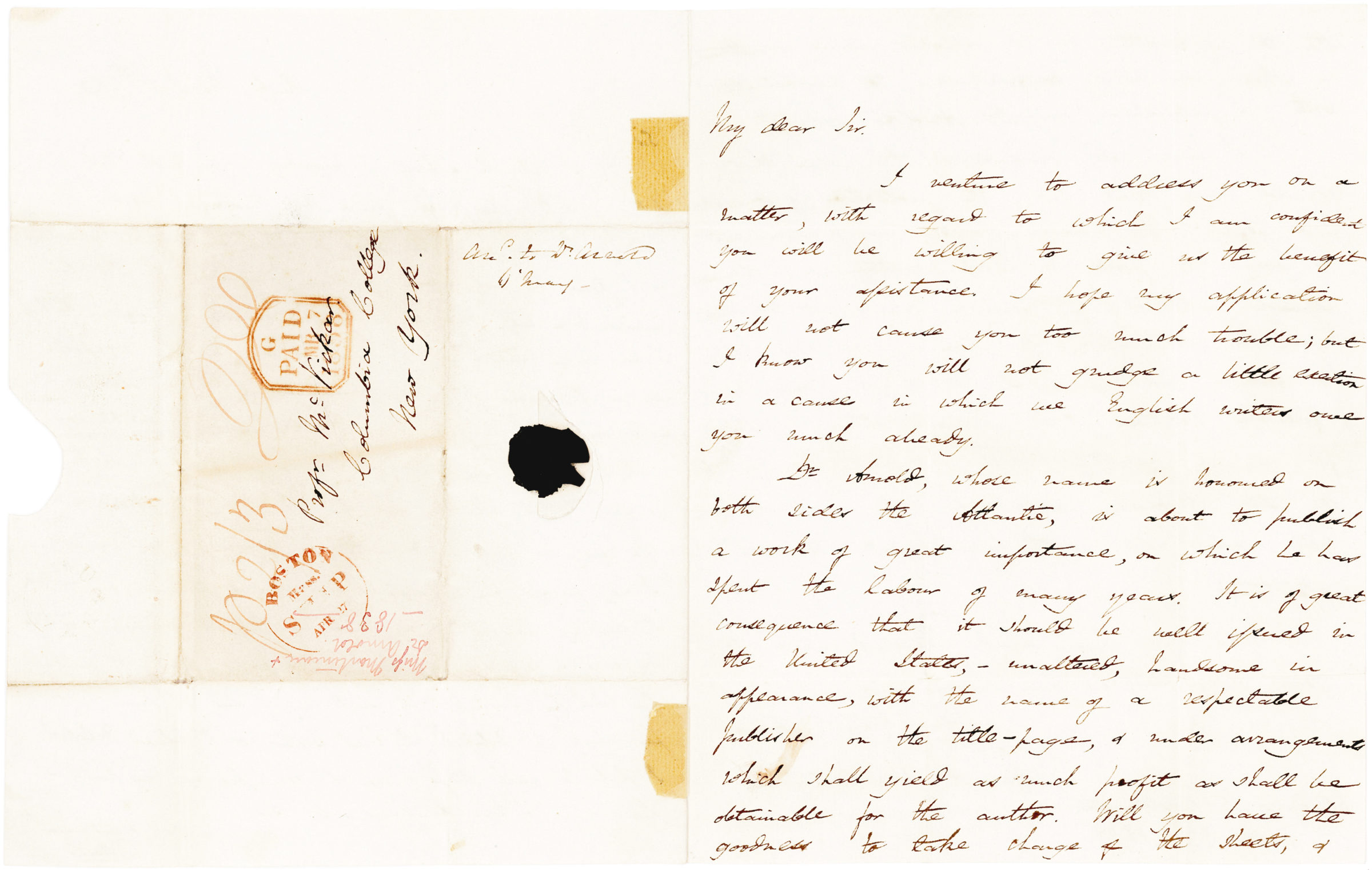 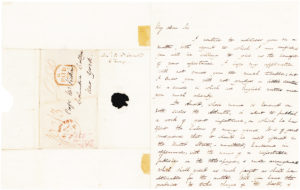 “I venture to address you on a matter, with regard to which I am confident you will be willing to give us the benefit of your assistance. I hope my application will not cause you too much trouble; but I know you will not grudge a little exertion in a cause in which we English writers owe you much already.

Dr. Arnold, whose name is honoured on both sides the Atlantic, is about to publish a work of great importance, on which he has spent the labour of many years. It is of great consequence that it should be well issued in the United States, – unaltered, handsome in appearance, with the name of a respectable publisher on the title-pages, & under arrangements which shall yield as much profit as shall be obtainable for the author. Will you have the goodness to take charge of the sheets, & either to negotiate, or to appoint some gentleman in whom you have confidence to negotiate with a publisher on Dr. Arnold’s behalf?

I have not surrendered the hope that Congress may give us the protection of Amer[ica]n law before the session closes. Our parliament is going to pass a Bill containing a clause expressly protective of foreign copyright. We shall have the satisfaction of having done our duty by foreign authors; & I doubt not your honest & friendly exertions will soon obtain justice for us. I heartily wish it may be in time for Dr. Arnold’s book. If not, I know you will favour him with your best advice & assistance.

I beg my kind remembrances to your daughter, & am, dear sir, very truly yours…”

The third page of the folded sheet bears a letter from Arnold which reads:

“I take the liberty of forwarding to you by the Post the letter of introduction to you which Miss Martineau has had the kindness to give me. – The work to which she alludes is a History of Rome; the first volume of which, including the first three centuries & a half, down to the Gaulish Invasion, is now in the Press. I am working steadily at the second volume, but my occupations here as the master of a large public school, do not allow me to make very rapid Progress. – I shall not venture to trouble you with the sheets till I hear from you on the subject;- Should [loss of a word because of a seal tear] recommend it I could then send them out so as to appear in [Ame]rica nearly as early as in Europe, – or if necessary quite as early. I may perhaps mention that I have several relations in New York, the surviving children of my Uncle, the late Mr. Delafield: – it is so long since I have heard of them that I was unwilling to trouble them with this business; – but should any of them be known to you, particularly Mr. Delafield the eldest brother, or Dr. Edward Delafield, I should be much obliged to you to remember me very kindly to them. I have the honor to be, Sir…”

After the failure of her family’s textile business, Martineau contributed to family finances by publishing articles in the Unitarian periodical the Monthly Repository, a political journal. Having established her reputation as a writer through such essays, Martineau was commissioned in 1832 to write a full-length book, Illustrations of Political Economy, which was informed by the economic theories of Thomas Robert Malthus and Adam Smith and was widely read. Her subsequent, influential series of articles, Poor Laws and Paupers Illustrated and Illustrations of Taxation, also earned her great international renown. She counted among her friends authors, philosophers, politicians, and scientists, including John Stuart Mill, Elizabeth Barrett Browning, Edward Bulwer-Lytton, Thomas Carlyle, and George Eliot. In 1834, she traveled to the United States and met with President James Madison as well as Boston abolitionists. Her subsequent sociological work Society in America, published in 1837, criticized the state of female education in the United States.

It was during her U.S. visit that Martineau became acquainted with McVickar who recorded the details of their meeting in Philadelphia. “I was agreeably impressed by her appearance and manner, her pleasing countenance, fine eye, and sweet voice. The intercourse was by the trumpet [Martineau having lost much of her hearing in her youth], which after all, is not so bad… Like all her country, she disdains to inquire; she means well, however, and I gave her a little of that commodity, I so often deal in,― plain advice, ― the results she is to report at the college next summer,” (The Life of the Reverend John McVickar, McVickar).

McVickar was a clergyman, educator, and himself a friend of numerous British poets who, at Columbia University, “was one of the first to propound the new synthesis of religion and economics,” (Issues of Justice: Social Sources and Religious Meanings, Copeland). In addition to an interest in the economic philosophies of Adam Smith that he shared with Martineau, McVicker was also an advocate of the passage of an international copyright law, and in his 1833 Tribute to the Memory of Sir Walter Scott called on lawmakers to “redeem a debt which in honor we have long owed,” (quoted in American Literature and the Culture of Reprinting, 1834-1853, McGill). Not only had British authors long been deprived of royalties on American reprints of their works, but very often the original text was significantly altered. It was in the spring of 1836 that British publisher Saunders & Otley, which had recently opened an office in New York, felt the urgent need for an international copyright agreement and “enlisted the help of Harriet Martineau, who circulated a petition to prominent British authors, gathered signatures, and submitted it to Congress… This petition set the tone for the American pro-copyright appeals that followed, characterizing the lack of international copyright as an affront to individual rights. While protesting that unauthorized reprints had inflicted ‘extensive injuries’ on British authors’ reputation and property, the petition deemphasized pecuniary loss, calling attention instead to the reprint trade’s lack of respect for the author as individual,” (ibid.). Martineau’s prediction made in our letter that “Congress may give us the protection of Amer[ica]n law before the session closes” proved to be overly optimistic; Congress did not act to protect foreign copyright holders until passage of the International Copyright Act of 1891.

Arnold’s letter concerns his principal literary work, History of Rome, which he penned between 1838 and 1842, in which he emphasized the relevance of Roman history for modern times. He is also the author Lectures on Modern History and numerous published sermons. However, Arnold made his mark with his outspoken support of the Anglican Broad Church Movement and the educational reforms he enacted as headmaster of the Rugby School, a post he held from 1828-1841, and referred to in our letter. The educational system he developed there was widely imitated and made the Rugby School a model for other English public schools. It is for these reforms that he is best remembered. Arnold would later become a professor of history at Oxford. He was the father of poet and critic Matthew Arnold. Arnold mentions in our letter his cousin, prominent American ophthalmologist, obstetrician and gynecologist Edward Delafield (794-1875), who co-founded the New York Eye Infirmary and who was president of the College of Physicians of Surgeons from 1858-1875. Written on three sides of a folded sheet with the address leaf intact. Slight paper loss from a black wax seal, affecting a few words of Arnold’s text. Folded with mounting traces at the center fold; otherwise in fine condition.

“If a test of civilization be sought, none can be so sure as the condition of that half of society over which the other half has power.” 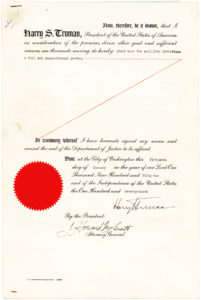 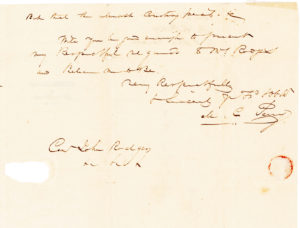 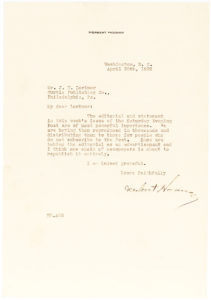