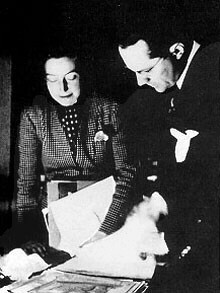 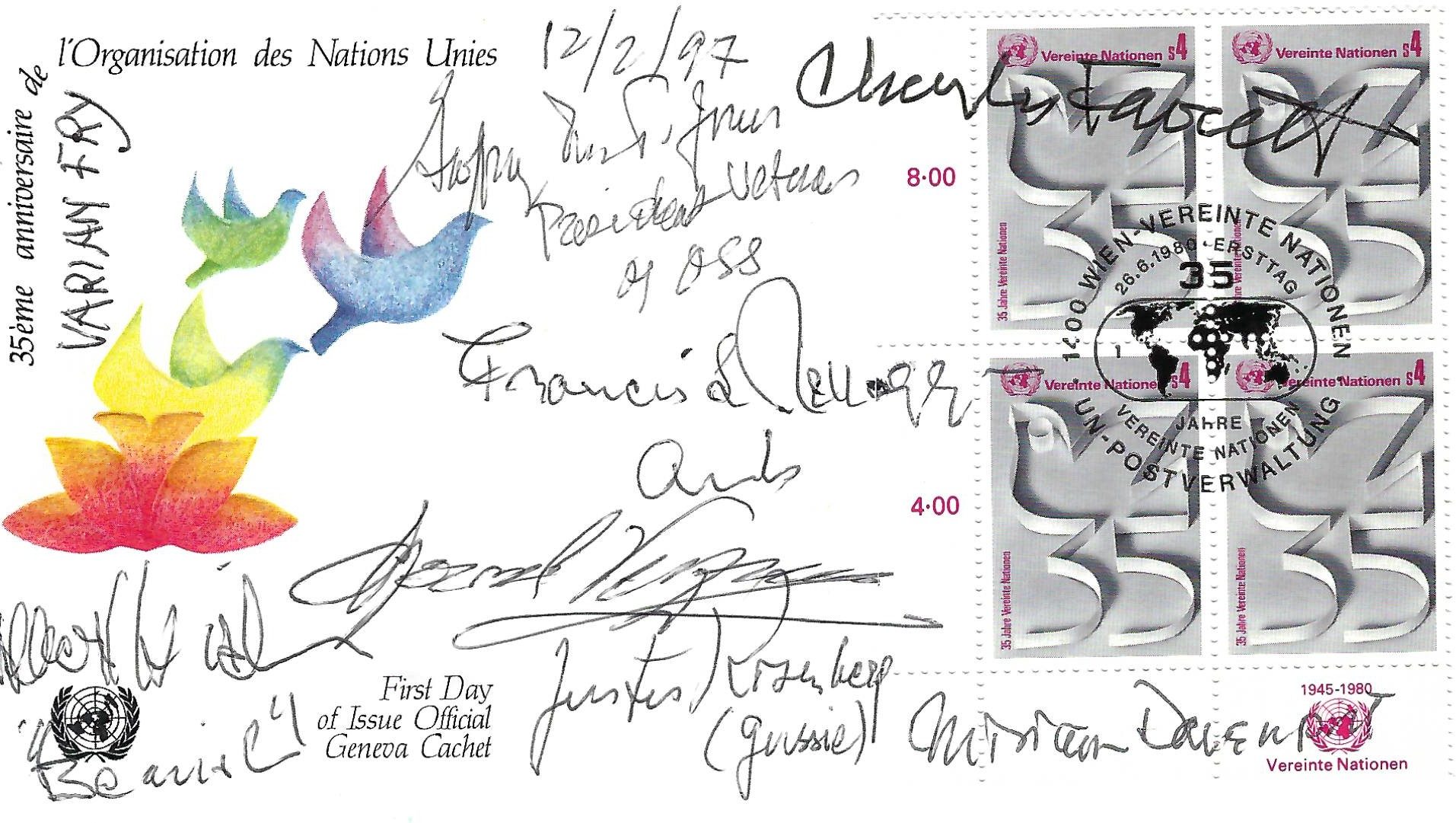 After reporting on the Nazi persecution of Jews in the mid-1930s and learning of the German invasion of France in June 1940, American journalist Varian Fry (1907-1967) and a number of his friends formed the Emergency Rescue Committee (ERC), “a group of New York intellectuals eager to cast a lifeline to their European counterparts. The committee was formed during an emotional luncheon held in June 1940 in Manhattan at the Commodore Hotel at 42nd Street and Lexington Avenue. They needed money, visas and an on-the-ground contact in Europe. Mr. Fry arrived in Marseille with $3,000 strapped to his calf, a passport valid for six months, a list of about 200 names and the blessing of Eleanor Roosevelt. The plan was to stay one month,” (“The Professor Has a Daring Past,” The New York Times, Wilman). Fry established a base in Marseille, where he and his network of associates obtained visas for refugees who had been denied them by the Vichy authorities. If they were unable to obtain visas, they forged papers or smuggled the refugees across the border into Spain and on to Portugal or aboard ships bound for Martinique. Working with British intelligence, Fry’s group also helped find escape routes for British soldiers trapped behind enemy lines. In just 13 months, Fry and his companions helped an estimated 2,000 intellectuals and artists escape Nazi persecution, including Hannah Arendt, Jean Arp, Jacques Lipchitz, André Breton, Marc Chagall, Marcel Duchamp, Max Ernst, Claude Lévi-Strauss, and Franz and Alma Werfel. The Vichy government and U.S. State Department forced Fry to abandon his activities and leave France in September 1941, but the ERC merged with the American arm of the International Relief Association to form the International Rescue Committee in 1942, which is still dedicated to providing relief to refugees around the world.

Our first day cover is signed by:

GEOFFREY MONTGOMERY JONES (“Geoffrey Mont. Jones / President Veterans / of OSS,” 1919-2007). After graduating from Princeton, Jones joined the 82nd Airborne Division, and transferred to the Office of Strategic Services (OSS) in 1944. “In July of that year, dressed as a French laborer, he parachuted behind German lines in the Basse Alps, replacing an operative who had been picked up by the Gestapo. In this capacity he made contact with French resistance groups, helped coordinate their activities, and reported by radio about German movements in the area. Subsequently, he and fellow resisters drove through German lines and joined up with the invading Americans,” (“Geoffrey Montgomery Talbot Jones ’42,” Princeton Alumni Weekly). After the war, he organized and served as president of the Veterans of OSS for more than 20 years. “For his wartime service he was recognized with the Croix de Guerre three times, the U.S. Legion of Merit, and the Order of the British Empire. He also was named an officer of the French Légion d’honneur,” (ibid.).

CHARLES FAWCETT (“Charles Fawcett,”1915-2008). An American who began travelling the world working aboard steam ships, Fawcett had odd jobs while living in France as an artist model and wrestler. After his unsuccessful attempt to join the American intelligence community at the outbreak of World War II, he enlisted in the Section Volontaire des Americains ambulance corps. However, it was assisting Varian Fry’s ERC that Fawcett found his true calling. Among the numerous contributions he made to the humanitarian efforts was marrying six different Jewish refugees so that they could obtain American visas. Warned in advance that the Gestapo was on its way to arrest him, he fled France, flew for the RAF and served with the French Foreign Legion. After the war, he worked as an actor and filmmaker, becoming a close friend of Orson Welles who narrated his documentary film Courage Is Their Only Weapon. “Always vulnerable to a good cause and the battle for human rights, a swashbuckling figure off-screen as well as on, Fawcett helped Hungarians escape their country after the Soviet invasion in 1956.  Especially close to his heart was the Afghan cause after the Soviet Union invaded the country in 1979,” (“Charles Fernley Fawcett,” Varian Fry Institute, www.varianfry.org/fawcett_en.htm). His role in Afghanistan was portrayed in the Tom Hanks film Charlie Wilson’s War.

MIRIAM DAVENPORT (“Miriam Davenport,” 1915-1995). An American artist studying in Europe, Davenport met Fry in Marseille while assisting her artist friends escape arrest. With wealthy Chicago socialite Mary Jayne Gold, she rented a villa and hosted refugee Surrealists, while covertly coordinating ways to help many artists and academics escape the Gestapo. Following her 1941 return to the U.S., she worked with the American Council of Learned Societies Committee for the Protection of Cultural Treasures in War Areas to identify important cultural sites in danger of destruction. She continued to be involved with the IRC and, after the war, oversaw Albert Einstein’s Princeton office of Emergency Committee of Atomic Scientists.

JUSTUS ROSENBERG (“Justus Rosenberg (Gussie),” b.1921). A Polish Jew, Rosenberg studied at a French boarding school during the war, where he learned to speak French fluently. Traveling to Paris for an exam, he arrived just days before the Nazis, joining the deluge of refugees desperately seeking French ports for safe passage out of Europe. It was here that he met Davenport who recruited the 19 year old to act as a courier and scout and gave him the nickname “Gussie.” Fry was unable to obtain a visa for Rosenberg and without his protection “Gussie” was soon arrested and destined for transport to a concentration camp. Faking illness and with the help of a sympathetic priest, Rosenberg narrowly escaped, changed his identity and working with the French Resistance until 1944, when he joined the reconnaissance company of the American 636th Tank Destroyer Battalion in 1944. After the war, he completed his studies at the Sorbonne, obtained an American visa with the help of Army friends and taught at the New School in Manhattan and Bard College for 50 years. He remains the last surviving member of Fry’s team.

MARCEL VERZEANO (“Marcel Verzeano,” 1911-2006). A Romanian Jew educated in Italy and France, Fry sought out the multi-lingual Verzeano to treat sick refugees, but he soon participated in the ERC’s covert operations, assisting those hunted by the Nazis to escape to Portugal through a network of Spanish Civil War refugees living in France. Later in the war Verzeano served with the United States Army Medical Corps, attaining the rank of captain.

ALBERT HIRSCHMAN (“Albert Hirschman ‘Beamish,’” 1915-2012). Born in Berlin, Hirschman studied economics in Paris and London before fighting in the Spanish Civil War, after which he resumed his studies in Italy only to have them interrupted by the rise of Mussolini. Hirschman volunteered for the French Army, but fled to southern France after the Nazi occupation. Nicknamed “Beamish,” Hirschman aided Fry and traded “currency on the black market, obtained forged documents and passports, devised ways to transmit messages by concealing strips of paper in toothpaste tubes and arranged for ships to transport—often illegally—many of the refugees. He personally explored escape routes over the Pyrenees into Spain. Eventually, the police found Beamish’s trail, so Hirschman joined the refugee flow across the mountains,” (“Albert O. Hirschman 1915-2012,” Insitute for Advanced Studies, https://www.ias.edu/press-releases/albert-o-hirschman-1915%E2%80%932012). Hirschman immigrated to the U.S. in 1941 with the assistance of a Rockefeller Foundation fellowship, but enlisted in the U.S. Army and worked for the OSS in Africa and Italy and as an interpreter during the early post-war crimes trials. After the war, he helped implement the Marshal Plan for the reconstruction of Europe at the Federal Reserve Board. His lengthy career as an economist and social scientist was acknowledged when the Institute for Advanced Study named a professorship in his honor in 1998.

FRANCIS L. KELLOGG (“Francis L. Kellogg,” 1917-2006). Kellogg served in the OSS during WWII and later became a special assistant to Nixon’s secretaries of state, filling diplomatic roles as chairman of the executive committee of the United Nations High Commission for Refugees and head of the United States Delegation to the Intergovernmental Committee for European Migration in Geneva. He was also in New York’s chief of protocol for the United States Mission to the UN in 1976. Concurrent with those duties, according to his New York Times obituary, he was on special assignment with the CIA.

The name “Varian Fry,” written in an unknown hand, is penned vertically in the upper left corner. Very fine and unusual. 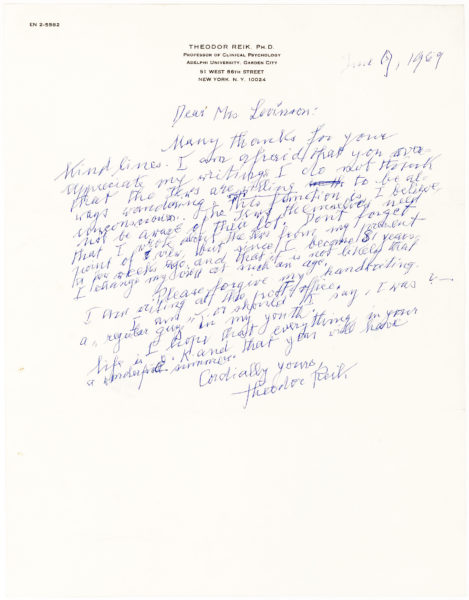 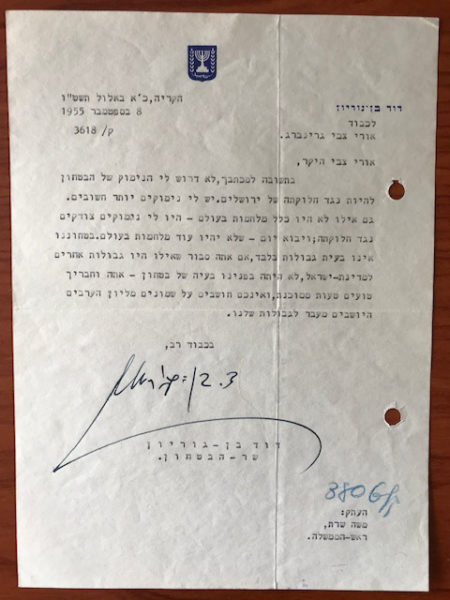