De Beauvoir’s’ autograph plot summary reads as follows: “Tunis, December 25, 1944. A group of leftist intellectuals are celebrating Christmas and the liberation. Having great hopes seem to be allowed to them; everything they loved pre-war will be reborn: private life, travel, love, happiness, literature; and they see new possibilities opening before them: they will help build on the ruins of fascism a fairer and better world. This optimism is embodied more particularly in two men: Robert Dubreuilh, famous 60-year-old writer, who took an active part in 36 in the anti-fascist struggle – Henri Perron, a well-known writer around 35 years old that the Resistance has just recently gotten to get involved politically. On the other hand, Dubreuilh’s wife, Anne, a psychoanalyst of around 40, is worried: the war has called the whole past into question; she fears that the future will challenge the work and the very thoughts of her husband […]. This novel strives to be a testament to the post-war era; but it also claims to be a novel […]. The French title of the novel will likely be The Mandarins.” 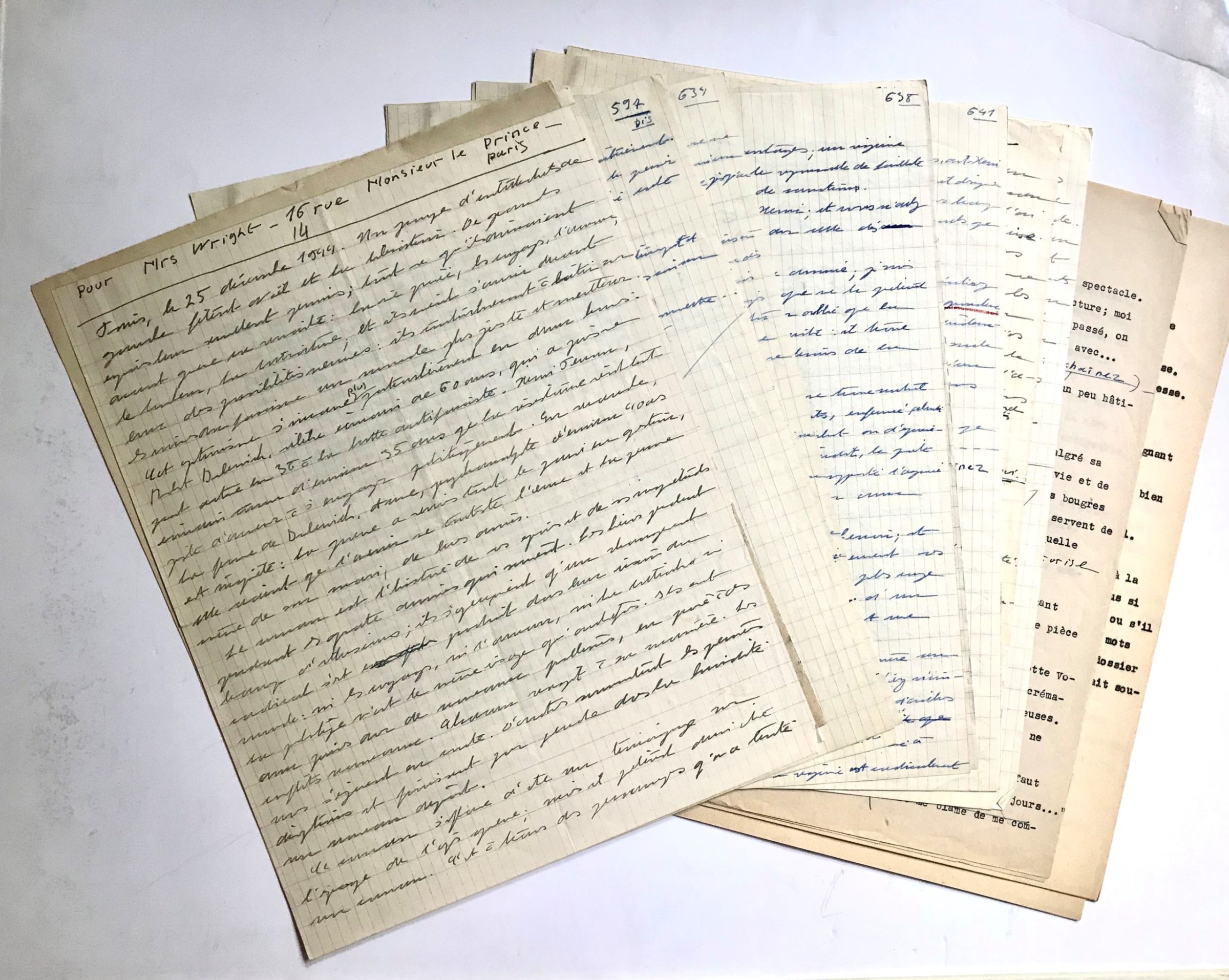 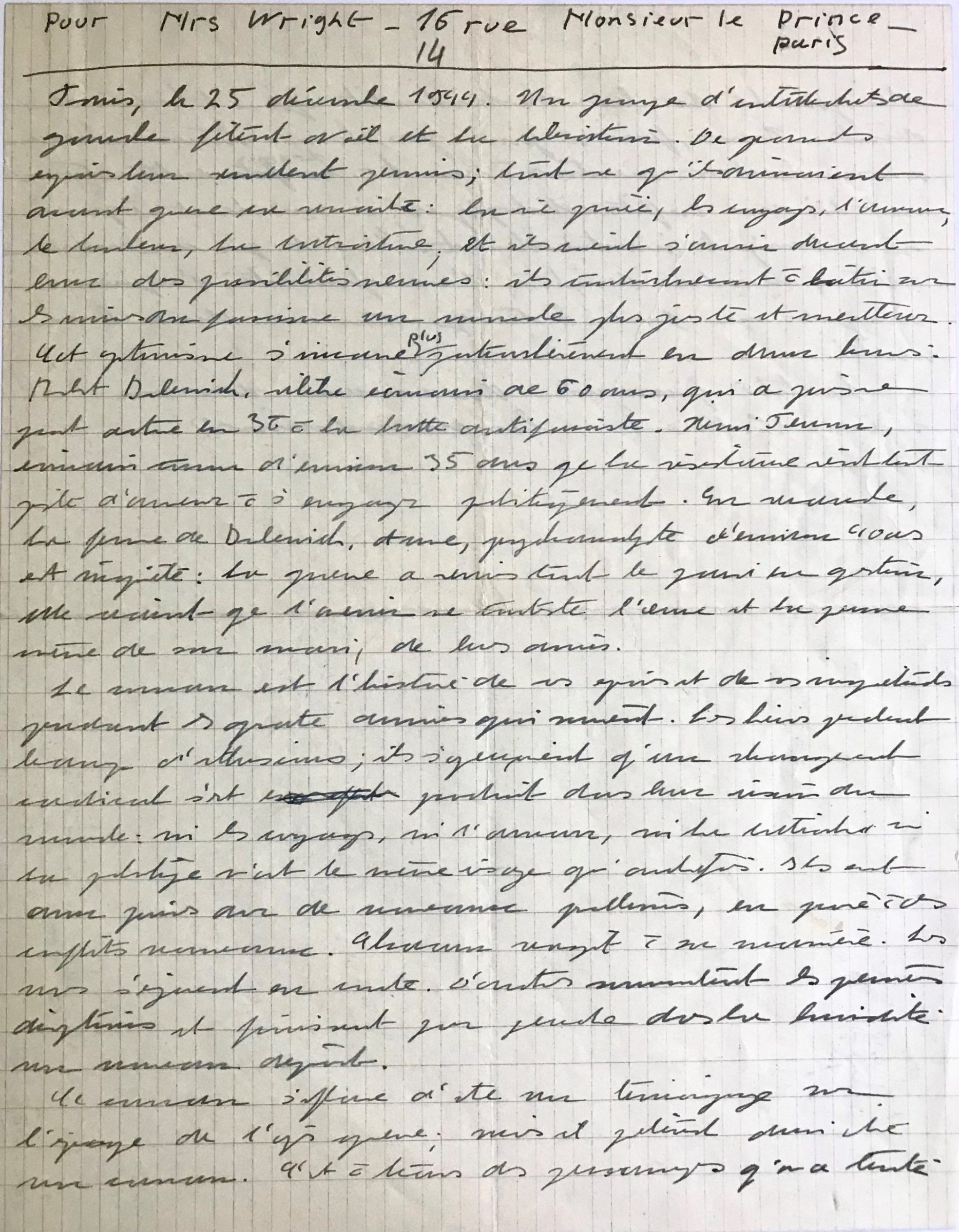 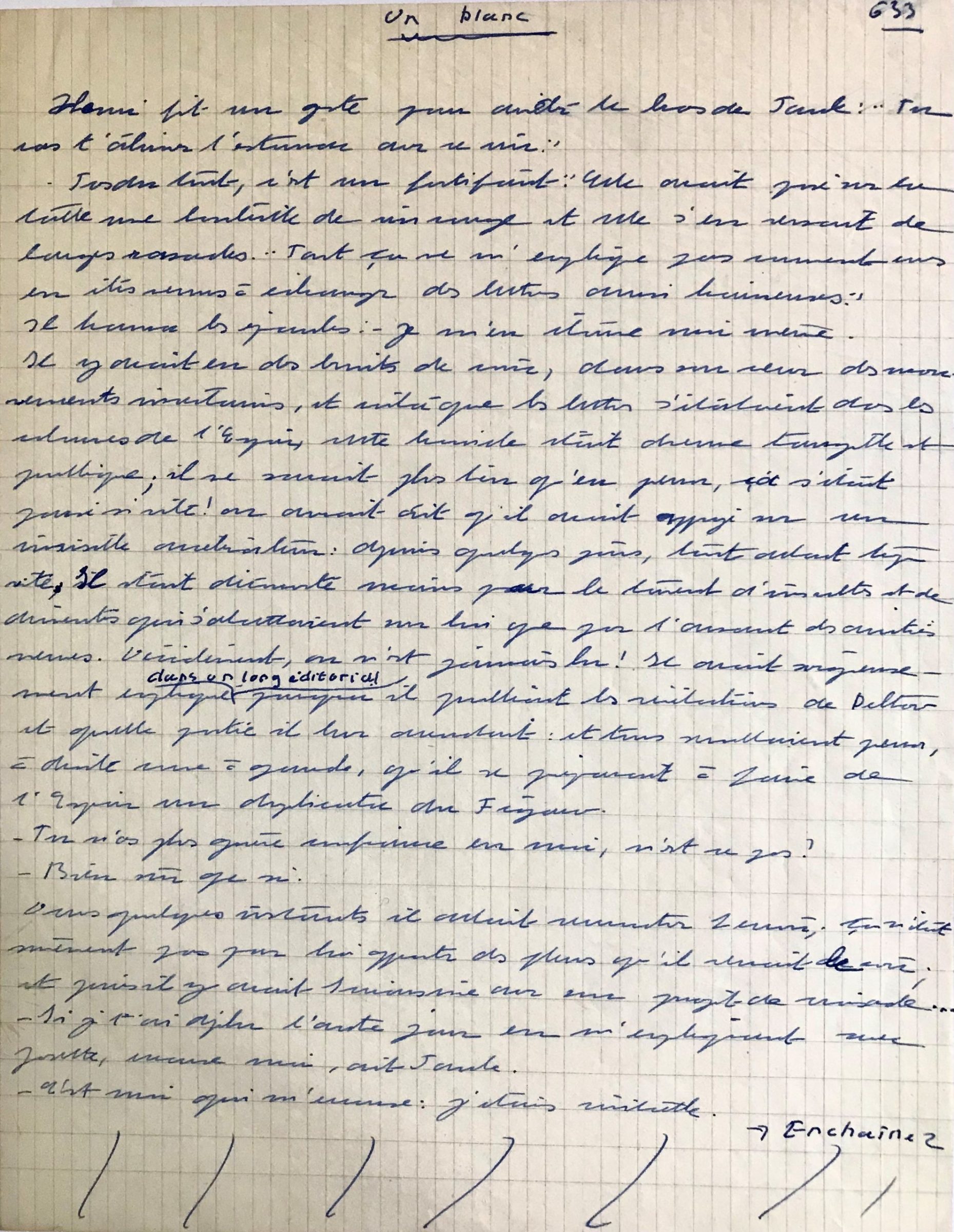 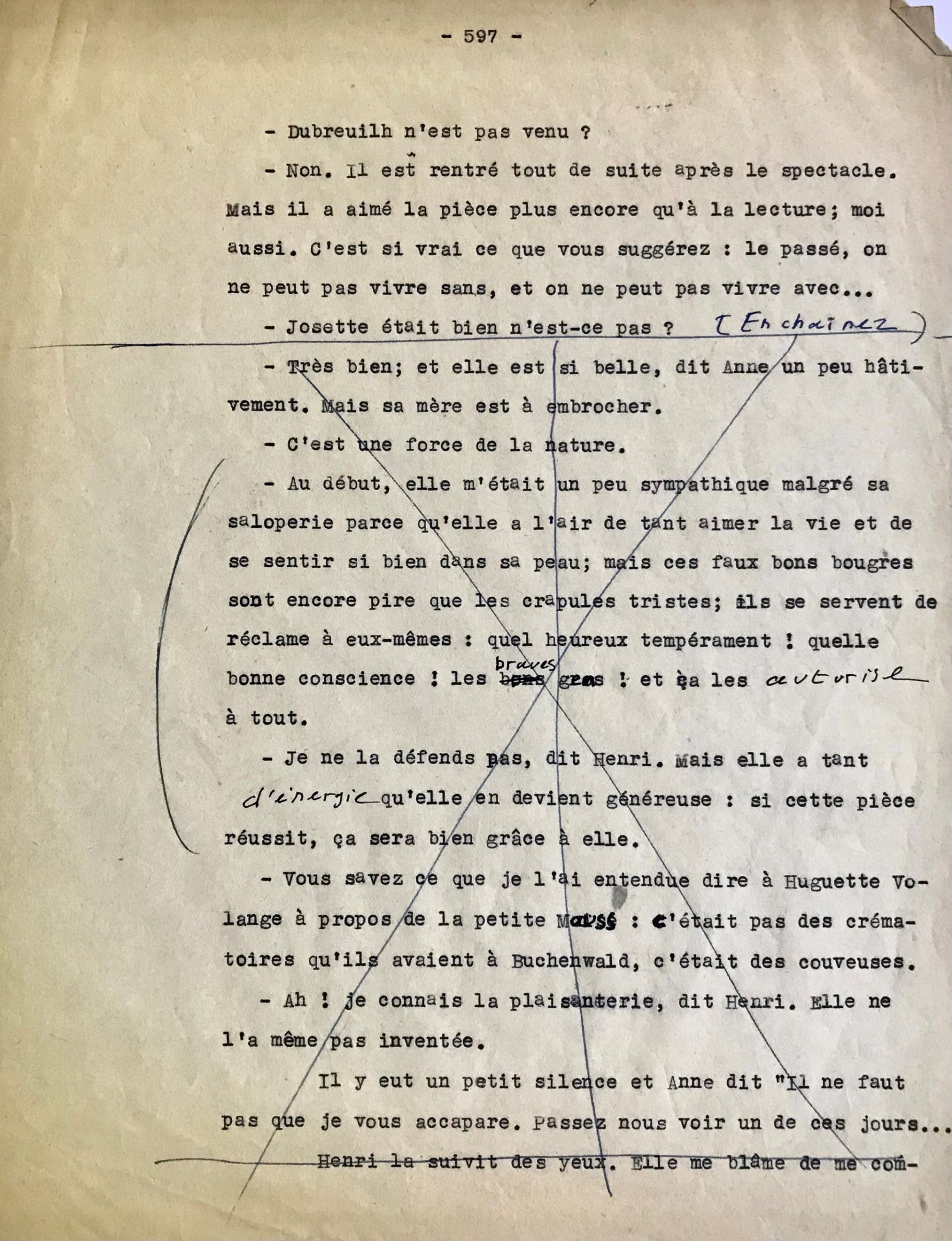 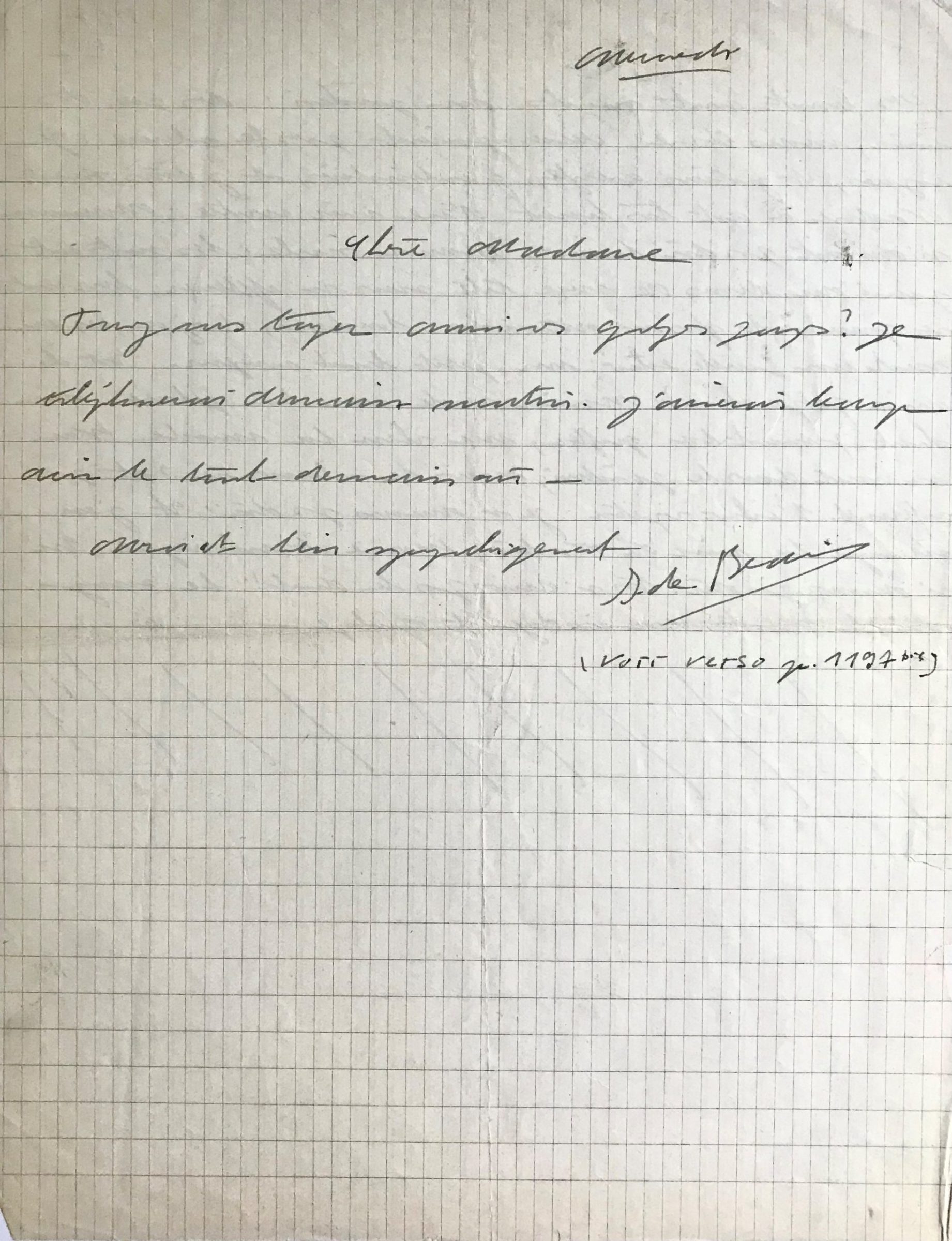 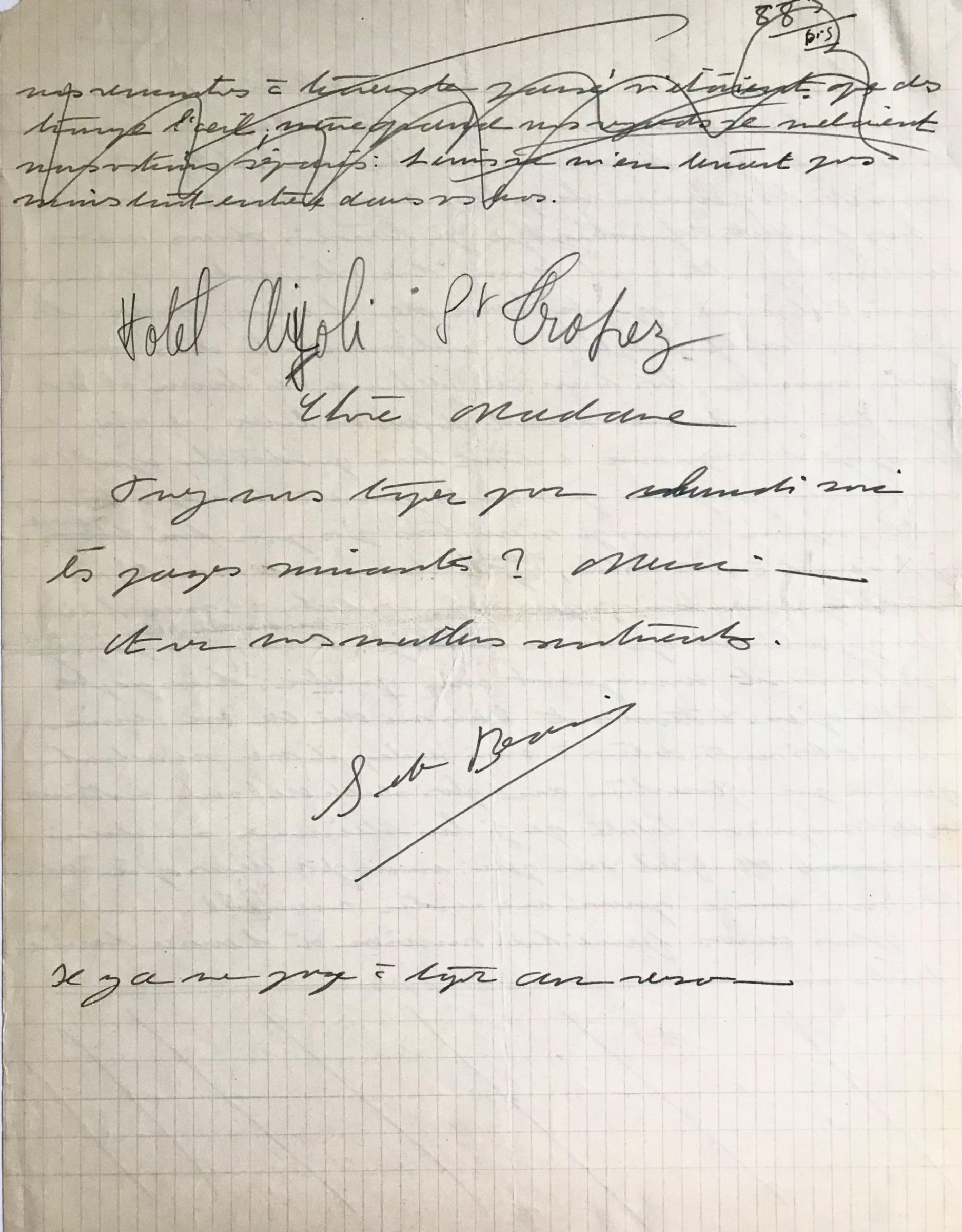 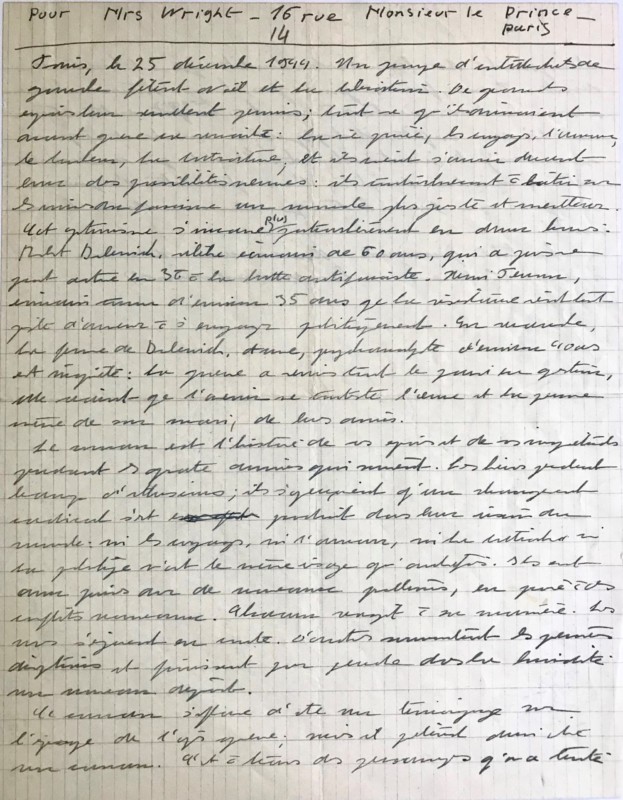 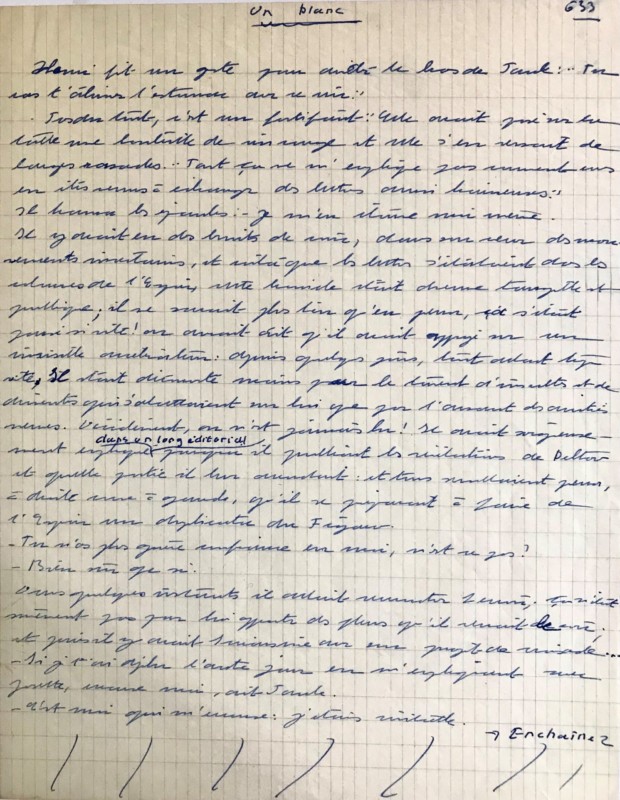 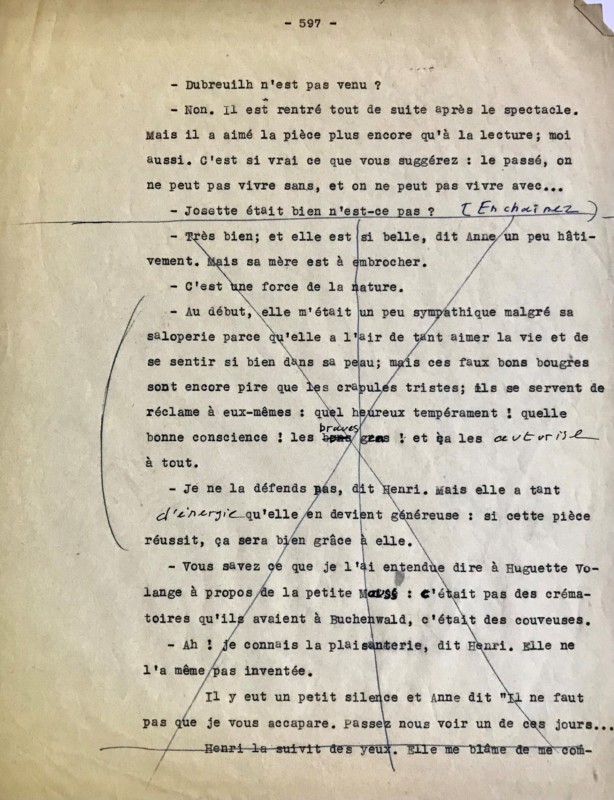 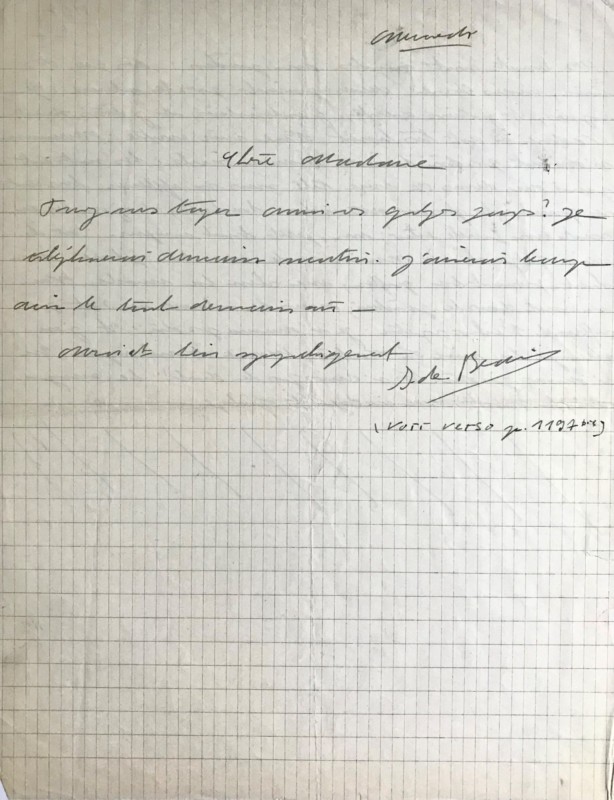 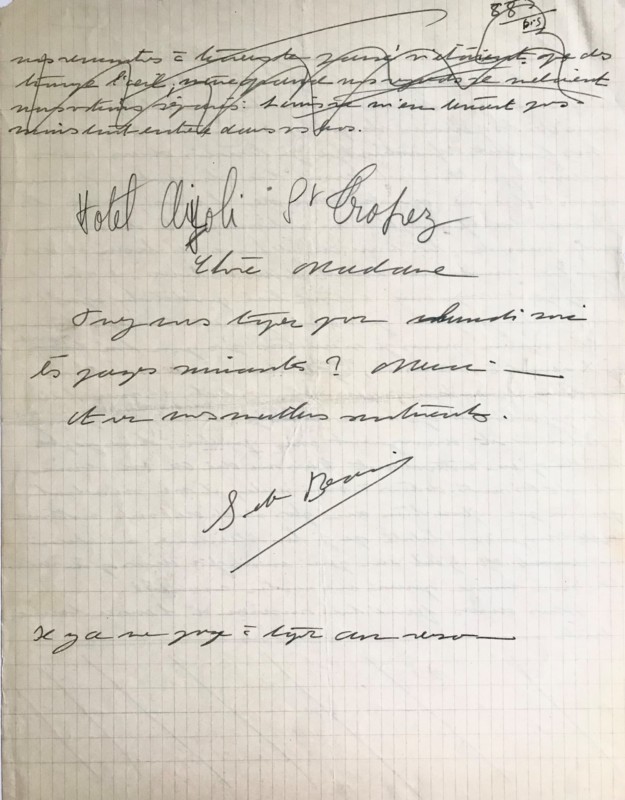 Manuscript numbered manuscript fragments, which also include the two ALSs to Ellen Wright are as follows:

These carbons consist of fragments of dialogues between Henri and Anne, Paule, or Samazelle. “More telegrams of congratulations! said Samazelle and throwing the dispatches on Henry’s desk. – You could say that we aroused public opinion, he added with a delighted air. He added: Scriassine is waiting in the parlor; he’s with Peltov and two other guys. – I read his anti-Soviet crusade project: I’m not interested, said Henri – We still must receive them, said Samazelle, and he pointed to the papers he had placed in front of Henri: and I would very much like you look at these remarkable articles that Volange just sent us… Now here we are classified as anti-communists. It will obviously make us lose half of our readers…” 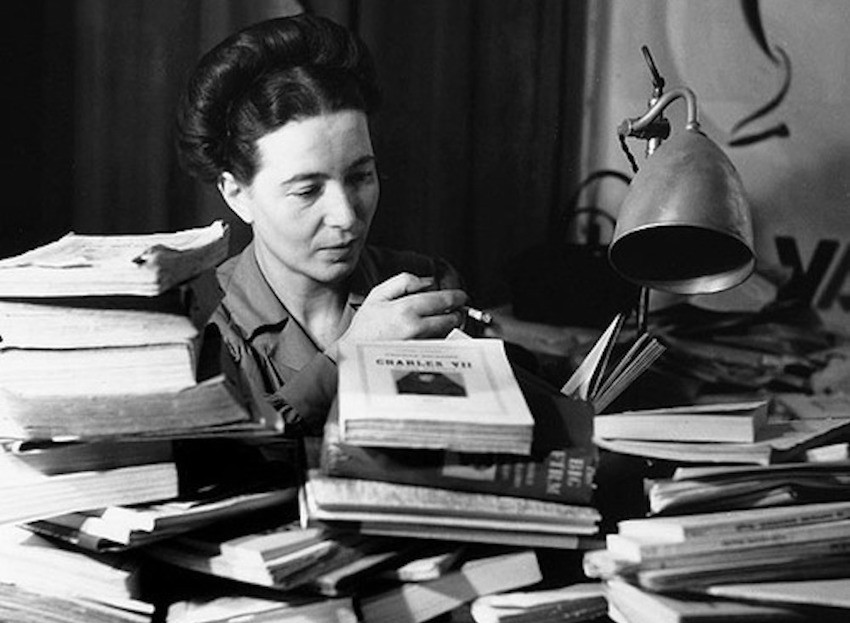 The author of novels, essays, biographies, and works on philosophy and social issues, de Beauvoir’s best-known work is The Second Sex, published in 1949, which explores women’s inferior position in a male-dominated society and how women grapple with this role. Her influence on feminist theory is profound. Numerous other works include Memoirs of a Dutiful Daughter, All Said and Done and the Roman a cléf The Mandarins, for which she was awarded the 1954 Prix Goncourt, France’s highest literary honor. The novel explores themes of existentialism, feminism, and morality through a circle of post-World War II intellectuals. Although de Beauvoir denied the connection, scholars believe the novel’s characters to be fictionalized versions of herself (Anne Dubreuilh); philosopher Albert Camus (Henri Perron); de Beauvoir’s lover, American author Nelson Algren (Lewis Brogan); and her longtime partner, French philosopher Jean-Paul Sartre (Robert Dubreuilh). During her lifetime, de Beauvoir’s academic and literary achievements were sometimes overshadowed by her numerous love affairs and accusations of inappropriate relationships with her female students.

Our manuscript was sent to Ellen Poplar Wright, a Jewish survivor of the holocaust and second wife of African-American writer Richard Wright, author of the acclaimed novel Native Son. De Beauvoir met the Wrights during her 1947 United States tour, and it was Wright who put her in touch with Algren. “A measure of the closeness between de Beauvoir and the Wrights is the fact that she dedicated her book about America [America Day by Day] to Ellen and Richard Wright. When the Wrights moved to Paris in 1947, their friendship with de Beauvoir and her partner Sartre deepened,” (The Richard Wright Encyclopedia, ed. Ward and Butler). Sartre and Beauvoir introduced Wright to French writers and publishers and the three of them collaborated on several political projects. “De Beauvoir became particularly close to Ellen Wright, especially after serious marital problems between the Wrights developed. She became Ellen’s confident for a number of years, and Ellen Wright became de Beauvoir’s literary agent in 1951,” (ibid.).

In overall fine condition and rare.