“I shall be disengaged at 2 o´clock to-day, and it will give me great pleasure to see Miss Ryle and yourself.

I trust the improvement in Lady Shuttleworth’s health continues – will you remember me to her kindly and believe me, dear Sir James. Yours respectfully & sincerely…

When I see you I shall be better able to say whether I can avail myself of your kind wish that I should spend another evening in Gloucester Square – the last was very pleasant and left a happy impression.”

The daughter of an Anglican clergyman, Charlotte and her sisters, Emily and Anne, fostered literary ambitions since childhood. Charlotte worked as a governess and a teacher at a boarding school, experiences which inspired her writing. Although her first novel, The Professor, was rejected for publication, she was encouraged to submit future manuscripts and, in October 1847, Smith, Elder & Co. published her gothic melodrama Jane Eyre under the pseudonym Currer Bell. Groundbreaking for its first person narrative from a female perspective and commentary on such topics as education, class, sexuality, and feminism, it was a popular success. The mysterious identity of the author created much speculation, which increased with the December 1847 publication of Wuthering Heights by Emily under the pseudonym Ellis Bell and Agnes Gray by Anne under the pseudonym Action Bell. Anne’s second novel, The Tenant of Wildfell Hall, was published six months later and, shortly thereafter, Charlotte and Anne traveled to London and revealed their identities to their publisher after much public pressure to do so. During subsequent visits to London, Charlotte began to move in literary circles, becoming acquainted with William Makepeace Thackeray, Harriet Martineau and Elizabeth Gaskell, the author of Cranford, North and South and Wives and Daughters, whom she met at the London home of Kay-Shuttleworth. 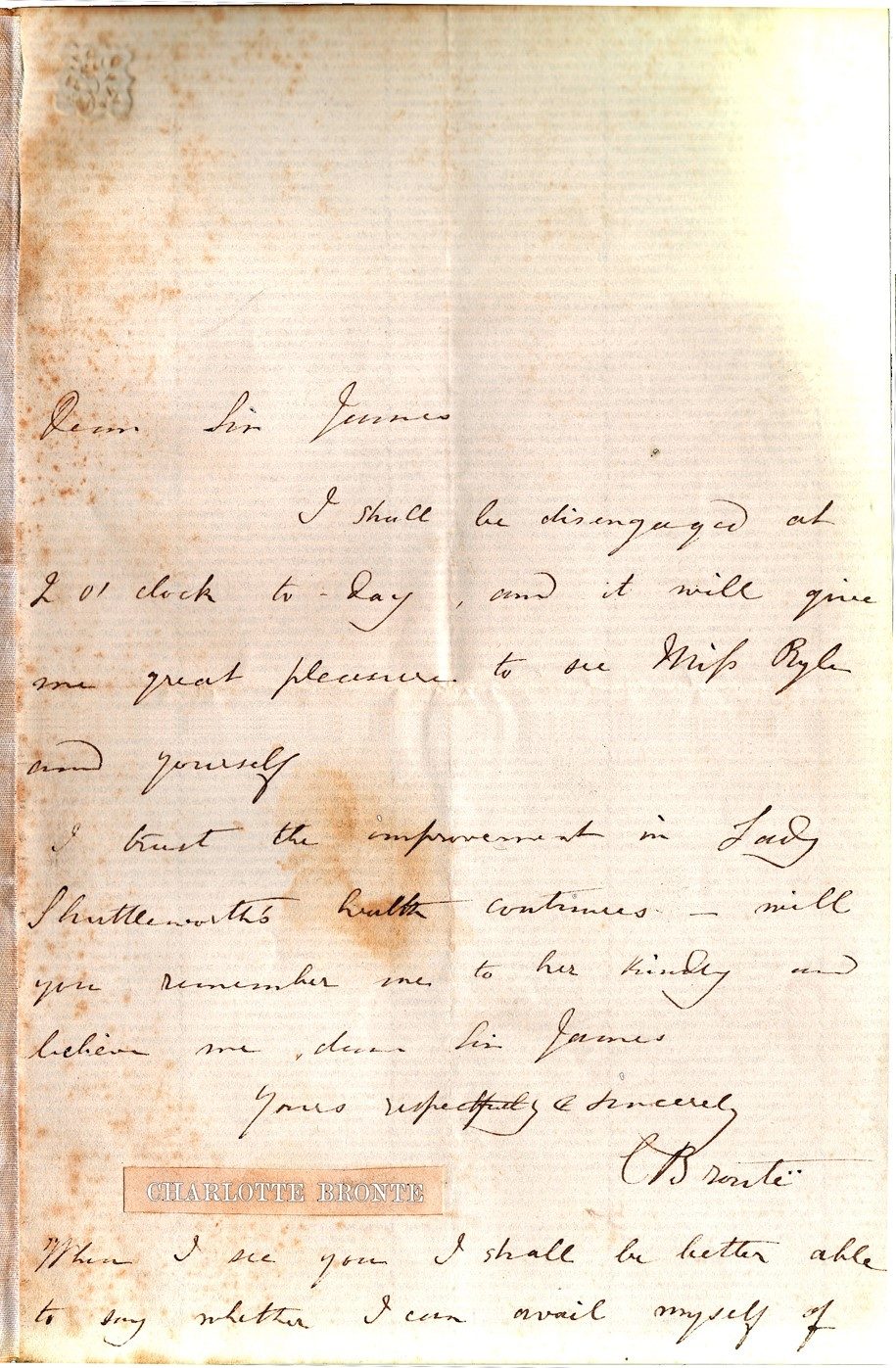 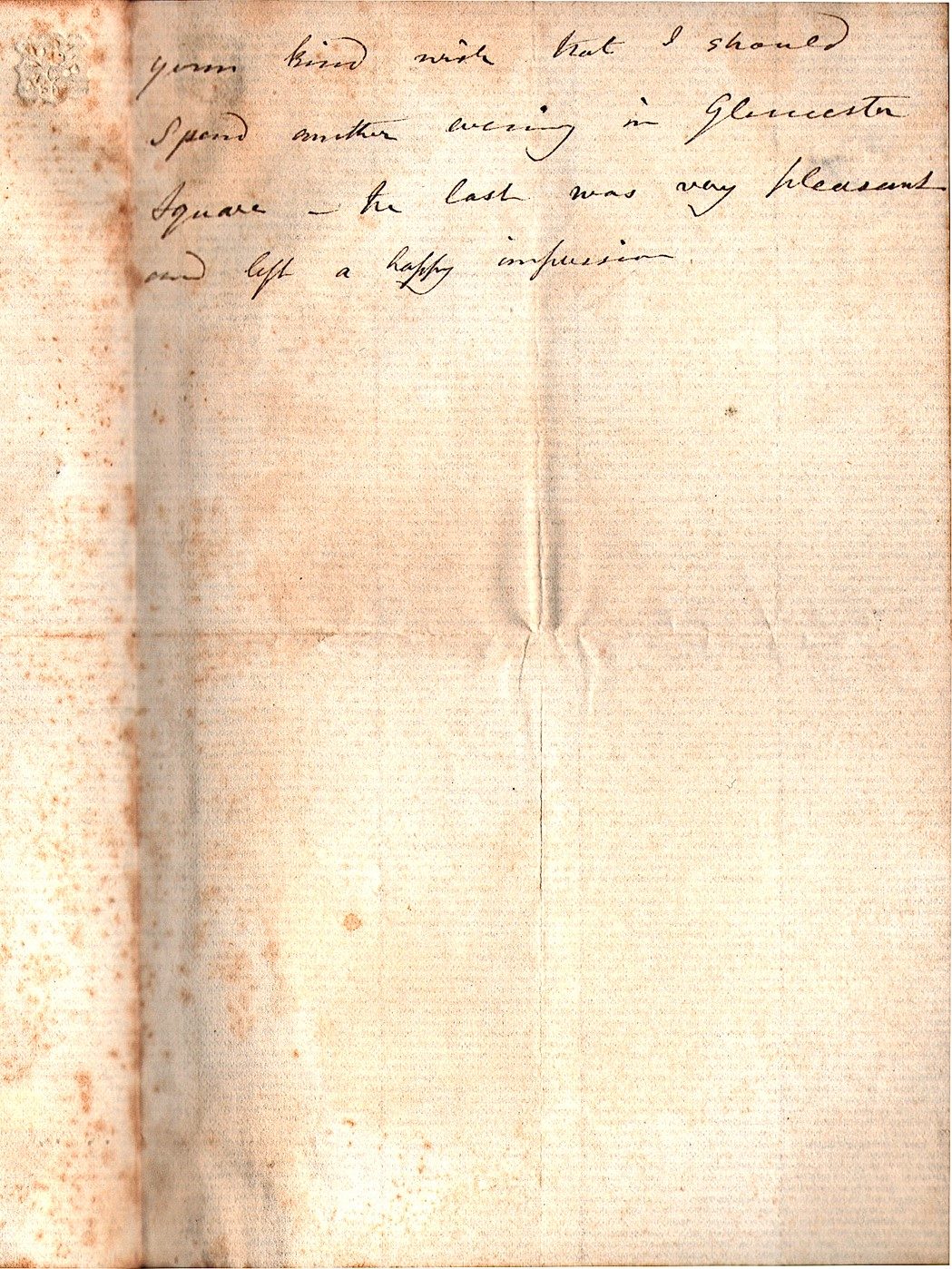 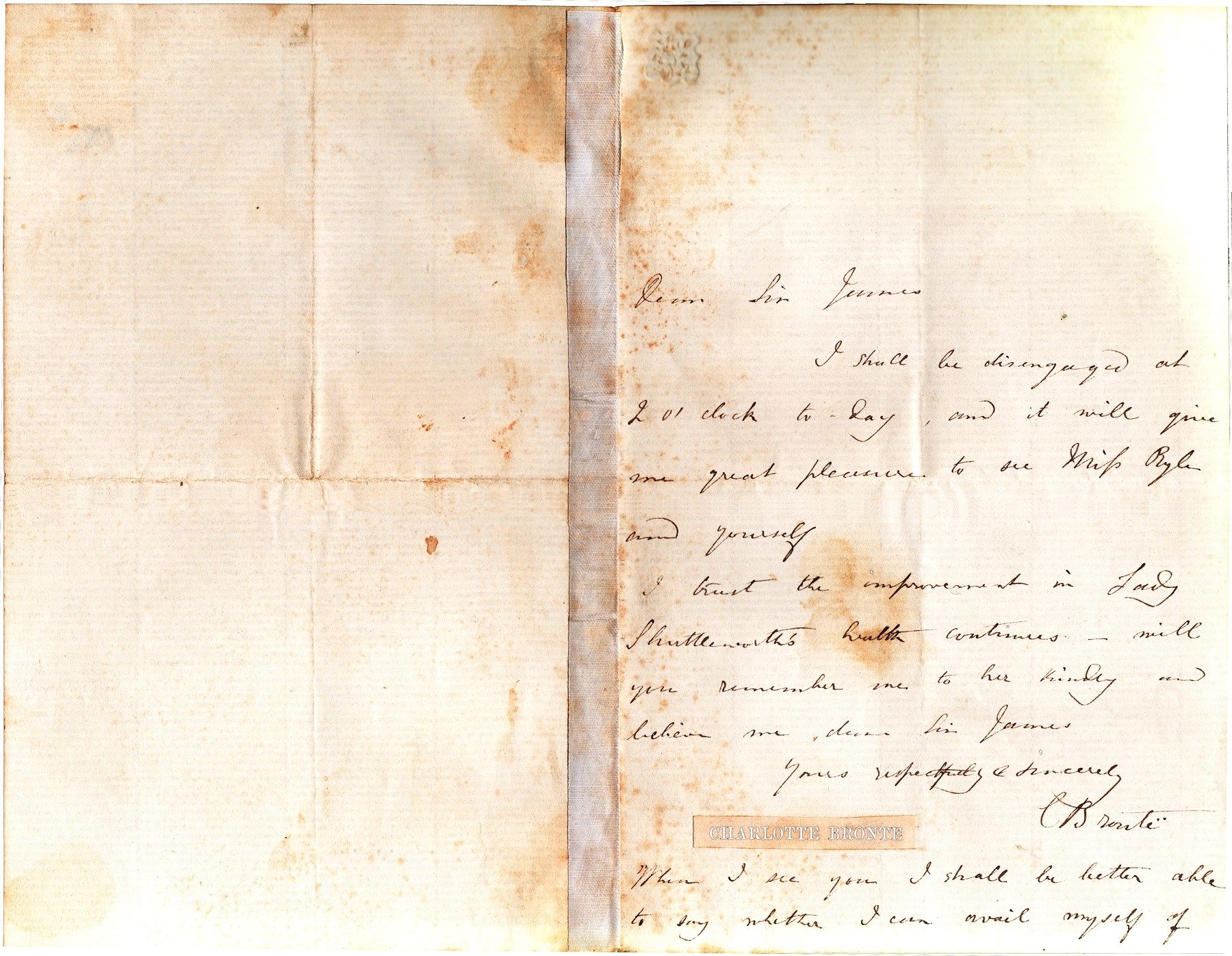 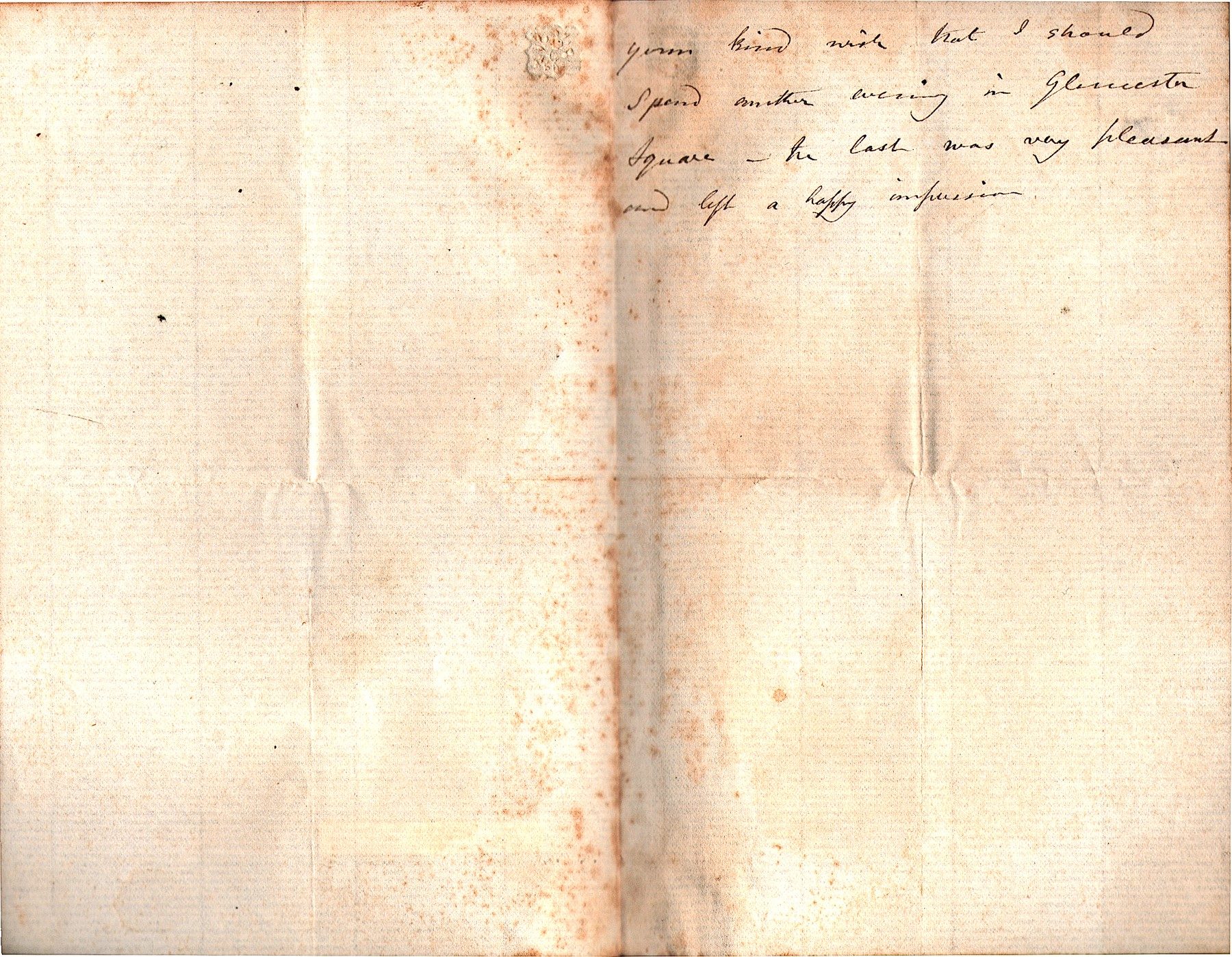 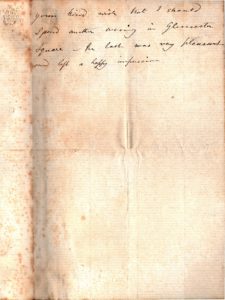 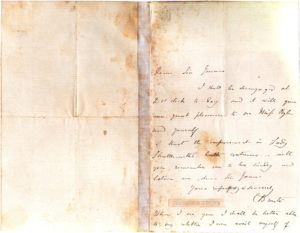 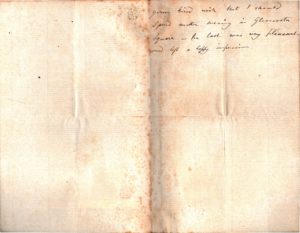 James Kay was a gifted physician who took up the cause of the working poor. His 1832 The Moral and Physical Condition of the Working Class Employed in the Cotton Manufacture in Manchester was cited by Friedrich Engels in his work The Conditions of the Working Class in England. In 1840, Kay founded the Battersea Normal College to train teachers, and it was through his work in the field of education that he met and married Janet Shuttleworth in 1842, heir to Gawthorpe Hall, in Burnley, Lancashire, located 10 miles across uninhabited moors from Brontë’s home, Haworth Parsonage in West Yorkshire. Granted a royal license, Kay was allowed to assume his bride’s name and coat of arms.

Following a series of personal losses, including the death of her sister Anne in 1848, Charlotte became increasingly withdrawn in her home at Haworth, just as her own celebrity was growing. “To know that Currer Bell [Charlotte Brontë] added indifferent health to her other sensational attractions as the season’s most enigmatic novelist instantly doubled [Kay-Shuttleworth’s] interest in her… none of Currer Bell´s readers pursued her quite so persistently or so unremittingly as he,” (Charlotte Brontë, Gérin). Charlotte “declined two invitations from Sir James to visit Gawthorpe and he thereupon announced his intention of calling upon her… Sir James has been criticized for an over-purposeful and excessively insistent encroachment, but her reluctance was predictable in view of her intense shyness, especially towards one of whom she would have little or no knowledge in her segregated state. She formed a favorable impression of Sir James and his wife, of their comely appearance and lack of pretentiousness, but with the reservation that she wished he was as sincere as he was polished, and that he showed his white teeth with too frequent a smile. Her father persuaded her to accept the invitation to Gawthorpe and she was to record the enjoyment of her stay in the hall, which was very much to her taste, ‘near three centuries old, grey, stately and picturesque’; also the talks by the fireside – ‘mostly in the form of monologues by Sir James,’” (“Sir James Kay-Shuttleworth and the Brontë Interlude, Journal of Royal College of Physicians, Shafar). A letter she wrote to her friend Ellen Nussey in April 1850, further reveals her view of the relationship, dreading the “small parties” Kay-Shuttleworth planned in her honor, but also noting that “Sir James has been a physician and looks at me with a physician’s eye – he saw at once that I could not stand much fatigue nor bear the presence of many strangers – I believe he could partly understand how soon my stock of animal spirits was brought to a low ebb, but no one – not the most skillful physician – can get at more than the outside of these things – the heart knows its own bitterness – and the frame its own poverty – and the mind its own struggles,” (quoted in The Works of Elizabeth Gaskell, Shattock and Easson).

Despite Charlotte’s mixed feelings about Kay-Shuttleworth, she was a frequent guest at Gawthorpe Hall and the Shuttleworth’s London residence over the next several years, including a visit to them at Gloucester Square on Friday, June 20, 1851, the last visit mentioned in the postscript of our letter. “Sir James’s preoccupation with Charlotte was to continue after her marriage to the Rev. Arthur Bell Nicholls in 1854. Having formed a favorable impression, he offered him the living at the new church he had erected in Padiham. It was a most attractive offer in terms of house, church and stipend but had to be declined because of their obligation to stay on at Haworth Parsonage during the lifetime of Charlotte’s father. On their visit to Gawthorpe in January 1855 the offer was tendered once more and again acceptance was not deemed possible,” (op. cit., Shafar).

Published in The Letters of Charlotte Bronte, 1848-1851, edited by Margaret Smith, Oxford, 2000, Vol II, page 645. Smith dates the letter based on the reference to visiting the recipient in Gloucester Square and to Lady Kay-Shuttleworth’s health.

Written on a folded sheet of paper with manufacturer’s blind stamp of a thistle, rose and shamrock in the upper left corner. Folded and foxed. A printed identification slip is affixed to the lower left corner of the first page, to the left of the signature. Remnants of prior mounting along the left edge. 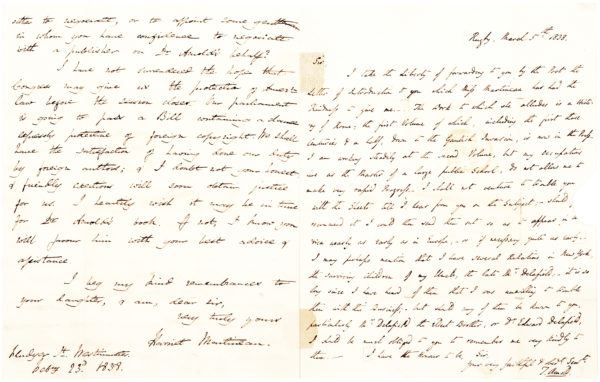 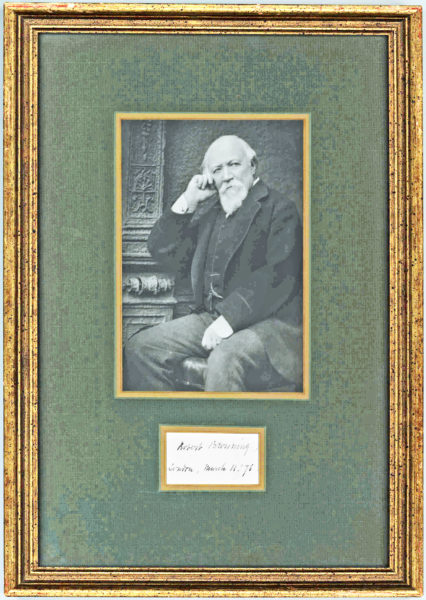