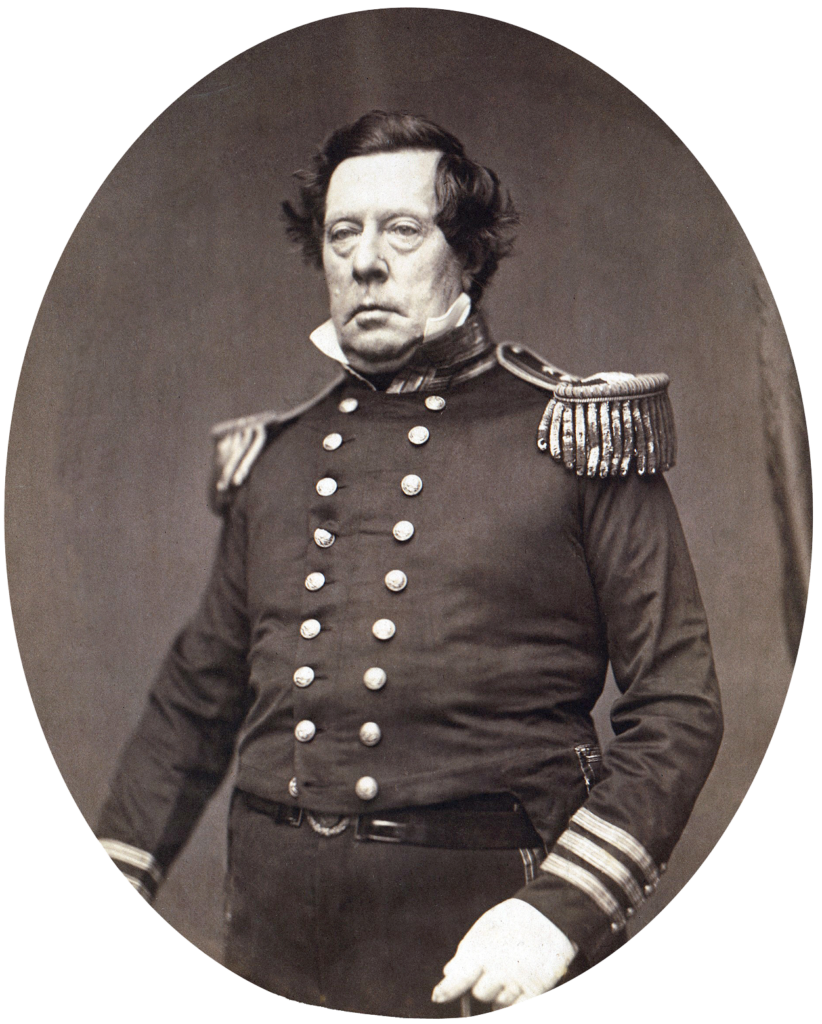 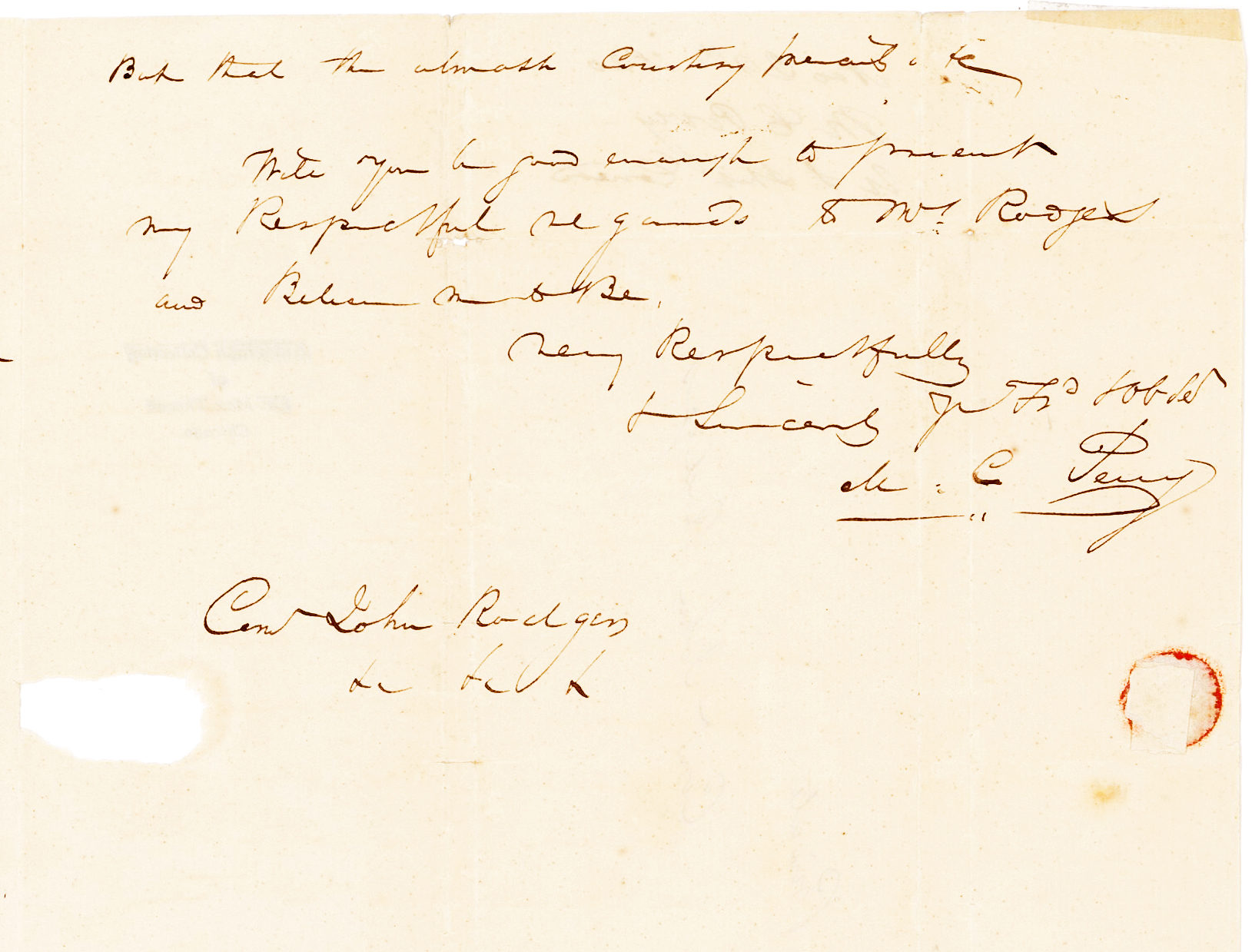 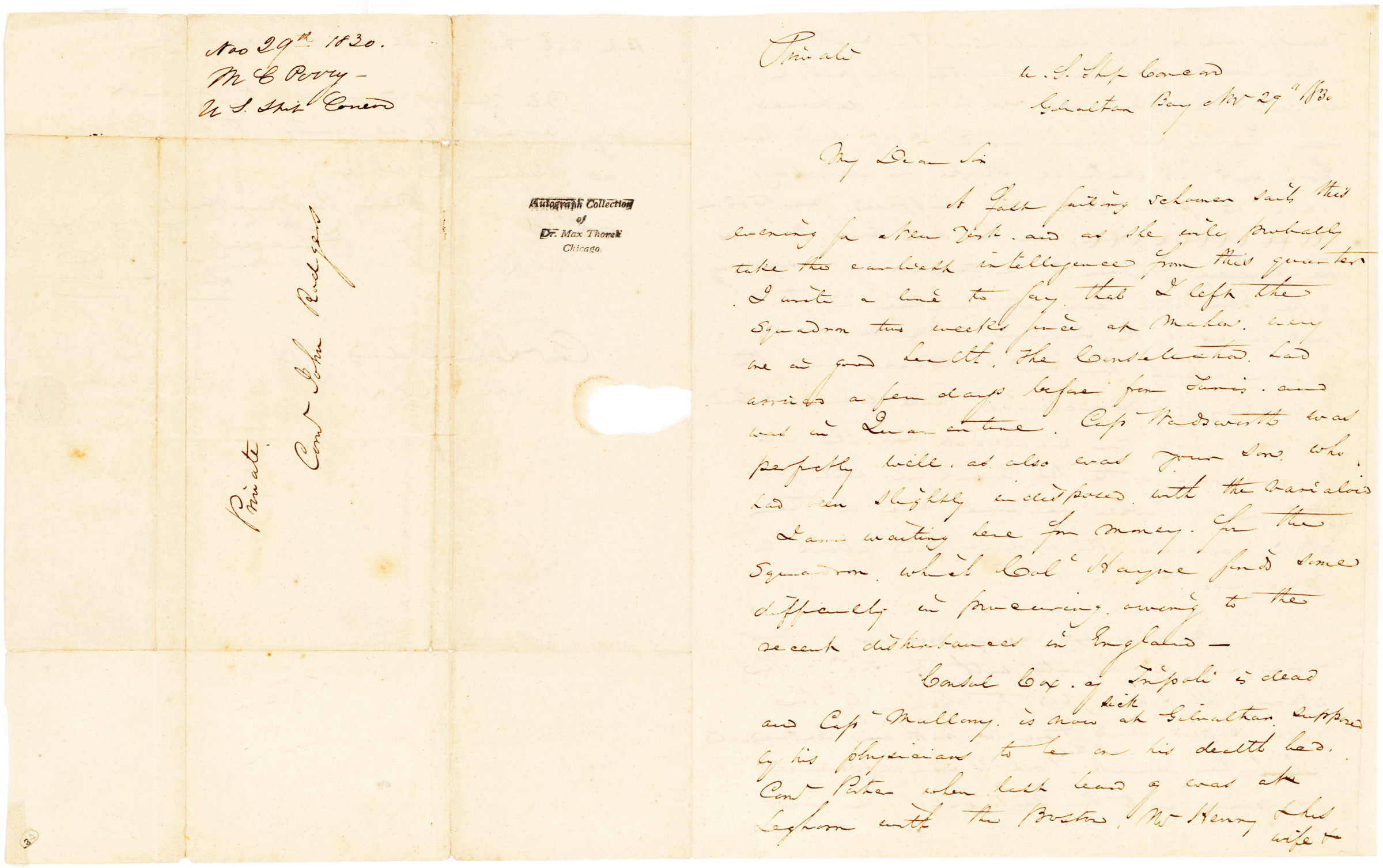 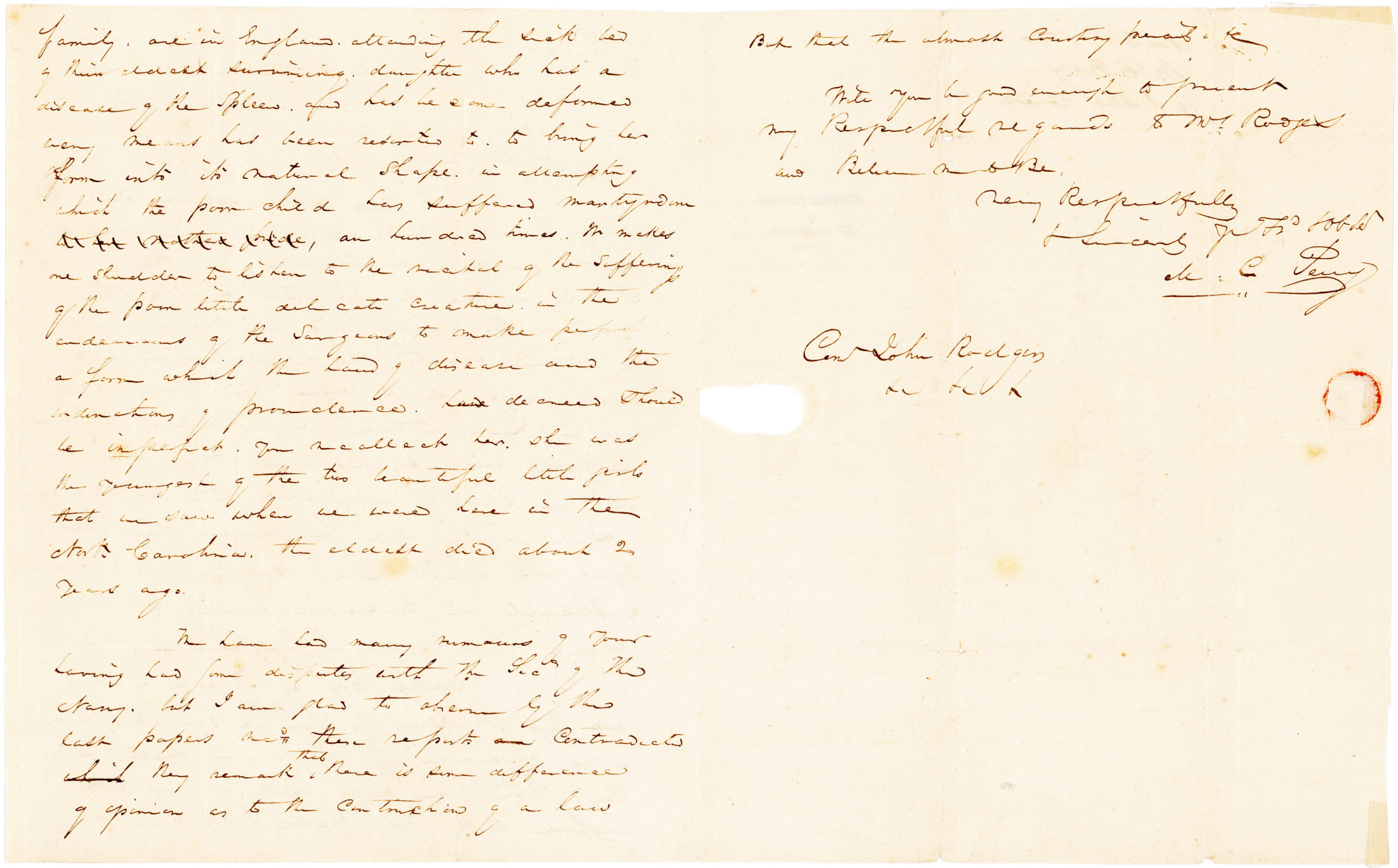 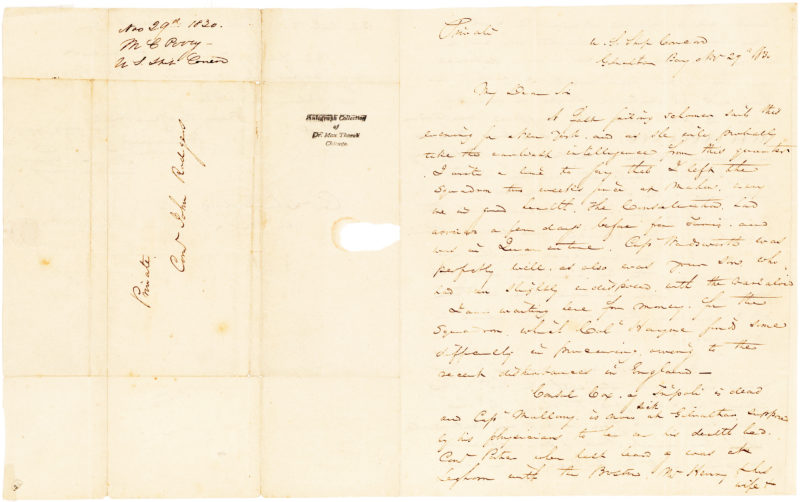 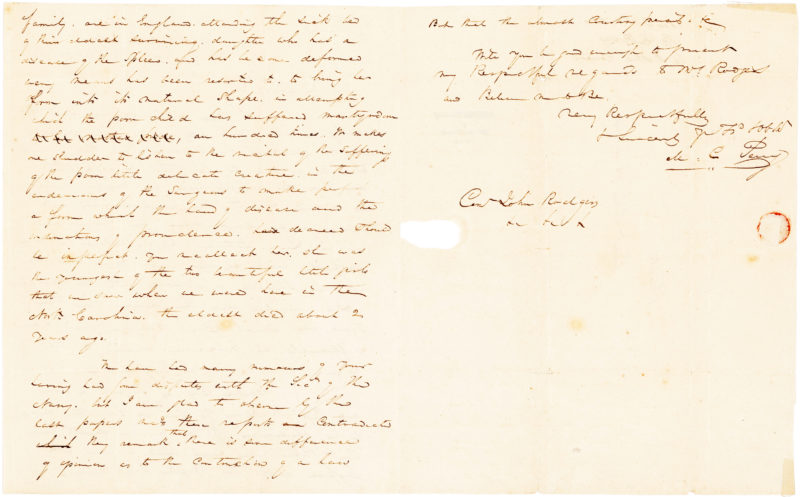 “A fast sailing schooner sails this evening for New York and as she will probably take the earliest intelligence from this quarter I write a line to say that I left the Squadron two weeks since at Mahon, every one in good health. The Constellation had arrived a few days before from Tunis, and was in Quarantine. Cap. Wadsworth was perfectly well as also was your son who has been slightly indisposed with the varialoid [smallpox].

I am waiting here for money for the Squadron which Col. Hayne finds some difficulty in procuring owing to the recent disturbances in England.

Consul Cox of Tripoli is dead and Cap. Mullany is now sick at Gibraltar, supposed by his physicians to be on his death bed. Com. Porter when last heard of was at Leghorn with the Boston. Mr. Henry & his wife & family are in England attending the sick bed of his eldest surviving daughter who has a disease of the spleen, and has become deformed. Every means has been resorted to, to bring her form into its natural shape, in attempting which the poor child has suffered martyrdom to her mother’s pride, an hundred times. It makes one shudder to listen to the recital of the suffering of the poor little delicate creature in the endeavors of the Surgeons to make perfect a form which the hand of disease and the ordinations of Providence have decreed should be imperfect. You recollect her. She was the youngest of the two beautiful little girls that we saw when we were here in the North Carolina. The eldest died about 2 years ago.

We have had many rumors of your having had some disputes with the Secy of the Navy, but I am glad to observe by the last papers recd. these reports contradicted. They remark that there is some difference of opinion as to the construction of a law but that the utmost Courtesy prevails, etc.

Will you be good enough to present my Respectful regards to Mrs. Rodgers and Believe me to Be, very Respectfully & Sincerely y[ou]r h[umble] & ob[edient] ser[vant]…”

Perry entered the U.S. Navy as a midshipman in 1809, becoming an aide to Commodore Rodgers aboard the USS President during the War of 1812. He went on to serve in the Mediterranean under Stephen Decatur aboard the USS United States during the Second Barbary War and helped suppress piracy and the illegal slave trade in the West Indies. Perry was Rodgers’ fleet captain from 1826-1827 and took command of the sloop-of-war USS Concord, in May 1830, aboard which he penned our letter. The Concord joined the American squadron patrolling the Mediterranean Sea until December 1832, and in the same year, Perry and the Concord brought American envoy John Randolph to the Imperial Russian court at St. Petersburg. Perry was an advocate for modernizing the Navy, which he did by reforming naval education, organizing the first corps of naval engineers and overseeing construction of the second steam frigate, the USS Fulton, earning the nickname “the Father of the Steam Navy.” He earned a commission of commodore in 1840, and commanded the USS Mississippi during the Mexican-American War. However, it was for his role in the opening of Japan that he is perhaps best remembered. In 1852, he became famous when he was “selected to undertake the most important diplomatic mission ever entrusted to an American naval officer, the negotiation of a treaty with Japan,” (DAB). The mission, comprised of two visits by Perry during 1852-1853 and in 1854, successfully opened Japan to American trade.

During the Tripolitan War, our letter’s recipient, John Rodgers, distinguished himself as commander of the blockade that led to the peace of 1805. Rodgers gained popularity for defeating the British aboard the USS President in 1811, and his performance in the War of 1812, won an appointment from President Madison to become head of the Board of Naval Commissioners, a post he held for many years.

The naval frigate USS Constellation, was launched in 1797 during the Quasi-War with France, and was one of the six original frigates whose construction had been authorized by the Naval Act of 1794. In 1799, she defeated the French Navy’s fastest ship, L’Insurgente, and  La Vengeance a year later. The Constellation continued in active service during the First Barbary War, the War of 1812 and the Second Barbary War. She was part of the Mediterranean squadron 1829-1831, under the command of Alexander Scammel Wadsworth (1790-1851), a distinguished veteran of the War of 1812 and Second Barbary War (and cousin of American poet Henry Wadsworth Longfellow), and disassembled in 1853 at the Gosport Navy Yard in Virginia. John Rodgers (1812-1882), the son of the recipient and a future Rear Admiral during the U.S. Civil War, received his commission as a navy midshipman at the age of 15 and begin his service on both the Constellation and the Concord. Arthur P. Hayne (1788-1867), whose military career began in 1807, fought in Lake Ontario and at the Battle of New Orleans during the War of 1812 where he was recognized for bravery three times. At the time of our letter, Hayne was the U.S. naval agent in the Mediterranean, after which he represented South Carolina in the Senate. Beginning in 1825, Charles D. Cox (?-1830) served as Consul to the Barbary States at Tripoli. David Porter (1780-1843), began his naval career under Rodgers. Taken prisoner at Tripoli in the First Barbary War, he assumed command of the USS Constitution after his release. Porter seized the first British warship taken during the conflict and captured hundreds of prisoners over the course of the next two years. After the war he served on the Board of Navy Commissioners and led a mission to suppress piracy in the West Indies, but during the latter campaign, he made an unauthorized raid on a Puerto Rican village that led to his court martial. Porter resigned his naval commission with the honorary rank of commodore and commanded the Mexican navy from 1826-1829. At the time of our letter Commodore Porter was serving as Minister to the Barbary States. The USS North Carolina was Rodgers’ flagship in the Mediterranean from 1825-1827.

Written on a folded sheet with the integral address leaf intact save paper loss from the wax seal. Folded with some fold tears not affecting any text. Marked “private” on the address panel. Bearing the black ink stamp of the “autograph collection of Dr. Max Thorek Chicago,” a famous Chicago autograph collector and surgical innovator. In very good condition. Content letters of Perry, particularly this early, are rare; this is the earliest example we could find since 1993.