DREYFUS, ALFRED. (1859-1935). French-Jewish artillery captain assigned to the Army’s General Staff unjustly accused and convicted of treason in 1894. ALS. (“A. Dreyfus”). 2/3 p. 8vo. N.p., Thursday. On stationery blind-embossed with address on 101 Boulevard Malesherbes, where Dreyfus and his family lived, starting in 1902. To an unidentified gentleman, perhaps an attorney.

“I will come to see you Saturday morning at half past nine unless you advise me otherwise, indicating another time. 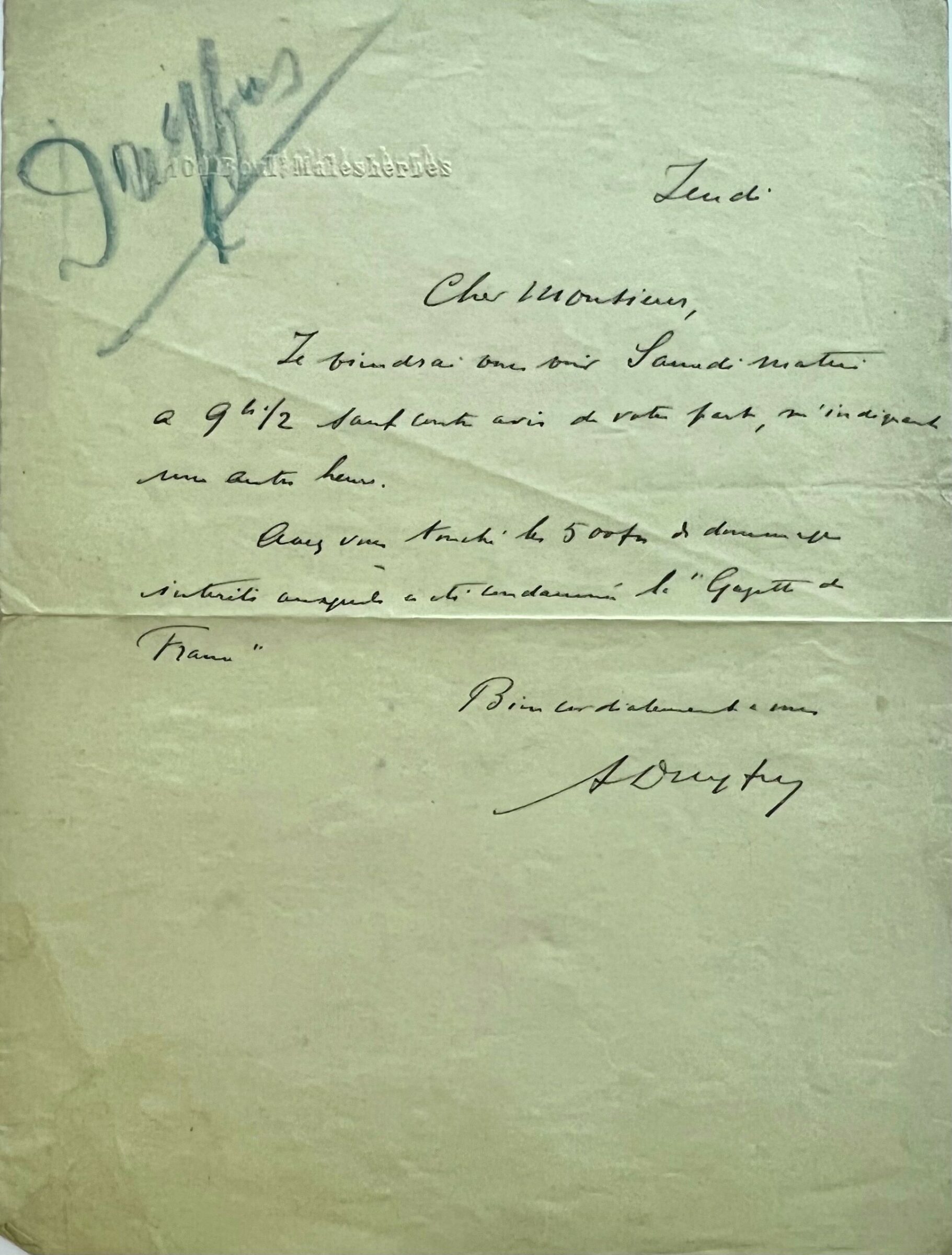 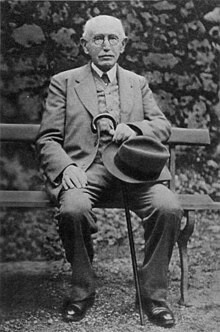 In 1894, the French army accused Dreyfus of proffering military secrets to the Germans. Following his trial and conviction for treason, he was exiled to French Giana’s Devil’s Island off the coast of South America. While his family tried to clear his name, Dreyfus languished for years in solitary confinement as a vast network of anti-Semitic French journals regularly circulated rumors and lies about him. “The press war erupted when a new style of journalism was beginning to flourish… High-speed presses enabled newspapers to be printed in large numbers. In Paris, nearly 100 newspapers and journals competed for readers. ‘Dueling newspapers’ emerged specifically to attack and counterattack one another over the latest revelations in what now was simply called ‘The Affair.’ Newly invented graphic processes allowed newspapers and other publishers to mass-produce photographs and other types of illustrations. The press war generated numerous posters, cartoons, caricatures, comic strips, picture postcards, board games, and other items that were often little more than pro- or anti-Dreyfus propaganda. One famous poster portrayed Dreyfus as a snake-like monster with a sword labeled, ‘The Traitor,’ piercing his body,” (“The Dreyfus Affair and the Press, https://www.crf-usa.org/bill-of-rights-in-action/bria-11-1-b-the-dreyfus-affair-and-the-press).

French Major Ferdinand Walsin-Esterhazy, the actual spy, and Lt.-Col. Hubert-Joseph Henry, who had forged much of the supporting evidence used against Dreyfus, conspired to cover up their involvement by forging additional evidence. The truth finally emerged during the summer of 1898 after the confession, imprisonment and suicide of Henry. Following his suicide, the Gazette de France (the journal Dreyfus refers to in our letter), a royalist mouthpiece and the oldest weekly magazine in France, helped make Henry a hero. On its pages, Charles Maurras, “proclaimed Henry’s virtue and transfigured him into a martyr for a just cause. He developed his thesis [of the “patriotic forgery”] in two articles that appeared on September 5 and 6 [1898]. ‘The energetic plebeian’ had fabricated his forgery ‘for the public good, confiding his deed to no one, not even to the leaders whom he loved, consenting to run the risk entirely on his own…’” (The Affair: The Case of Alfred Dreyfus, Bredin).

“While initially anti-Dreyfus sentiments dominated the daily papers, supporters of Dreyfus slowly found their voice, aided ultimately by Emile Zola’s famous accusation—where else but on the front page of a daily newspaper. Zola’s 1898 “J’accuse” was as much an act of typographical genius as a rhetorical one: the bold-faced letters of his plea demanded attention through dramatic visual revolt against the broadsheet itself,” (“Revisiting Dreyfus: Fake News and Alternative Facts in the Nineteenth Century,” Wonders & Marvels, https://www.wondersandmarvels.com/2017/02/revisiting-dreyfus-fake-news-alternative-facts-nineteenth-century.html, Mesch). Despite the involvement of the anti-Dreyfusard press and its adherents, as well as the counterparts trying to clear Dreyfus’ name in the press, it was not until 1906 that the Court of Cassation finally cleared Dreyfus’ name.

Folded and lightly creased with some staining and wear. An unidentified hand has scrawled “Dreyfus” in blue pencil in the upper left corner. In very good condition. 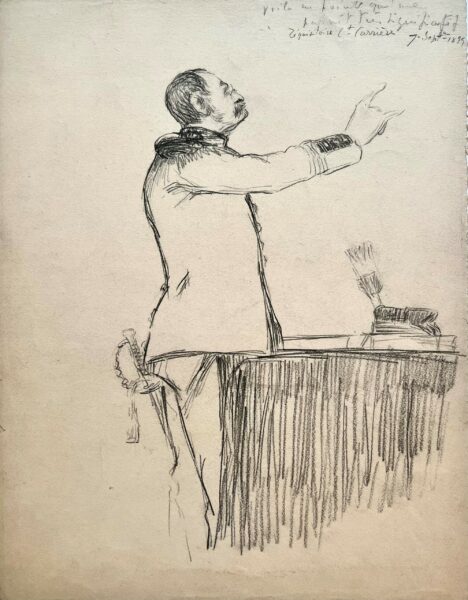 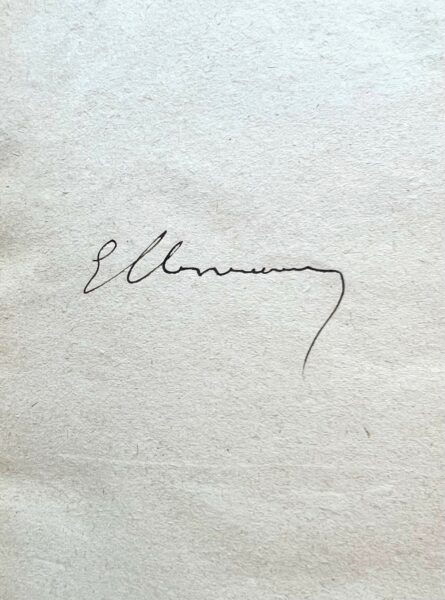 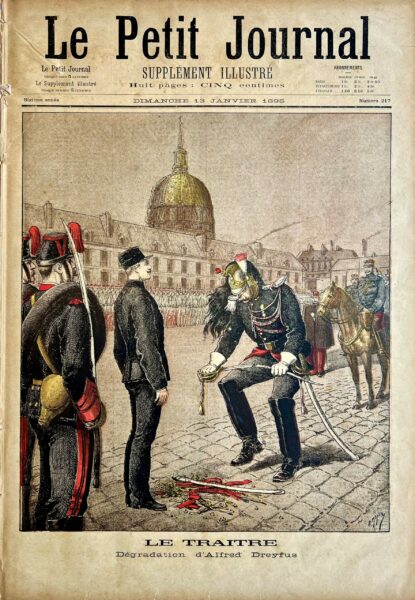