BARAKA, IMAMU AMIRI (EVERETT LEROI JONES). (1934-2014). Controversial and influential American writer known for his poetry and writings on jazz and Black Nationalism. Signed book. (“Amiri Baraka”). 4pp. On double leaves, sewn into wrappers. Small oblong 4to. (10½” x 8”). N.p., N.d. (published by Painted Earth Editions, 1979). First edition, first printing, signed limited edition of “Spring Song.” One of 26 signed copies of Baraka’s short poem signed by Baraka on the colophon and numbered (H/Z) in pencil. Printed at the Tideline Press for David Schulson with the title pasted on the front wrapper and publisher and title blind-embossed on the illustrated title page. 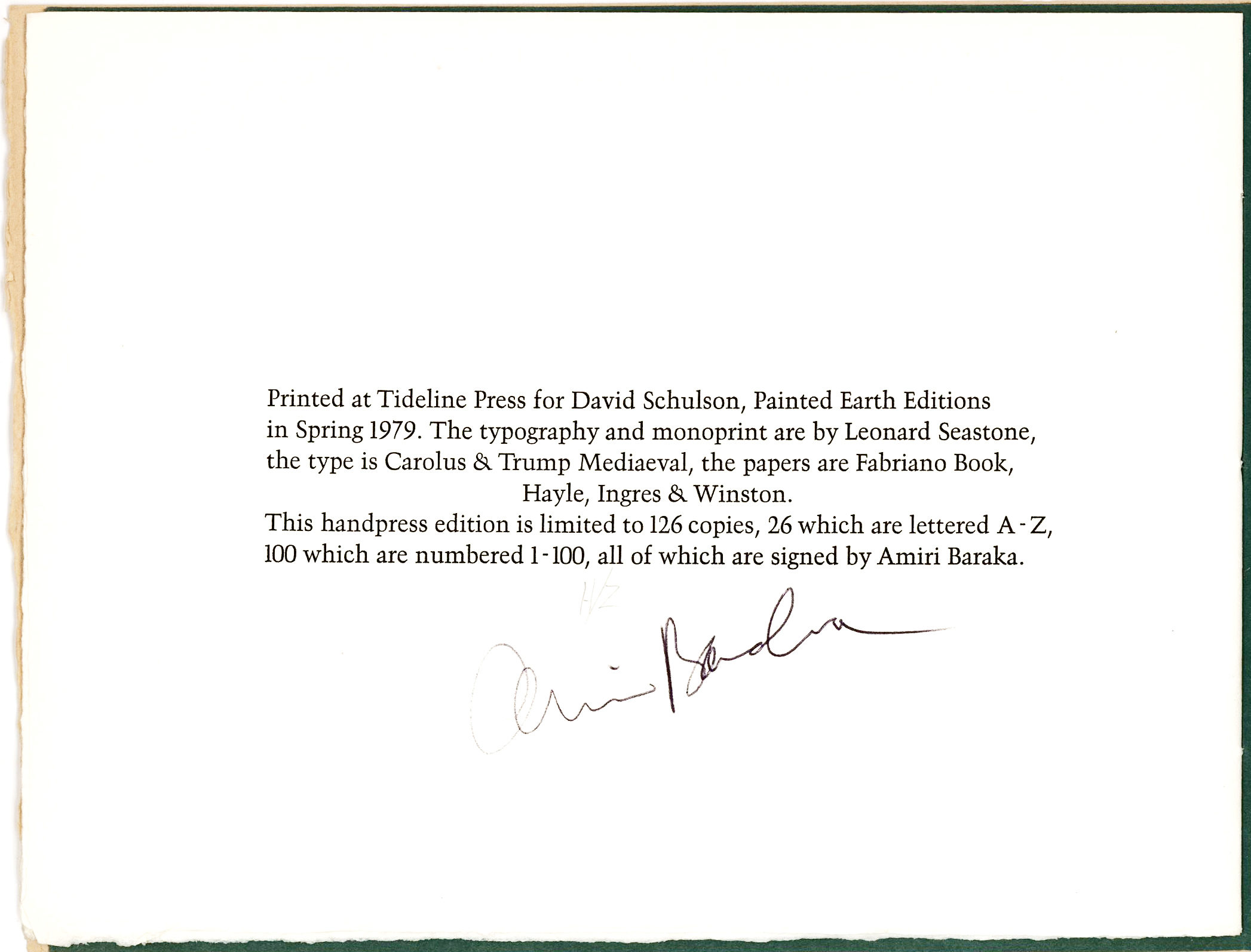 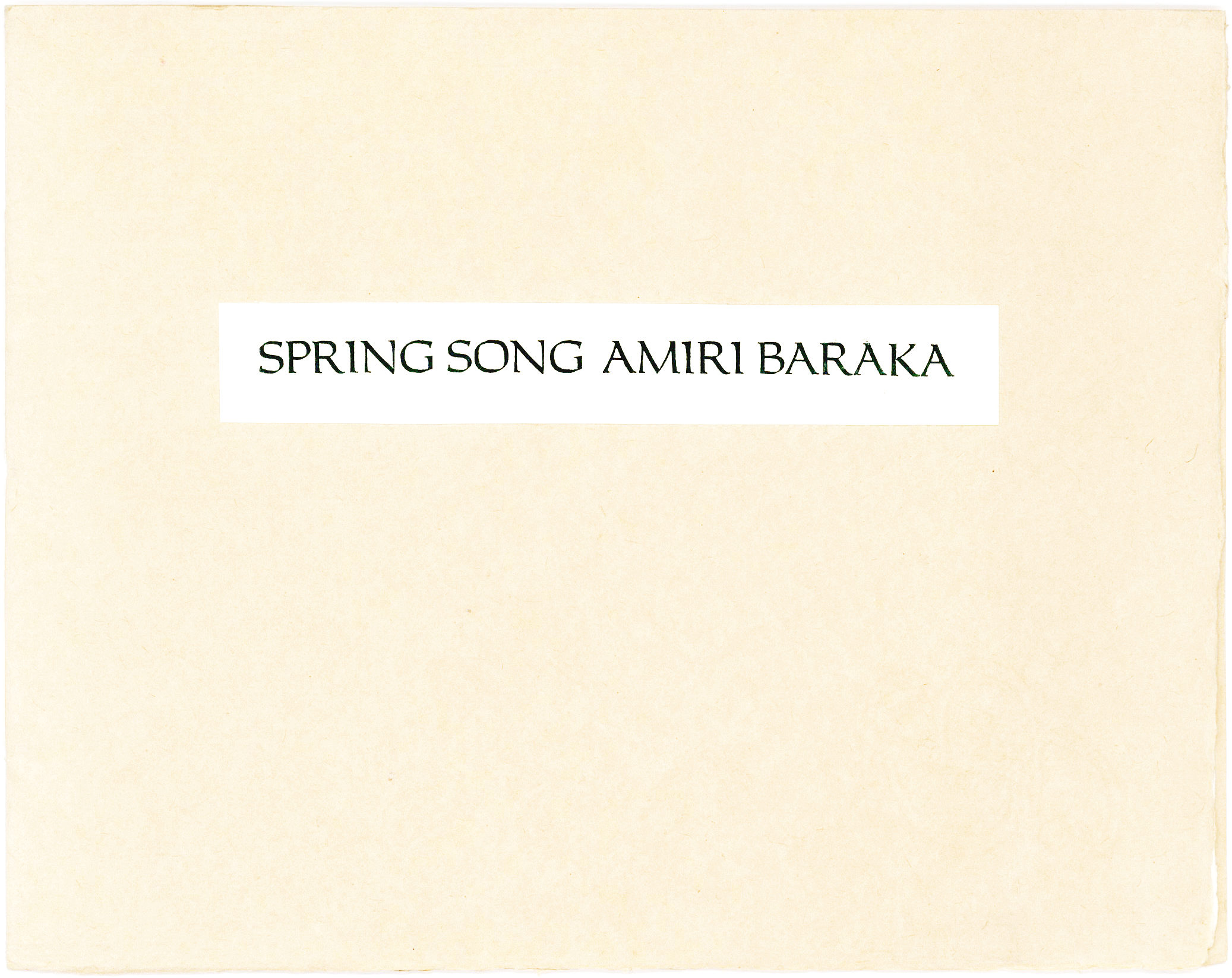 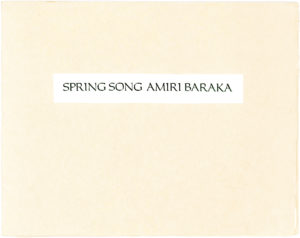 Born Everett LeRoi Jones in Newark, New Jersey, Baraka began writing poetry while in the United States Air Force, which he cited as one of his earliest experiences of racism. After a dishonorable discharge for possession of communist writings, Baraka moved to Greenwich Village, where he joined the Beat literary scene, worked as an editor and literary critic and founded his own press and several literary magazines. One, The Floating Bear, faced federal charges of obscenity for its publication of William Burroughs’ “Roosevelt after the Inauguration.” In 1961, he co-founded the influential New York Poets Theatre.

Increasingly drawn to Black Nationalism, and following the 1965 assassination of Malcolm X, Jones changed his name to Amiri Baraka. The same year, his poem “Black Art” became a manifesto for the Black Arts Literary Movement. However, by the mid-1970s, he had moved away from Black Nationalism towards Marxism. He held a number of notable faculty positions, but was arrested several times, once for possession of a firearm during the Newark Riots. During his trial, the judge read his poem “Black People,” which contained the lines: “All the stores will open if you say the magic words. The magic words are: ‘Up against the wall motherfucker this is a stick up!’” Although he was sentenced to three years in prison, the verdict was later overturned and he joked that he had been charged with possession of “two revolvers and two poems.” During the 1980s, Baraka was accused of antisemitism, in part, for his Village Voice article entitled “Confessions of a Former Anti-Semite.” After the September 11, 2001 terrorist attacks, he was again criticized for his poem “Somebody Blew Up America?” At the time of its publication, Baraka was poet laureate of New Jersey, a post that was subsequently abolished in order to effect his removal. 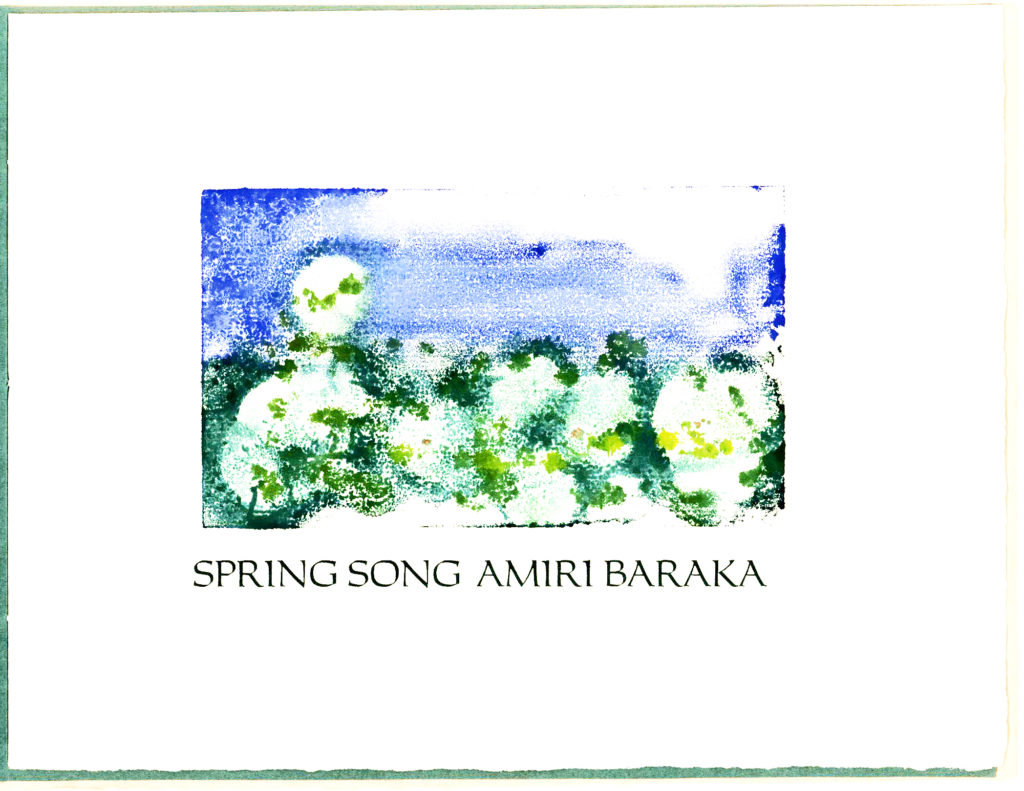 In addition to his numerous collections of poetry, Baraka authored plays and works of fiction and nonfiction including Blues People, Black Music, The Music: Reflections on Jazz and Blues, and The Essence of Reparations. “Baraka’s legacy as a major poet of the second half of the 20th century remains matched by his importance as a cultural and political leader. His influence on younger writers has been significant and widespread, and as a leader of the Black Arts movement of the 1960s Baraka did much to define and support black literature’s mission into the next century. His experimental fiction of the 1960s is considered some of the most significant African-American fiction since that of Jean Toomer. Writers from other ethnic groups have credited Baraka with opening ‘tightly guarded doors’ in the white publishing establishment, noted Maurice Kenney in Amiri Baraka: The Kaleidoscopic Torch, who added: ‘We’d all still be waiting the invitation from the New Yorker without him. He taught us how to claim it and take it,’” (“Amiri Baraka,” https://www.poetryfoundation.org/poets/amiri-baraka). Baraka’s son, Ras Baraka, is currently the mayor of Newark. 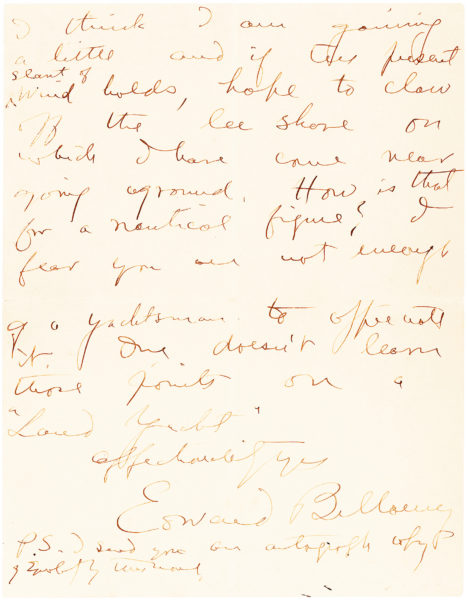 Rare Autograph Letter Signed by the Author of “Looking Backward” Sending Its Sequel, “Equality” to the American Writer and Urban Planner Sylvester Baxter