Autograph Letter Signed to Voltaire: “…what does Rome matter, His Holiness, the Inquisition, and all the Shaved Heads of the irreligious orders that will rail against you”

Signed by Frederick the Great

“If you continue at your current pace, the Dictionary will be done in a short time. The article of the Soul which I received is well done, that of Baptism is superior; it does not touch it, it seems that chance makes you say what is in fact is the continuation of a meditation. Once your dictionary is published, I do not advise you to go to Rome, but what does Rome matter, His Holiness, the Inquisition, and all the Shaved Heads of the irreligious orders that will rail against you? The work you are doing will be useful for the content and pleasant for the style, nothing more is needed. If the soul of your nerves remains in a state of tranquility I will be delighted to see you this evening; otherwise I will believe that it is taking revenge on your body for the damage your mind is doing to it. What is certain is that I do not believe that I nor anyone else is double; the Great ones [i.e., royalty] when speaking about themselves say we, they have not multiplied themselves for that; let us put a hand on our confidence [sic. conscience] and speak frankly: one will admit on good faith that thought and movement, with which our body is endowed, are attributes of animated matter, formed and organized like man. Farewell. F.” 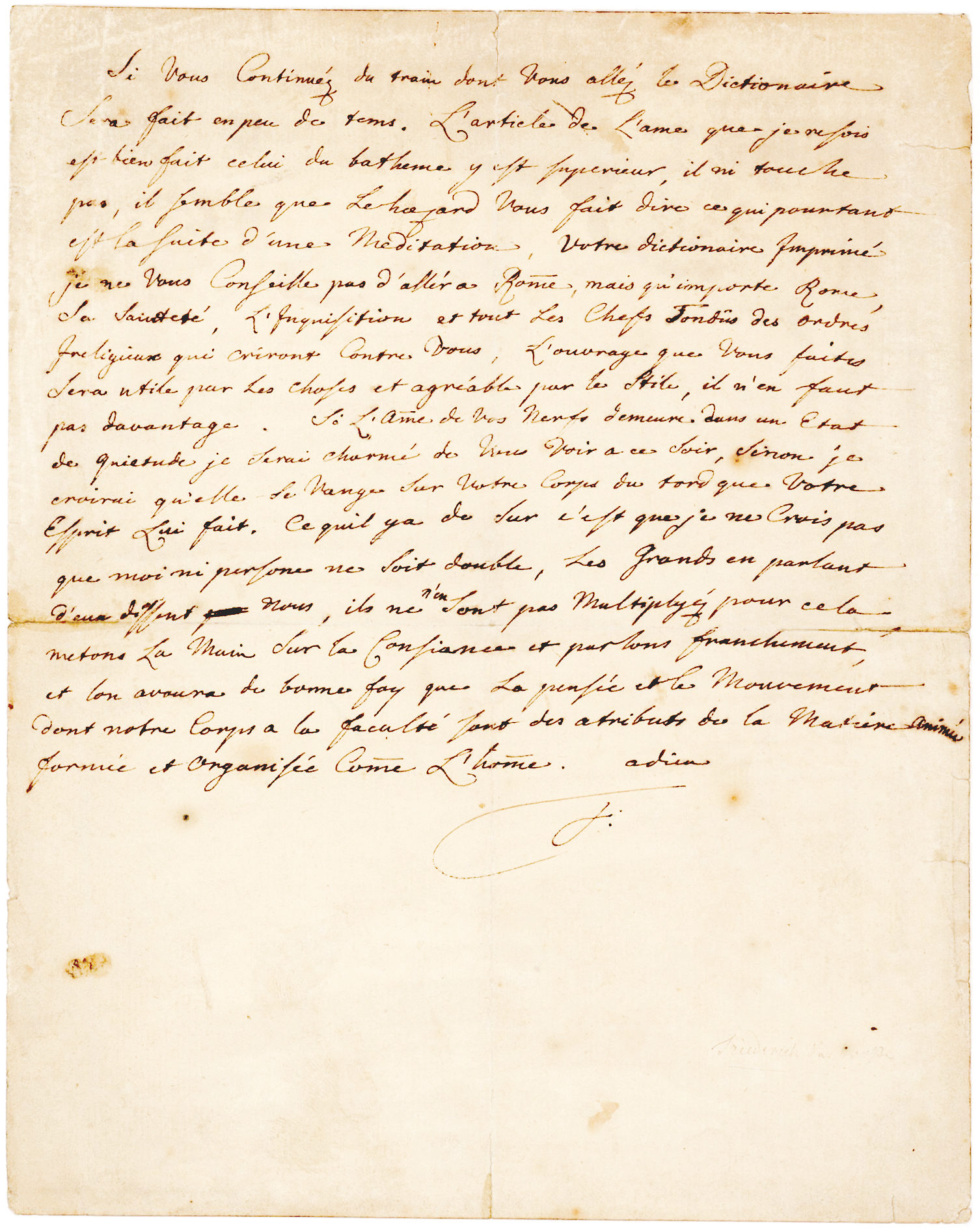 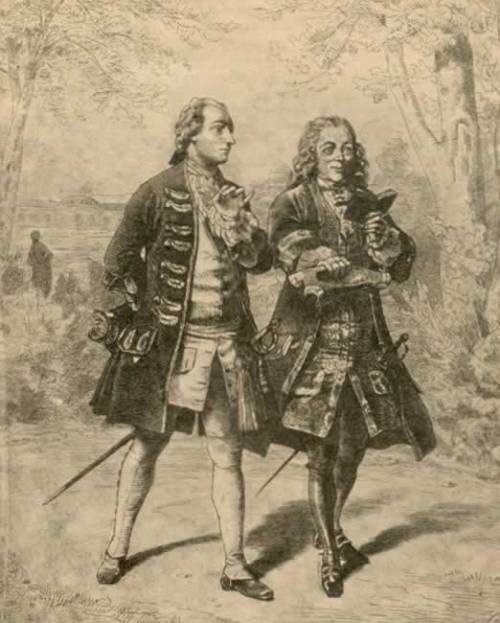 Known in aristocratic circles for his biting humor, it was Voltaire’s relentless display of sarcasm that led to his early imprisonment and subsequent exile. In addition to his personal attacks on French nobility, Voltaire used his pen to assault the Catholic Church and alienate French King Louis XV.

Frederick, Prussia’s future king, was a rebellious son in constant opposition against a cruel and despotic father. Prince Frederick became deeply engrossed in literature, philosophy and the arts – interests the nearly illiterate and obstinately anti-intellectual King Frederick William I profoundly despised and likely considered effeminate in a future ruler. A close friend and tutor of the young prince, Hans Hermann von Katte, was beheaded in front of the future king on his father’s order, when it was discovered that Frederick had planned to escape to Great Britain to escape his Frederick William’s tyranny. Later, Frederick, who played and composed for the flute, engaged in a broad exchange of letters with philosophers that included his incomparable and famous epistolary relationship with Voltaire that began in 1736. Their correspondence “was to last nearly forty-two years and fills three entire volumes of Frederick’s collected works,” (Frederick the Great, A Life in Deed and Letters, MacDonogh).

But Frederick’s interests and responsibilities went far beyond merely philosophizing with the great intellectuals of his age. Upon ascending the throne in 1740, he quickly proved himself a skilled military strategist. A successful general on the battlefield and an able administrator at home, it was Frederick’s intention to rule as a philosopher king. Just a few months after ascending the throne, Voltaire published Frederick’s essay “Antimachiavel,” a refutation of the precepts laid out in Machiavelli’s 16th-century masterpiece, The Prince. The tenets of the Enlightenment led the king to abolish torture, embrace freedom of the press and promote religious tolerance, convictions he shared with Voltaire.

The culmination of Voltaire and Frederick’s long relationship came in 1750 when the king invited the philosopher to live with him in Potsdam, and appointed him chamberlain of the household with commensurate remuneration. In 1752, Frederick and Voltaire came up with the idea for a collaborative dictionary or encyclopedia of reason, which would contain articles critical of religion. Our letter mentions two such articles authored by Voltaire, ‘Soul’ and ‘Baptism.’ However, a rift between Frederick and Voltaire resulted in the philosopher leaving the Prussian court in 1753 and the work was shelved until Voltaire anonymously published, in 1764, his Dictionnaire philosophique, regarded as one of his most important works in his battle against Christian dogmatism and in favor of religious toleration.

Frederick’s letter is published in Besterman (D5056; in response to Voltaire’s, letter D5055) in an edited version due to the unavailability of the original. It was originally sold by Karl & Faber in Munich (October 5, 1951; page 130, No. 925) and is also referred to in OCV, vol.34 (Œuvres alphabétiques, ajouts posthumes): see p.23, 43, 73, 132, 138 as well as the 1789, Cologne publication Supplement aux Oeuvres posthumes de Frederic II, ii. 378-9. Our thanks to Professor Nicholas Cronk Director of the Voltaire Foundation at the University of Oxford and his assistant Birgit Mikus for their research assistance.

Folded into quarters with minor fold tears repaired on the verso; lightly foxed and dust stained and in fine condition.

Autograph Letter Signed to Voltaire: “…what does Rome matter, His Holiness, the Inquisition, and all the Shaved Heads of the irreligious orders that will rail against you”

Signed by Frederick the Great