APCS to his Family on Winning the Nobel Prize for Literature 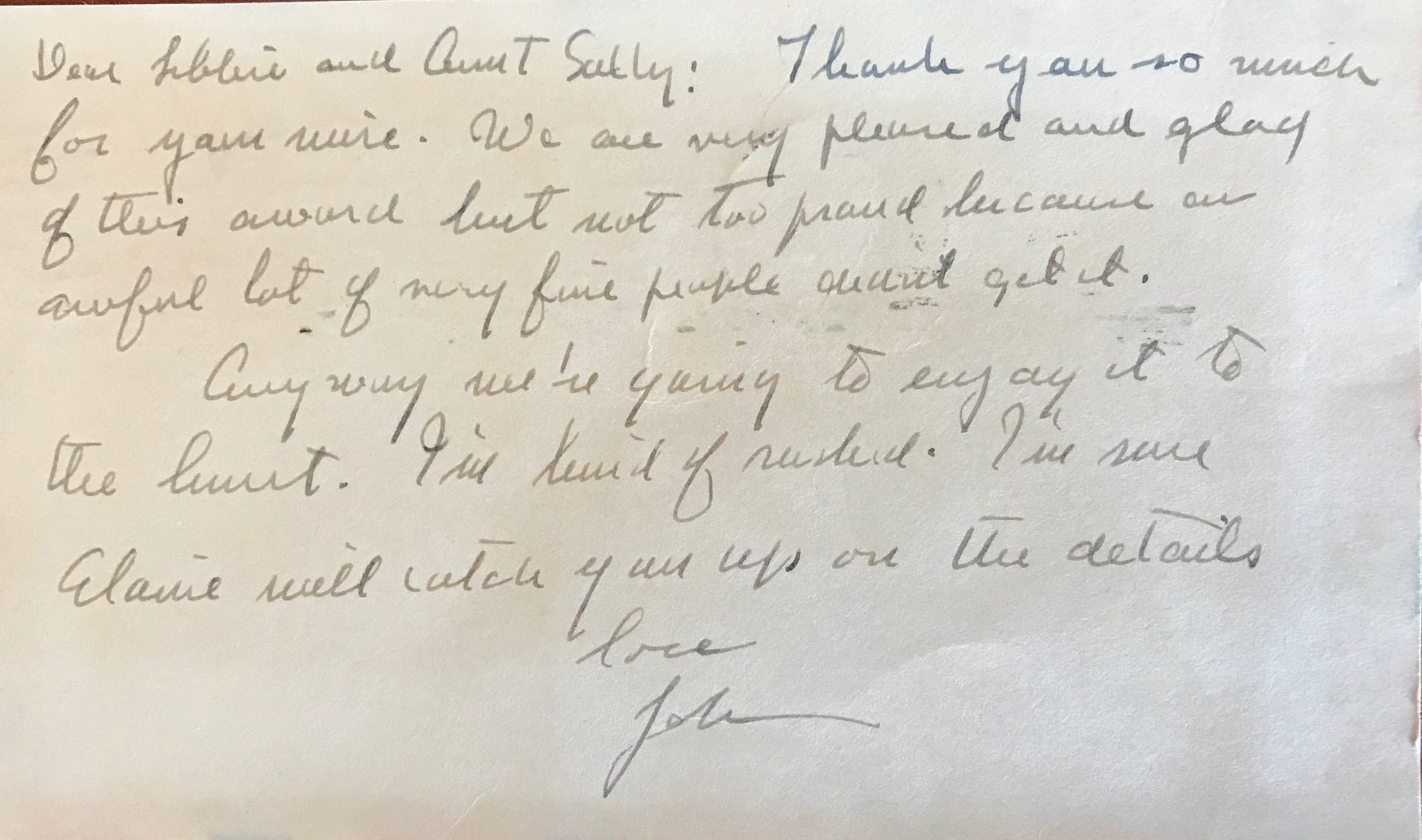 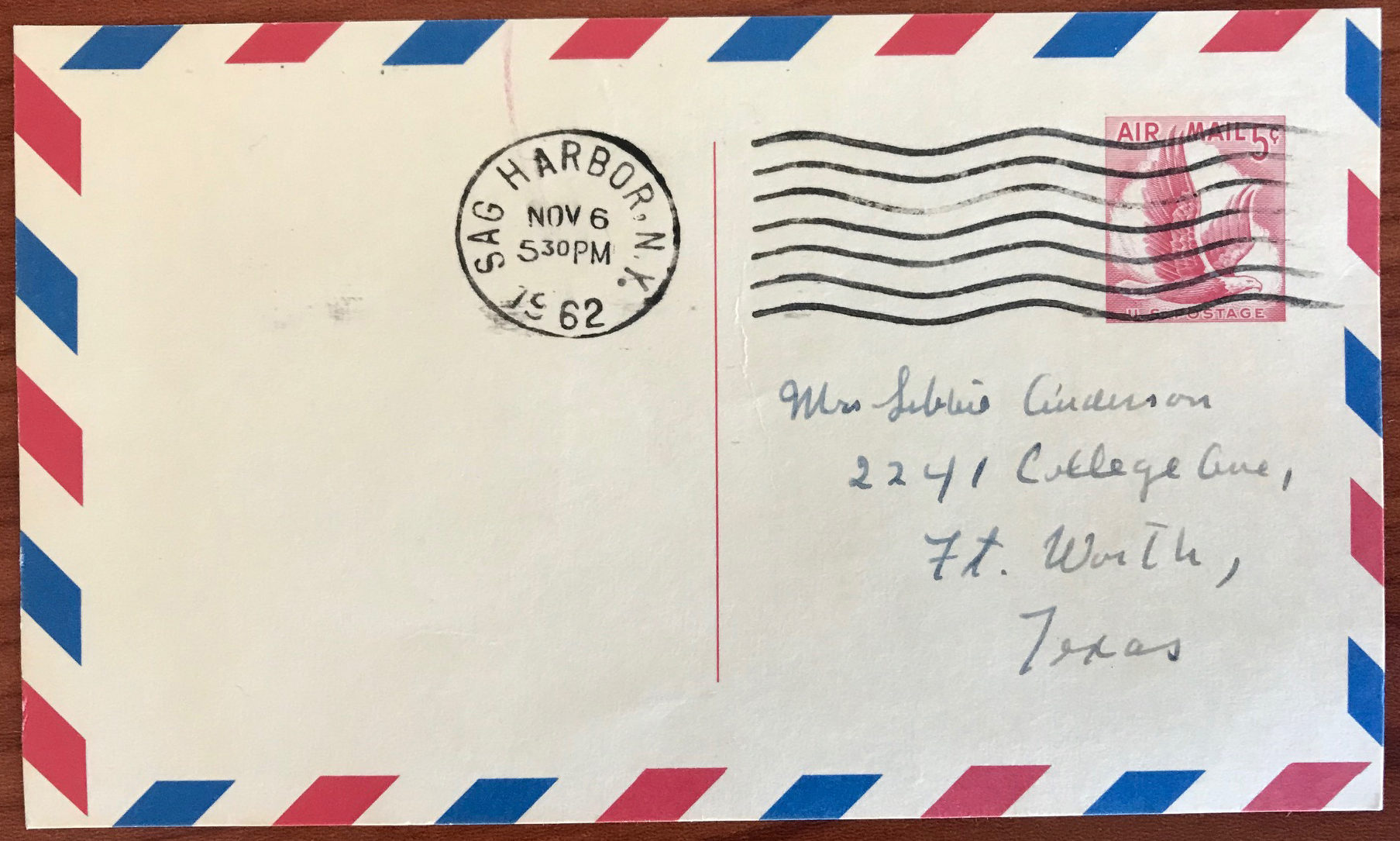 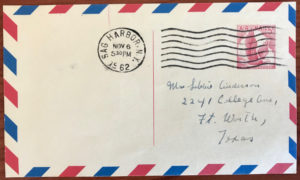 “Dear Libbie and Aunt Sally: Thank you so much for your wire. We are very pleased and glad of this award but not too proud because an awful lot of very fine people didn’t get it.

Anyway we’re going to enjoy it to the limit. I’m kind of rushed. I’m sure Elain will catch you up on the details. Love…”

Accompanied by five pages of autograph notes from his wife, Elaine, including press reports from the festivities:

John & I entering the Royal Palace – The headline below our photo says “Steinbeck dressed in cape made the most elegant entrance”, then it goes on to say, “The ladies must excuse but no one could out-do John Steinbeck’s elegant entrance to the King’s Nobel Dinner. Dressed in a flattering cape over his well-fitted dress suit, he entered the doors majestically, nodding friendly at everybody. He had also time for a short discussion by his car, but soon his utterly elegant wife Elaine grabbed his arm & wanted to go indoors. She was dressed in a Jacqueline Kennedy-cut coat over a tight turquoise gown – (over)

Thousands of bronze-red chrysanthemums decorated the table in the Charles XI Gallery. The king escorted Mrs. Elaine Steinbeck to the table, and the queen was escorted by Max Perutz while Mr. Steinbeck escorted Princess Sibylla. Etc. – etc.

This is the King & Queen & Royal Family greeting the guests. The headline says “120 guests at the king’s dinner for the Nobel Prize winners.”

“Friendly fires sparkled in the Castle of Stockholm last night when the King and Queen received the 120 guests invited to participate in the dinner given for the Nobel Prize winners. Many flowers had been sent from the Royal Gardens and all as very beautiful & solemn when the Royal Family went round greeting their guests – etc. etc.

“The beautiful prize-winner wives did not disappoint us this evening. Mrs. Wilkins [wife of Nobel Prize winner Maurice Wilkins] was dignified with her black shiny hair, black gloves and black velvet coat over a black taffeta gown. – Soon afterwards John Steinbeck entered, magnificent, wearing the only cape-coat of the evening, accompanied by his wife who looked absolutely refined in a full length spinach-green coat over a light blue gown, like cut out of the Vogue Magazine – etc. etc.

“Thousands of dark red chrysanthemums decorated the table in the Charles XI Gallery. No music, no speeches – a tradition which was surely appreciated by the guests, this being the day after the Nobel Feast, so rich in both –

“The winner of the prize for chemistry Dr. Max Perutz was the Queen’s table partner and Mrs. Steinbeck was at the right side of the King. The Earl Marshall escorted Mrs. Perutz, John Steinbeck escorted the Mother Princess Sibylla – etc – etc –” 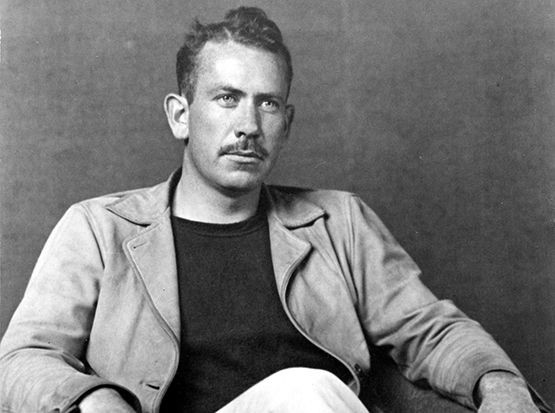 In 1962, the Swedish Academy awarded the Nobel Prize for Literature to Steinbeck, “for his realistic and imaginative writings, combining as they do sympathetic humour and keen social perception.” He had been nominated eight times before, in 1943, 1944, 1945, 1949, 1958, 1959, 1960 and 1961. In 1962, he was selected the winner from 66 authors nominated, and was a heavily criticized choice, described as ‘one of the Academy’s biggest mistakes’ in one Swedish newspaper. The New York Times asked why the Nobel committee gave the award to an author whose ‘limited talent is, in his best books, watered down by tenth-rate philosophizing’, adding; ‘we think it interesting that the laurel was not awarded to a writer… whose significance, influence and sheer body of work had already made a more profound impression on the literature of our age,’” (“Swedish Academy reopens controversy surrounding Steinbeck’s Nobel Prize,” The Guardian, Flood). When the press asked him if he felt he deserved the prize, he replied, “Frankly, no.”

His acceptance speech was gracious and self-deprecating, opening with thanks and this statement: “In my heart there may be doubt that I deserve the Nobel award over other men of letters whom I hold in respect and reverence – but there is no question of my pleasure and pride in having it for myself.” He also discussed the role of the novelist who “is delegated to declare and to celebrate man’s proven capacity for greatness of heart and spirit – for gallantry in defeat – for courage, compassion and love.” He further stated “Having taken Godlike power, we must seek in ourselves for the responsibility and the wisdom we once prayed some deity might have. Man himself has become our greatest hazard and our only hope. So that today, St. John the apostle may well be paraphrased… In the end is the Word, and the Word is Man – and the Word is with Men.”

Interestingly, in 2013, the Swedish Academy released the short list of 1962 nominees, revealing that the committee itself was not enthusiastic about choosing Steinbeck with one committee member stating, “There aren’t any obvious candidates for the Nobel prize and the prize committee is in an unenviable situation,” (ibid.). The brutal criticism that rained down on Steinbeck for the award caused him a great deal of insecurity and he never wrote another work of fiction.

At the December 10, 1962 ceremony, Swedish King Gustaf VI awarded Nobel prizes to Steinbeck as well as Max F. Perutz and John C. Kendrew for Chemistry; and to Francis Crick, James Watson and Maurice Wilkins for Physiology or Medicine.

Elaine Anderson Steinbeck (1914-2003), an actress and theater manager, became Steinbeck’s third wife on December 28, 1950, and the two remained married until his death. Our letter is written to her mother, Libbie and her aunt Sally.

Postcard is addressed, stamped and postmarked on the verso. Elaine’s notes are written in pencil on recto and verso. In fine condition.

APCS to his Family on Winning the Nobel Prize for Literature 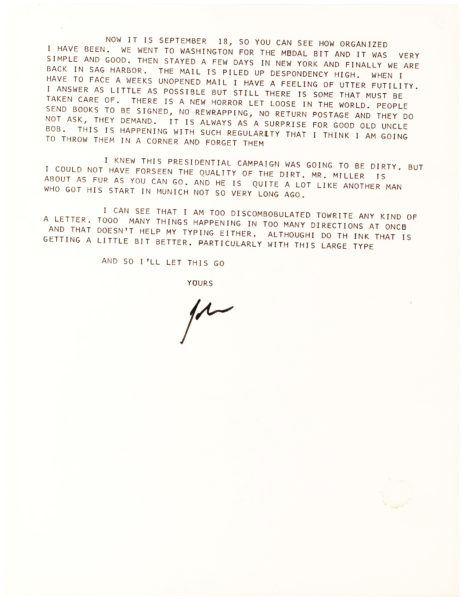