Ansel Adams on the Death of His Childhood Friend and Teacher, Composer Henry Cowell 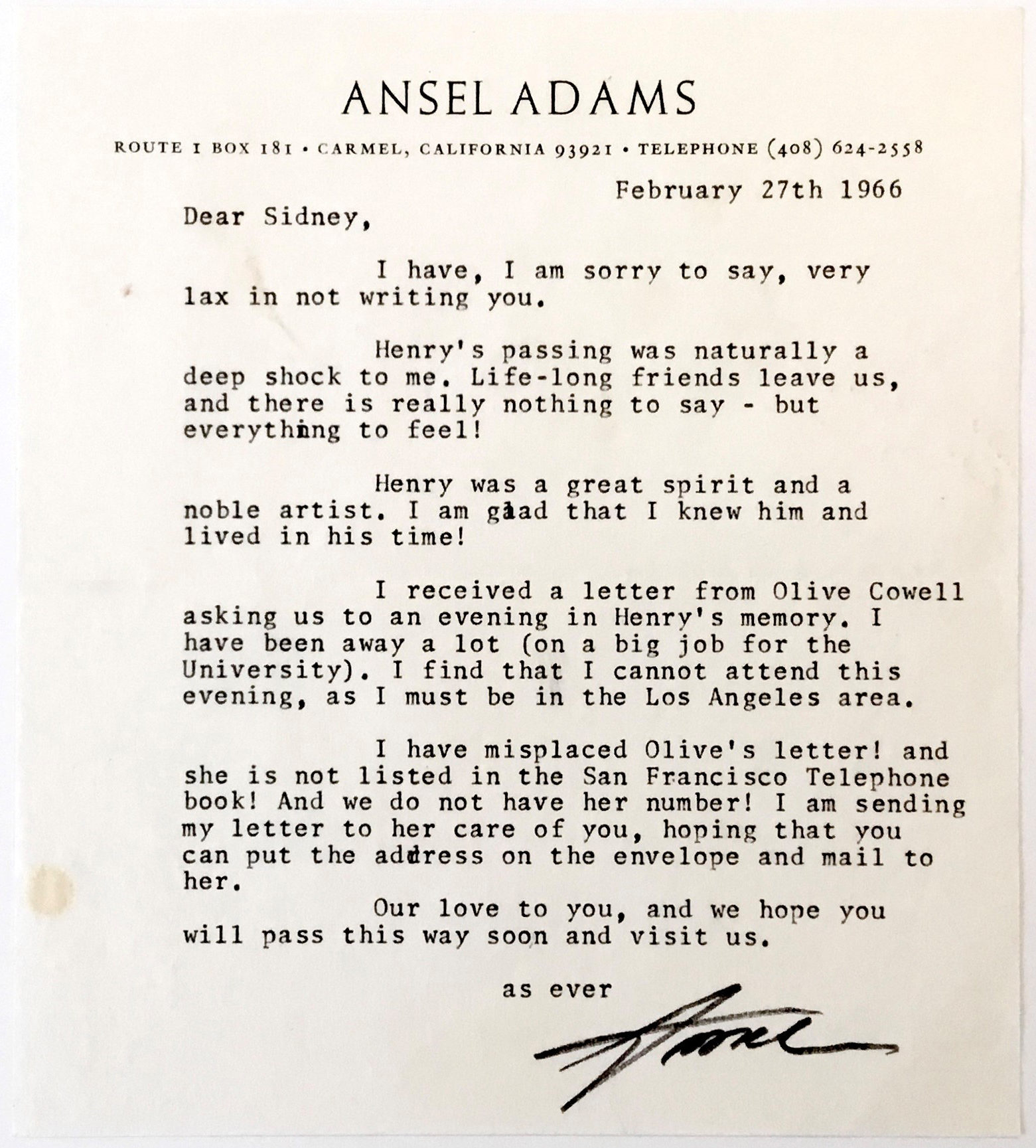 Henry’s passing was naturally a deep shock to me. Life-long friends leave us, and there is really nothing to say – but everything to feel.

Henry was a great spirit and a noble artist. I am glad that I knew him and lived in his time!

I received a letter from Olive Cowell asking us to an evening in Henry’s memory. I have been away a lot (on a big job for the University). I find that I cannot attend this evening, as I must be in the Los Angeles area.

I have misplaced Olive’s letter! and she is not listed in the San Francisco Telephone book! And we do not have her number! I am sending my letter to her care of you, hoping that you can put the address on the envelope and mail to her.

Our love to you, and we hope you will pass this way soon and visit us.…” 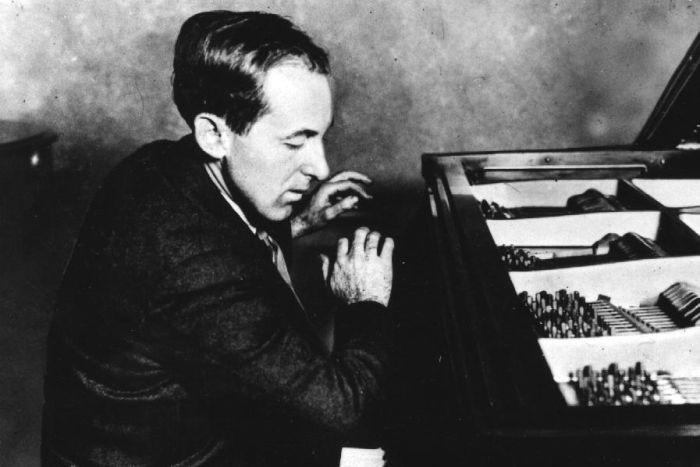 A child prodigy who received no musical training other than the Irish folk music which his father introduced to him, Henry Cowell began to compose at a young age and entered the University of California, Berkeley, under the tutelage of the eminent musicologist Charles Seeger (father of folk singer Pete Seeger). He came to lead a circle of composers known as ultra-modernists that included Carl Ruggles, Edgard Varèse, Ruth Crawford, and Colin McPhee. In 1925, Cowell founded the California-based New Music Society and staged concerts with the help of Wallingford Riegger and Arnold Schoenberg. Cowell also founded New Music, a quarterly devoted to contemporary composition that published works by Aaron Copland, Paul Bowles, Otto Luening, and Cowell’s close friend, Charles Ives. Cowell was especially noted for his innovative use of the standard grand piano, which he played in unusual ways, and into which he introduced other elements to produce new sounds. The Banshee, for example, completed in 1925, and the first movement of his Irish Suite are both performed on the so-called “string piano,” on which the performer plays the strings while an assistant depresses the damper pedal. 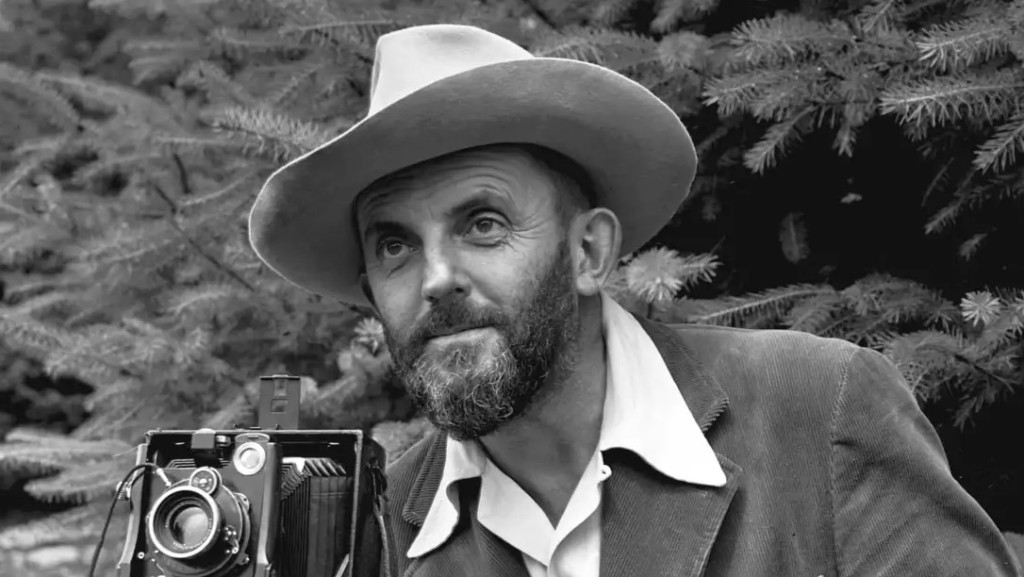 Cowell and Adams were neighbors and, at age 12, Adams took piano lessons from Cowell, who was 4 years his senior. Adams was, in fact, inspired by Cowell to pursue a career in classical music, before taking up photography as a profession in 1927. By the mid-1930s, Adams was recognized as one of the art’s leading practitioners, whose stark black-and-white nature scenes are well known and often imitated. He published numerous books on photographic technique, helped found the first museum photography collection at New York’s Museum of Modern Art, and established the first academic department of photography at San Francisco’s California School of Fine Arts. Throughout his lifetime Adams was an advocate for photography as a fine art and served as a Sierra Club director, aiding preservation efforts with a visual catalog of the American wilderness.

Our letter mentions Olive Cowell (1887-1984), a patron of the arts and Henry Cowell’s stepmother and supporter, whose San Francisco home was a gathering place for Henry and his fellow composers. She was also a professor of international relations and the founder of the first International Relations department in the United States.

Ansel Adams on the Death of His Childhood Friend and Teacher, Composer Henry Cowell 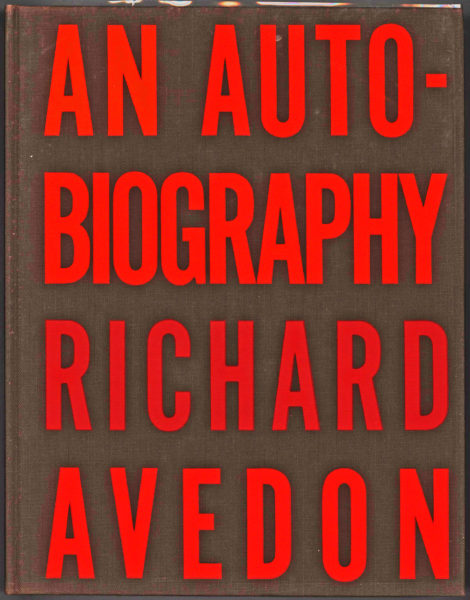