ALS to Kennedy’s Deputy Secretary of Defense, with Whom Jackie was Intimately Involved: “I showed it to John who was fascinated”

“I do thank you for sending me your words from that wonderful evening at Christies. All the experience you have had – and the wisdom it has given you. I showed it to John who was fascinated. The tribute they paid you was so moving. I felt so lucky to be there – and more so to be sitting beside you. Thank you dear Ros – I hope you have the most wonderful cruise and summer. Always affectionately, devotedly…” 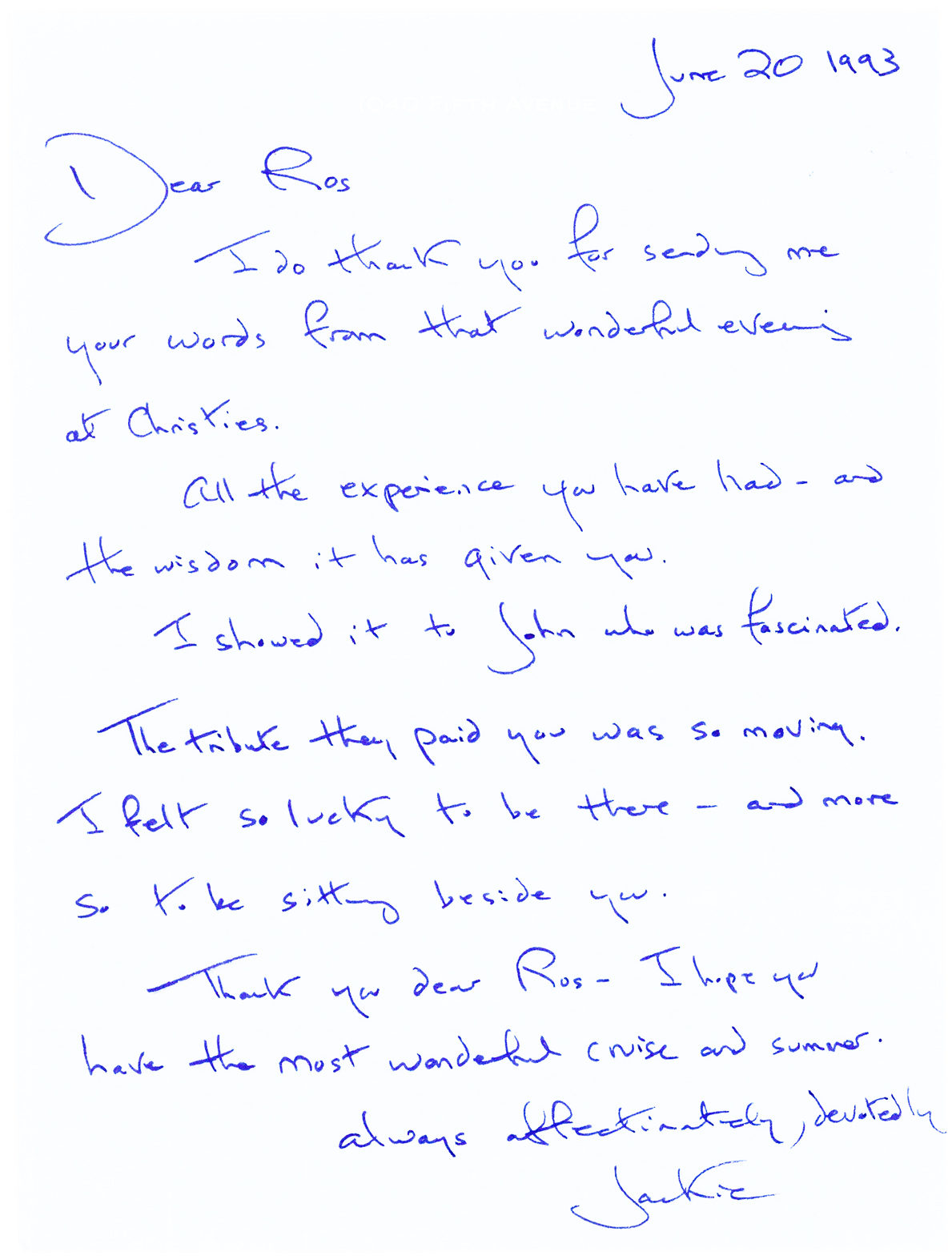 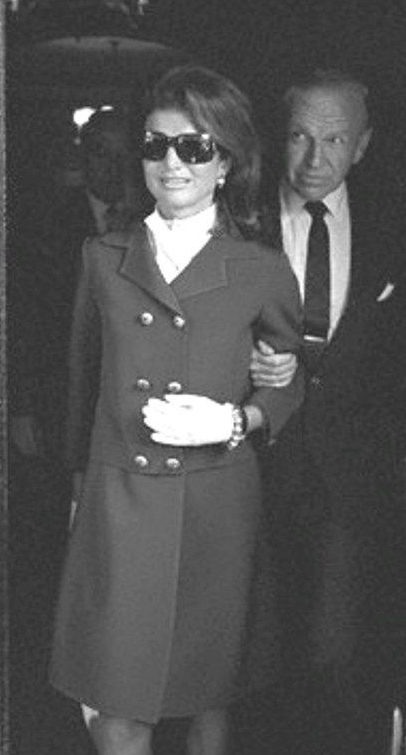 A protégé of Harry Truman’s secretary of defense, Robert A. Lovett, Gilpatric was hand-picked by President Kennedy to join his administration. As deputy secretary of defense under Robert McNamara, Gilpatric advised Kennedy during the anxious days of the Cuban Missile Crisis, and beginning in 1964, he chaired President Johnson’s Task Force on Nuclear Proliferation.

On February 10, 1970, the announced auction of four personal letters Jackie wrote to Gilpatric between April 18, 1963 and November 13, 1968 hit the news and caused a world-wide scandal, becoming the subject of public curiosity and private anguish. Stolen by Theodore Donson, a former employee at Gilpatric’s law firm of Cravath, Swain & Moore, Donson consigned the letters to Manhattan autograph dealer Charles Hamilton, who paid him an advance of $500. Gilpatric had been notified by The Washington Post that the newspaper intended to publish the letters’ content and, despite the threat of legal action, did so on February 10, 1970, under the headline “Jackie and the Purloined Letters,” by Maxine Cheshire. Cheshire reported that according to Hamilton, who had originally tipped her off to the story, “Mr. Gilpatric sounded as if he were weeping when he called…his voice was shaking and he was concerned that the sale, if it went through, would ruin his friendship with Mrs. Onassis.” Ultimately, the “Dear Ros” letters were handed over to the Manhattan District Attorney, and returned to Gilpatric, but not before their publication led to widespread speculation about the pair’s relationship. Ros’ friendship with Jackie may have caused the final breakup of his third marriage (of five) to Madelin Thayer Gilpatric; in fact, Mrs. Gilpatric set their divorce in motion the same day the letters were seized under subpoena. She was quoted as saying, “They were very, very close. I have my own feelings about that, but I won’t go into them. Just say it was a particularly warm, close, long-lasting relationship,” (the New York Post, February 11, 1970). The scandal also distressed Jackie, as revealed in the February 12, 1970, New York Daily News front-page headline: “‘Dear Ros’ Fuss Upsets Jackie.” Extremely reserved, Jackie avoided public scrutiny and initiated several lawsuits against the paparazzi who invaded her privacy.

Jackie first met Washington’s most eligible bachelor, Senator John F. Kennedy, while employed as the Washington Times-Herald’s “Inquiring Camera Girl.” Their engagement in June 1953 and wedding three months later marked the beginning of “Camelot” and the public’s fascination with the couple. Jackie is remembered equally for her style and grace both as first lady and as a widow after her husband’s assassination in Dallas, Texas, on November 22, 1963. The president was shot while riding in a Lincoln convertible seated next to Jackie whose frightened response was witnessed by millions on live television. “The assassination and its aftermath was the first national tragedy to play out during the era of modern mass communication,” (Dear Mrs. Kennedy: The World Shares Its Grief, Letters November 1963, Mulvaney and De Angelis).

Following JFK’s death, Jackie devotedly worked to preserve his legacy and, with her brother-in-law Robert F. Kennedy (with whom she purportedly engaged in a 4-year love affair), famously sued to block publication of The Death of a President, William Manchester’s authorized account of the assassination. The June 1968 assassination of Robert, then campaigning for president, dealt her another blow. It was Gilpatric who drove a shocked and grieving Jackie to the airport to fly to California upon hearing the news. After the death of her second husband, Greek shipping magnate Aristotle Onassis, Jackie divided her time between Hyannis Port, Martha’s Vineyard and New York where she worked in publishing and played an important role in the city’s nascent historical preservation movement. At the end of 1993, after a horse riding accident, she was diagnosed with cancer to which she succumbed the following May.

Our letter mentions Jackie’s son, John Kennedy, Jr. (1960-1999) who was only three years old when JFK died and the photograph of the little boy saluting his father’s coffin is one of the most memorable images surrounding the president’s tragic death. He lived his life in the public eye and perished along with his wife and sister-in-law when a plane he was piloting crashed into the ocean in 1999.

A warm letter acknowledging Gilpatric’s public service. Written on pale blue paper in dark blue ink. Folded in half and in excellent condition.

ALS to Kennedy’s Deputy Secretary of Defense, with Whom Jackie was Intimately Involved: “I showed it to John who was fascinated” 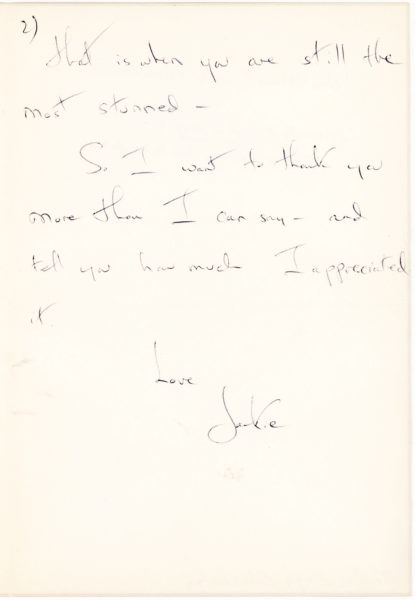 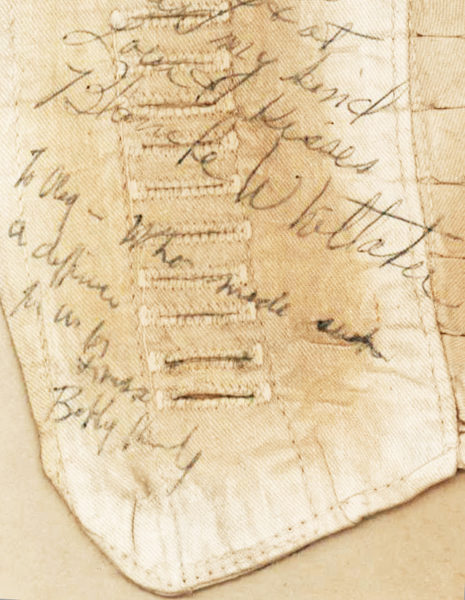