BEN-GURION, DAVID. (1886-1973). Polish-born Israeli statesman and Israel’s first prime minister; in 1948 he proclaimed her independence. His Memoirs were published in 1970. TLS. (“David Ben Gurion”). 1p. 8vo. Sde-Boker, January 17, 1955. To Russian-born Israeli Zionist and Knesset member FEIGE ILANIT (1909-2002) and her husband Shlomo living at the Kibbutz Gan-Shmuel. In Hebrew with translation. This letter marked “Copy” (though it is ink-signed by Ben-Gurion) was sent to the Minister for Defense Pinhas Lavon (1904-1976). 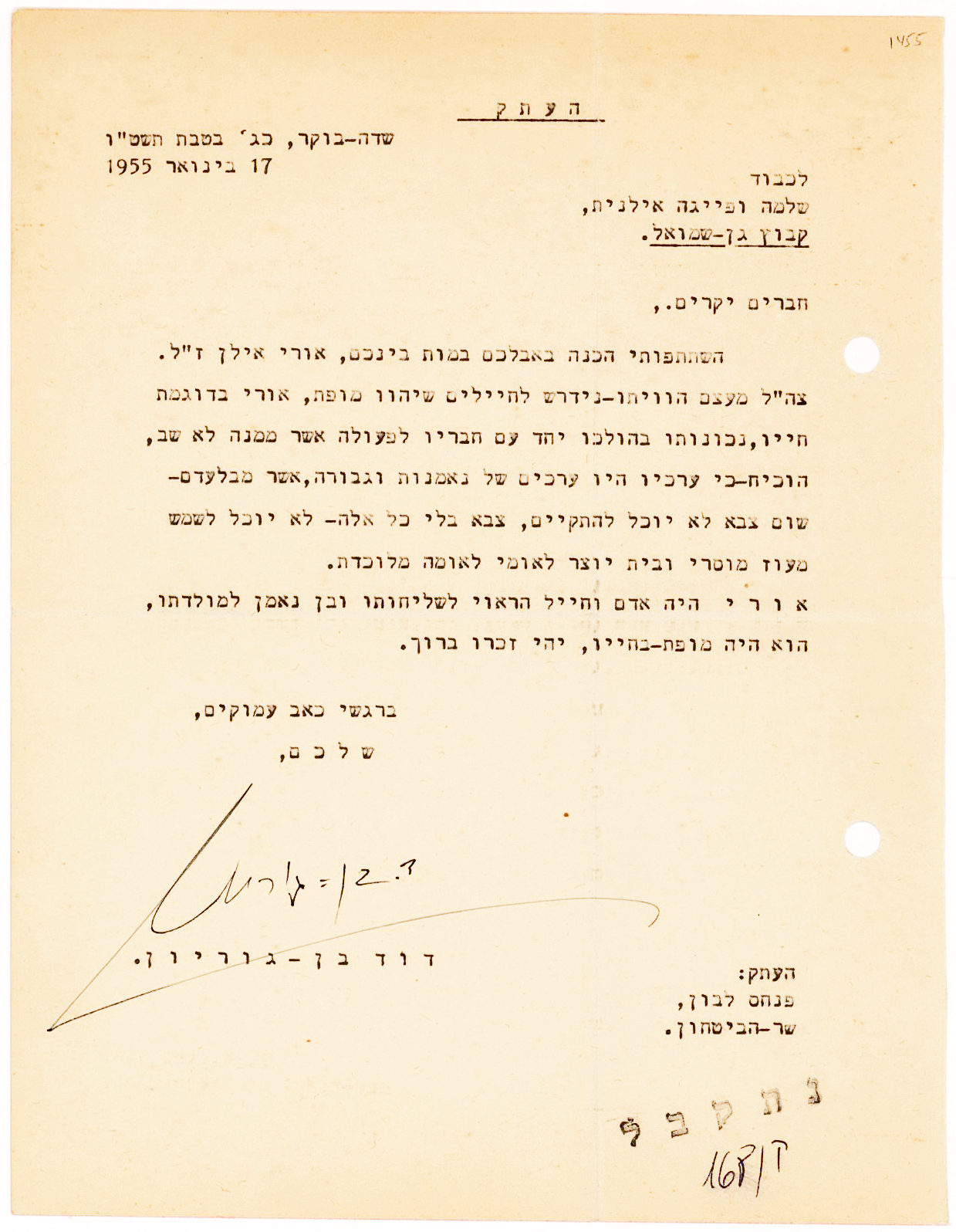 “My sincere participation in your grief upon the death of your son, Uri Ilan, of blessed memory.

The IDF, by its very essence, requires soldiers to be exemplary. As in his life, Uri’s willingness to accompany his fellow operatives on a mission, from which he did not return, proved that his values were values of loyalty and heroism, without which, no army can exist. An army without all these cannot serve as a moral stronghold and a creator of a cohesive nation.

Uri was a man and a soldier worthy of his mission and a faithful son to his homeland, he was exemplary in his life, may he be a blessed memory.

In feelings of deep pain…”

An early supporter of Zionism, Ben-Gurion moved to Palestine in 1906 to become a farmer. After his expulsion by Turkey at the outbreak of World War I, he rallied British and American support for increased Jewish immigration to Palestine. His decades of promoting Zionism led to a strengthening of Palestine’s Jewish community and on May 14, 1948, Ben-Gurion proclaimed the birth of the state of Israel. He assisted in creating the Israeli army and often used military force to thwart Arab violence. Despite his 1954 retirement from the positions of prime minister and minister of defense, he returned to public life a year later, serving first as minister of defense beginning in February 1955 followed by his reelection as prime minister the following November. 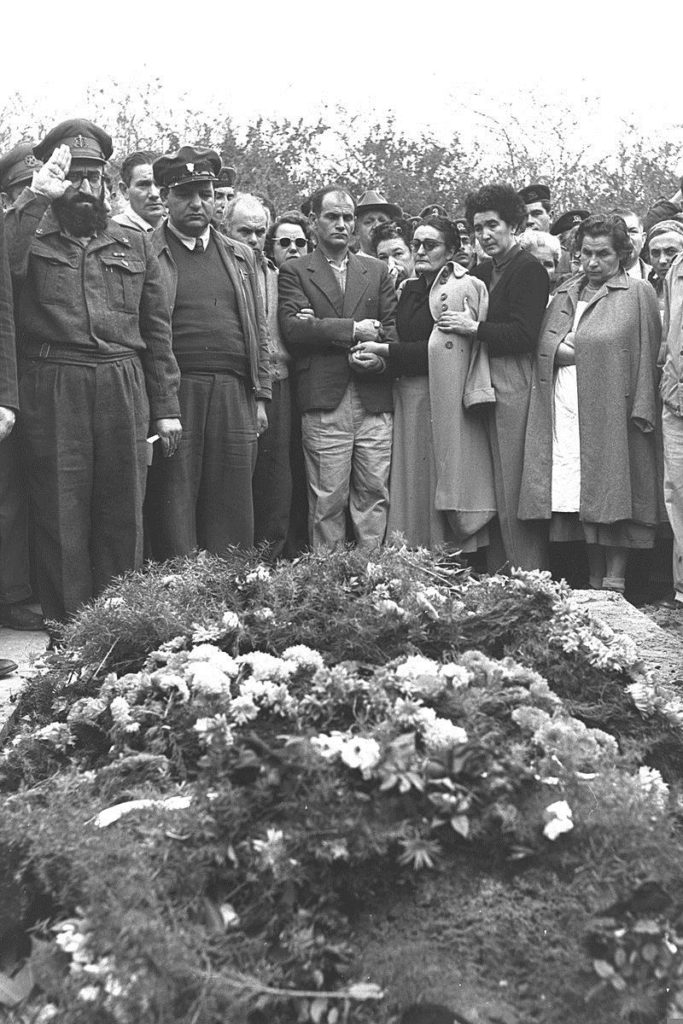 Mourners at the grave of Uri Ilan

Our letter was written to the parents of Uri Ilan (1935-1955), an Israeli soldier who, along with four comrades, was captured by Syrian forces six weeks earlier, on December 8, 1954, while wiretapping telephone lines in Syrian controlled Golan Heights. Their arrest precipitated an international incident when, on December 12, and without the authorization of Prime Minister and Foreign Minister Moshe Sharett, the armed forces hijacked a Syrian civilian airliner and detained its passengers for two days in an attempt to secure the soldiers’ release.

Sent to Damascus for interrogation, the IDF soldiers were separated and tortured. After Ilan was deceived by his captors who stated that his comrades had been killed, he decided to hang himself, after hiding nine small notes in his clothing that were addressed to Israel, the most famous one of which stated “I did not betray. I committed suicide.” His body was returned to Israel and he was buried in Kibbutz Gan Shmuel on January 14, 1955, three days prior to our letter. In March 1956, the remaining four soldiers were exchanged for 40 Syrian soldiers, which Ariel Sharon had captured specifically to use as leverage. Ilan had been “raised in the early years of the state when no value trumped those of patriotism and sacrificing one’s self for the good of the nation. When the notes hidden in the lining of his clothes were discovered upon the return of his body, Uri Ilan became the new-born modern State of Israel’s iteration of Masada. In taking his own life rather than revealing intelligence secrets, he had done exactly what his nation expected of its sons,” (“This Week in History: ‘I didn’t betray my country,’” The Jerusalem Post, Omer-Man).

Uri’s mother, Ilanit, the granddaughter of renowned Talmudic scholar Shimon Shkop, was active in the Zionist youth organization Hashomer Hatzair and immigrated to Palestine in 1929. There she joined kibbutz Gan Shmuel and became active in the Haganah and the Mapam political party, on whose platform she was elected to the first Knesset, serving from 1949-1951.

As noted at the bottom of our letter, this copy was sent to Minister of Defense Pinhas Lavon (1904-1976) whose covert failed false flag operation in Egypt precipitated the Lavon Affair, which led to his resignation and resulted in Ben Gurion becoming minister of defense just a few weeks after our letter was sent.

Folded with file holes in the right margin. Docketed with a black ink stamp and a few letters written in ink in Hebrew in the lower margin. Lightly age toned. In very good condition. Scarce with such magnificent content.