Coming back from Rome, during my return to Bulgaria to continue there the ministry of Apostolic Visitor entrusted to me by the Holy Father, I was told of Your Majesty’s desire to meet me during Your stay in that city. I was too far from Rome at that time. I would not have been able to reach you. 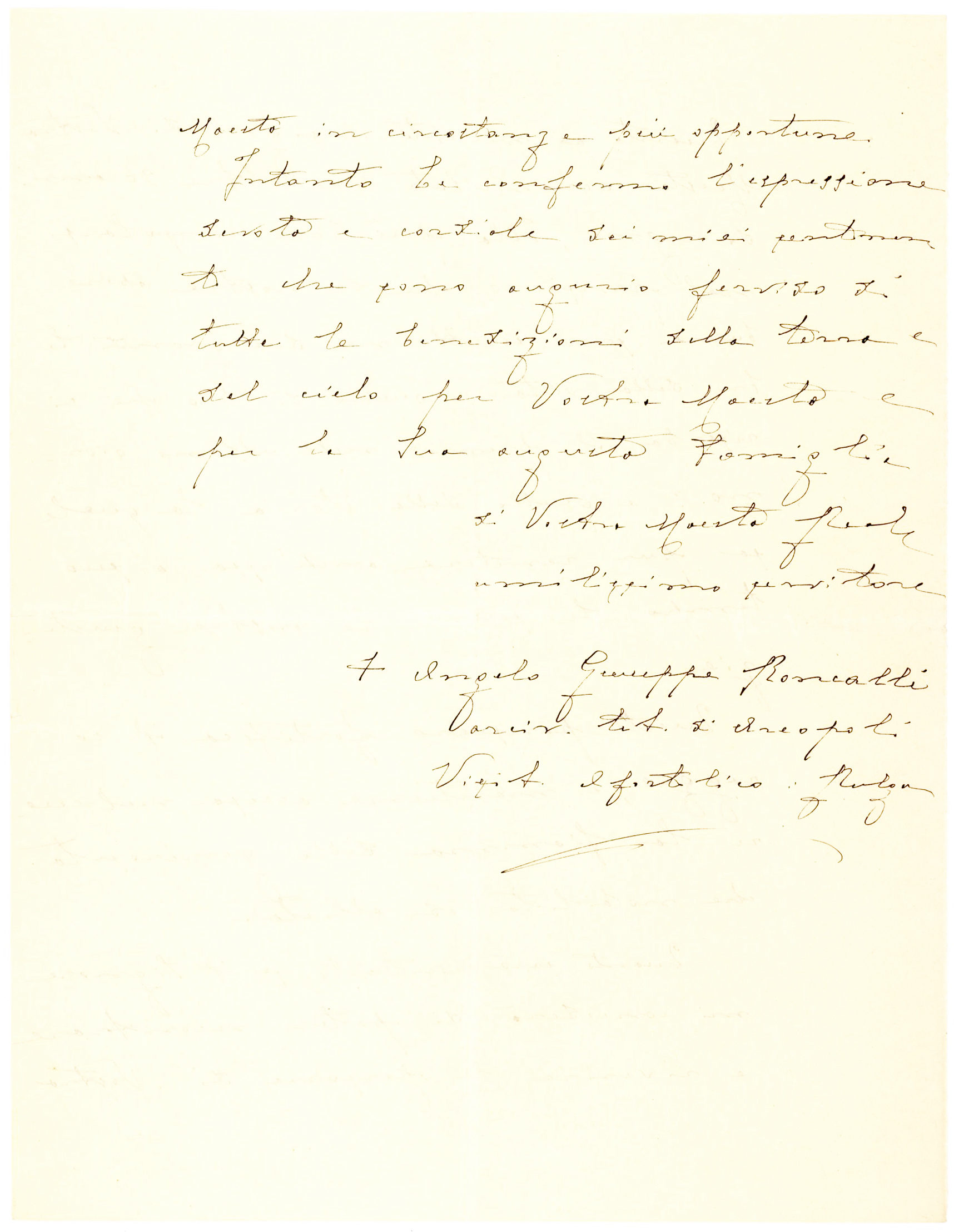 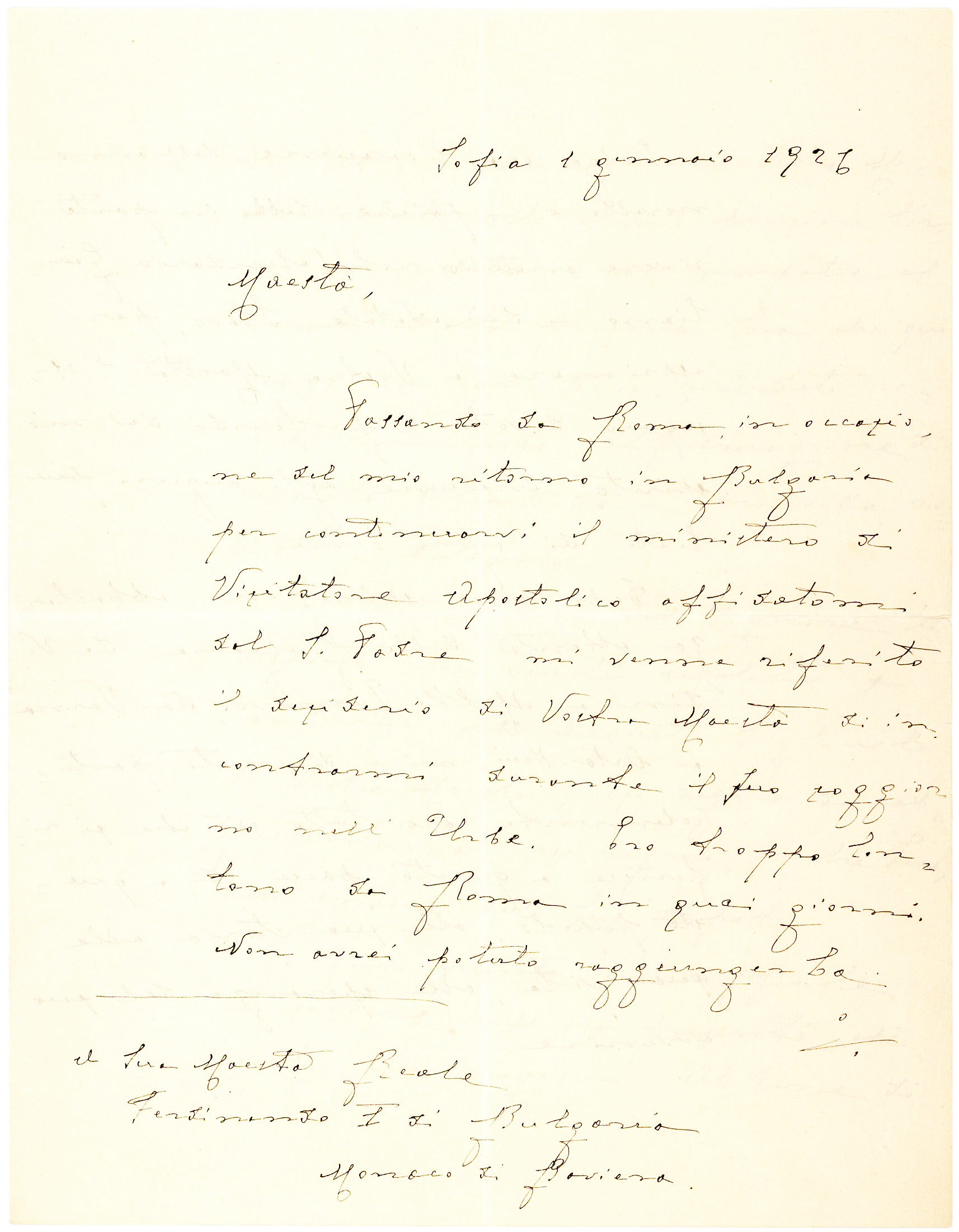 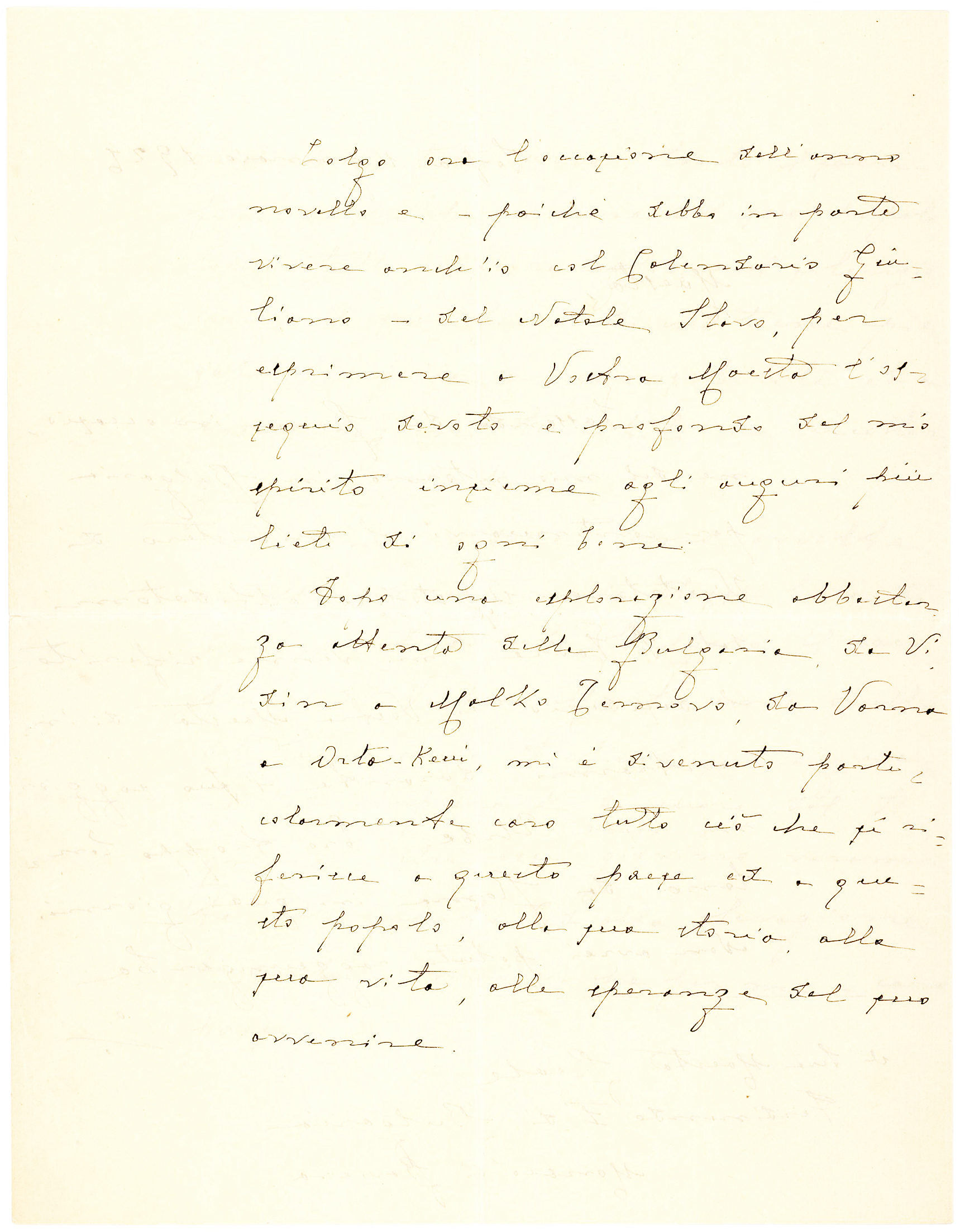 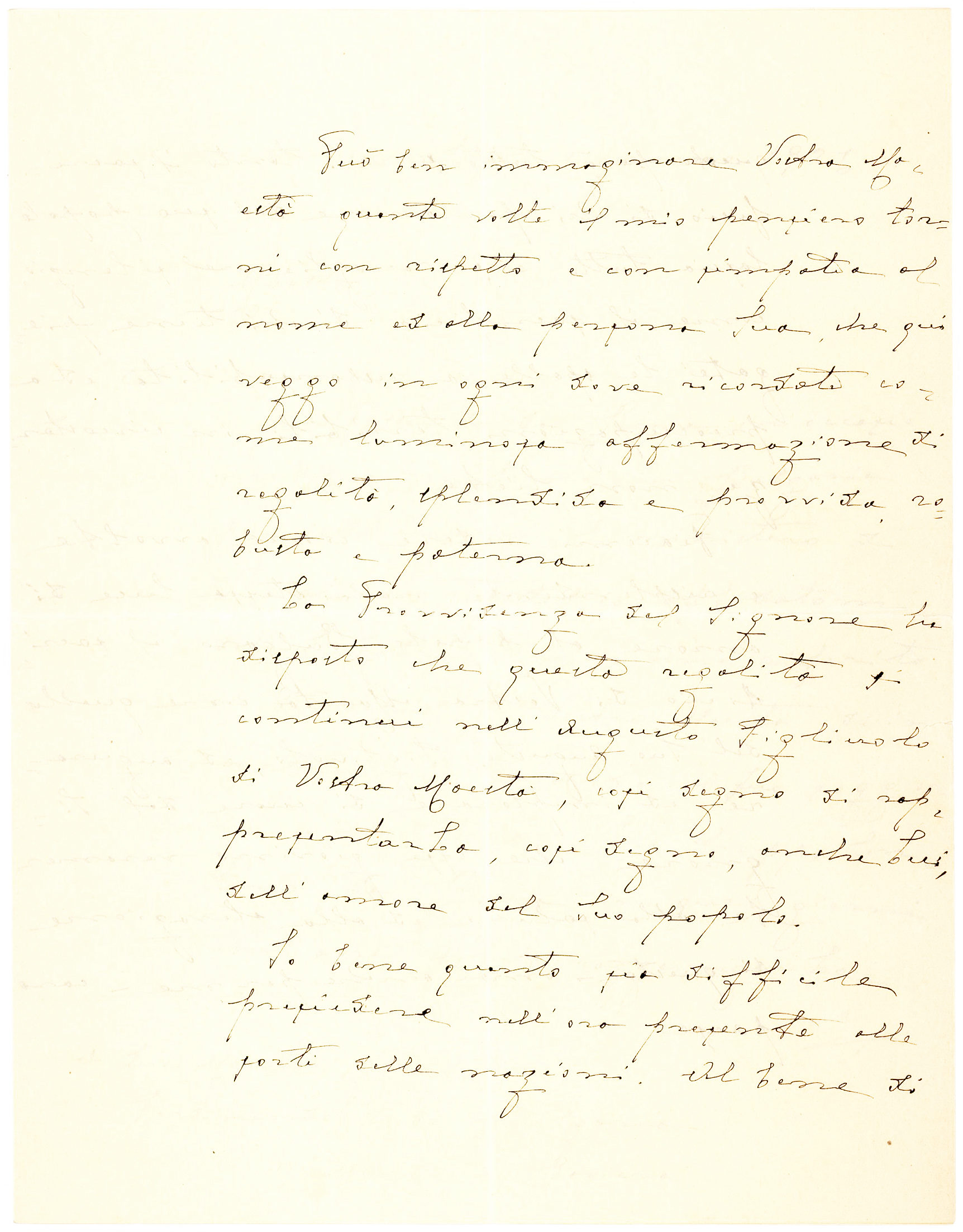 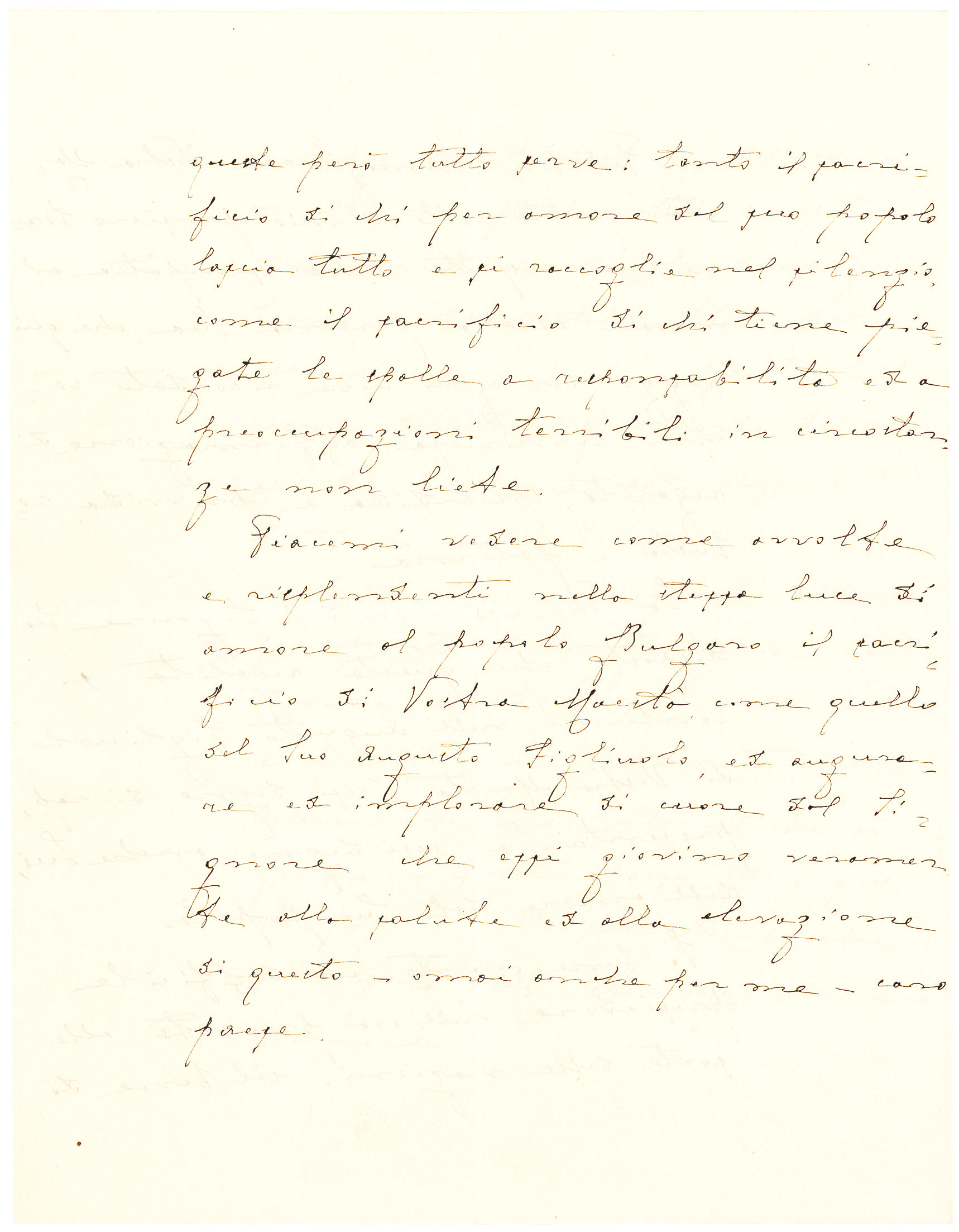 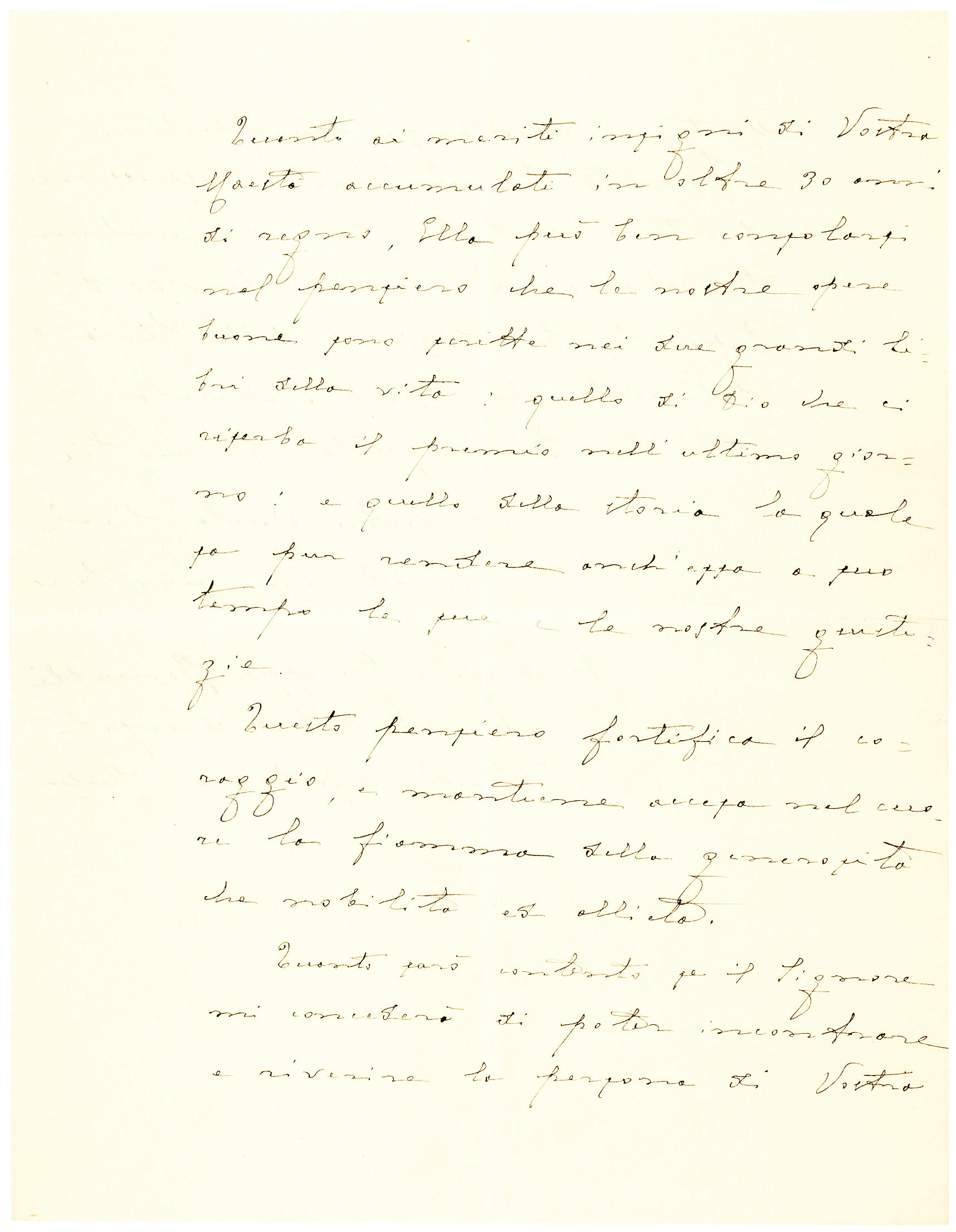 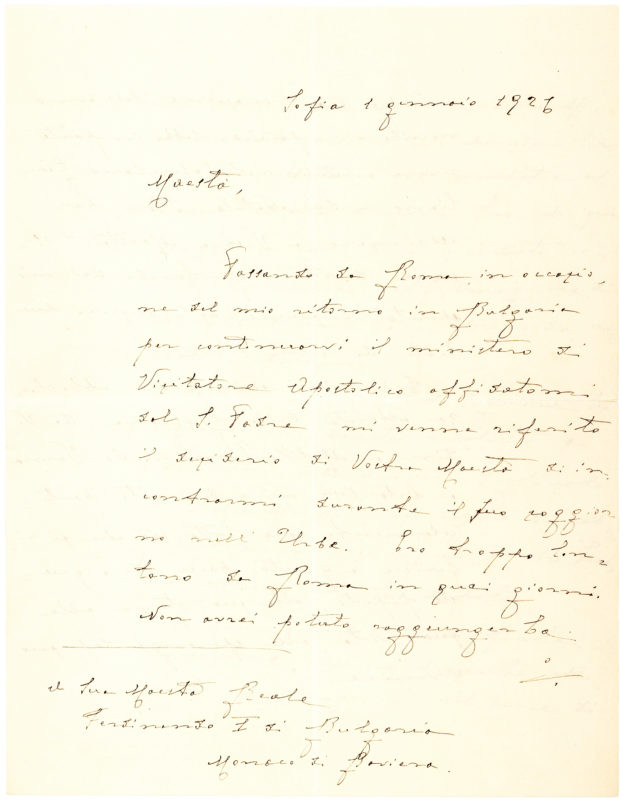 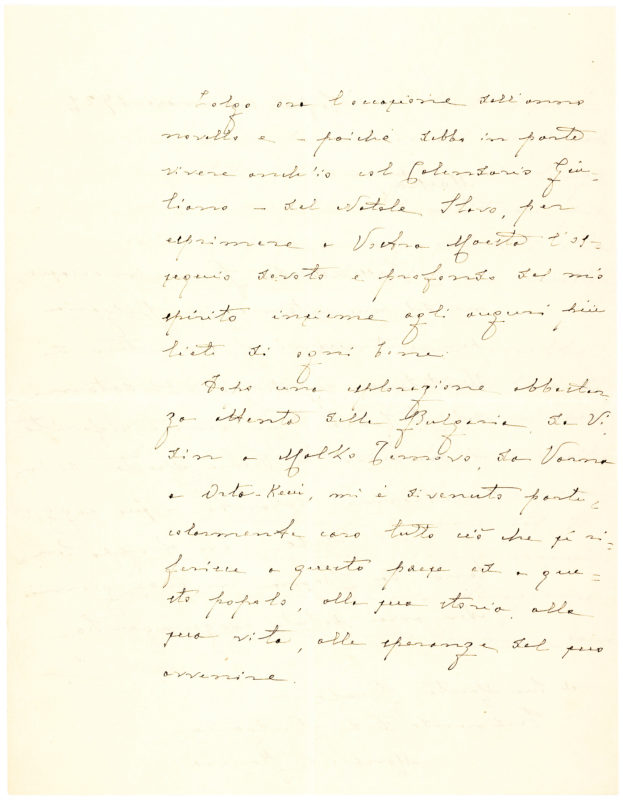 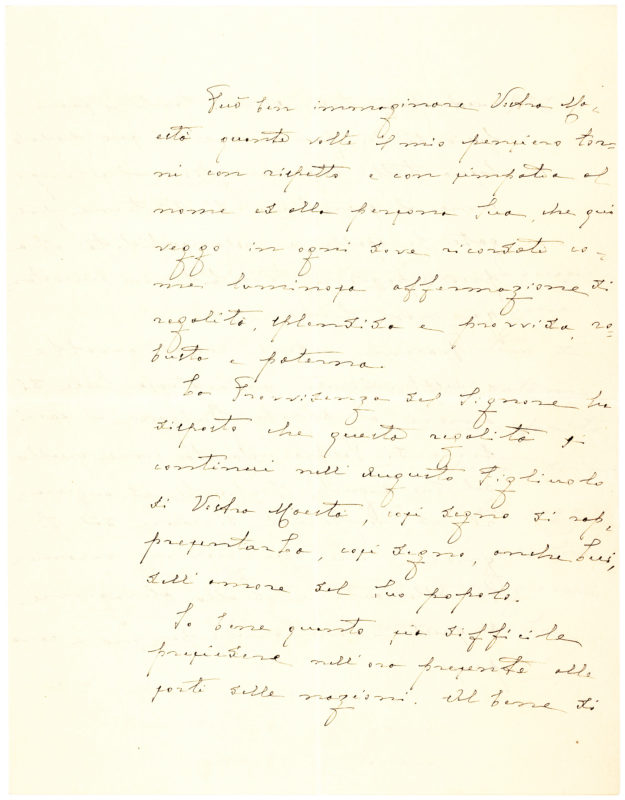 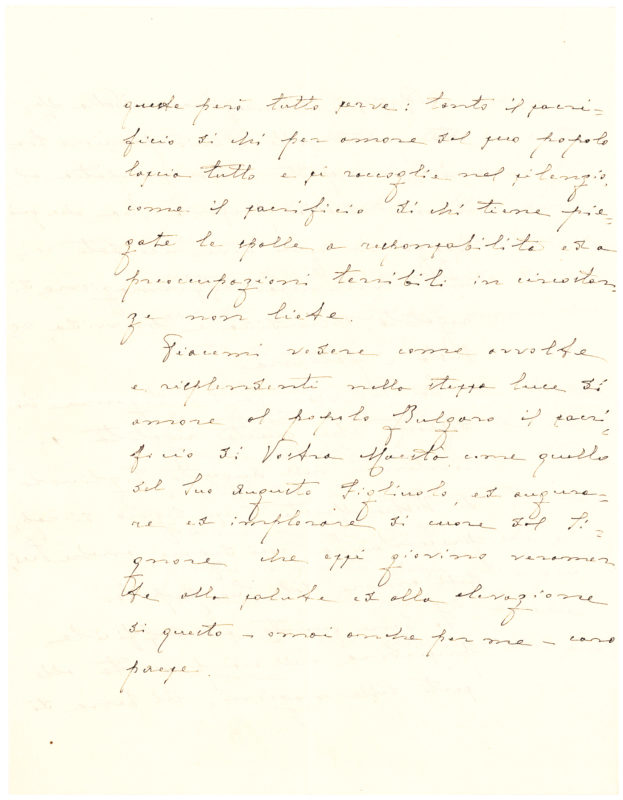 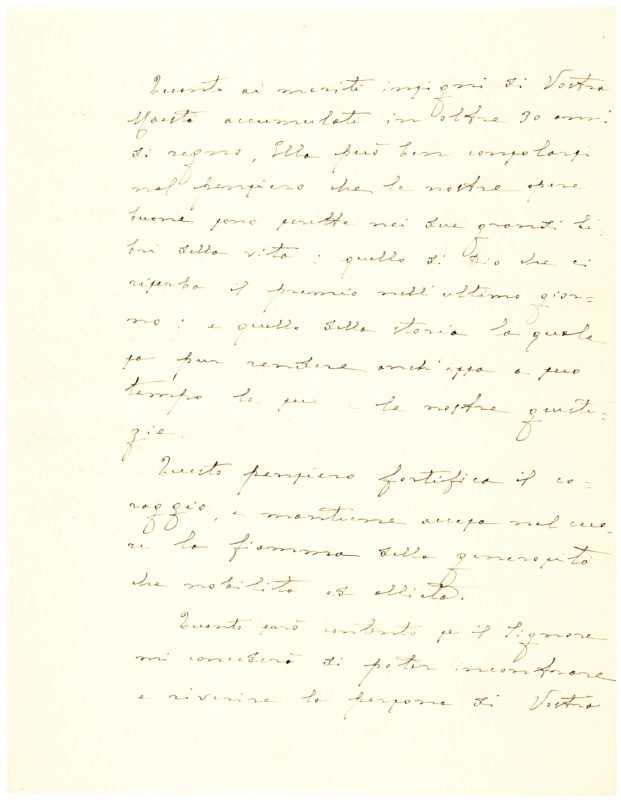 I would like to seize the occasion of the new year – and because I also must in part live according to the Julian Calendar – of Orthodox Christmas, to express to Your Majesty the deep and devout reverence of my heart along with the most joyful good wishes.

After a fairly careful exploration of Bulgaria, from Vidin to Malko-Ternovo, from Vran to Oria-Keui, everything about this county and this people, its history, its way of life, and its hopes for the future has become particularly dear to me.

Your Majesty can well imagine how many times my thoughts turn with respect and sympathy to Your name and person, which here I see in every memory as a shining affirmation of splendid and prudent, robust and paternal regality.

The Lord’s Providence has ordained that this regality is passed on to Your Majesty’s August Son, so worthy of representing You, he who is also so worthy of the love of his people.

I understand well how difficult it is at this present time to preside over the fates of nations. All of this, however, is of help: both the sacrifice of he who for love of his people leaves everything and gathers himself in silence, as well as the sacrifice of he whose back is bent by responsibilities and terrible worries in circumstances that are not joyful.

It gives me pleasure to see how resplendent and enshrouded in the same light of love of the Bulgarian people is both Your Majesty’s sacrifice and also that of Your August Son, and with all my heart I wish and implore the Lord that they promote truly the health and elevation of this dear – now to me as well – beloved country.

Regarding as the illustrious merits that Your Majesty accumulated in more than 30 years of your reign, You may well be consoled in the thought that our good works are written in the two great books of life: that of God in which he has reserved for us the prize of the last day; and that of history which knows also how to yield to it in its time its own and our justice.

This thought strengthens our courage, and keeps lit in our hearts the flame of generosity that ennobles and gladdens.

How happy I will be if the Lord allows me to be able to meet and see again Your Majesty’s person in a more opportune occasion.

For now I can confirm to you the devout and heartfelt expression of my feelings that are a profound wish for all the blessings of earth and of heaven for Your Majesty and for Your August Family. The most humble servant, of Your Royal Majesty, Angelo Giuseppe Roncalli / Tit[ular]. Archbish[op]. of Areopolis / Apostolic Visitor in Bulgaria” 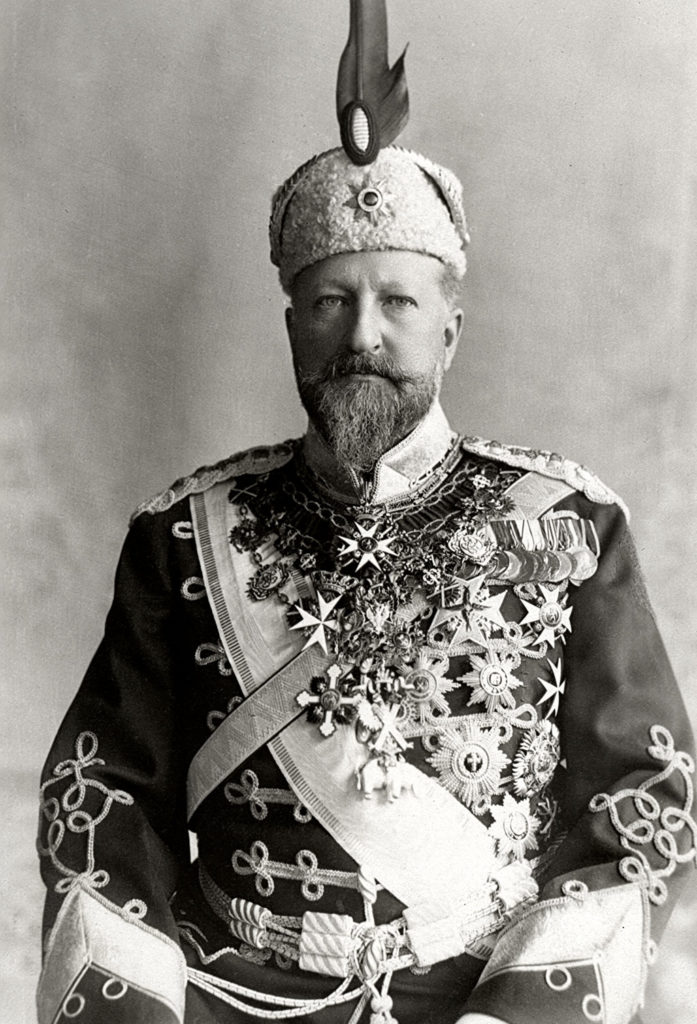 Ferdinand I of Bulgaria

The Principality of Bulgaria, an autonomous state within the Ottoman Empire, was formed after the 1877-1878 Russo-Turkish war, fought between the Ottoman Empire and Russian-backed Serbian, Romanian, Montenegrin, Kurdish, and Bulgarian forces. A Russian-backed coup in 1886 resulted in the Bulgarian Assembly electing as its King, Ferdinand Maximilian Karl Leopold Maria, a German prince from the House of Saxe-Coburg, grandson (on his mother’s side) of French King Louis Philippe I and a cousin (through his father) to Queen Victoria. Despite Ferdinand’s personal friendship with the Russian czars, Russia refused to officially recognize his legitimacy because of his ties with Austria. However, with the 1895 assassination of Bulgaria’s liberal party leader, Ferdinand’s policies became conservative as he aligned himself more closely with Russia, culminating in the symbolic 1896 baptism of his infant son in the Eastern Orthodox Church.

In 1908, Ferdinand announced Bulgaria’s official independence from the Ottoman Empire and declared himself Czar of Bulgaria. After Bulgaria’s defeat in the Balkan Wars in 1913, Ferdinand signed a treaty with the Ottoman Empire and allied his country with the Central Powers in World War I. With Bulgaria’s 1918 defeat and facing the threat of a revolution at home, Ferdinand abdicated in favor of his son, King Boris III (1894-1943) and returned to his native Coburg, Germany, where he remained in exile. With the 1919 Treaty of Neuilly, Bulgaria lost much of its territory in Greece and Macedonia and, in 1920, a democratic government was officially formed. Boris III faced the challenge of retaining power in a constitutional monarchy and, after World War I, Bulgaria was plagued with such issues as widespread poverty, the pressure of war reparations and the ongoing threat of war from Macedonia. Our letter, referring to the difficulty “at this present time to preside over the fates of nations,” was written two and a half years after Boris III was forced to sign off on a right wing coup d’etat.

Born into a family of Lombardy farmers and impecunious nobles, Angelo Giuseppe Roncalli earned a doctorate in Canon Law and was ordained to the priesthood in 1904. He worked as secretary to the bishop of Bergamo, as a stretcher bearer and chaplain in the Royal Italian Army during World War I and as president for the Society for the Propagation of the Faith. In 1925, Pope Pius XI made him a titular archbishop of Areopolis and appointed him apostolic visitor to Bulgaria, a position he held for ten years. 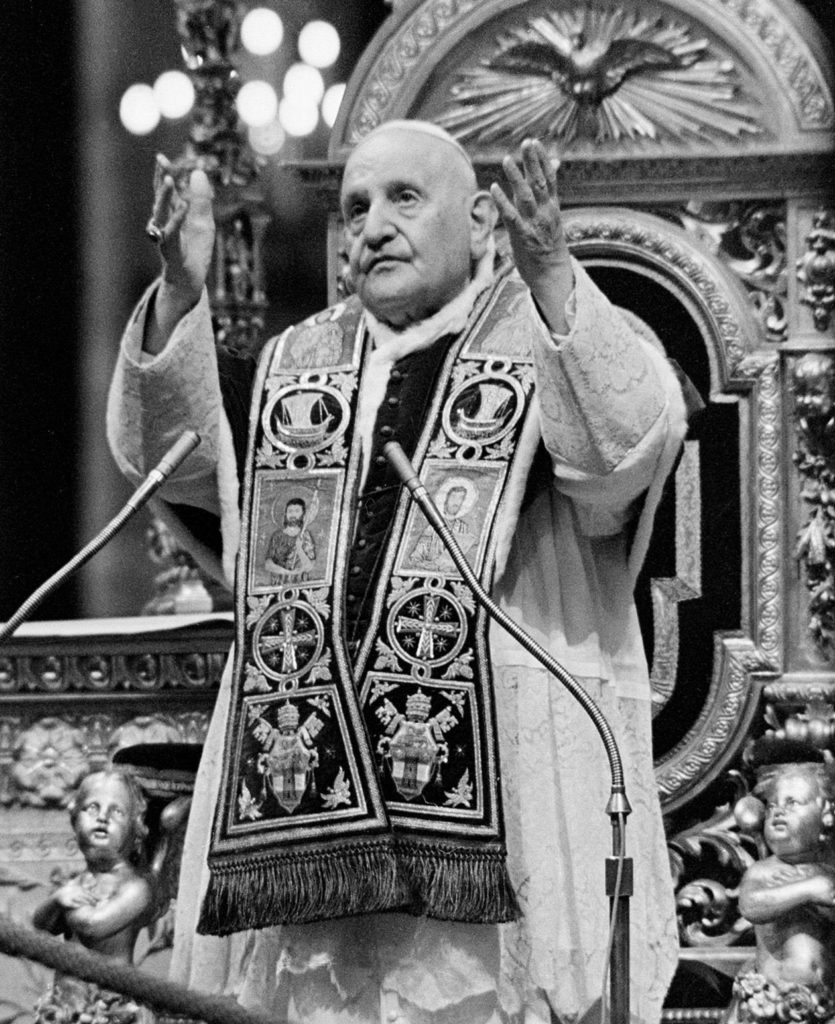 In 1934, Roncalli was made titular archbishop of Mesembria, Bulgaria, and apostolic delegate to Turkey and Greece. As such, he helped Jewish refugees escape Nazi persecution, which included using his influence with King Boris III to halt the deportation of Greek Jews during the Nazi occupation of Greece. “Through [Roncalli’s] intervention, and with the help of Tsar Boris III of Bulgaria, thousands of Jews from Slovakia, who had first been sent to Hungary and then to Bulgaria, and who were in danger of being sent to Nazi concentration camps, obtained transit visas for Palestine signed by him,” (Crown of Thorns: The Reign of King Boris III of Bulgaria, 1918-1943, Groueff). Roncalli’s interventions have been recognized by the International Raoul Wallenberg Foundation.

After its liberation from the Nazis, Roncalli served as Apostolic Nuncio to France where he dealt with bishops who collaborated with Nazi Germany. In 1953, he was made patriarch of Venice and raised to the rank of Cardinal-Priest. With the 1958 death of Pope Pius XII, who had held the post for nearly 20 years, Roncalli was elected his successor. Because of his advanced age, it was speculated that his reign would be short and uneventful. However, Pope John XXIII, as he became known, actively reached out to the youth, the Russian Orthodox Church and to Jews around the world, emphasizing human rights. Most importantly, in 1962, he convened the Second Vatican Council, which radically changed the face of Catholicism. The council, credited with modernizing the Catholic Church, emphasized Christian unity and outreach to other Christian and non-Christian faiths, increased participation of the laity, shifted away from the Latin mass to mass held in vernacular languages, and made other significant changes to the liturgy and liturgical calendar.

By far, he earliest, longest, and most important letter of Pope John XXIII ever to be offered for sale. Written on all four pages of a folded sheet and the recto and verso of an additional sheet. In extremely fine condition and accompanied by the original typed envelope bearing Roncalli’s coat of arms, with the Latin motto “Obedience and Peace,” printed in green. Of great rarity. 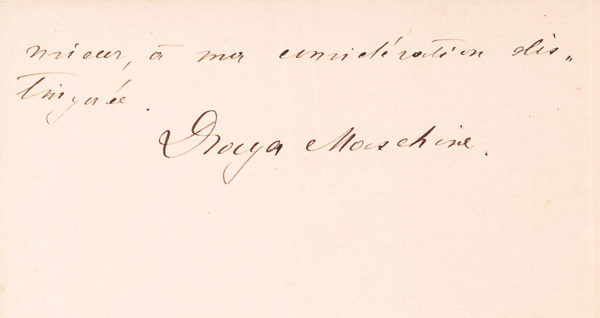 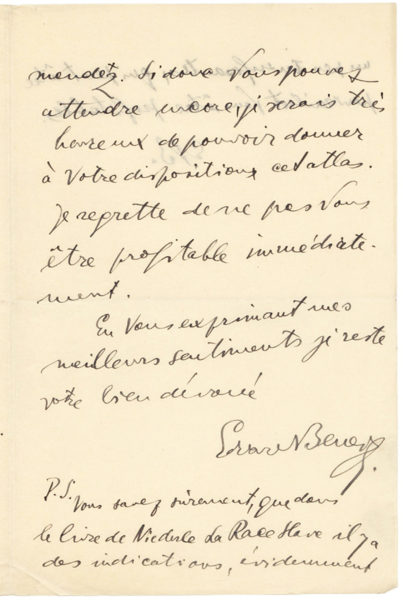