Inscribed Cabinet Photograph by the 75-Year-Old Liszt to the 21-Year-Old American Violinist Arma Senkrah, Whose Violin Was Later Owned by Isaac Stern

LISZT, FRANZ. (1811-1886). Hungarian-born composer and pianist. SP. (Twice: “F. Liszt”). 1p. Imperial Cabinet. Weimar, July, 1885. A fine sepia photograph by Louis Held of the elderly composer playing the piano. Signed on the recto and inscribed in French on the verso a year before his death to American violinist ARMA SENKRAH (ANNA LORETTA HARKNESS) (1864-1900), “affectionately” from “the too old ex-pianist…”

From 1839-1847, Liszt toured “the whole of Europe, from Ireland to Turkey, from Portugal to Russia… This was Liszt’s most brilliant period as a concert pianist: he was adulated everywhere and honors were showered on him,” (The New Grove Dictionary).

In 1847, Liszt met Princess Carolyne Sayn-Wittgenstein who was to have an immense impact on his life and work, including convincing him to abandon his career as a piano virtuoso and pursue composition. Having served as conductor of the Weimar court orchestra since 1843, Liszt followed the princess’ suggestion to give up touring and settle in Weimar in 1848 and conduct the orchestra full-time. 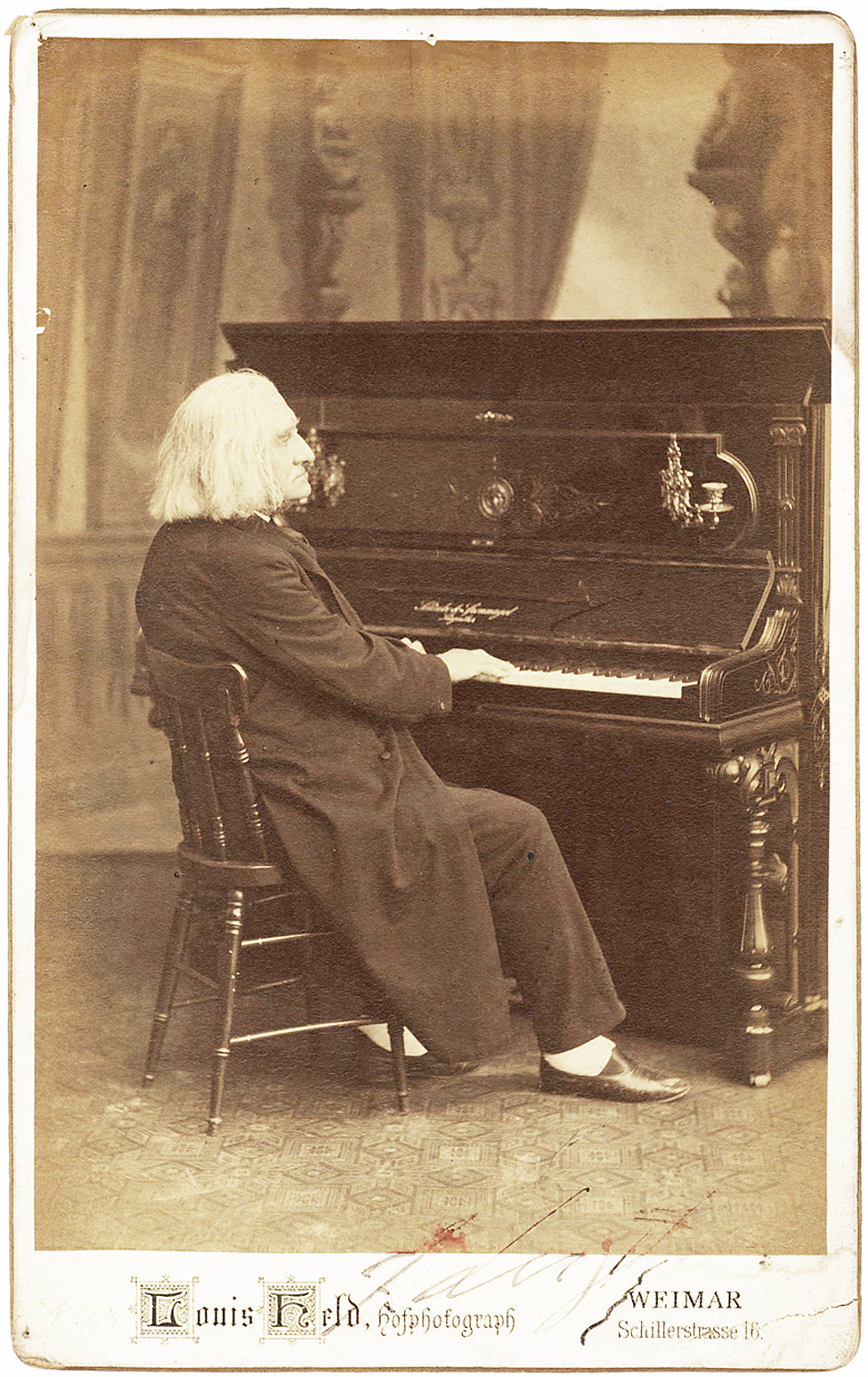 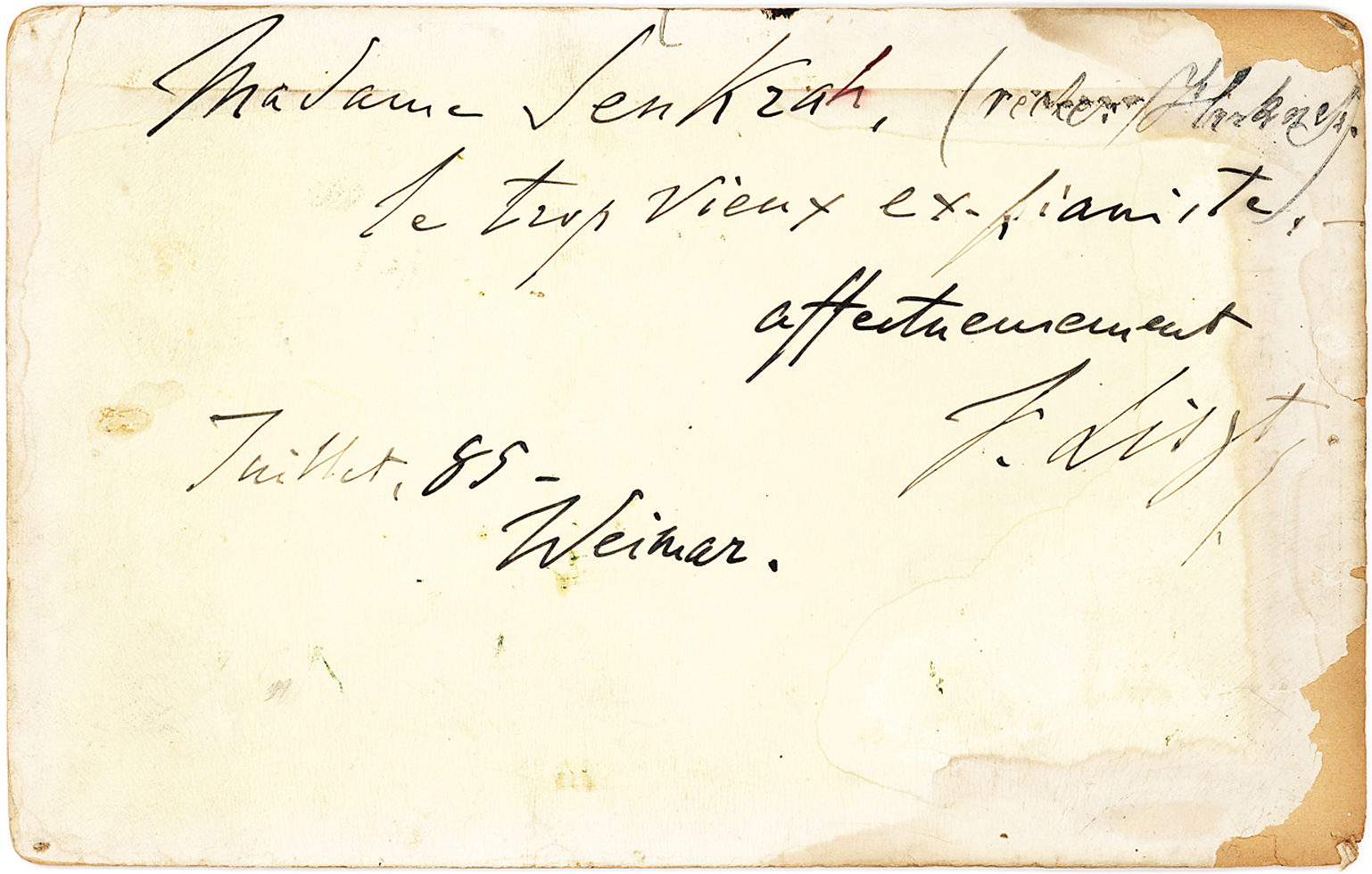 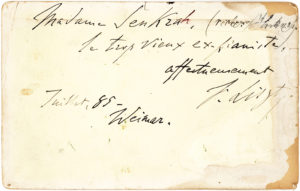 In his final years, Liszt divided his time between Rome, Budapest and Weimar, where, in the summer of 1885 (the same period as our photograph) he met and became fond of the 21-year-old Harkness who was touring Europe under the name Senkrah, a near anagram of her family name. The pair publicly performed together on several ocassions and she toured throughout Austria and Hungary with several of Liszt’s pupils. In 1888, Senkrah became a chamber virtuoso in the Grand Ducal Court Orchestra in Weimar, but comitted suicide two years later. In addition to her virtuosity, Senkrah is remembered for her fine 1750 Guadagnini violin, known as the Arma Senkrah Guadagnini, once owned by Isaac Stern. With several pin holes and damp staining, which affects the signature on the recto. Light staining and paper loss on the verso, and a weak lower right corner. In good condition. A rare association.

Inscribed Cabinet Photograph by the 75-Year-Old Liszt to the 21-Year-Old American Violinist Arma Senkrah, Whose Violin Was Later Owned by Isaac Stern 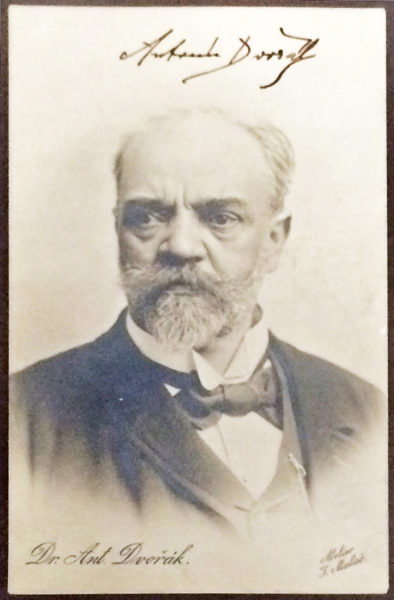 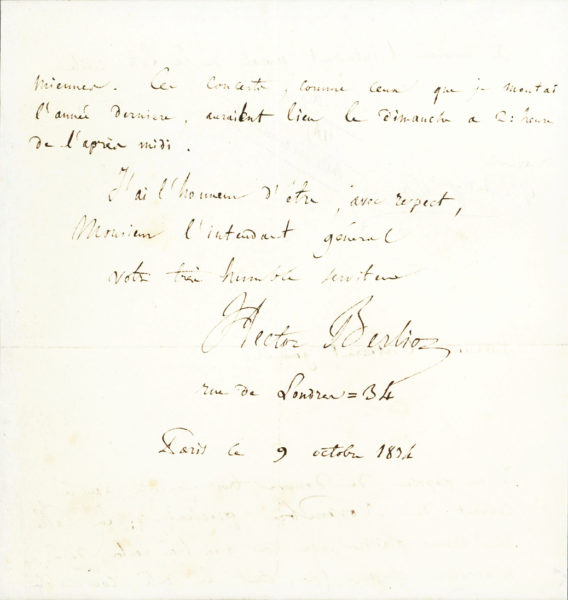